Two years ago I discovered the joy and the thrill of the board games category on Kickstarter. I went crazy, backing everything I thought looked remotely interesting. Of those dozen or so games I backed at the tail end of 2015, only 2 are still in my collection, and one of those is Dino Dude Ranch. I received my copy at the beginning of 2016 and promptly fell in love.

Dino Dude Ranch is a light family game where players run their own dino ranch and collect resources like leaves, fish, and meat. They use those resources to lure dinosaurs from the Jurassic Hunting Grounds board to their personal ranch board. Each player is also trying to collect specific combinations of dinos to fulfill a secret goal. The player with the most points at the end of the game wins. You can read my full review of Dino Dude Ranch.

But we’re here to talk about the upcoming first expansion for Dino Dude Ranch, adorably titled Hatchlings. It launches on Kickstarter tomorrow! So crack open the shell…I mean box…and see what’s inside!

So What’s New in Hatchlings?

Hatchlings is an additive expansion in that we’re not replacing anything from the base game, but are instead adding new elements: new Hired Hands cards, Rancher Bonus cards, a new breed of dino, and the star of the show…the Hatchlings. Let’s take a look at each of these new additions then talk about how they affect gameplay. 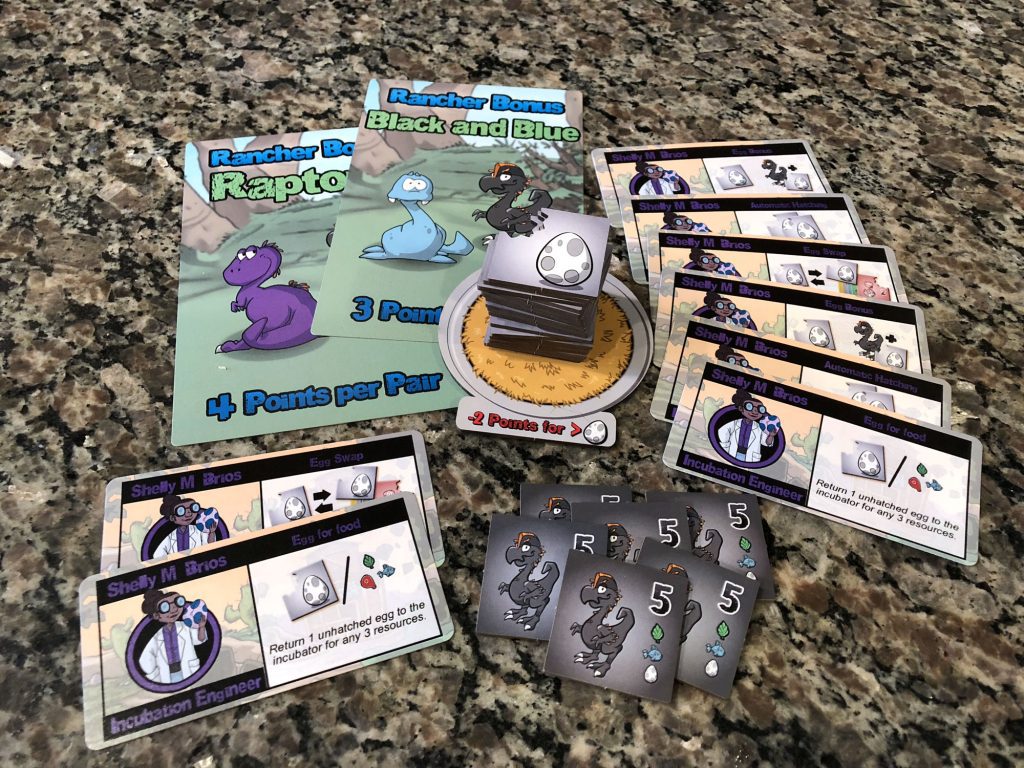 Hired Hand cards give you special one time abilities and bonus points, each centered around a specific worker. Now the Jurassic Hunting Grounds have a new Hired Hand, an Incubation Engineer named Shelly M. Brios. She’s laser focused on these new Hatchlings and will give you all sorts of help when working with those eggy eggs.

The Rancher Bonus cards do double duty: one side is a secret objective that will earn you extra points at the end of the game, while the other side is a handy dino reference card. Two new cards include the Oviraptor in new combinations like Black and Blue, and Raptors.

This new dino gives a new answer to the “chicken and the egg” joke since with this dino around there would BE no egg. Luring the Oviraptors away from the Jurassic Hunting Grounds will be extra difficulty since you must pay an unhatched egg in addition to a leaf and a fish. 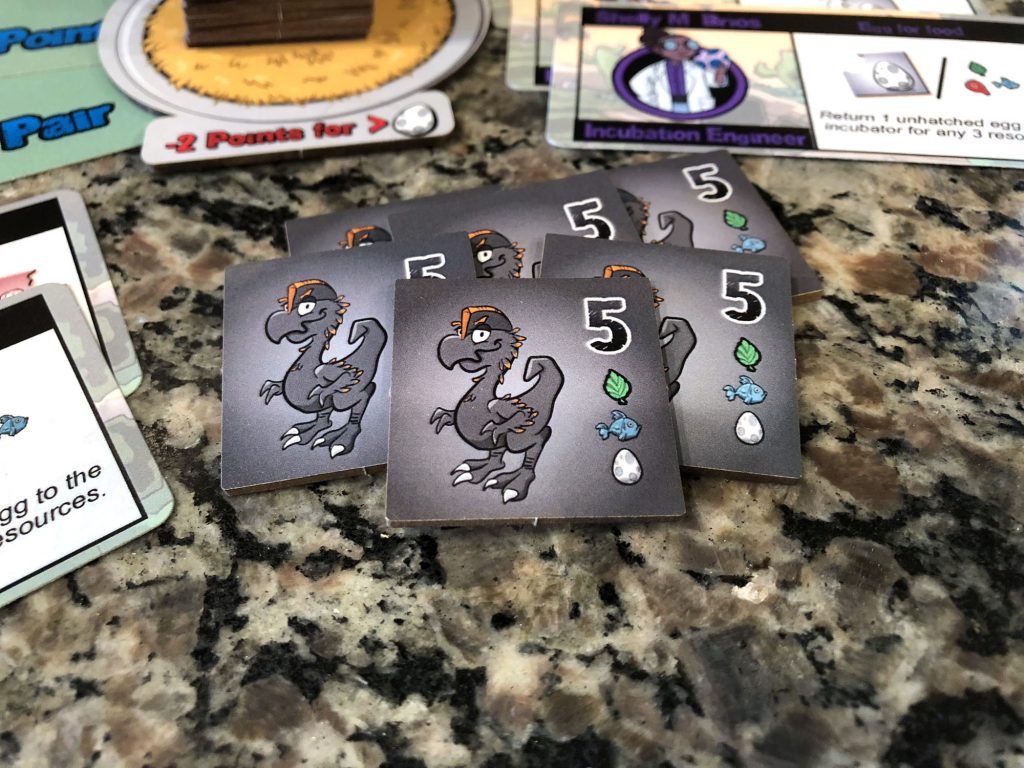 The star of the show, and the primary game changing mechanism, are the Hatchlings. These tiny dinos hang out in their nest, waiting for someone to adopt them. One side of the tile is an egg and the other is a mini version of one of the dinos already in the game. When you bring them to your ranch, they occupy a space until you have a match to an adult dino also in your ranch. At that point you stack them on top of the adult dino and you gain additional points. The tile had a cute little knockout in the shape of a bite mark, super clever addition. Note that it’s possible to match a Hatchling to an adult dino as soon as you bring them to your ranch, if you’re lucky. 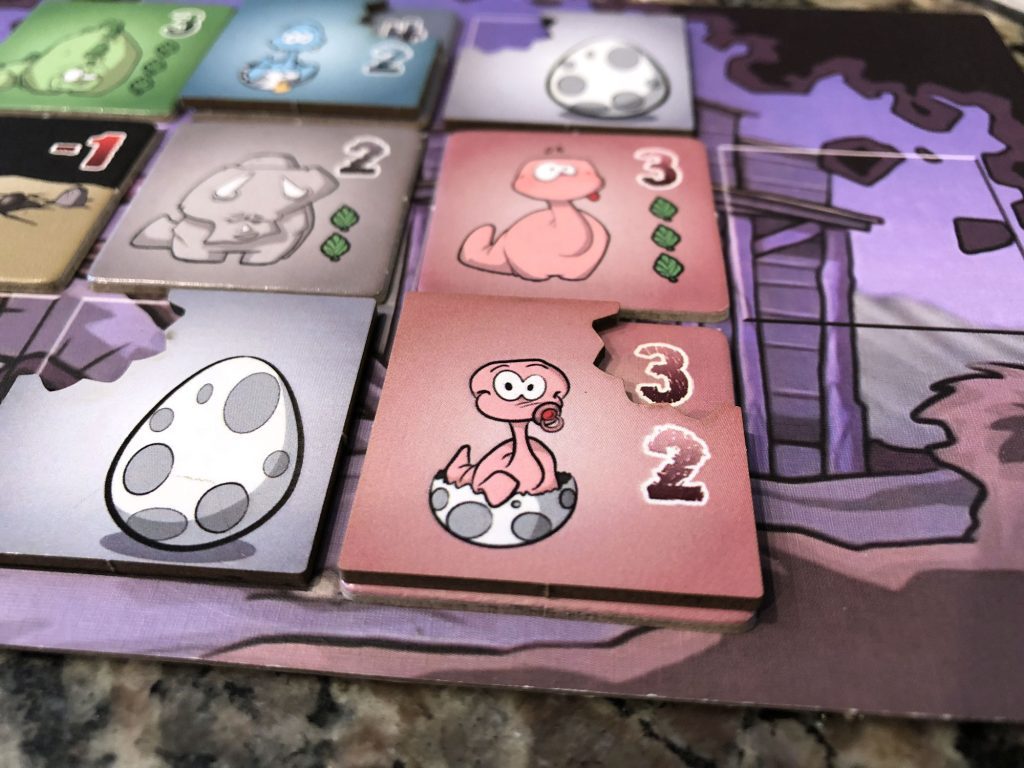 Bringing a Hatchling back to your ranch is an optional addition to your turn. Pay a leaf and pick the top face down tile from the Hatchlings nest. Pay a fish and you get a choice of two, keeping one, and a meat will let you choose from 3, keeping one. Not only does this allow you to score extra points, but it helps you do something with those “singleton” resources. Previously everything in the game cost at least 2 resources.

So why not just buy lots of Hatchlings? Two reasons: They’re only worth points if you match each Hatchling with an adult dino, and the player with the most unhatched eggs at the end of the game actually loses two points. 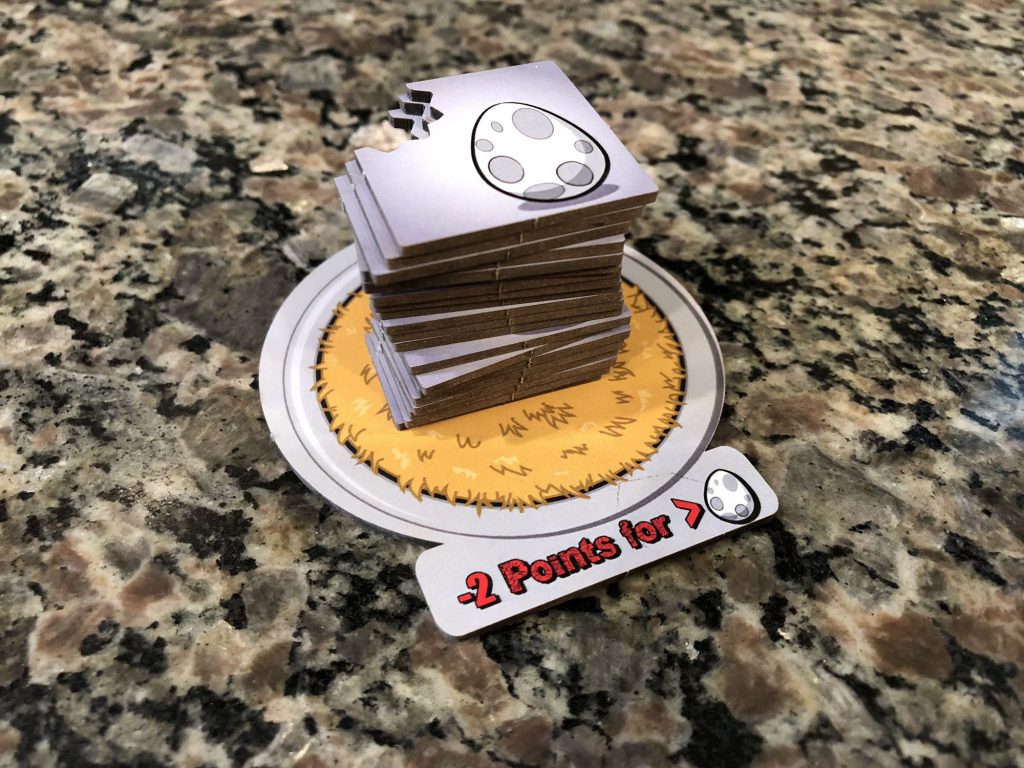 My only comment is that the designers should consider including a key on the nest tile with a reminder of how many egg tiles each resource allows you to draw. Not a requirement, but would prevent you from having to refer back to the rules.

Thoughts About The Hatchlings

The components are the same as the original game, with the same art style and quality. Well made, durable, and colorful.

Some expansions let you mix and match pieces, but the new additions from Hatchlings are an all or nothing affair. The Rancher Bonus and Hired Hand cards require Oviraptors and eggs, as do the Oviraptor themselves. That said I don’t see any reason not to include this new content in every game.

These new components are delightful, and a great addition to Dino Dude Ranch. Having lots of Hired Hand cards can’t be underestimated, and the new Rancher Bonus cards are nice too. Although I’m curious about the Raptors card. The Velociraptor cards were a Deluxe addon for the original Kickstarter. I have them because I decided to purchase the upgrade after the fact, but what about the people who didn’t get it? That card is worthless to them now.

I like the inclusion of the Oviraptor dino tiles. Not only are they thematic, but they offer an additional challenge of ranch management, and planning ahead. You have to already have an unhatched egg, and then you wait for and Oviraptor to show up. So you’re trading the possibility of points from your egg, for guaranteed points from the Oviraptor, and regaining a spot in your ranch.

Finally, the Hatchlings tiles themselves are simply delightful. The way the designers chose to have them interact with the base dino tile is super clever, and just darned cute. Even though the adult dinos are all the same point values, the Hatchlings themselves vary, among the same color Hatchlings. This means that you’re not guaranteed to have a point advantage when you have the same number of dinos of the same values.

All in all, this is precisely what a good expansion should include. New content that enhances the original game without getting in your way, or being too obtrusive. Dino Dude Ranch was one of my top family games of 2016. I was already really happy with the base game, and The Hatchlings expansion simply makes a good thing even better. If you own Dino Dude Ranch, then The Hatchlings expansion is a must have. If you don’t own the original then you should pick it and the expansion up at the same time in this Kickstarter.