Andy Matthews @commadelimited
Add Comment
Join us in our exploration of space as we review Wormholes from Peter McPherson and AEG.

Back in 2019 I read the book The Long Way to a Small, Angry Planet by Becky Chambers. It’s the story of a group of friends who all live aboard the wormhole tunneling ship, the Wayfarer, many, many years in the future. It’s short on “heavy sci-fi” but packed with futurist technology, culture, food, and interesting relationships between alien species. The Wayfarer’s job is to connect far-flung planets and solar systems to each other by means of wormholes; a lucrative but semi-dangerous profession. The book was enjoyable in a deep and heartfelt way—I truly wanted to be friends with the crew—and has gone on to become one of my favorite books of the past 4 or 5 years.

That same year I played Tiny Towns, a game from first time designer Peter McPherson, and one that I immediately loved for its colorful wooden components, breezy playing time, and simple ruleset. We’ve interviewed Peter twice on Meeple Mountain, once back in 2019, and once again at the beginning of 2022 where he revealed he was working on a game called Wormholes.

Wormholes is a peaceful spacefaring game about warping around a galaxy via wormholes. It’s a route-building game that has players flying to distant planets to set up their wormhole network and deliver passengers.

See where I’m going with this? So we need to ask ourselves, is Wormholes a good game? And just how much did The Long Way to a Small, Angry Planet influence Peter’s design? 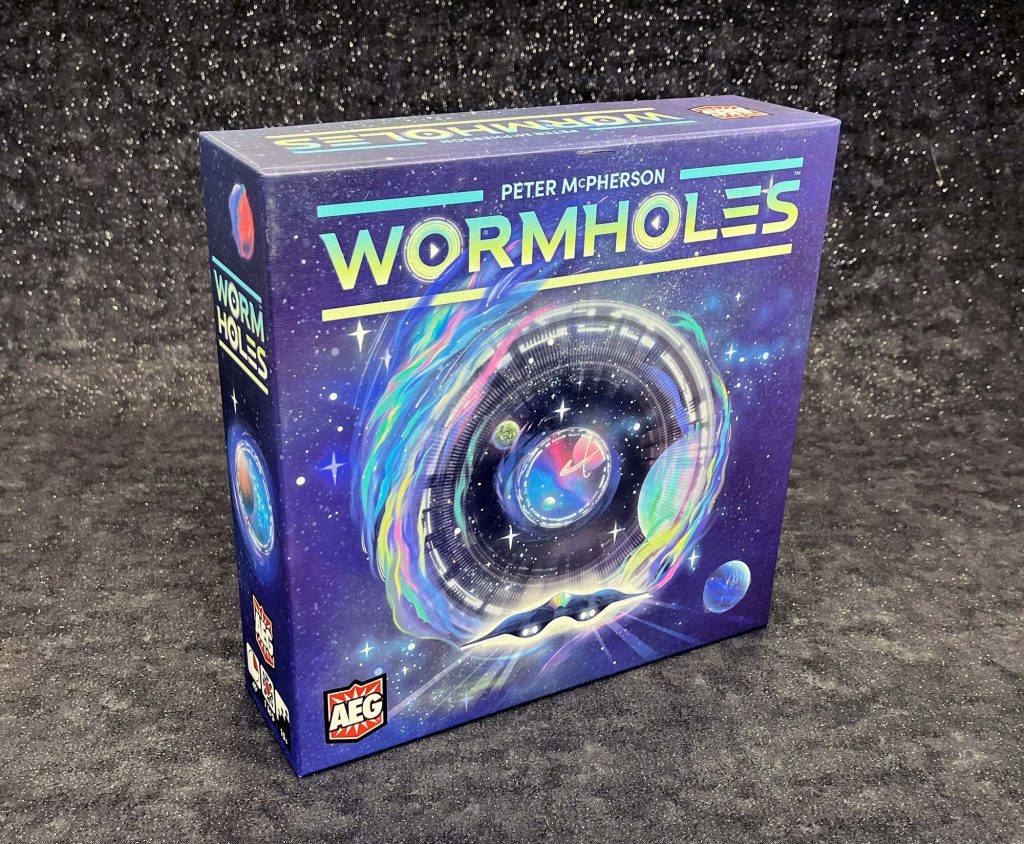 “It’s time to bend space and go fast.” In Wormholes you are the pilot of a passenger ship whose job is made all the easier by being able to fabricate wormholes which connect widespread stretches of intergalactic space. As you fly from planet to planet, you’ll be able to pick up and drop off passengers, create wormholes which you and other players can leverage to speed up your travels, all the while striving to become the best pilot in the galaxy.

The goal of Wormholes is to earn the most points, which you’ll get for: being the first player to construct a wormhole next to each planet, other players using your wormholes, delivering passengers to their desired destinations, and a final bonus for dropping passengers off at more than five different planets.

A Turn of Wormholes

Wormholes is fairly simple to set up, with a nifty modular board featuring multiple planets, and a single space station. The size of the board is dictated by player count. You start with your ship token and 10 double-sided wormhole tokens in numbered pairs 1-5. You’ll also grab some energy markers to help keep track of your moves, and a starting set of passenger cards. 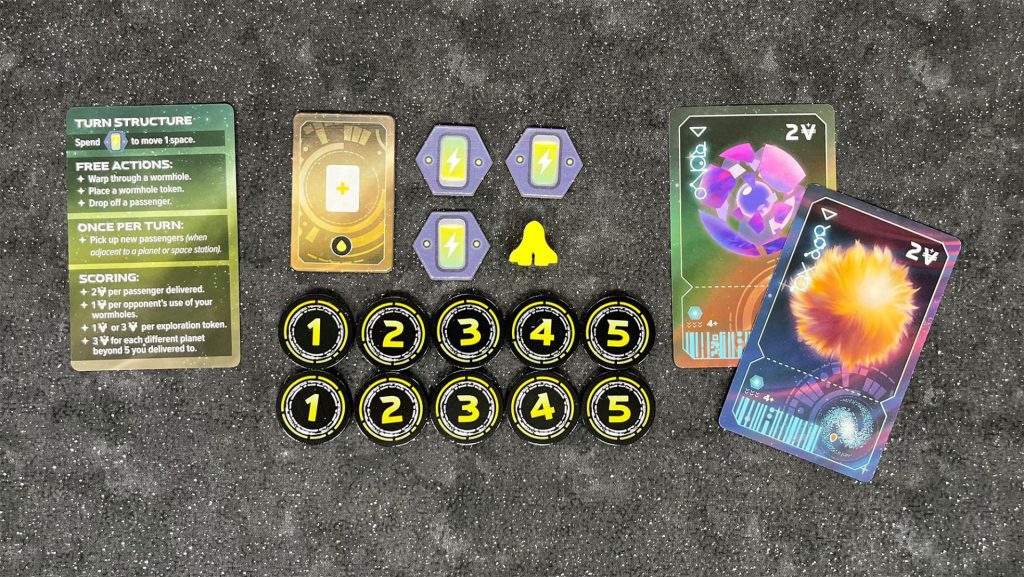 One of the things I enjoy about Wormholes is that there are lots of things you can do on your turn, many of which require none of your energy tokens. In fact, there are more free actions than not. Let’s take a look at the sorts of actions you can perform.

Since every player starts at the space station, your first action will likely be to move. Moving from one hex to the next costs 1 energy token and is the only action which costs energy, although there are some ways that experienced pilots like yourself can stretch out that movement. For example, moving into orbit around a planet lets you stop anywhere in that orbit. You can also move through any number of nebula spaces at the cost of a single energy token. Since you only have 3 energy tokens, you’ll need to combine actual movement with free actions to maximize your turn. 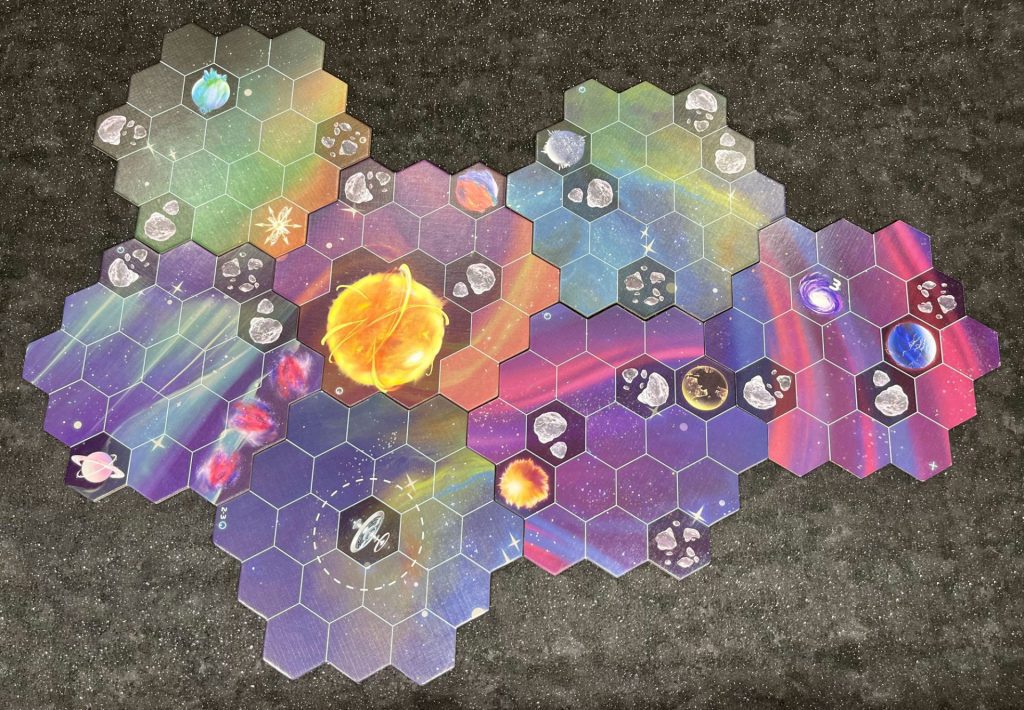 Picking up and delivering passengers are both free actions, and will be where you’ll get the bulk of your points—you should do it as often as you can. Each time you stop near a planet, you can deliver passengers from your hand to their matching planets. You can then pick up passengers from that same planet, up to a hand size of four, by drawing passenger cards from the deck. Dropping off passengers can be done multiple times in a turn, while picking up can only be done once. 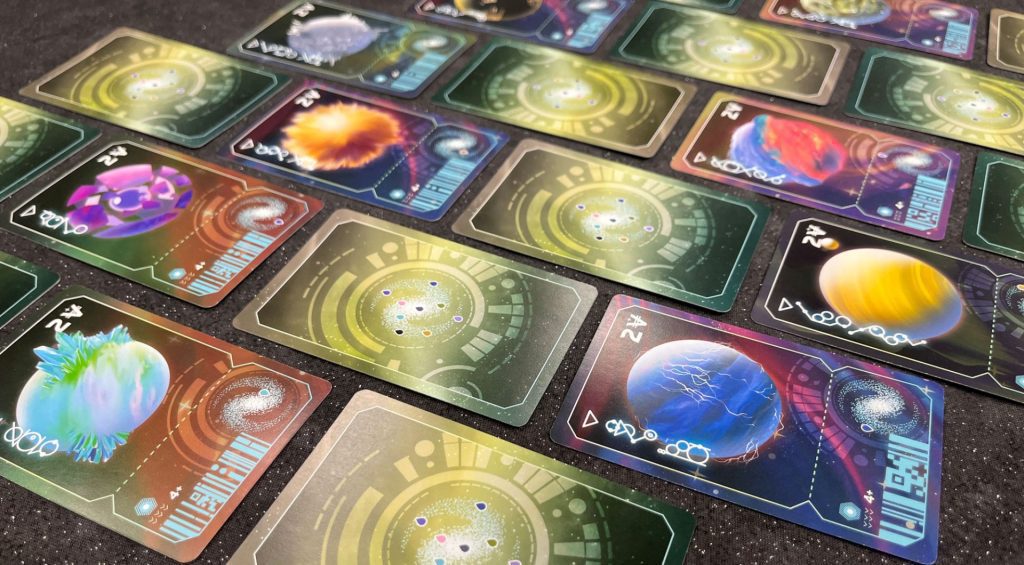 When drawing passenger cards, if you happen to draw a passenger card for the planet you’re currently orbiting, that card goes face up into a public tableau by the space station. Any player visiting the space station can select face up cards instead of drawing from the deck. This is a nice option since you can drop off any number of passenger cards as a single action and ganging up multiple passengers to the same planet is peak efficiency.

Building a wormhole is your next likely action, and one which makes your travels much easier. At the beginning of the game, you will have stacked your wormhole tokens face down in ascending order, meaning the pair of “1” tokens is on top and the “5”s are on the bottom. To build a wormhole, simply drop the topmost token onto any hex that isn’t already occupied. This is a free move and can be performed at any point in your turn. If that token is the second one of the pair, then you get to activate the wormhole by flipping both tokens to their colored side. If you’re the first player to build a wormhole next to a planet, you’ll receive an exploration token which will earn you between one and three points. The exploration tokens not only earn you points, but also act as the game timer (more on that in just a moment).

Finally, you can move through wormholes—while the travel between entrance and exit is free, moving onto or off the wormhole will cost you an energy token.

You’re now free to move about the galaxy.

During setup you’ll construct a stack of exploration tokens (based on player count), along with 3 “round countdown” tokens (numbered 3, 2, and 1), and a single “planets connected” token which, when displayed, triggers the end of the game. Once all the exploration tokens have been taken, the “planets connected” tile is revealed, which means all planets on the game board have adjacent wormholes. All players then have three more turns, indicated by the “round countdown” tokens. Once all players have finished that third and final turn, players will tally up their scores. The player with the most points wins the game.

While I’ve only played 2 games thus far from Peter McPherson, they really resonated with me in ways many other games haven’t. First off, they’re just fun to play, with a simplicity that belies the strategy built into each title. In Tiny Towns, players place a single cube into a 4×4 grid based on the blueprints available to all players: that’s it. But the complexity comes in planning far enough ahead that you can avoid becoming boxed in and not able to complete any buildings. Peter has a second game coming this year, Fit to Print, a tile laying game where you’re trying to assemble the front page of a small town newspaper which also looks to have that innocent vibe with some hidden complexity.

Wormholes has a similar feeling to it. You can move, build a wormhole, or pick up / drop off passengers, and three of those four actions are free to do. The game just has an innocence about it—it’s not a game about galactic conquest, or building up the biggest fleet, or becoming the most powerful clan on Mecatol Rex. It’s just a game about doing your job to the best of your abilities.

At its heart, Wormholes is a racing game where you try to do as much as you can before the end of the game. You’ll be racing to pick up passengers, hoping to get good card draws and wind up with double drop offs to the same planet. And you’ll race to be the first to a planet so that you can build a wormhole there and get an exploration token, even though you know that with each such token collected, the end of the game is that much closer.

Wormholes is a relatively light game, which isn’t to say that there isn’t strategy. The most important thing is to build a solid network of wormholes, hopefully adjacent to wormholes from other players. If properly placed, you could potentially make it all the way across the board in a single turn. Wormholes really rewards players who can think spatially, in terms of routes. Additionally, you can take advantage of “map features”, some of which I’ve mentioned before. In addition to the nebula spaces, there are also photon cannons which can shoot you as many spaces in a straight line as you wish to go, even through otherwise impassable spaces like asteroids and planets. There are also wild wormhole spaces which correspond to player wormholes and allow you to jump out of your matching wormhole.

Passenger management is perhaps the key to the game. Each passenger is worth two points on their own, but if you’re able to build your route properly you can travel all over the board dropping off passengers at different planets and collect an extremely lucrative bonus: three points for each planet you visit over five planets – and since there are 10 planets in a 4-5 player game that could net you an extra 15 points. Our games have ranged between 28 and 51 points so an extra 15 points could make or break your game.

All in all I think that Wormholes rockets through its goal: to be a fun, interesting, and non-confrontational family-weight game that doesn’t overstay its welcome. So just how much was Peter influenced by the book? Here’s what he had to say from our interview about being inspired by The Long Way to a Small, Angry Planet.

It’s one of my all-time favorite books, written by the talented Becky Chambers, and it wasn’t until my 2nd read that I thought “this wormhole network thing sounds like a game design.” The inspiration ends there, but I was really drawn to this idea of making a wormhole from planet A to B and B to C, then hopping through those wormholes to link up C to A.

Now head out into space and build some wormholes of your own! 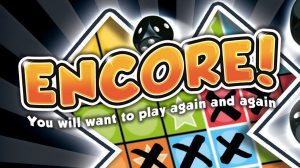 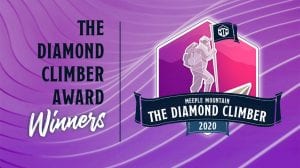 Join us as we announce the winners of the Meeple Mountain 2020 Diamond Climber Awards.