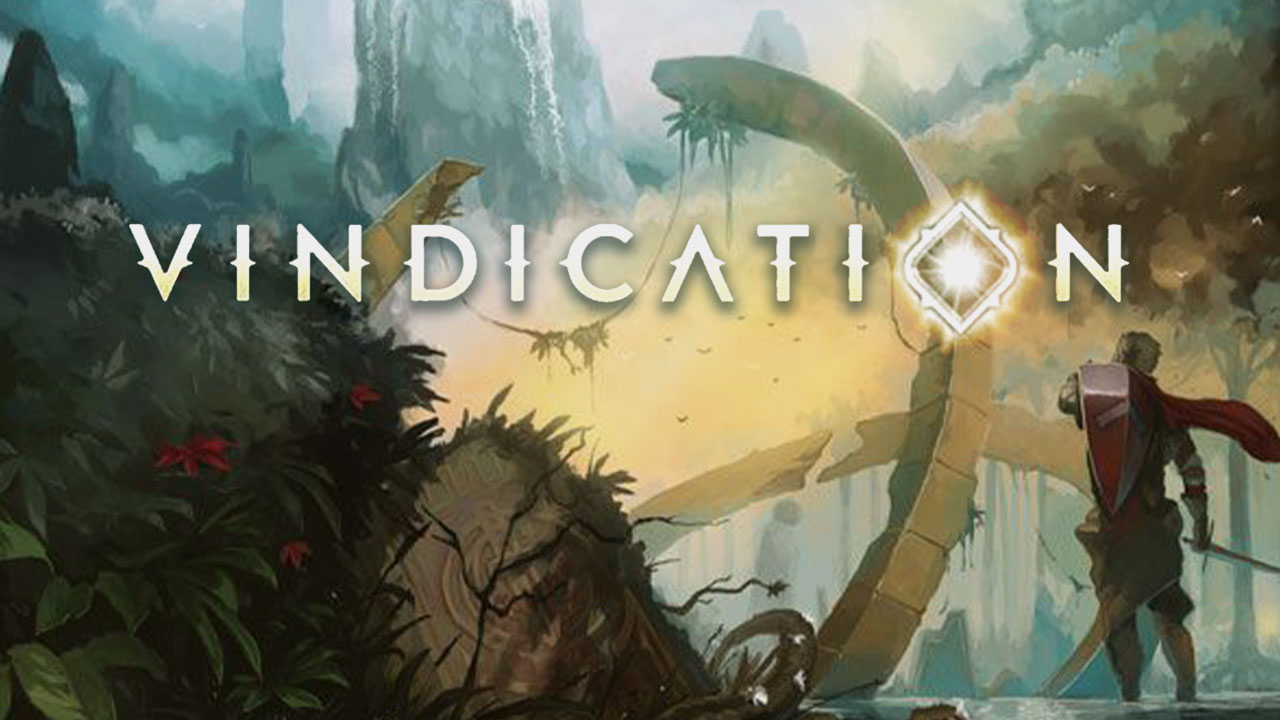 With unique area control mechanics and a plethora of endgame triggers, each game of Vindication feels like a new journey into the unknown. Check out our review to see if Vindication’s mystique lives up to the hype.

On a particularly fateful voyage, your past crimes have caught up to you. After living a life of greed, excess, and general wretched behavior, you’re tossed into the sea, only to wash ashore on an undiscovered island ruin. Your riches have been taken from you, as well as every worldly possession you own. All that is left is you and the mystical island. Now you have a second chance to rebuild your lost legacy, but this time, with honor.

Vindication is a 2-5 player fantasy strategy game with a plethora of mechanics. Through area control, exploration, and resource management, you compete against other players with the goal of having the most honor at the end of the game. What the “end of the game” looks like may change depending on certain cards or in-game events, and your strategy to get to the end can vary wildly, depending on which combination of over 72 ability cards you collect. In Vindication, it’s all about choosing the right set of companions and abilities to help you become… well… vindicated.

From Wretched to Revered

Gameplay in Vindication is centered around three simple actions on your turn and you may perform then in any order. You must perform a move action, a visit/rest action, and an activation action. Moving is simple — you move across the hexes on the board a distance up to the speed of your personal mount. If you pass any unrevealed spots, you will draw a tile from the deck and place it, building the board as you go. Visiting and resting has you making a choice between visiting an adjacent tile on the board and paying its attribute cost to gain its bonus or resting, which allows your character to augment power on your character’s personal player board. Finally, activate means you must either use the ability of your own personal character or one of the companions you can pick up along your travels.

Augmenting power is the core mechanic in Vindication. On your personal player board, you will have three separate pools for your power tokens, a little like the bowls of power in Terra Mystica. The first pool, “potential”, represents inert power that cannot be used. By resting or visiting a monastery tile, you may move potential power into “influence”, which may be spent to activate companion abilities, gain attributes, or charge a relic card. Finally, any power augmented past “potential” becomes “conviction”, which allows the player to perform strong actions like controlling portions of the map or performing an empowered draw action. 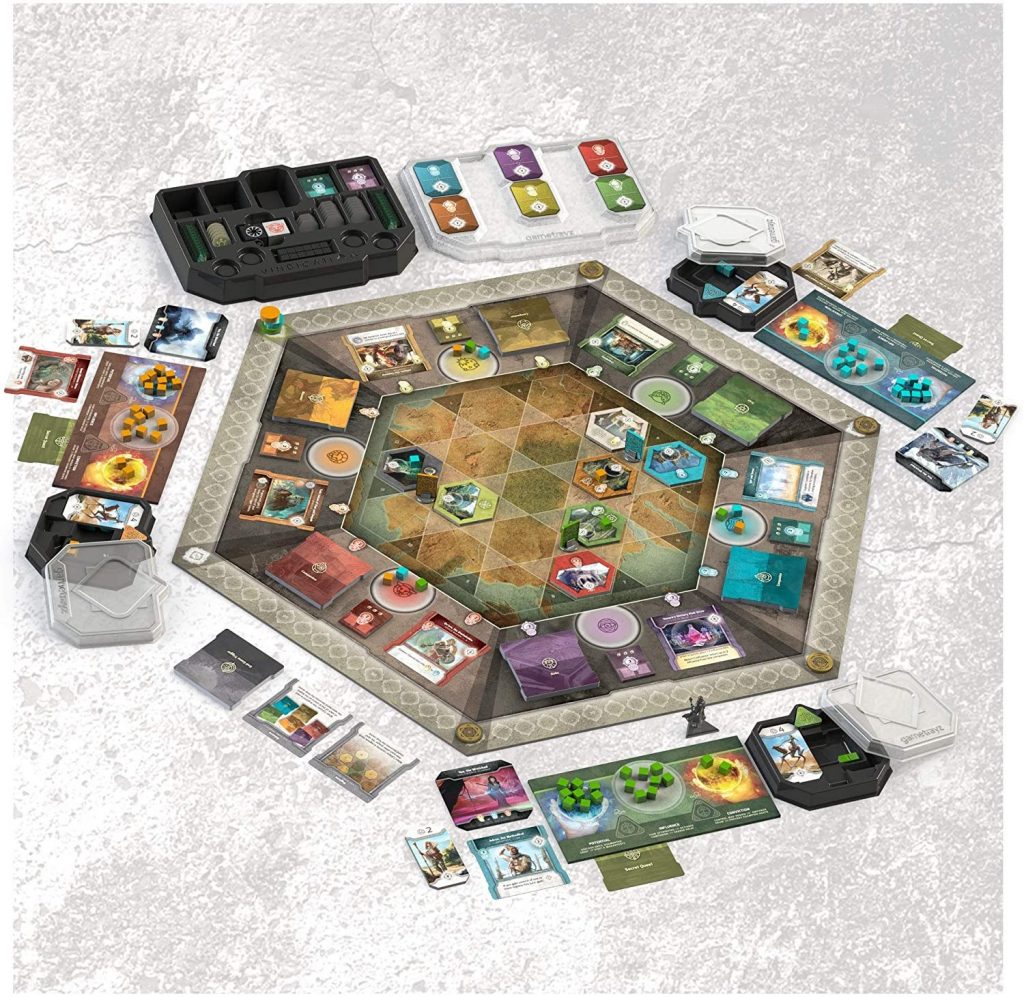 Through these simple, easy to understand actions, the game is able to introduce the most strategic depth in how it doles out companions, relics, traits, and monster battles. The more advanced and powerful cards require attaining more powerful attributes. Thus, Vindication begins to feel a little bit like an engine-building game, where you’re slowly acquiring more power to raise your attributes to obtain cards that synergize with what you already have so that you can start going off and earning more and more honor points each turn. Slay the monsters, get the magical items, and watch the honor roll in… until it all comes screeching to an unexpected halt.

One of the most unique things about Vindication is that there’s no set endgame trigger at the start of the game. The game comes with a deck of endgame trigger cards that are randomly shuffled. As players proceed through the game and gain honor, more endgame triggers will be added at certain thresholds. At any point, if one of those endgame trigger conditions is met, the game ends after the following round, ensuring everyone has the same number of turns. Some of these triggers are public from the early game, but because some are added later in the game, it keeps all players on their toes. These triggers could be everything from defeating a certain number of monsters, upgrading your mount speed, or controlling a certain number of areas. There are multiple ways to gain honor, so players must balance whether to go all-in on a particular strategy or try to diversify their tactics to easily adapt in case a new endgame trigger pops up. While the unique endgame triggers add variety to Vindication, they can also be one of its biggest stumbling blocks.

The first thing you’ll notice when you open Vindication’s giant box is that there’s a lot of stuff. There are roughly a dozen different decks of cards plus several player boards, game tiles, monster miniatures, coins, tokens, and dice. The quality of these components is top-notch, making it really feel like it’s worth every penny. The metal player medallions that come with the game are up there among the best feeling game pieces I’ve ever handled. While it may seem like a lot of stuff, this “Swanky” version of the game also comes with upgraded game trays that neatly store everything away. Each tile, coin, and token has its proper place in a game tray (made by Game Trayz), complete with a snug-fitting plastic lid to keep things from shifting around during storage. It’s one of the more impressive storage solutions I’ve seen included in a game box. 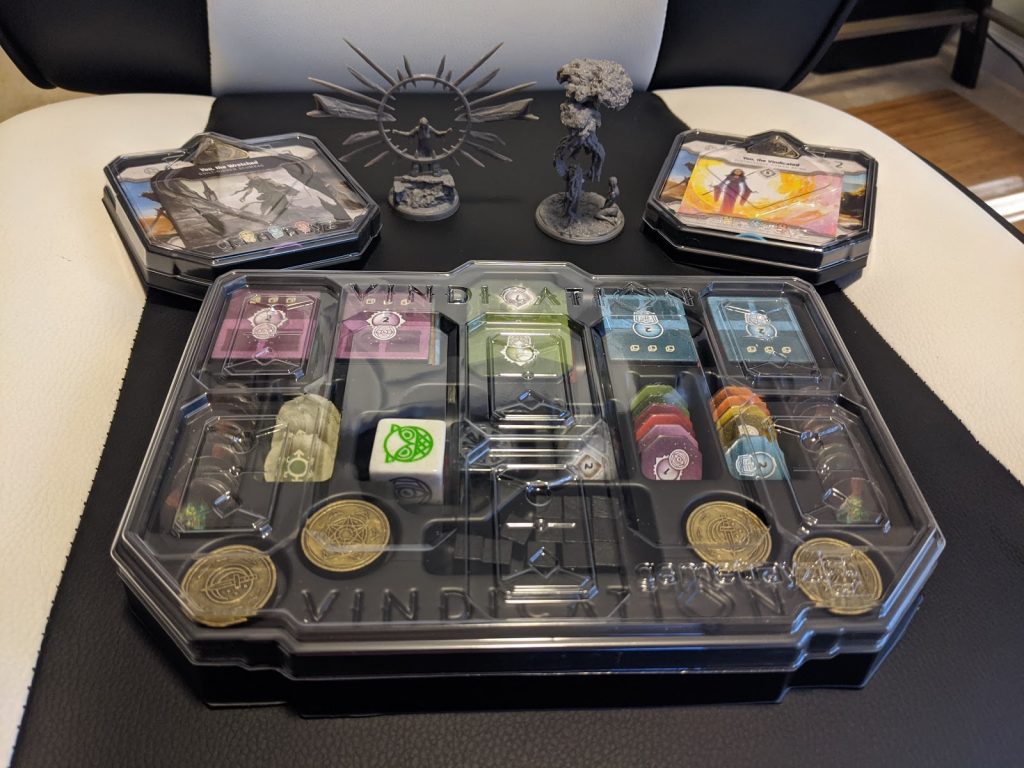 Once you get past the sheer functionality of it all, you can start to appreciate the art of Vindication. Each tile is gorgeously detailed and shows off a unique fantasy landscape. The board itself is designed with functionality in mind, having appropriately marked areas to place every game component, making setup a breeze. Upon playing this for the first time, we already had most of the game set up without reading the rules just by following the board’s visual design cues. The miniatures that are included are hefty and feature intricate details.There’s even a special artbook that also serves as a deeper dive into the lore and world-building of Vindication. The rulebook is designed to be more of a “visual guide” with its own artwork and design to help immerse you in the world. It’s impossible to deny the extreme amounts of love and care that went into this game… and it shows.

Vindication feels correctly paced. It doesn’t take too long (15-30 minutes per player), and the rate at which you acquire new powers and abilities feels right. From my testing, it scales well at multiple player counts. It’s gorgeous to look at, the pieces are all fantastic to hold and use, and it stores away in a pretty box. It feels wonderful when you nail a synergistic combo and start accumulating honor quickly. So… why did it feel good, but not great to play?

In the games my group completed, we enjoyed the early and middle portions of Vindication. You get to start building an economy and having fun, but then the randomness sets in. Maybe you’re not getting the cards you need to have your combo work or maybe you’re just not finding the right companion for your crew. If you happen to be someone that gets prickly around randomness in games (much like this reviewer), then you’ll be sure to have that moment of exasperation when you still can’t find the right card to help your engine really take off. Even if randomness doesn’t bother you, though, there’s something about the way the endgame scoring trigger happens that feels a bit anticlimactic.

The joy of engine-builders comes from watching your engine slowly climb and fire off and do what it’s supposed to do. It’s a delicate dance to keep it humming away efficiently without stalling out and falling to pieces. I’m reminded of Food Chain Magnate, where one or two wrong turns can cripple your engine and ruin it. In Vindication, though, you are at the mercy of what cards you draw or which cards have been discarded, since you have a choice between face-down or face-up. In the event you do get an engine going, the fact that a new endgame trigger could be added out of nowhere and trigger the final turn can sometimes fall a bit flat as if your fuel tank has suddenly run dry.

That being said there’s a lot to love about Vindication. If randomness doesn’t bother you, this may wind up being one of your all-time favorites. While we did not play with any of the included expansions, they add interesting new mechanics, like treachery cards to interfere with other players, new regions with new actions, crystal forging, and the ability to recruit permanent pet companions. There is a ton of game content in this box and it’s all a joy to look at and behold. It’s rare that such a hyped-up Kickstarter campaign absolutely nails the execution, but Vindication is the exception to the rule. It should be held up as an example of how to craft a game with passion and attention to detail and deliver an immersive, gorgeous experience. I just wanted to enjoy it a little more than I did.