You know when you find something and it just immediately replaces something else in your life that fills a similar role? I’m talking about something that you were happy with, but then you came across something else that just did the job better? Something that made you think, “there’s just no looking back now!”

In the board gaming community, many people can relate to this idea of games “firing” other games that feel or play similarly. (Just check out this Geek List on Board Game Geek if you don’t believe me!) I’ve always understood it to some extent, conceptually, but I just couldn’t relate. For me, finding a game that feels similar, whether thematically or mechanically, was an opportunity to celebrate the differences that made each game unique. Though I might prefer one over the other, you’d find me hard pressed to say that one makes the other “obsolete.”

Or at least I used to think that… 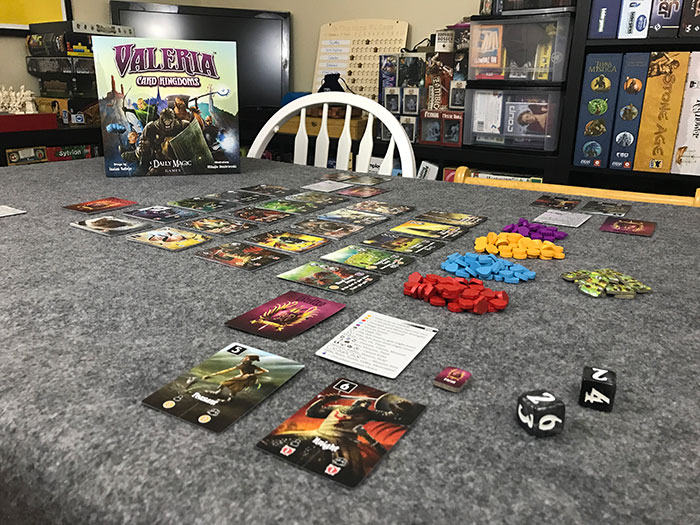 Card King(dom) of the Hill

You might be wondering, “What in the world does this game replace?!” Well, Valeria: Card Kingdoms literally replaced Machi Koro on my shelf. (If you’re not familiar with Machi Koro, here’s a quick overview of how the game works.) Don’t get me wrong, Machi Koro isn’t a bad game in its own sense, but I think that Card Kingdoms takes its core ideas and greatly improves on them. It’s pretty subjective, and I’ll get to why I think it is specifically better later on, but first let’s talk a little bit about what the game is and how it works! 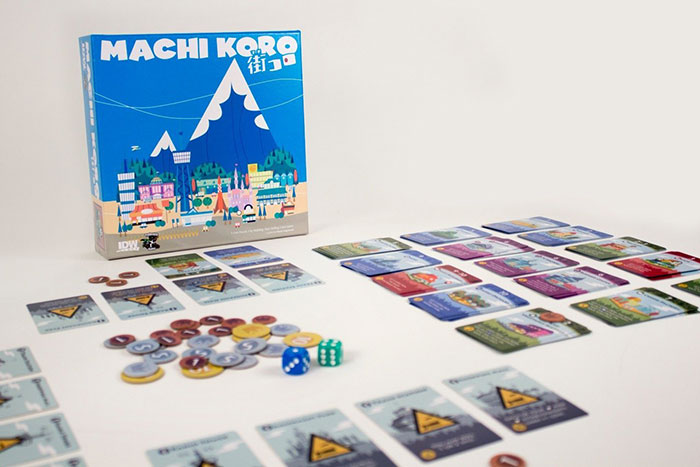 Valeria: Card Kingdoms is the first of three “Valeria” games that have been released over the past few years. Isaias Vallejo of Daily Magic Games has designed this series in a way in which they all fit together in the vibrant fantasy world of Valeria, illustrated by Mihajlo Dimitrievski, while offering very distinct gameplay elements. Without knowing this upfront, you could easily assume that Quests for Valeria and Villages of Valeria are expansions instead of separate, fully fledged games. Each one of these games are unique in their own right, but today we’re just focusing on Card Kingdoms.

How to play Valeria: Card Kingdoms

In Valeria: Card Kingdoms, each player is vying to win over the people of Valeria while keeping the kingdom safe from treacherous monsters to claim the recently open position of King. In game terms, each player is trying to gain the most victory points by the end of the game through acquiring victory point tokens from card abilities, defeating monsters, purchasing special cards, and working towards a specific duke goal that is unique (and secret) to each player. 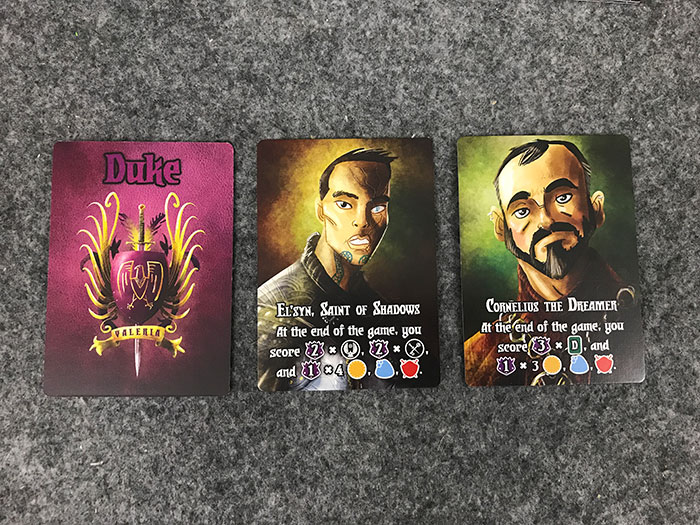 The core mechanics of the game are pretty simple. Each turn you roll the two dice, collect any resources given from cards that coincide with the numbers rolled, buy or defeat cards from the center tableau, and pass the dice to the next player for their turn. Sound simple enough? Let’s take a deeper look at each of these steps. 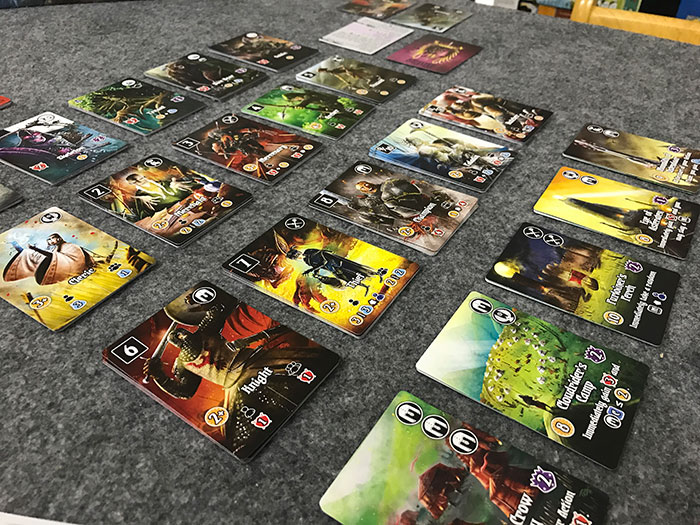 During the roll and harvest phase, the active player will roll two six sided dice and all players will see if the dice match up with the numbers on any of their cards. Each card has a number in the top left corner that can either match one of the dice or the added value of both dice. This means that it is possible to activate three different cards (or one card multiple times)! Each card that is activated gives the player some specific reward (strength, gold, magic, victory points, or a special ability).

If a player rolls a 2 and a 2, they check for cards that match those values in addition to their sum of 4. 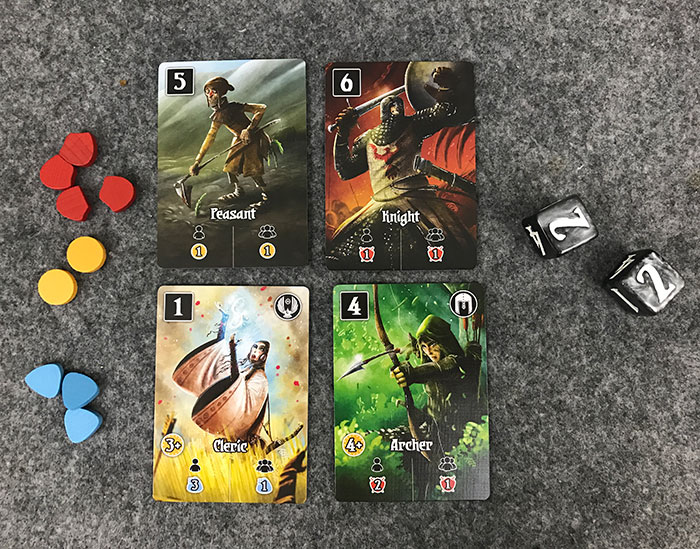 During the action phase, the active player takes two actions. They can take two different actions or the same one twice. Those actions include:

1) Slay a monster – The player spends strength tokens equal to the strength of the monster on the top of any of the stacks. They immediately gain the resources noted at the bottom of the card and set the card to the side of their tableau. 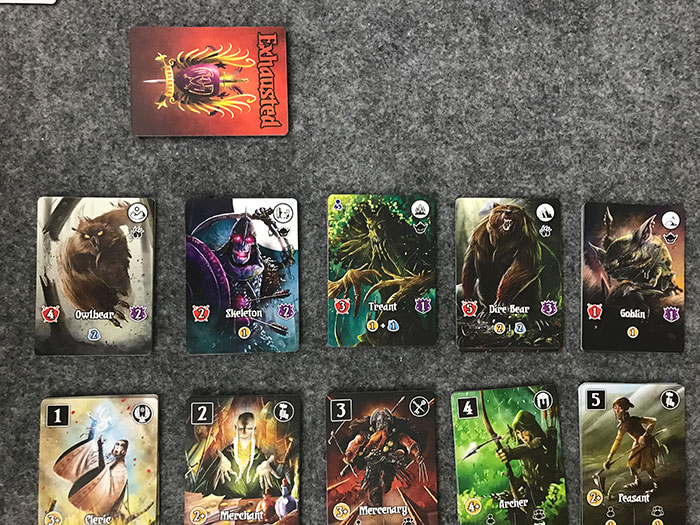 2) Recruit a citizen – The player may spend gold tokens equal to the number listed on the chosen card to add it to their tableau. If they have already purchased the chosen card, they must spend an extra coin for each copy they own. 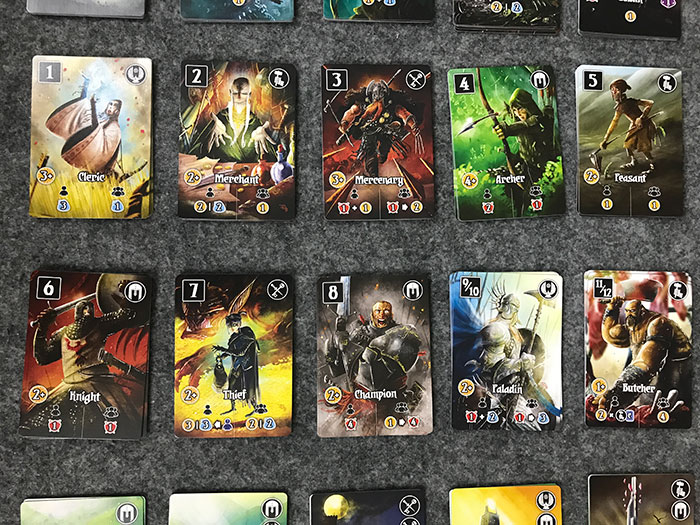 3) Gain a resource – The player may take one gold, strength, or magic token from the supply. 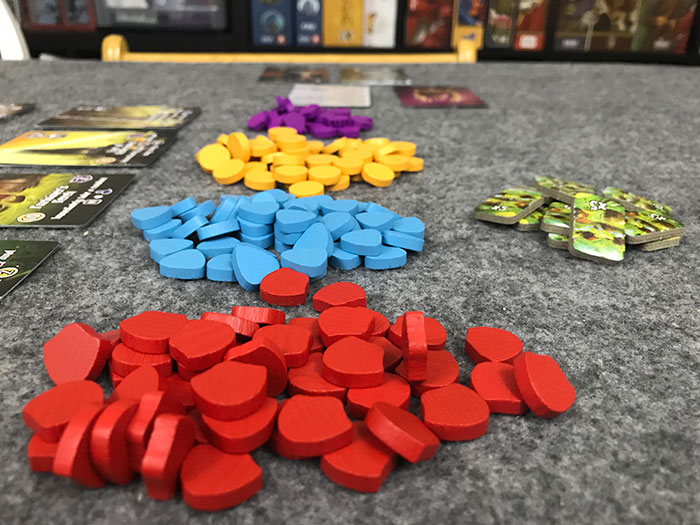 4) Build a domain – The play may spend coins equal to the cost on the domain to acquire the chosen card. Domains are placed in the player’s tableau and either give an immediate bonus or a bonus that will activate under specific conditions. 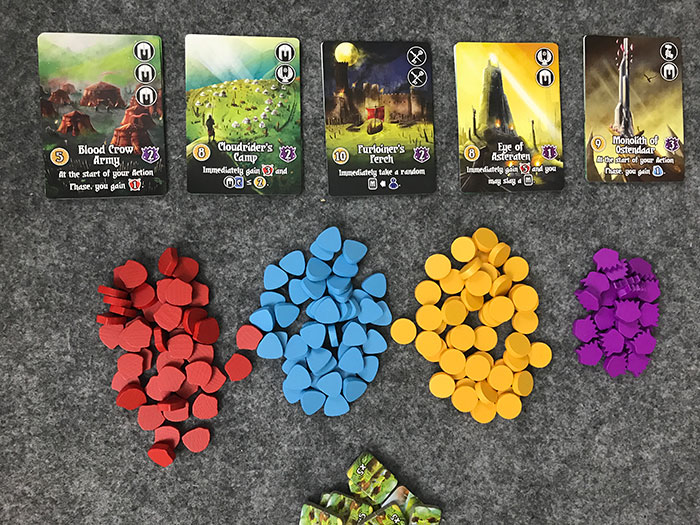 While slaying a monster, recruiting a citizen, or building a domain, the required cost of the card (strength or gold) may be supplemented with magic tokens as long as at least one of the required token is spent.

During the end phase, players will check to see if any end game conditions are met. If none have been met, the active player passes the dice to the player on their left so they can begin their turn.

The end game conditions are met if all monsters are slain, all domains are bought, or the number of exhausted stacks (citizen cards that have run out) is equal to twice the number of players. If any of these conditions are met, the current round is finished (players take turns until it comes back to the first player) and players calculate their final scores. Scores are calculated by adding all victory point tokens, victory points on monsters and domains, and adding any points from the player’s specific duke bonus.

I really enjoyed Card Kingdoms. As I mentioned before, it is very similar to another popular game, Machi Koro. In order to really see why I liked it so much more, let’s take a quick look at some of the differences and improvements.

Machi Koro operates under the same core ruleset as Card Kingdoms. There is a tableau of cards available for players to purchase and the active player rolls dice that trigger cards based on the numbers rolled. In essence, the two games feel very similar. Still, there are a few things that diverge very clearly.

Dice Rolls: In Machi Koro, players start by rolling a single die and must purchase a specific card in order to roll a second die. This changes the dynamic of the game significantly because the two dice are added together instead of being counted separately and added together. Each player has the option to roll one die or two each turn, but if a player mostly purchases cards with low numbers, they will be punished when other players roll two dice since lower numbers will be less likely to be rolled. This also means that later in the game, lower number cards can seem useless and wasted. 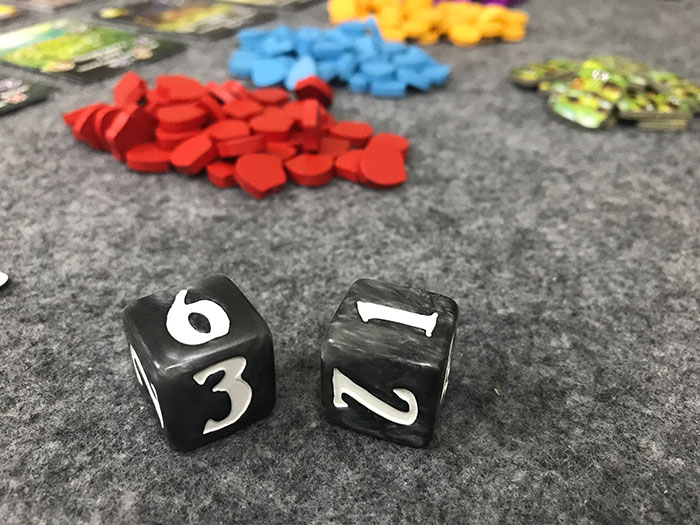 Non-Player Turns: Unlike Card Kingdoms, all cards in Machi Koro do not offer rewards to the non-active players. Instead, players must buy specific cards that only trigger on other players’ rolls. This means that more often than not, players will sit around without doing anything for a few turns. Card Kingdoms fixes this by offering a lesser reward for all cards when rolled on other turns, but also allows a player to take a resource when none of their cards trigger. This significantly cuts down on the feeling of randomness in the game. While there are still dice, players at least know that they will get something each turn. 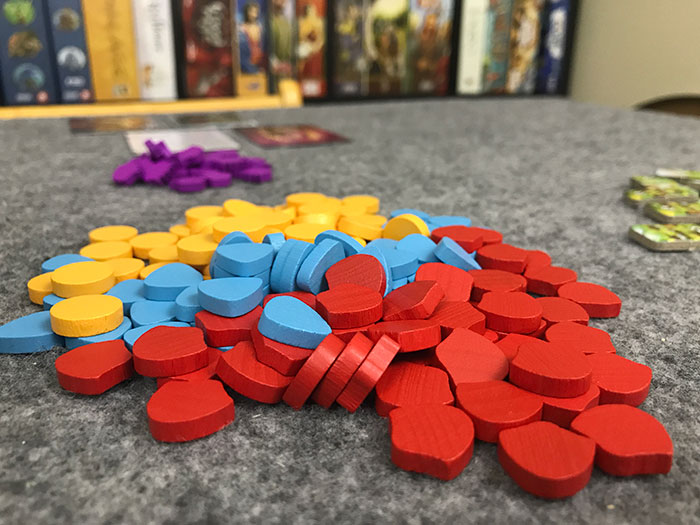 Monsters, Domains, and Extra Resources: Another main difference between the games is that Machi Koro only offers “regular” cards that you can buy. What I mean by that is in Card Kingdoms, there are many different kinds of cards that players can interact with. Not only are there citizens that can be purchased, but there are also domains which can be gained by having enough of different card types as well as monsters that can be destroyed for points. The game offers more choices by also adding additional resources. You might think that this would make things more complicated, but it really doesn’t add very much complexity while it does allow many more options. If you’ve ever played any of the Ascension games, the extra resources and monsters feel like a very familiar concept.

There are many things to love about Valeria: Card Kingdoms. The art is vibrant and interesting, the gameplay is simple yet strategic, and there is plenty of replayability available with the different card set ups. Really, this game was a win/win for me. It improved on a game that I enjoyed, but had grown tired of due to its shortcomings while also re-theming it into a fantasy theme that I’m more interested in. The end of game Duke cards help guide players while not completely forcing them down a single path, and the different approaches to scoring points allowed me to feel like I had the freedom to take a different approach every game.

If you already enjoy games like Machi Koro, I’d definitely recommend that you pick up Card Kingdoms. If you’re unsure about it, you should at least give it a shot! This is a great game for all kinds of groups, both casual and hardcore, and I think that it’s a great game to have on any shelf.

What do you think about Valeria: Card Kingdoms? Give us your opinions about what you like and/or dislike about the game in the comments below!