I quite enjoy co-op card games. From Hanabi to The Mind, there is just something really nice about working as a group to get numbers played in a certain order. That’s why I was more than happy to review a new card based co-op, Two Stacks. Unlike the two games mentioned above, in Two Stacks, no information is hidden from you or anyone else. This really brings out co-operative thinking, which I think is quite neat. And before you wonder, no — it’s not too easy.

In Two Stacks you are working as a 2 to 4 player team to play all the cards you have in front of you onto, you guessed it, two stacks. Two starting cards are laid out on the table, and in general players can play cards with a value one higher or lower than an existing card.

Players start with 4 face up cards in front of them as well as their role card, which tells them how they can play their cards. Along with numbers, cards have a colour: red or blue. In a two person game, your role will tell you whether you have to play alternating colours, or the same colours. When playing in a 3 or 4 person game, two additional roles are introduced. These roles take colour out of the equation, instead dictating the number you play. Players with an Upward role must always play higher cards, while players with the Downward role must always play lower cards.The players with these roles still can only play one above/below the card, the colour just no longer matters. 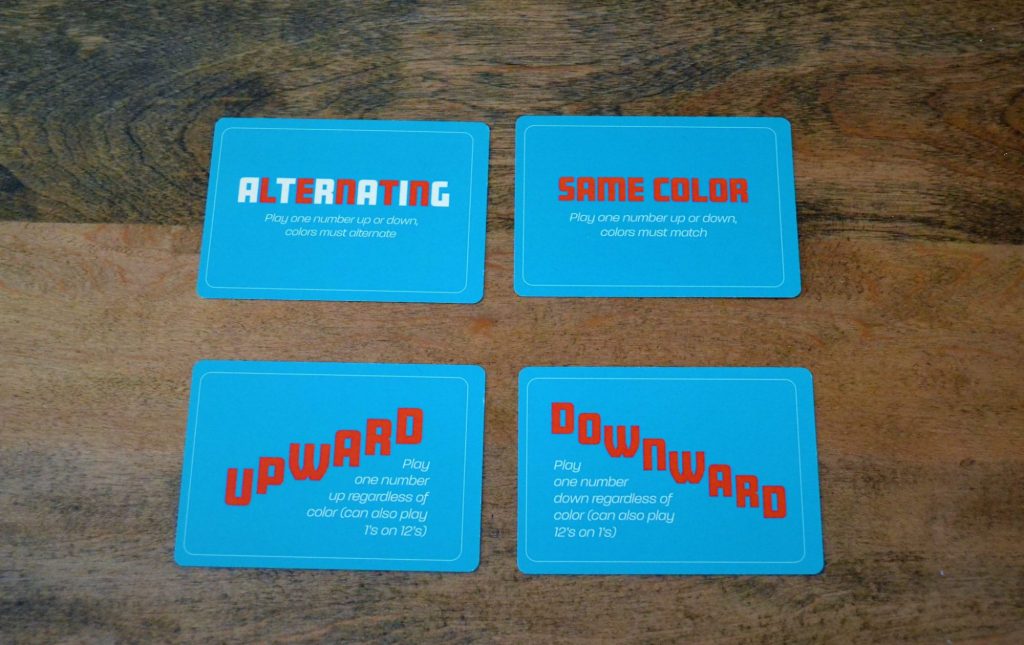 On your turn there are three possible phases: draw cards, play cards, and pass a card. To start your turn, you can draw as many cards as you want, up to a hand of 7. This phase is optional so long as you have a card you can play. Next, you can play as many cards as you like. While you may think you should always play every card you can, remember this isn’t Uno. To win, everyone at the table needs to run out of cards simultaneously, so there is often discussion about what cards should or shouldn’t be played. Finally, if (and only if) you played at least one card, you may pass a single card to someone else. This allows you to give a move to someone who doesn’t have one.

The cards are numbered 1-12, with the numbers looping at the end. By this I mean that you can play a 1 on a 12 and vice-versa. Along with number cards there are also Bridges. A Bridge can always be played, making it a good option if you have nothing else to play. The next card played on a Bridge must be 2 above or 2 below the original card that Bridge was played on, with role card rules applying. In fact, there is never a case in the game where the role card rules don’t apply. Because Bridges can be played on any card, they make the game easier. For this reason, the difficulty level you are playing is determined by the number of Bridges you include in your deck. Difficulty levels range from Simple to Impossible. The difficulty of the game is also changed by player count, with a 2-player game being easier to win than a 4-player game.

Some numbered cards will have an effect when they are played. There are two of these cards, “Switch” and “Special”. As soon as a Switch card is played, players pass their role cards around the table counterclockwise. Depending on what is happening in the game this can either be very helpful or very unfortunate. Since it is a co-op game, generally you’ll only make moves that help you to get rid of cards, but you don’t always have a choice.

Special cards change the numbers that can be played. If an even-numbered Special card is played, any odd card can then played as the next card, it no longer has to be 1 above or below. If an odd-numbered Special card is played, any even card can be played on top of it. Since Special cards are the most confusing part of the game, I’ve included an example below. And as I said earlier, the role cards still apply. They always apply. This is probably the easiest place to forget about your role card, since you get excited by all of the possibilities. 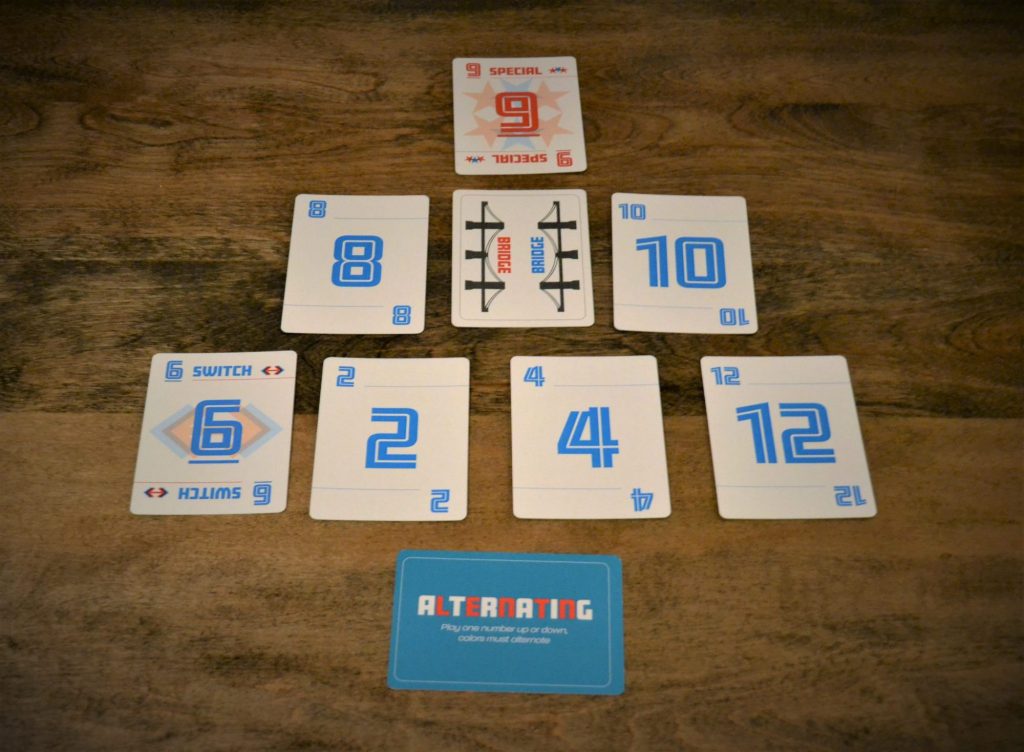 Imagine the 9 at the top of the picture has been played on one of the stacks, and you have the Alternating role. On a normal 9, you could play the cards directly below it, but on a Special 9 you can play any of the cards below it. Fun fact, while setting up this photo I learned that there are no 6’s in the deck that aren’t a Switch card.

The game will end when you win, meaning no player has cards in front of them anymore, or when you lose because all players have consecutively not been able to make a move. There is no score to see how well you did, simply the difficulty level that you chose and whether or not you succeeded.

I quite like Two Stacks. It is a fun challenge and when you figure out how to play your cards just right to clear everyone’s hand it feels like a big accomplishment. The difficulty of the game definitely scales up with more players. With two it is easier to make and execute a plan. Once the other roles and more players are introduced, that plan takes a little more thinking to create. While I liked it at all player counts, I prefer it at two since the game demands a lot of conversation about what moves should happen next, and with two players it is more likely that each player has an equal voice than with four.

One concern I have for Two Stacks is that it might be difficult to play with new players. This isn’t because it is hard to understand, but because more experienced players may take over and lead the game without letting less experienced players make decisions. Of course this is a risk with many co-ops: once you start to understand the strategy of the game, an Alpha Gamer might emerge.

I like that this game has varying difficulty levels. In order to get a full grasp of the game I played it at all player counts, and all difficulties up to “Expert”. The changes in difficulty are quite clear. This is nice because as you get more skilled at the game you can make it harder to ensure that you are always facing a challenge. For anyone who has mastered the game, there are even two variants in the rulebook to increase the difficulty level: secret mode where cards are in a closed hand and not discussed, and Ultra Win, where you can only win if all cards in the deck are played. I didn’t try either of these modes so I can’t comment on their enjoyability, but I do like that they exist as an option.

When I first received the game I was surprised by the box that it came in: a folding box much like what you would find a deck of standard playing cards in. This has its pros and cons. While I’m not worried about the box accidentally falling open and spilling my cards, it is a little difficult to put away. As you can see in the picture below I actually ripped the box while putting the cards back in. Even though this might not be as nice as the boxes modern card games like The Mind come in, it’s important to note that this is an independently published game and it’s good to support the little guys: especially when they come up with such a good idea!

Two Stacks is a game of skill mixed with a little chance. It’s exciting when you manage to clear your cards and it’s fun to figure out a new plan when everything goes wrong. I’ve had moments in this game where the whole table cheers because we drew the one card we needed. It really is that exciting, and because it can be quite challenging it feels like you earn your victories. I’m happy to announce that Two Stacks has found a home on my shelf.

A: Yes I have, but not as much as I thought I would. It’s a quick and small co-op making it relatively easy to get to the table; however, I often choose Hanabi or The Mind over Two Stacks. Another thing to add is that my husband and I have beat it on every level, so I kind of feel like we’ve won.