“Tuki” comes from the languages of the Inuit of the northern Polar region (Inuktitut) and is derived from “Tukilik” (plural Tukiliit), a word used to denote objects that have a certain meaning.

The best-known of these objects are without doubt the inukshuk: [human-made] stone towers resembling human beings in both form and function. 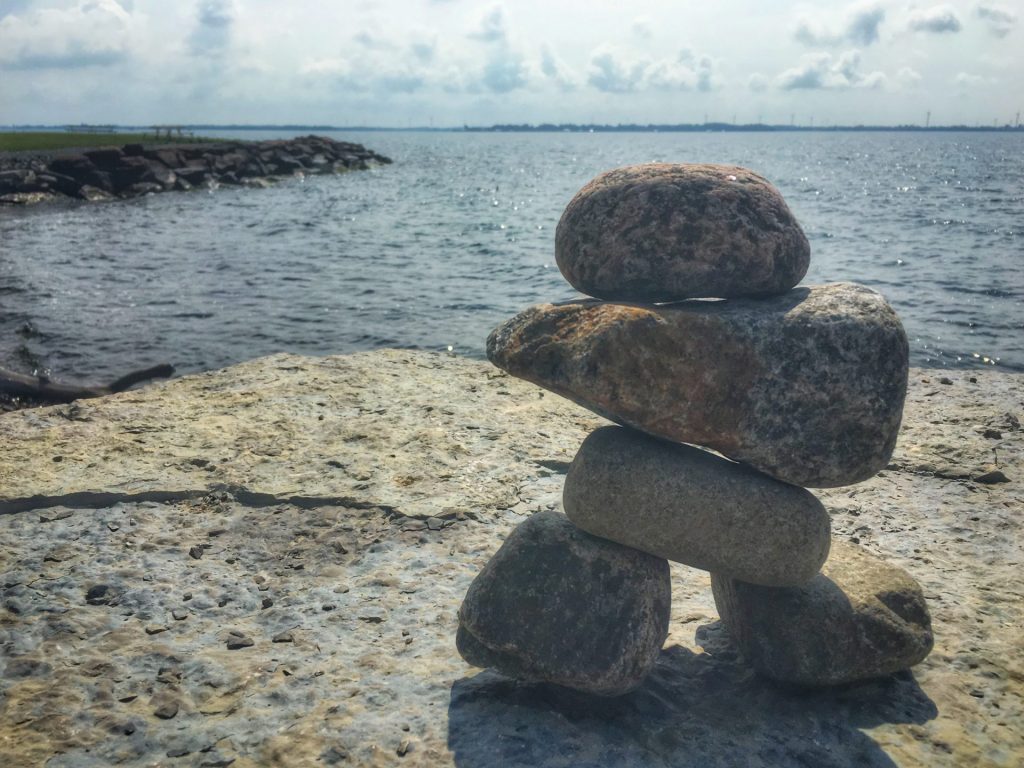 While not always necessarily serving a purpose, it is common to see inuksuit (plural of inukshuk) built along the shores of rocky areas.

The Inuit use these stone towers as guides in the snow-filled expanses of Canada and Greenland to show the way to caribou hunting grounds, areas abundant with fish, or the next village.

Tuki is a real-time dexterity puzzle game for 2 to 4 players in which players are racing to build their own Tukilik out of stones and blocks of snow. While you don’t always have to be the fastest builder, you want to make sure you’re not the slowest. 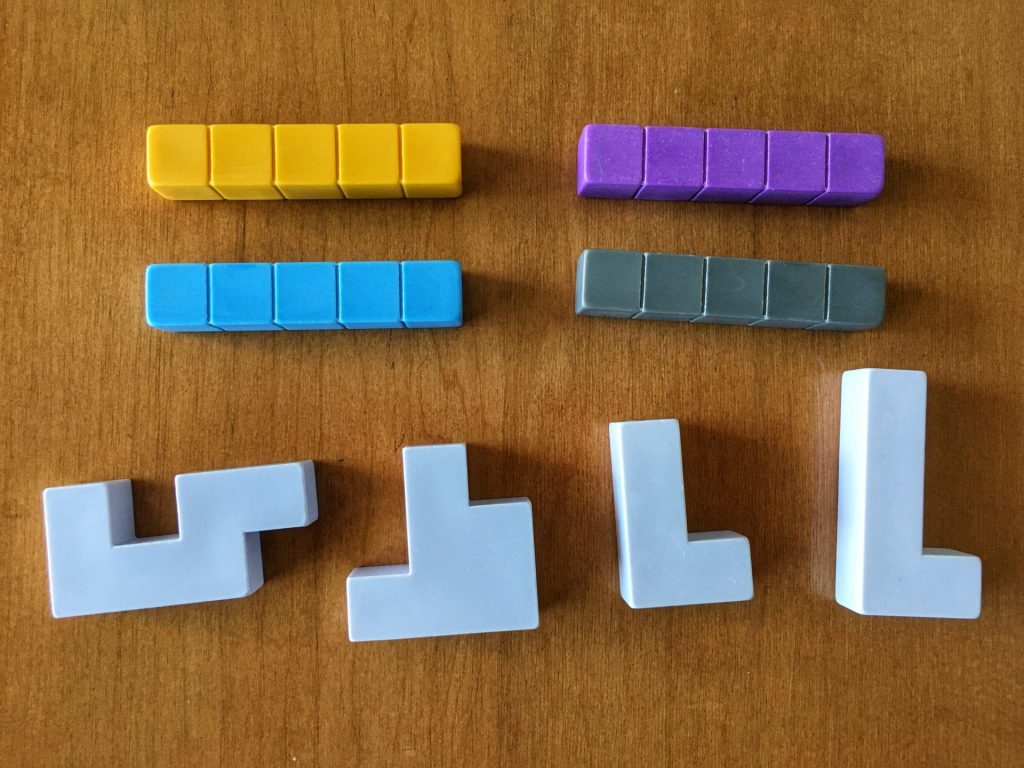 Each player has the same set of coloured stones and blocks of snow to build their Tukilik. The orange stones are only used in the advanced game.

In each round, a Tukilik Card is revealed; players must then build the depicted Tukilik, as fast as possible, using their set of stones and snow. The slowest player (or sometimes the player who made an error) gets the Tukilik Card for that round. Once someone has collected their fifth Tukilik Card, the end of the game is triggered. 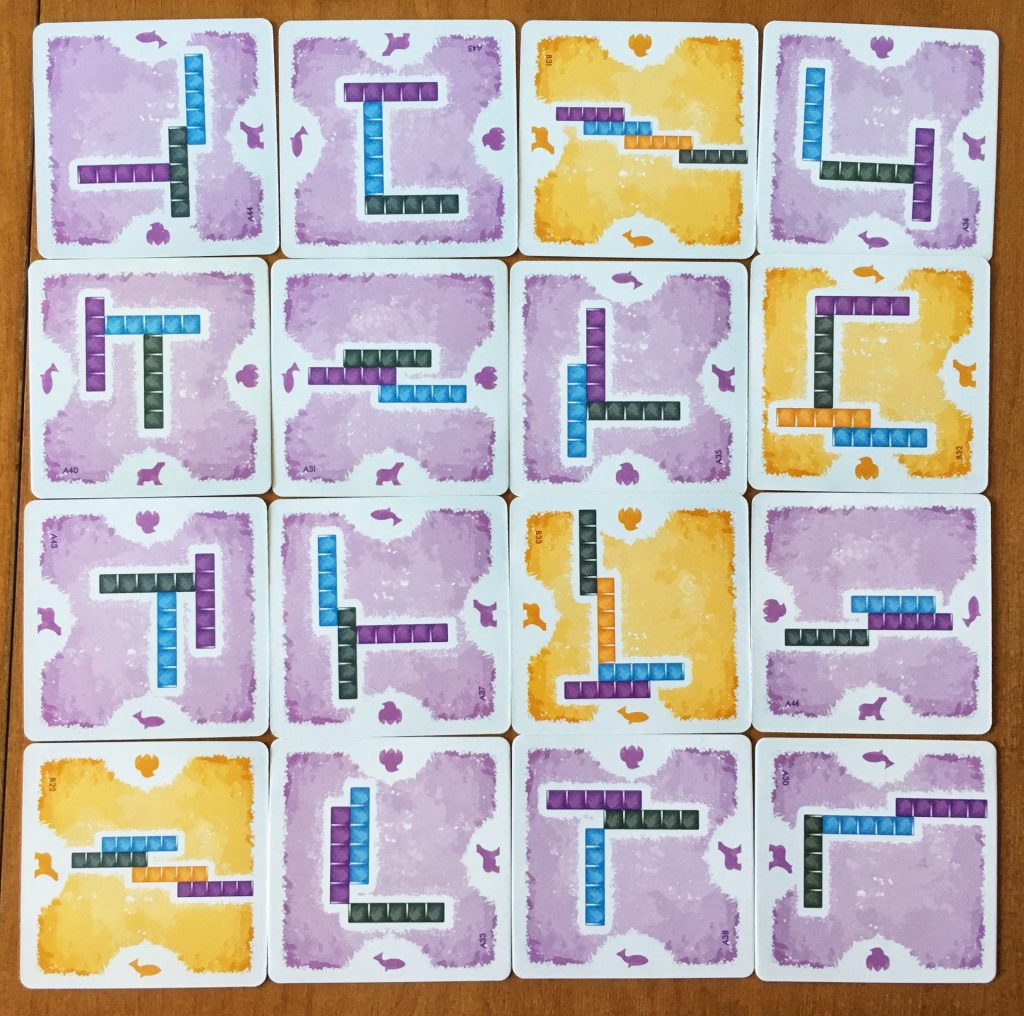 The Tukilik Cards show exactly how the coloured stones must be placed to complete it.

If Three’s A Crowd… Playing Tuki with Four Players

Before I get into how Tuki is played, I think it’s important to note that while the game technically supports 4 players, this doesn’t mean that all 4 players will be building at once. 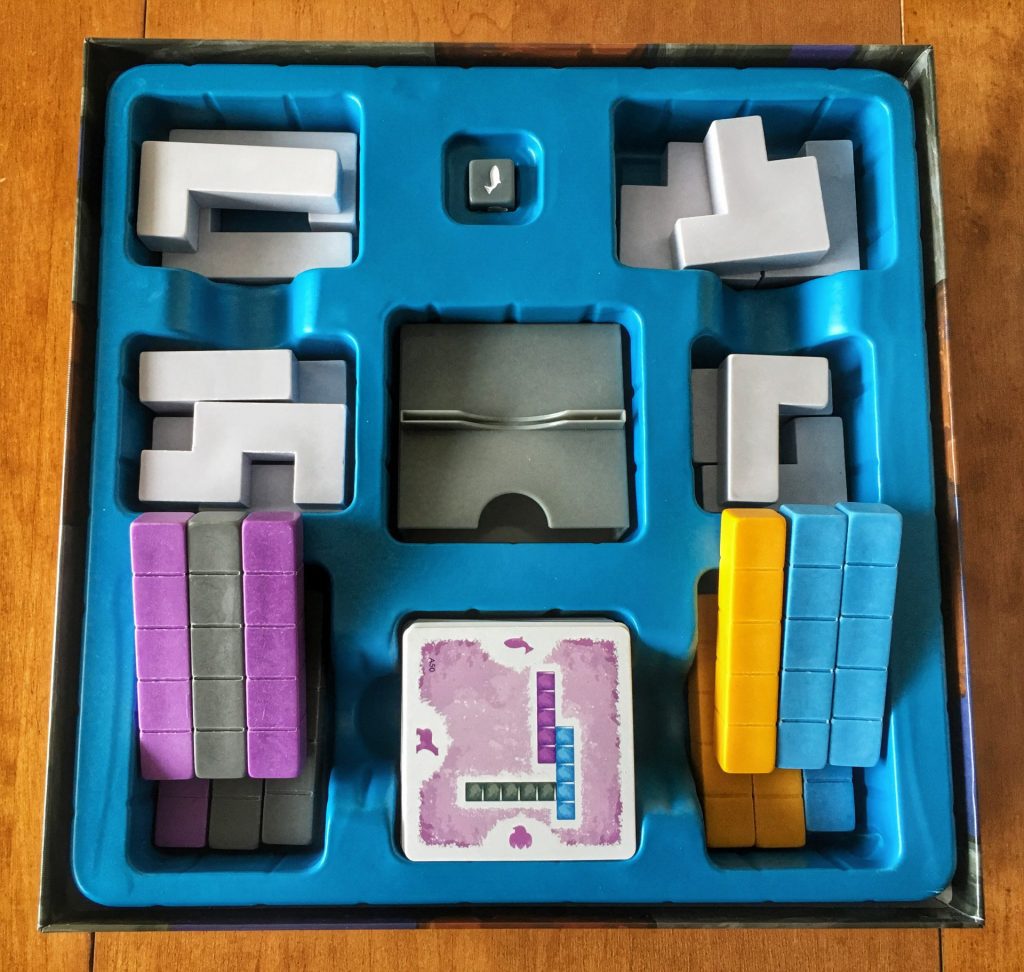 A quick look into the box shows that there are only enough building materials for 3 players.

The rulebook details how to play Tuki with 4 players and I’ll touch on exactly how the gameplay changes at this player count throughout this review, but just note that the experience is a little different when playing with 4 instead of 2 or 3.

A round in Tuki follows these 4 steps:

The scout for each round is the player who received the Tukilik Card in the previous round, except in the first round when the scout is determined by the start player rule — the last player to go skiing.

In a 4-player game, the scout doesn’t participate in building for that round. Instead they give their set of stones and snow to the previous scout, allowing them to participate in the upcoming round.

First the scout rolls the die, which features one of the three animal symbols with and without a block of snow. This die determines the orientation for that round’s Tukilik Card and whether players must build their Tukilik directly on the playing surface or on their blocks of snow. The scout then inserts the card into the stand so that the rolled animal symbol appears on the bottom. 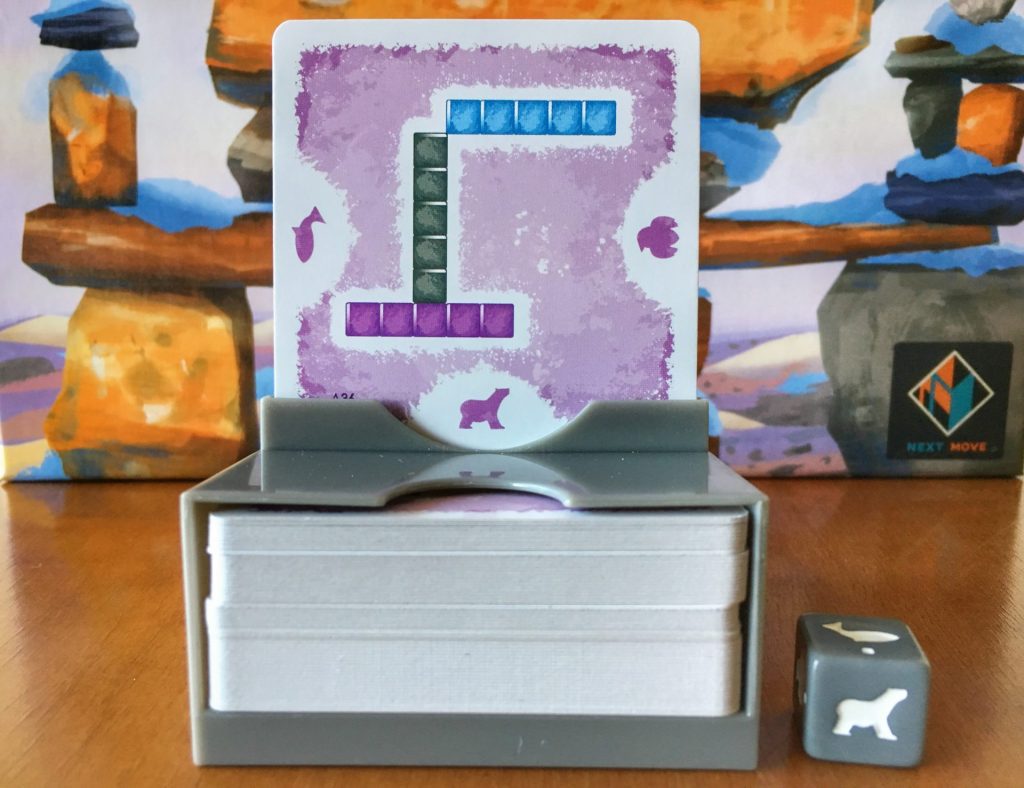 The Tukilik Cards show exactly how the coloured stones must be placed to complete it.

In this step of the round, the real-time excitement begins: participating players use the coloured stones and blocks of snow to build the Tukilik represented on the card. It isn’t necessarily a race to be the first, rather it’s a race to not finish last. Players also want to make sure they are building the pictured Tukilik precisely because even if they are the speediest, they are still penalized for errors.

Do You Want To Build A Snowman? Using The Snow Blocks

You may have already noticed that the snow blocks aren’t shown on a Tukilik Card. This is because the snow blocks have a different purpose: they are used as stabilizers to support, counterbalance, or serve as a foundation for your Tukilik. 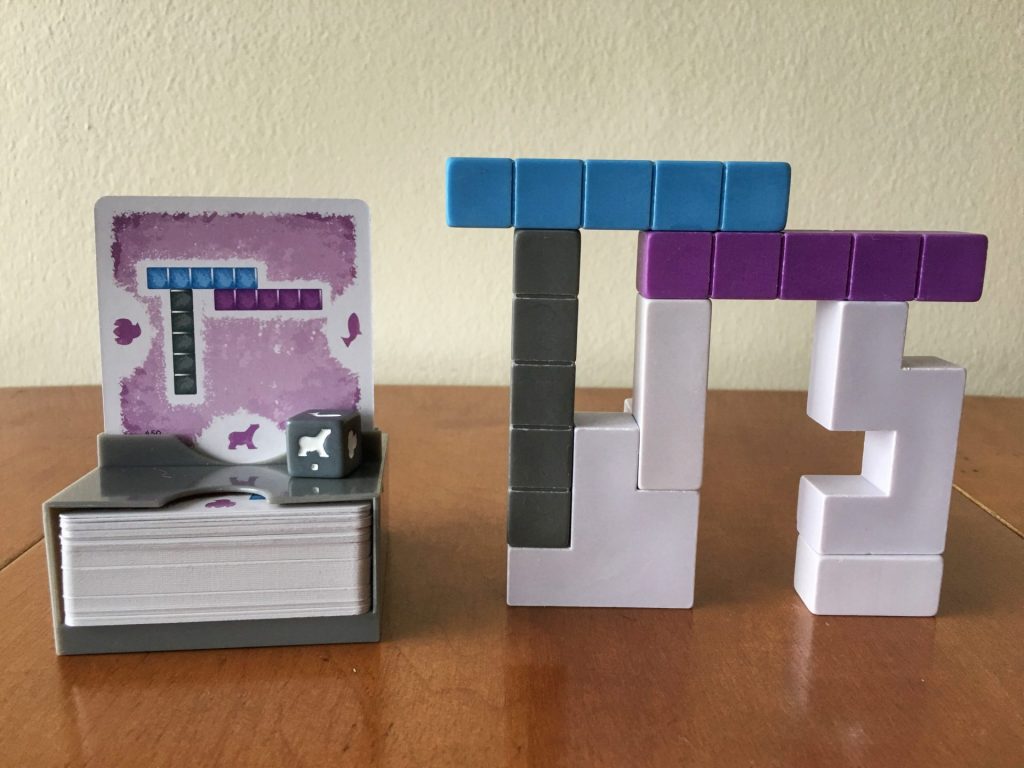 This Tukilik must be built on a foundation of snow and not directly on the playing surface (note the white block on the die represents this rule).

A player may use as many snow blocks as they like and they may rotate their snow any which way. When it comes to evaluating for errors in the next step of the round, it’s as if the snow didn’t exist (unless of course the Tukilik must be built on snow blocks instead of the table). 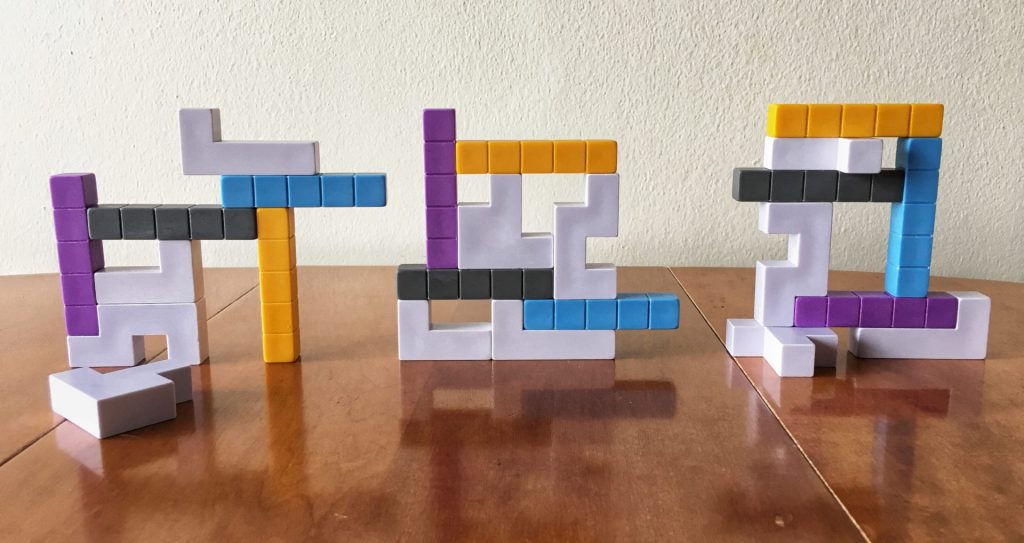 Tuki encourages players to get creative with how they use their snow blocks.

Once a player thinks they’ve correctly built their Tukilik, they let everyone know. When everyone has done so, the round ends and the Tukilik evaluation begins.

If everyone built correctly, according to the Tukilik Card, whoever finished building last takes that round’s Card. It might feel a bit backwards, but these Cards are bad news; you don’t want them. Gaining a Tukilik Card will be a constant reminder of your failure in a given round and it will also mean you are one step closer to losing the game.

If a player made a mistake, they get the Card. If more than one player did, then whoever announced earliest that they were finished gains the card.

A new round begins if nobody has received their fifth Tukilik Card.

When a player gets their fifth Tukilik Card, the end of the game is triggered… but how Tuki ends depends on the number of players. In a 2-player game, the game ends immediately and the player with the fewest Cards wins. In a 3- and 4-player game, one last round is played — a final showdown if you will. The player who triggered the end of the game (i.e. gained 5 cards) becomes the scout and they do not participate in the final, deciding round. This last round goes through the same steps as the others, except that the first player to build their Tukilik correctly wins, no matter how many Cards they collected throughout the game.

If you’ve read any of my other reviews for real-time games (Dimension and Jetpack Joyride) then you already know I’m a fan of this game style. I love solving puzzles under a tight and stressful time constraint, especially when it involves competing against other players to be the first or, in the case of Tuki, not the last. There is just something about calling my brain into action to work quickly that I find so satisfying, even if it, admittedly, often brings out my natural competitiveness.

We had a rousing play through of Tuki a couple of weeks ago when Matthew from @asmodee_canada popped down for a visit. I generally do not enjoy speed games, but this one was a lot of fun! 😜 @Asmodee_Canada @redmeeplesmash @TheGaming_Maven @Mattyleg1 #nextmovegames pic.twitter.com/cQEgnLsn48

As might be expected, Tuki is no exception; this game is great! However before I sing my praises of the game, let me get some of my complaints out of the way.

Firstly, the rulebook lacks answers to many important questions like:

My other complaint is with the listed “4 player” count. As much as I enjoy the game, it’s unfair to say Tuki supports 4 when one of those players is sitting out and observing each round. Personally I don’t mind this because it means a player gets a little break from the stress and has a chance to reset before competing again. I also like how the same person won’t sit out for consecutive rounds and how they can judge who finished last, watching for potential cheaters. Even still, I would be disappointed if I went into a game of Tuki expecting a 4-player building showdown only to find pieces for 3 players when I opened the box. Tuki works fine with 4, but it is really a game that shines with 2 or 3 players.

Now for the good stuff: Tuki is everything I want from a real-time puzzle game. It’s easy to teach, quick to play, has an attractive table presence, is tactilely pleasing, and is entertaining. As someone who likes to build inuksuit when I get my hands on a pile of rocks, I also like the theme of the game. 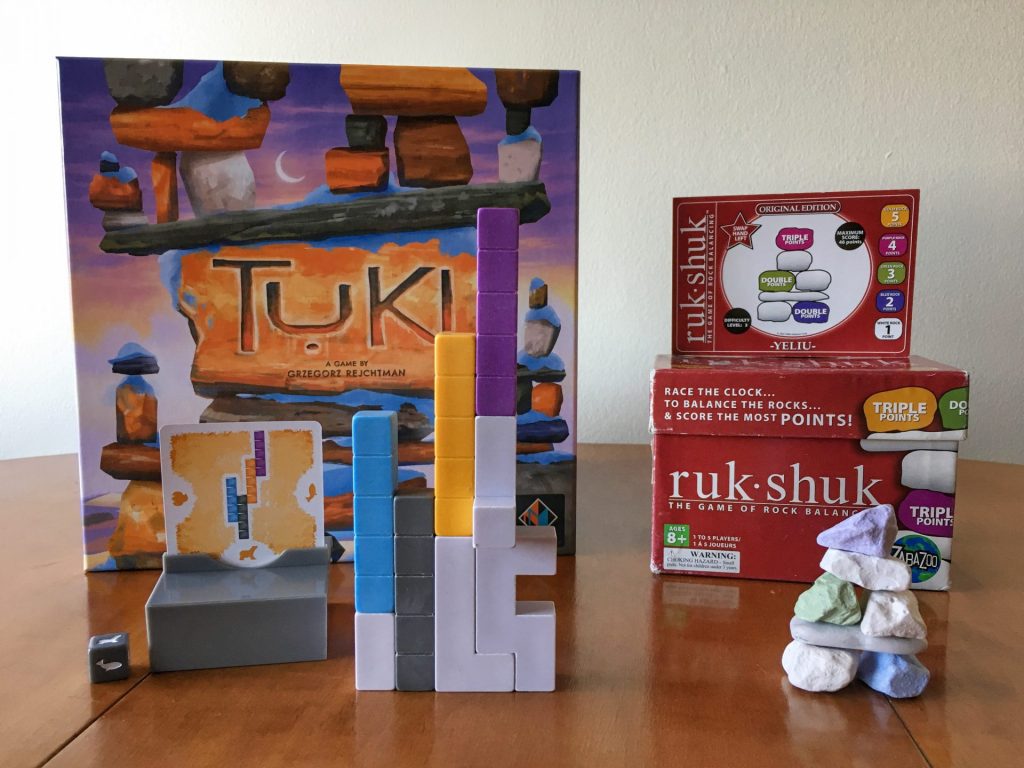 While Tuki isn’t the first inukshuk-building game, it is the best.

A nice touch I appreciate in Tuki is that each card has a solution available to players. The Tukilik Cards are numbered and all solutions are available to download on publisher Next Move Games’ website. 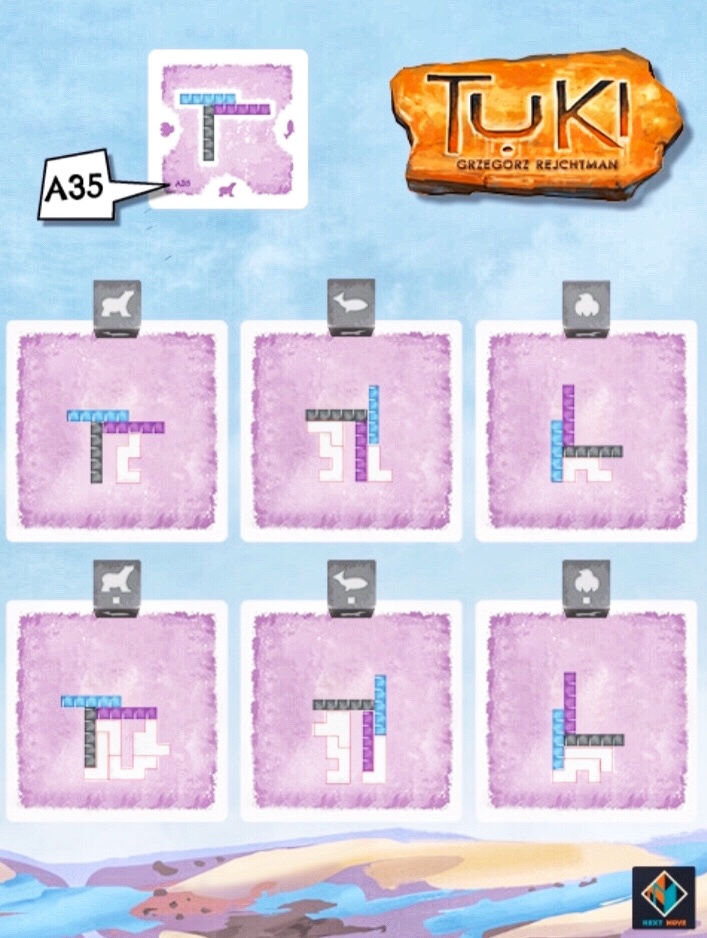 These are the 6 possible solutions for card 35. With 100 cards in the game, you can build 600 different Tukiliit.

Finally, I think my favourite part of Tuki is how the winner of the game is decided in the final round with 3 and 4 players. Since there is a showdown between the “best” players, it suggests that you don’t have to always be the fastest or most successful every round to win the game. It means you aren’t harshly punished for making a silly mistake or for struggling through a difficult Tukilik Card. It evens out the playing field for the players more so than some other speed games, which is really nice. While it’s fun to win, it doesn’t always feel satisfying to obliterate your friends in a game and thankfully Tuki solves this.

It was no surprise to me that I loved Tuki, but I think that even if you don’t enjoy speed games, you might be surprised to find you like this one.

Inuusiq by The Jerry Cans

More on The Jerry Cans: https://www.thejerrycans.com/bio.

Shelter as we go… by Quantum Tangle

Songs to check out include: Tiny Hands, Ikersuaq, Love Is Love Pt.1, and Angnahiak.

Songs to check out include Fight, Rabbit, Flight, and Tulugak.