Trellis is a tile-laying game in which players are creating a growing tangle of vines, trying to be the first to place all of their flower tokens on these vines. The player that does so wins the game. 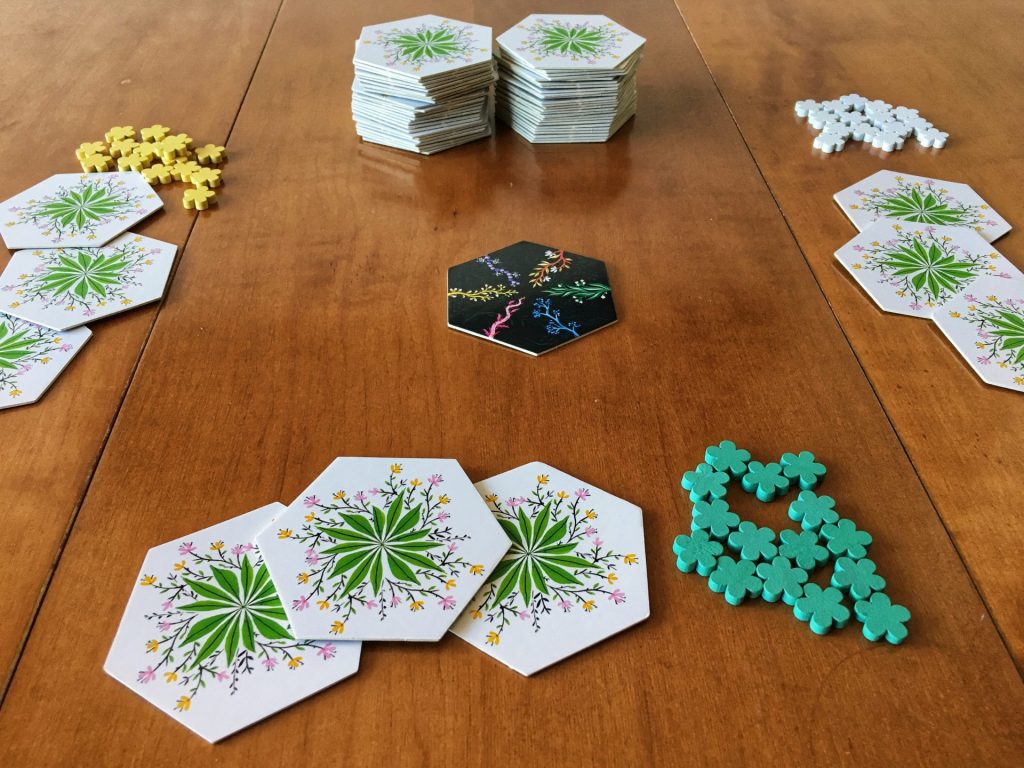 Each player starts with a hand of 3 hex tiles and 15 flowers in their player colour.

Each player goes through the following steps, in order, on their turn:

A player begins their turn by adding a tile from their hand to the playing area. Initially this consists of only the Starting Tile, but it will grow over the course of the game. The only rule for planting a tile is that it must connect to an existing vine. The colour of the vine, however, does not need to match, although there are advantages to matching an existing vine’s colour (more on that shortly). 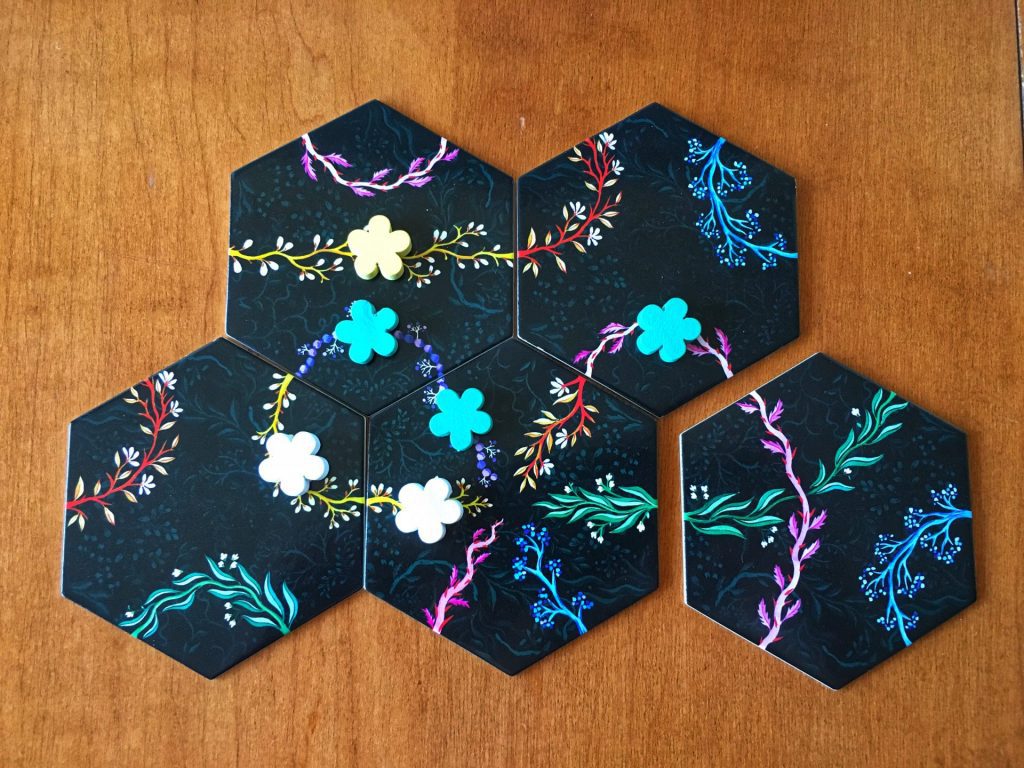 While the vine colours will match when this tile is placed, it is not required (as seen on the already planted tiles).

After the new tile is planted, the player claims an empty vine on this tile by placing one of their flowers. 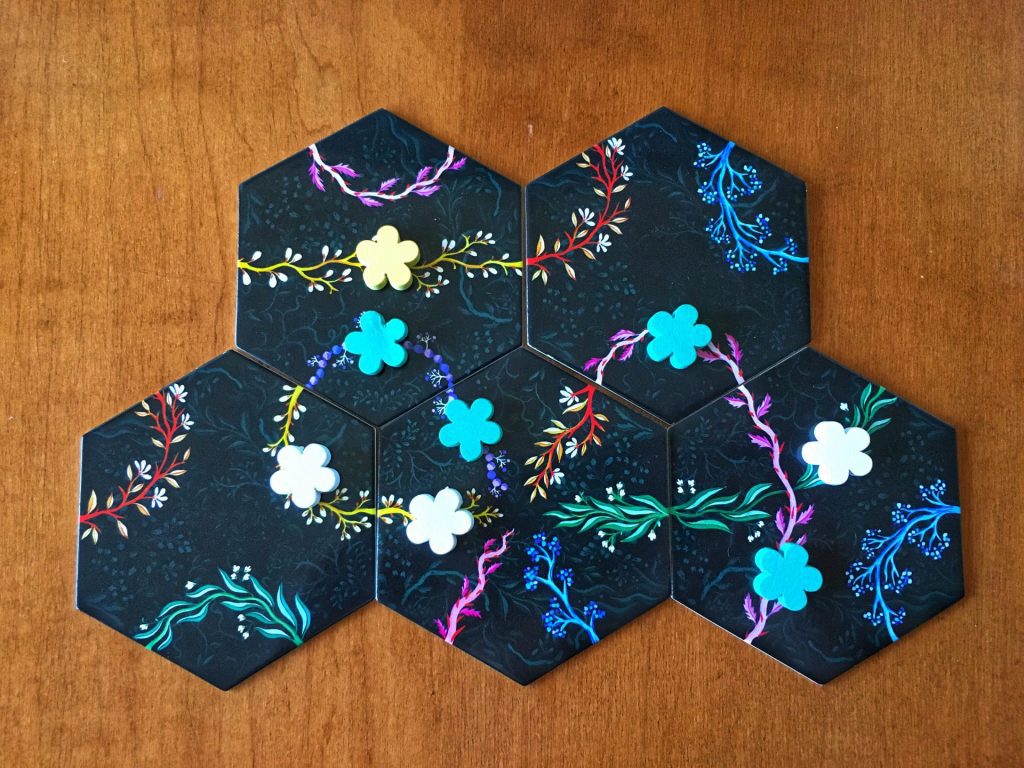 On the bottom right tile, the white player could have chosen to claim the green or blue vine on this tile since they were both empty (i.e. not already claimed by another player).

To understand how this next step of a player’s turn works, I must first explain that flowers may bloom on vines. You see, after each step in a player’s turn, they must check for blooms before proceeding to the next. Since this is a tile-laying game, the board is constantly changing, which might give players a chance to bloom their flowers immediately on newly connected vine tiles. 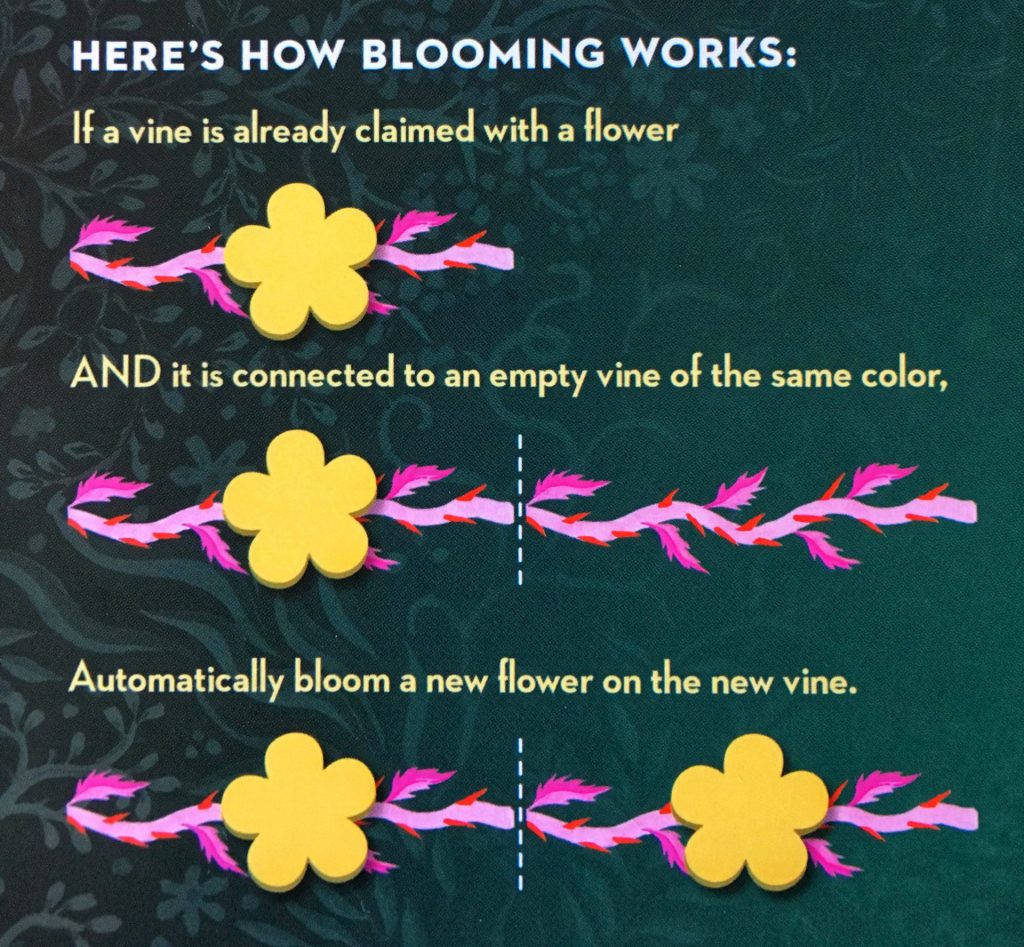 The rulebook does such a wonderful job explaining how blooming works.

Blooming is repeated until all claimed and connected vines are resolved. This means that any player’s flowers can bloom on any turn. Now, if you think back to the first step, “Plant a Tile”, you might remember I mentioned there are advantages to matching the colour of a vine. This is because a newly planted tile may cause newly connected vines to bloom. Ideally you want your already claimed vines to bloom, but it isn’t disadvantageous to help your opponents (and you’ll learn why soon). 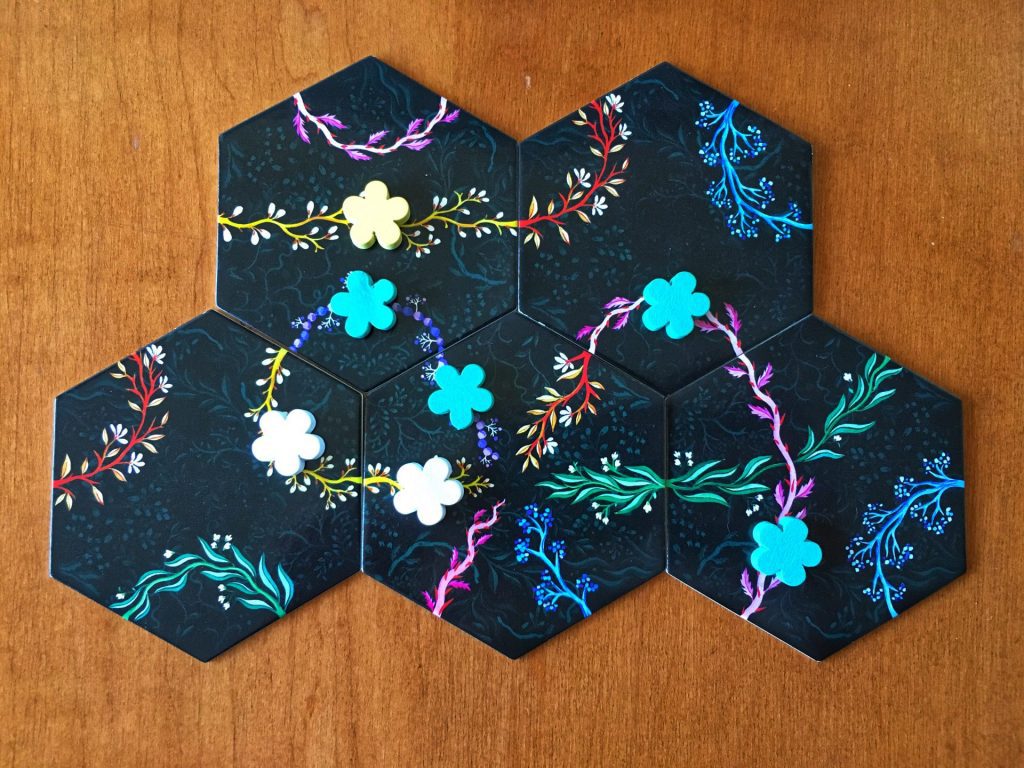 When the bottom right tile is placed during the “Plant A Tile” step, the green player (who already claimed the pink vine on a previous turn) blooms a flower on the newly placed tile since the vine colour matches.

Blooms may also occur during the “Claim A Vine” step if the empty vine you claim connects to any empty, unclaimed vines of the same colour. 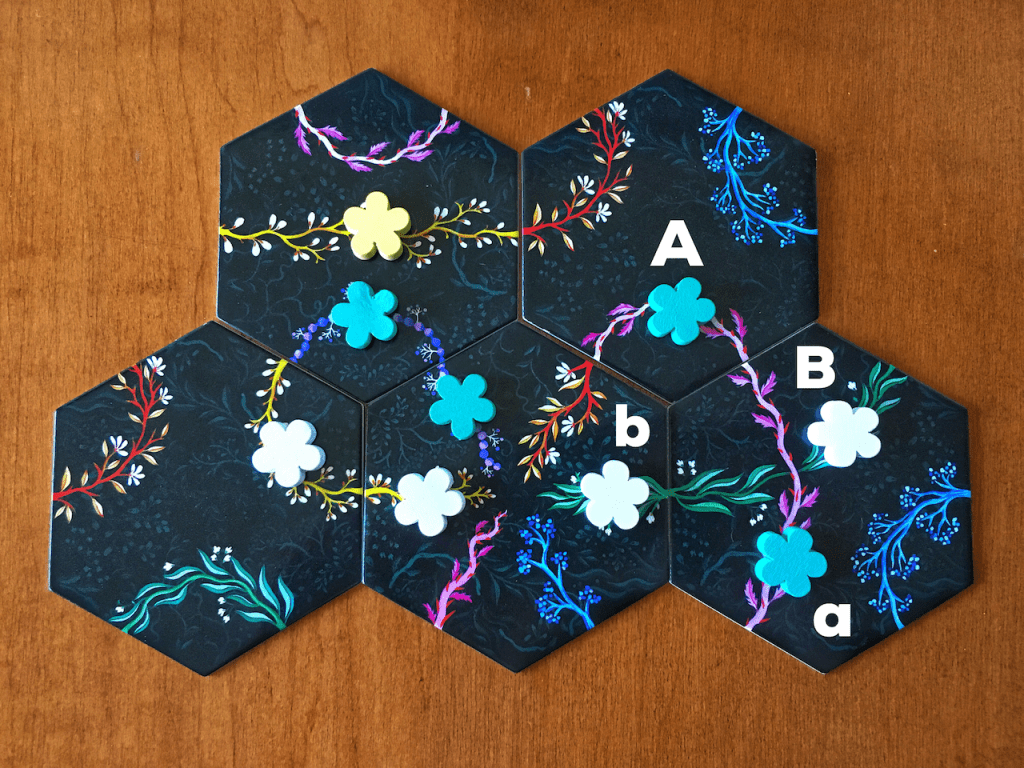 During the “Claim A Vine” step, the white player claims the green vine (B). Since this is already connected to an empty, matching vine they get to bloom (b). Flowers A. and a. bloomed for the green player in the previous step.

While any player’s flowers can bloom on anyone’s turn, the active player generally benefits the most because they receive a gift for every flower that an opponent bloomed. This finally brings us to step 3, Claim Gifts. The gifts the active player receives are in the form of bonus flowers: one per flower that other players bloomed on your turn. The bonus flowers are used to claim more vines on the just-placed tile or, if there are no more empty vines on it, the bonus flowers can be used to claim any empty vine on the board. 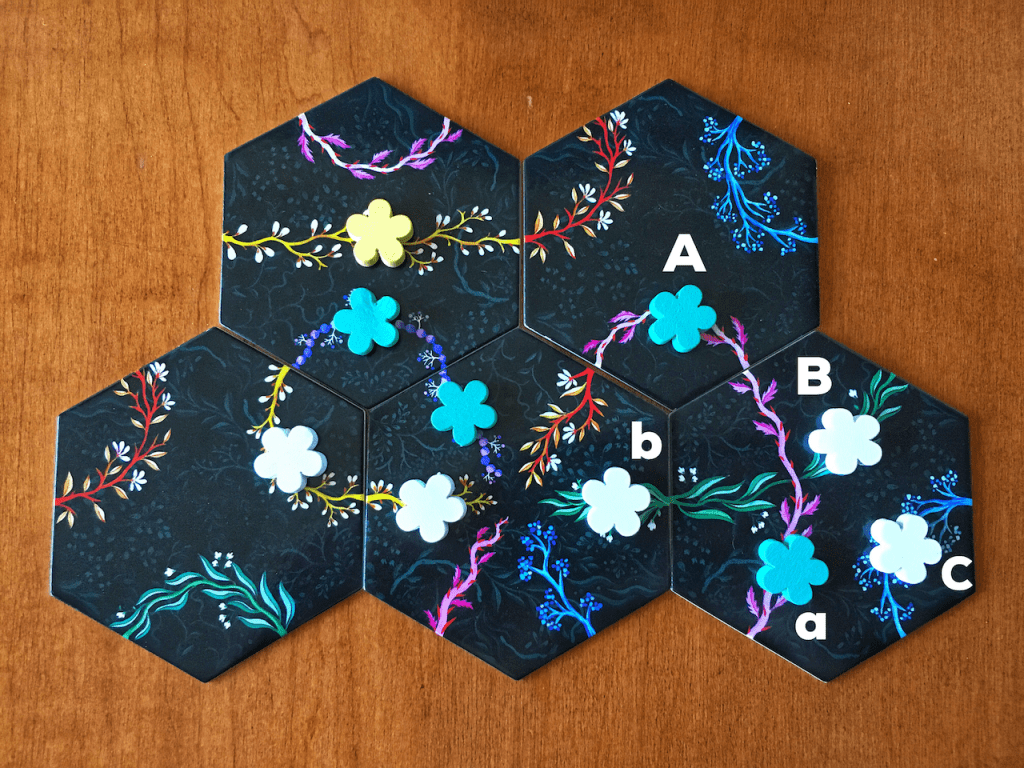 The white player gets one gift because the green player bloomed on their turn (a). With this gift they claim another vine on the tile they just placed (C).

As with the two previous steps, a player checks to see if their newly claimed vine blooms, allowing the player to place out even more flower tokens. Remember the winner of Trellis is the first player to get out all of their flower tokens so you will want to take advantage of as many bloom opportunities as possible.

Finally a player completes their turn by drawing a tile from the deck so that they always have 3 hex tiles in hand. Rest assured, Trellis comes with enough tiles that I have never seen the draw deck run out before a player has won the game.

The box art, the components, and even the rulebook make Trellis a stunning game. The game just looks very warm and inviting. Everything is also functional; the flower tokens, for example, are soft pastel colours which contrast nicely with the darker hex tiles. The tiles too are entirely decorated with vine designs, but the important vines are easily distinguishable. While the artwork might entice you to sit down at the table and play Trellis, is there a good game behind it? I’m happy to say that there is.

Trellis is a lovely, family weight abstract strategy game that uses tile-laying to encourage player interaction. The tile-laying not only expands the board, but the players’ options also grow. Your early turns might start with you getting one or two flower tokens out, but by the end of the game, you may get four (or even five if you’re really smart).

It is, however, the tile-laying combined with the blooming that make Trellis special. There is a fine balance between helping others to help yourself and just handing your opponent the victory. This is especially tricky to manage since an opponent can bloom and place their last flower (and thus win the game) before you’ve even taken your full turn. You also don’t want to be the player who never helps other players because, based on my games of Trellis, that player never wins. 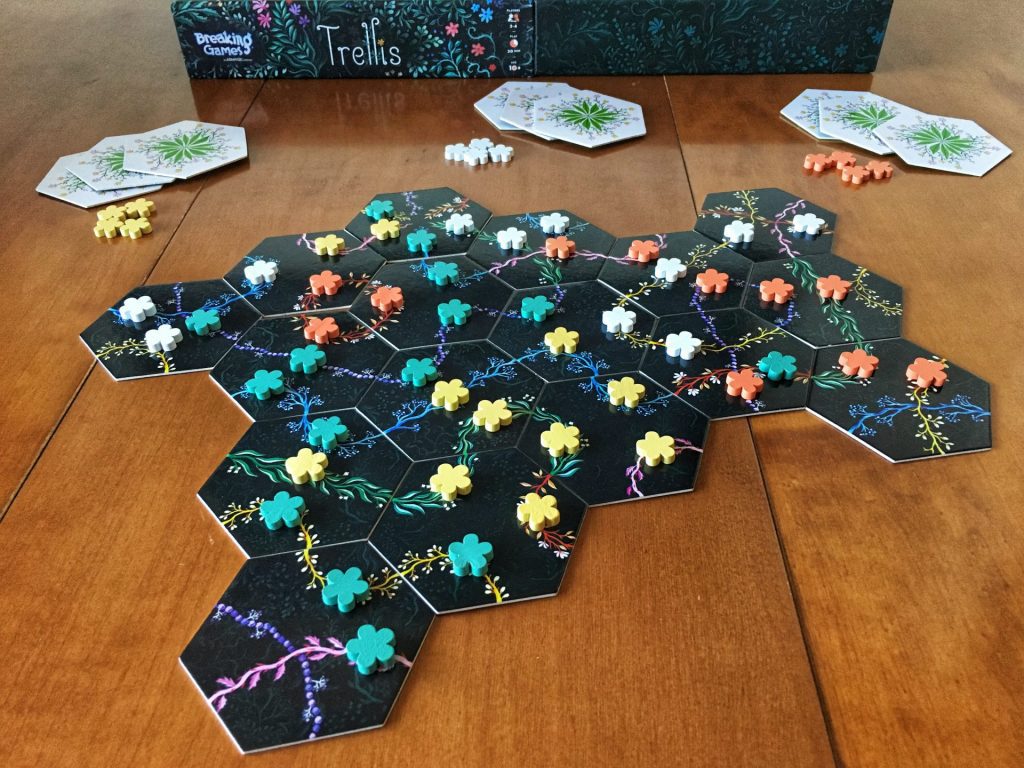 This is how a game of Trellis might look in the end.

Trellis is a quick game with a play time of only 20 minutes. The game is so simple to learn that teaching it should take just a few minutes and it plays quick enough that it doesn’t overstay its welcome. Not to mention, you’ll probably come out of Trellis feeling calm. Maybe it’s the artwork, the simplicity, or the theme, but everyone I have played with has commented on how relaxed they felt afterwards. For these reasons, Trellis is an excellent game to play if you’re looking to ease into a big day of gaming or if your brain needs a break after a heavy strategy game. Trellis is also perfect for those lazy times when you want to play a game, but don’t want to deal with setup. Besides, have I already mentioned it’s really pretty?

Songs to check out include: Hidden Temple, The Descent, and Sounds from Shattered Seashells.

Songs to check out include: Moving On, Water Under Burned Bridges, Acting Your Age, and Night Light.

This suggestion is a little bit of a cheat since it’s a video, but Sir David Attenborough’s voice is so fitting that I couldn’t resist. Plus if you’ve ever wondered (like I have) if he suffers from hay fever, well now you know.