It’s brave to take a step into the well-trodden territory of tile-laying, especially with a theme as common as trains. To stand out, you have to bring something new and exciting to the table. Traintopia accomplishes this with an engaging drafting mechanic and some small additions to the usual tile-laying rules.

Each game of Traintopia consists of eight or nine rounds, depending on player count. Each round is broken up into three phases: Preparation, Draft, and Clean-up.

The Preparation phase simply consists of flipping the next round card that depicts what will be available to draft that round. 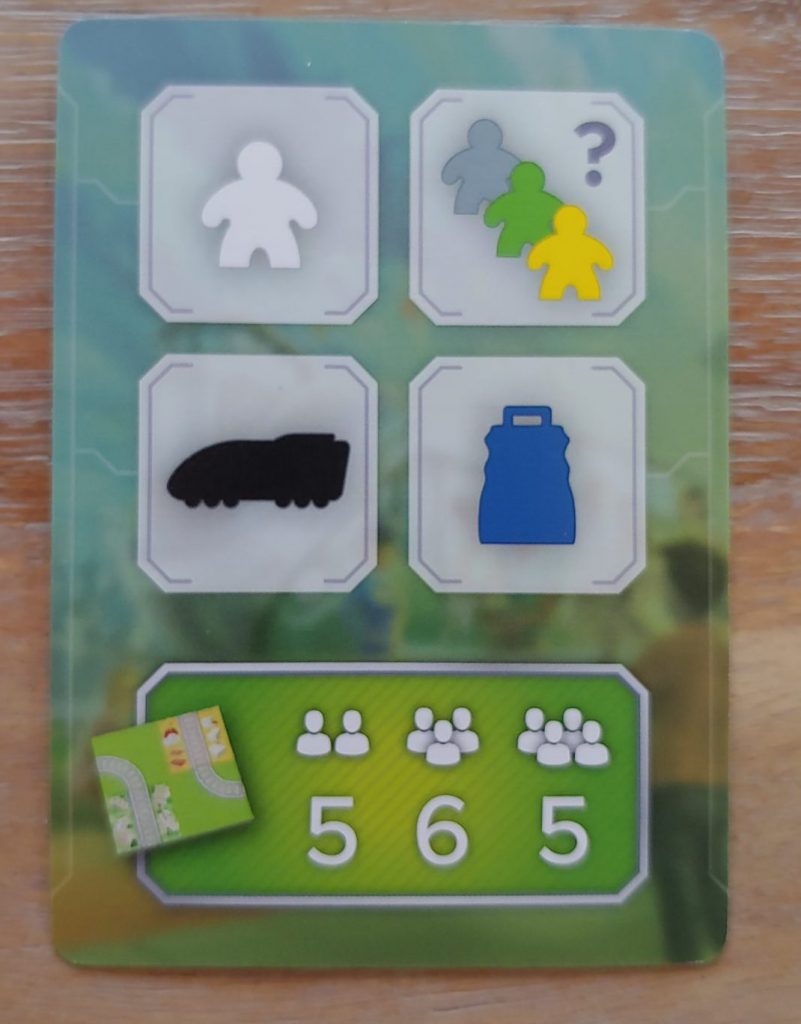 You would place a tourist, a random commuter, a train, and a mailbag onto this round card.

The Drafting phase is the heart of the game and is where most of the decision making takes place. You take turns drafting one tile or wooden piece at a time until only one piece remains. You can also choose to discard a piece for 1 point, which is a good way to take away options from other players if there is nothing of use to you.

When only one piece remains, you enter the Clean-Up phase. In this phase, you remove the piece that wasn’t drafted from the game and flip the next round card. After all the round cards have been flipped, each player drafts one piece from the end game bonus card, and the game ends.

After you draft a tile, you immediately place it into your network. The rules for placing tiles are simple: you can place your tile however you want, as long the tracks don’t create a dead-end or a loop. Train tracks must connect and can only end at stations or empty spaces. 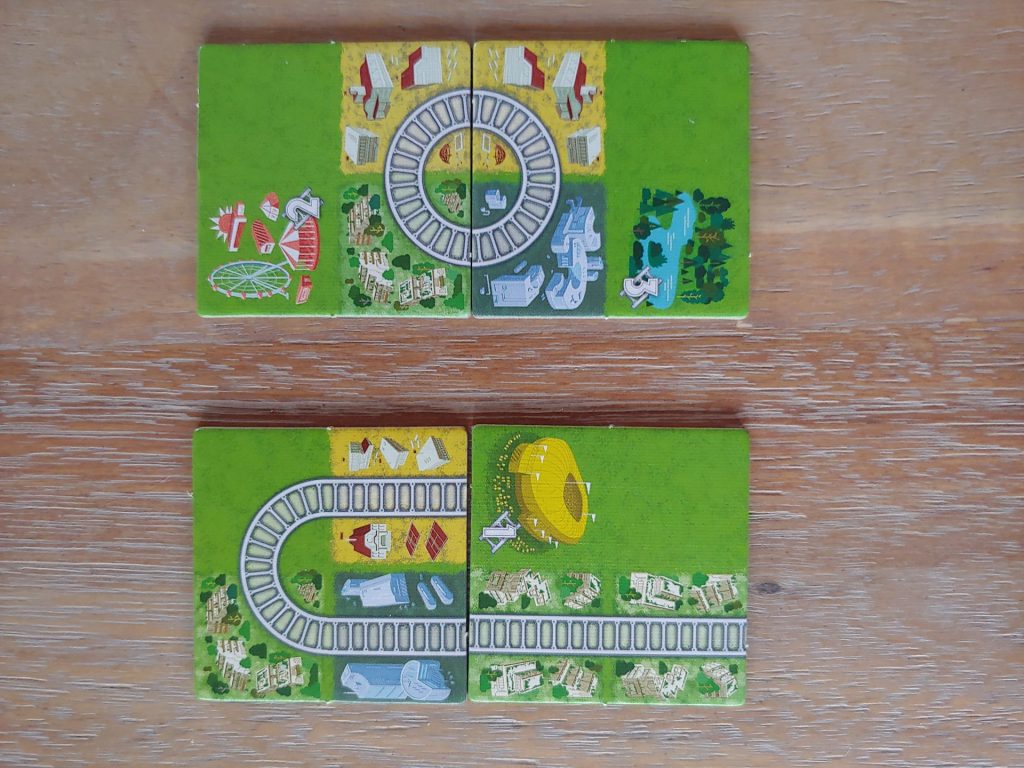 These placements are illegal because they have tracks that lead to dead ends or create loops.

You may also lay tiles so that only half of it touches another tile. This allows you to place your tiles in creative ways that you don’t see in many other tile-laying games. 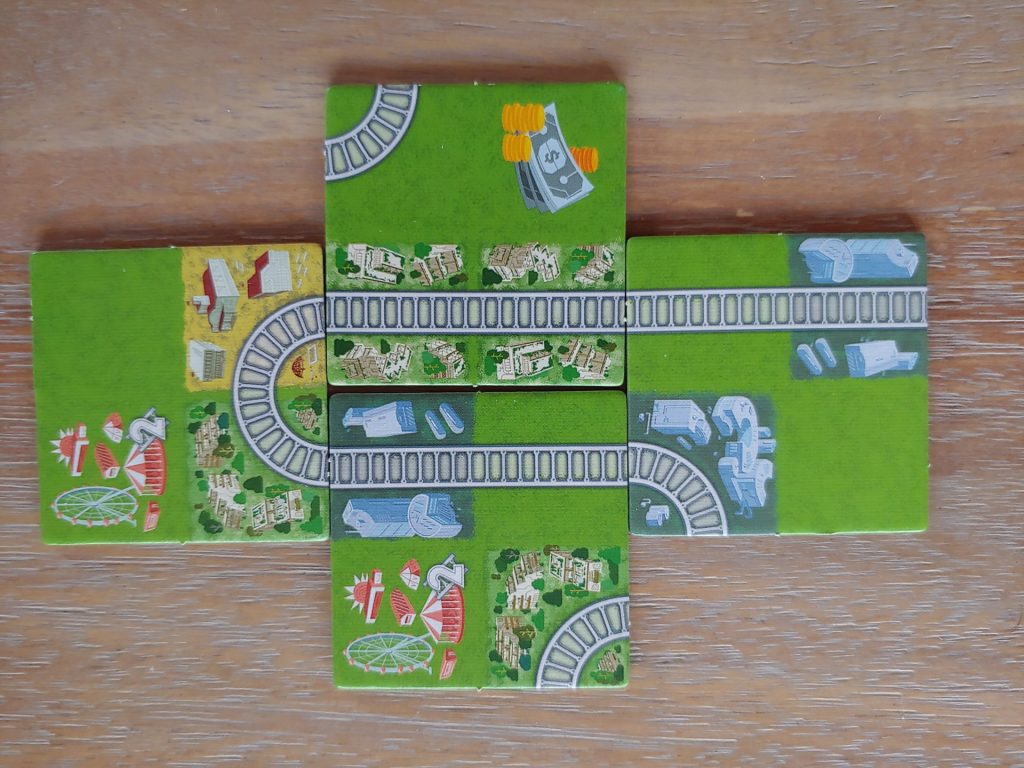 The majority of your points are likely to come from making finished tracks. Most of the time, you will be placing your tiles to try and create long, continuous tracks. However, even your longest track is only worth points if you manage to put stations on either end of it. You score more points for long tracks with different colored stations on both ends. There are limited stations available throughout the game, so you have to be careful not to get greedy.

This is one of the most effective ways that the game creates fun tension. If you wait until your track is long enough to earn the most points, you may have lost your chance to get the stations and you won’t earn any! The drafting of the tiles forces you to calculate your chances of being able to build your track and score it too. 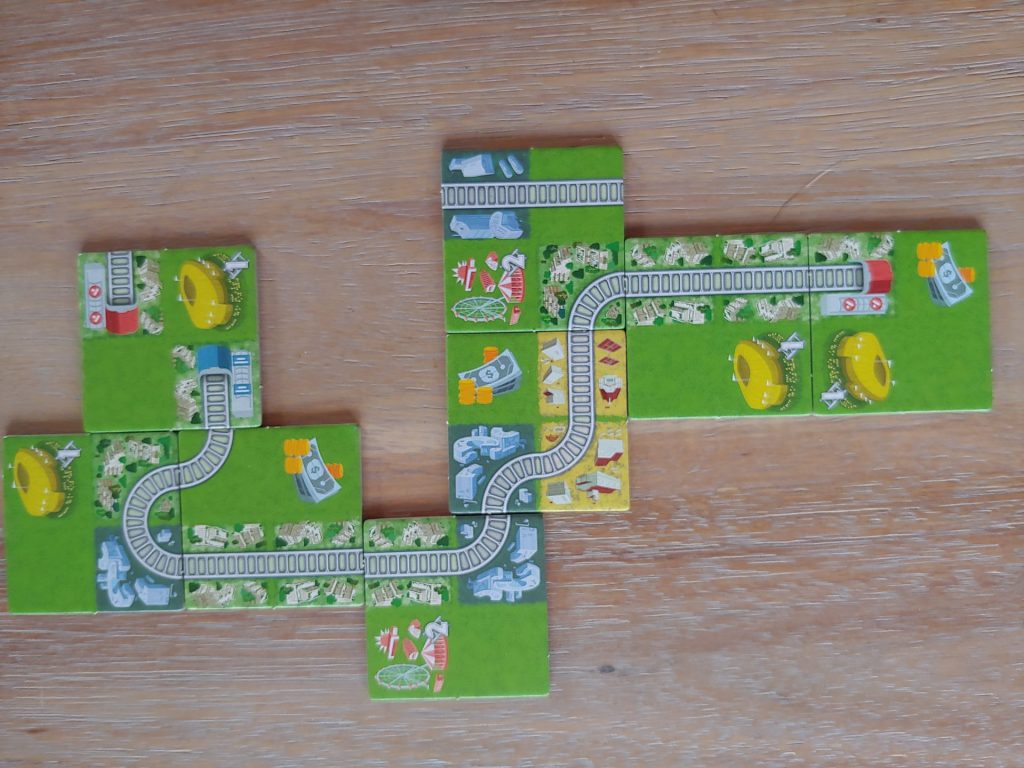 Any track is potentially worth a maximum of 10 points by including at least 8 tiles and having two different colored stations.

The fact that there are two different color stations is an added wrinkle that tempts you away from playing it safe. Maybe your track is already long and you just need one station to finish it. Then, a station comes out, but it’s the color you already have. Do you play it safe and grab it, or do you push your luck and hope the other color comes up so you’ll score more points? Even if it does, maybe someone else will beat you to it. All these considerations make the fight for stations fun and engaging.

All this will feel familiar if you have experience with tile-laying games. Fortunately, there is another element to Traintopia that makes it more interesting. In addition to laying tiles, several wooden elements are placed on your tracks to score points in different ways. Each one adds another layer to the decision making that separates this game from the standard tile-laying fare.

Instead of taking a tile on your turn, you may take one of the wooden elements on the round card. There are four different types of wooden pieces that may appear on each round card: commuters, tourists, trains, and mailbags. Whenever you draft a wooden piece, you must immediately place it on one of your tracks, and it will score points based on certain symbols printed on the tiles (districts, landmarks, and money).

Mailbags are the most straightforward wooden piece. Each track can only hold one mailbag, which doubles the value of a finished track. Mailbags can be a gamble. They are potentially one of the most valuable pieces in the game, but if you aren’t smart with them, they are worth nothing. Placing a mailbag on your track forces you to commit to finishing that track, and it may lure you into making the track longer than you have to for a huge chunk of points. 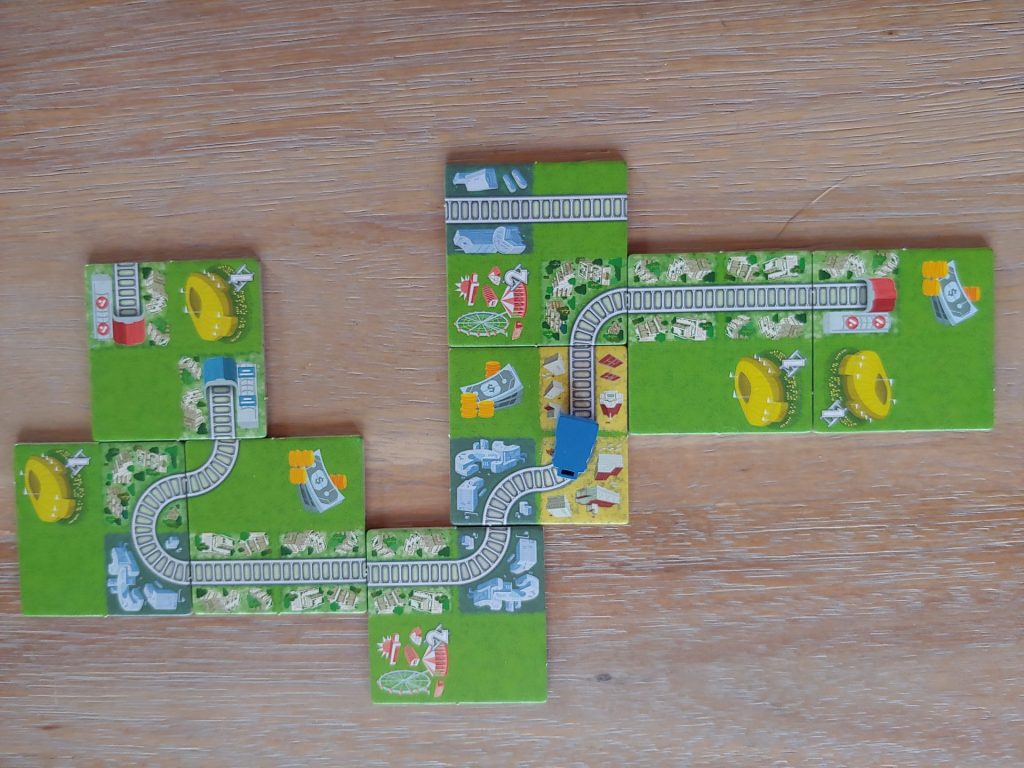 Because this track has a mailbag, now it’s worth 20 points!

Commuters are another wooden element you can draft and they come in three different colors (yellow, green, and gray). Each commuter called for on the round card is drawn randomly from the bag.

Printed on some of the tiles are districts that correspond to the commuter colors. When you place a commuter on a track, you score based on the number of districts that match its color. 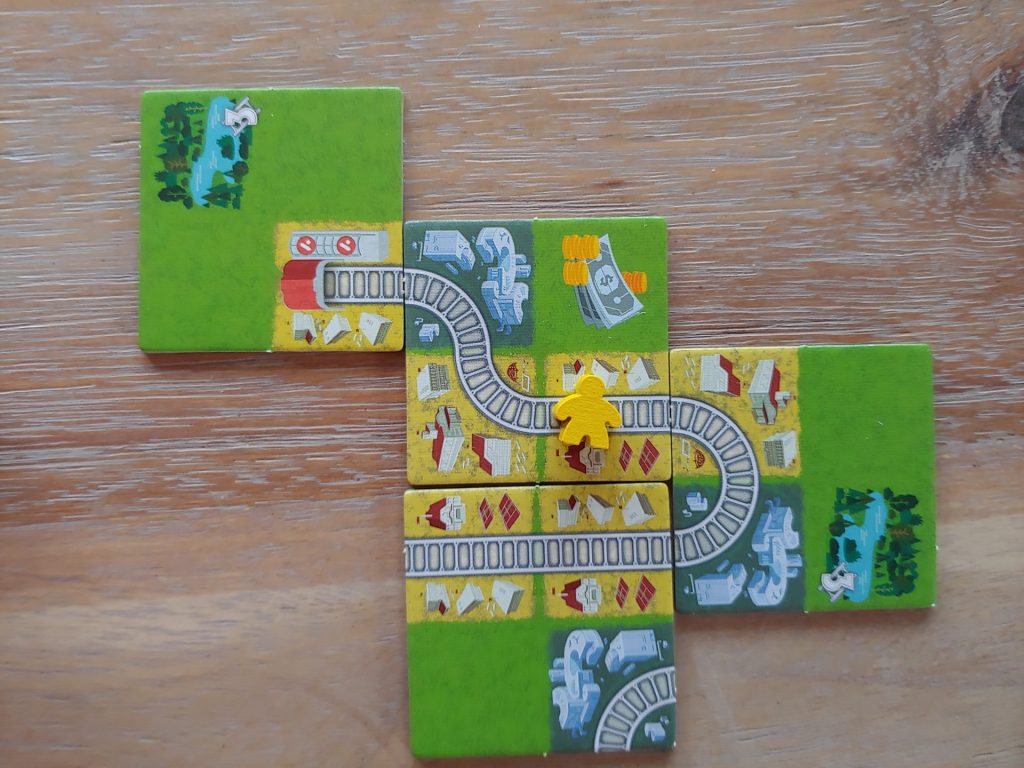 In this example, placing the yellow commuter will give you 6 points because there are six yellow districts on that track.

Each track can only hold one of each commuter color. Much like the stations, only so many commuters will be available each game and they are never guaranteed to be the color that you want. This presents another element you have to balance. Not only do you want to create long tracks, but you also want to create tracks that are valuable to commuters. You must also decide if your tracks will focus on one color district or diversify to be valuable to all the commuters.

Tourists, the white meeples, score based on the landmarks along your tracks. Landmarks are printed on some of the tiles and come in three varieties worth up to 3 points. Like the commuters, tourists must be placed and scored immediately after they’re drafted, and each track can only hold one tourist. 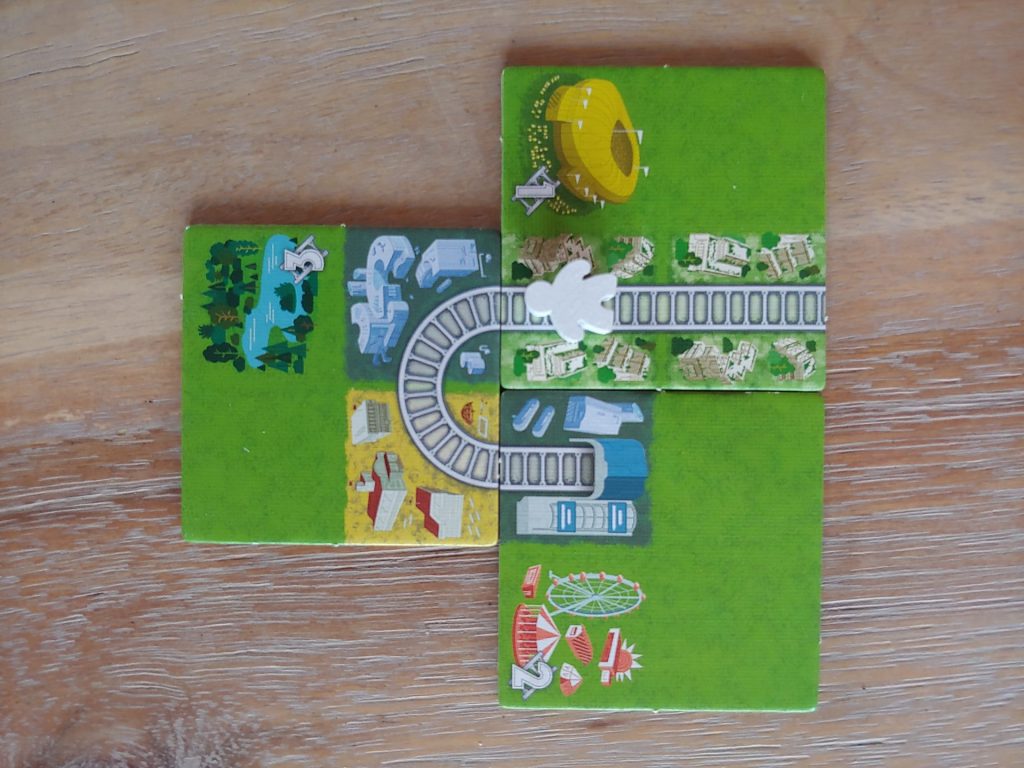 If you placed a tourist on this track, you would immediately score 6 points.

Landmarks and tourists have the potential to score a lot of points. It’s challenging to do, but landmarks can be placed so that they are adjacent to multiple tracks at the same time to get a lot of value out of them. 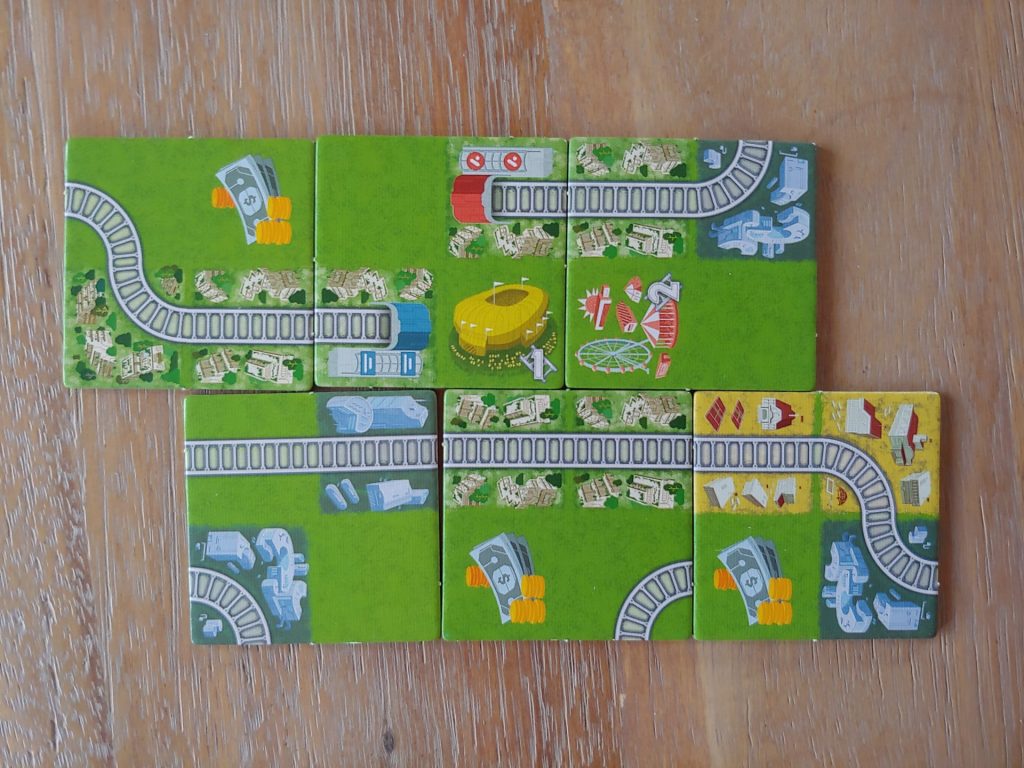 The landmarks in the center are touching three different tracks.

Anytime you draft a tile with a money symbol, you place a money token on that space. Money tokens can be spent to perform bonus actions, but unspent money tokens earn points from trains. You can use up to 3 money tokens to perform each of these actions once per turn:

After the last round card has been completed, each player drafts a piece from the end game bonus card. This card is the same every game and has a train, a mailbag, and two special pieces. One is the railhead, which is a small station tile that counts as either color and can be placed at the end of any track; the other is the railway inspector who counts as a commuter of any color.

Traintopia has familiar tile-laying elements that make it easy to learn and explain, but the small additions make a surprisingly big difference. There is a lot to consider with each piece you draft, but not so much that it’s overwhelming. This game is in the sweet spot between being welcoming to newcomers and giving seasoned gamers something to puzzle over.

Figuring out when to draft the wooden pieces is very enjoyable. You always want to wait until they are worth a lot of points, but waiting means you might not get what you want. You can mitigate this with money tokens, but maybe you want to save those to make your trains valuable. Everything connects in interesting ways that make it difficult to find the best option.

Each game won’t feel wildly different since you will be using the same round cards. However, the timing of the round cards can make a significant difference. A mailbag on an early round card can force you to commit to a track that may not get finished, while a mailbag at the end is guaranteed points. There’s enough variety from the tiles and round cards coming up in a different order that this game stays interesting after repeated plays.

There were a few drawbacks in my experience with the game. First, the trains felt underwhelming. Because they only score based on unspent money, they are usually only valuable at the end of the game if you happen to have money still lying around. A train is most valuable when there are 4 unspent money tokens, but you can usually get more points by spending the money on the various bonuses.

The bonus cards feel uneven. Some of the cards are very similar and not very interesting. They seem to be balanced, but not all of them feel like they add much to the game. This is a minor gripe because, at the very least, they still pull you in a particular direction and give you more things to consider when drafting tiles.

My biggest issue with the game is the player scaling, but this will come down to personal preference. I usually play games with 2 players. In Traintopia, you draft the same number of pieces with 2 players as you do with 4. This makes the game too open for my taste, and a lot of the tightness of the draft feels lost. In my 2 player games, we were usually able to complete all of our bonus cards and get all the pieces we wanted by the end of the game. It was still enjoyable, and some may prefer this, but I think the game is really meant to be played with 3 or 4.

Overall, Traintopia isn’t groundbreaking, but it’s solid fun. There are plenty of engaging decisions to be made, and the balance between building your tracks and placing the wooden pieces on them is a satisfying puzzle. If you are a fan of the tile-laying genre, there are new and interesting ideas here worth exploring. If this isn’t usually your style of game, this one probably won’t change your mind. With its quick play time, easy rules, and fun decisions, I say all aboard!