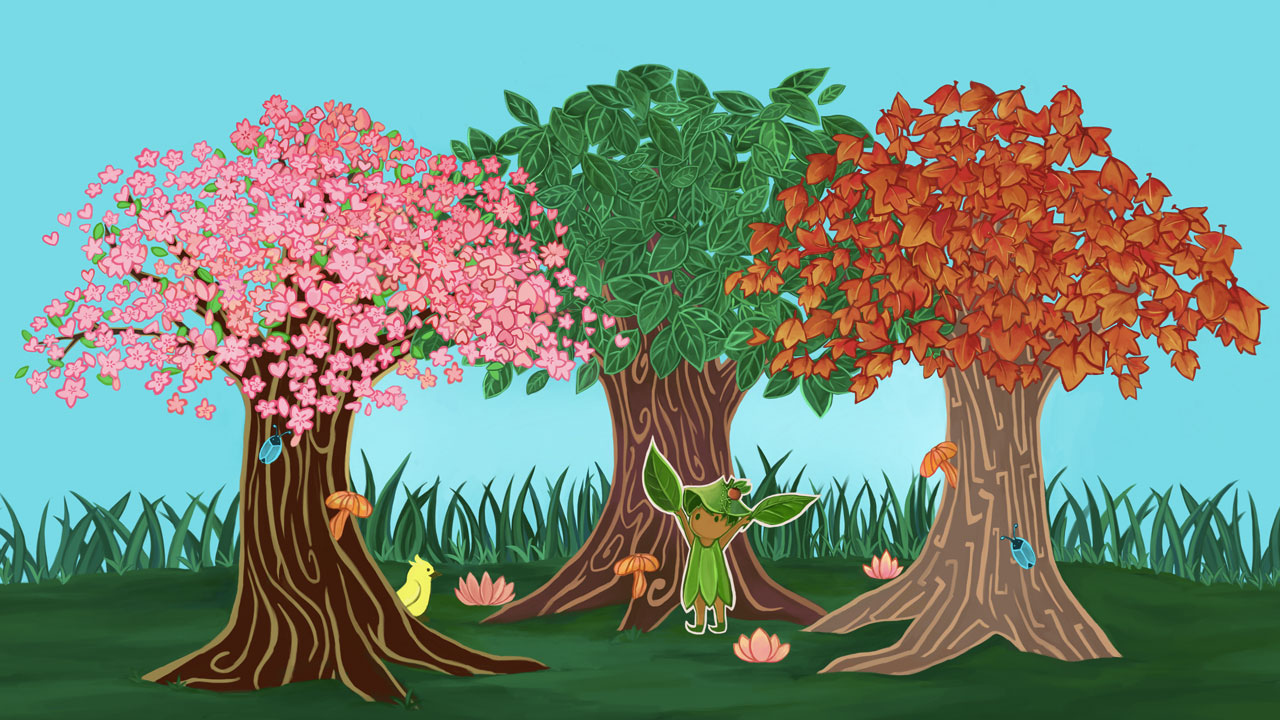 The Demigod of Trees has fallen. The power vacuum needs to be filled. Find out if you’re the one to fill it in our review of Tiny Trees!

The Demigod of Trees has fallen. Seduced by Maion, the God of Decay, and his promises of power, he has been cast out in disgrace. Now Fisaven, the God of Growth, is looking to fill in the recently vacated position. And he thinks that YOU could be the one. Now it’s time to prove you’re worthy.

In the game of Tiny Trees, players are going to be drawing a Branchlet card from one of three piles on their turn and then adding that card to their tree in an effort to create the largest, most diverse, and highest scoring tree by the game’s end. Points are scored from completed branches, Lifeforms living within the tree, and also the optional Blessing cards which add unique scoring opportunities to each game. At the end, each player will have a fully realized 3-D tree sculpture in front of them, but only the player with the highest score will win.

If you’re just here to read about what I think about the game, scroll on down to the Thoughts section. For everyone else…

To begin a game of Tiny Trees, each player will first assemble their Trunk. Then the Branchlet cards are divided into 3 even stacks and, depending on the number of players, a few might be removed from each of the stacks. Finally, the Flowers are placed nearby. The tallest player goes first. I swear I am not making this up. It’s right there in the rules.

Grow up, but don’t fall down

The rules for Tiny Trees are very easy. On each player’s turn, they will have the opportunity to grow their tree by adding to it. The player will either select a Branchlet or a Flower and add it to their tree following some simple placement rules:

The goal is to create high scoring Branches (which are a series of Branchlets that end in a Flower) without toppling over.

A game of Tiny Trees comes to an end when either two of the three Branchlet piles run out or all 8 Flowers have been used and one Branchlet pile has run out. Then final scoring is performed to determine the winner. Players earn points from a couple of different things:

Each branch scores 1 point for each type of wood (of which there are three types) that is the most prevalent within the branch. For instance, the branch in the example below would score 3 points.

Each tree also scores points for the different types of lifeforms living within the tree. Each lifeform type scores separately based on how many of that type are present in the tree. The more of a single type, the higher the score for that type will be.

Additionally, the players may earn bonus points from any Blessings that are present in the game (assuming the players opted to use them). Blessings may give you extra points based on specific Branchlet configuration criteria or change the game in some other way.

I really like the artwork in Tiny Trees. It’s an exercise in simplicity. The colors are warm and inviting and impart a nice earthy feel to the game which makes sense considering it’s a game about growing trees. Joanna Yu has done an excellent job bringing this game to life.

As for the game play, I have found Tiny Trees a very pleasing game to play, for the most part. Even though there is a lot of randomness introduced via the shuffling on the draw piles, there are enough interesting things going on to downplay the role of luck somewhat. This is especially true when you’re playing with the optional Blessings. For instance, during your turn you’re going to be presented with three possible Branchlets to choose from. Do you grab a Branchlet that will equate into more points at the end of the game or do you grab one that you think your opponent might need to deny them those points? Should you develop your strategy around the text on the Blessing cards or focus on creating high scoring branches instead? Or perhaps you should grab a flower before someone else does. These are just a few examples of some of the decisions you will be faced with.

As I implied earlier, not everything in this game is perfect. You may have noticed from the photos above that Tiny Trees consists of thin hexagonal cards that have been hand cut and then stuck together. This did cause some trouble during our plays. So much so, in fact, that it made it very difficult for me to convince people to give Tiny Trees a second try. The card stock is flimsy and can feel very fiddly at times as you’re constantly having to deal with the addition of a new card causing your previous cards to collapse due to them losing tension. I can easily see these cards getting torn or damaged over many plays. This is a classic example of bad components ruining an otherwise enjoyable game. The Kickstarter campaign will include a pledge level for a deluxe version of the game which will address these issues. Will that be enough? Only time will tell.

One other small issue that I ran into was that at least one of the Blessings seemed a little TOO aggressive in a two player game. This particular Blessing’s ability would fire once a player had completed a Branch with a very specific combination. That ability would allow the active player to effectively pick and choose what their opponent would do on their next turn which means the opponent would not get to take their turn. If the active player had prepared the specific combination multiple times, they could effectively takes several turns in a row. Realizing this, my wife and I decided not to play with that particular one. While we don’t mind some competition in our games, that specific Blessing just felt a little TOO mean.

All in all, Tiny Trees is a decent little game. It plays fast, it’s easy to learn, and it has a very small footprint. And there’s no denying the pleasant feeling you get when you’re able to gaze upon your finished trees. If nothing you’ve read here chases you away and you’re looking for an interesting filler, then Tiny Trees just might be what you’re looking for.

Groves Review – Guardians of the Trees

Cartographers Review – This Is Where You Draw The Line