The Great Barrier Reef off the coast of Queensland Australia is so massive that it can be seen from outer space, yet the card game from designer Keith Piggott and Travel Buddy Games is small enough to be carried in your pocket and played on even the smallest of tables. Travel Buddy Games is a new publisher dedicated to merging two passions: gaming and travel. Each game must be portable enough to carry with you and be thematically tied to a specific destination. They dove deep with their first release so keep reading to find out if this game is smooth sailing.

In The Great Barrier Reef Card Game players take turns building up their own section of the Great Barrier Reef with cards from their hand. They’ll attempt to arrange species of fish into one of five patterns selected at random at the beginning of the game. Each pattern will score a number of points at the end of the game based on adjustments made during gameplay. The player with the most points at the end of the game (when the draw pile runs dry) is the winner.

These fine creatures are the stars of the show!

The reef cards aren’t quite as diverse as a real reef, but extensive nonetheless.

Setting up the Game

The Great Barrier Reef is composed of nearly 3,000 individual islands and stretches over 1,400 miles from tip to tip

Setting up The Great Barrier Reef Card Game is quite simple. Shuffle the stack of scoring cards and deal out 5. Prepare the scoring cards by shuffling the 5 fish tokens and placing one face up on top of each scoring card. This has the effect of pairing that fish and pattern for the duration of this game. Additionally, place 1 scoring token on the pink space of each scoring card to set the starting value of that pattern.

Shuffle the reef cards then deal 3 to each player and 1 face up in front of each of the 4 number tokens. 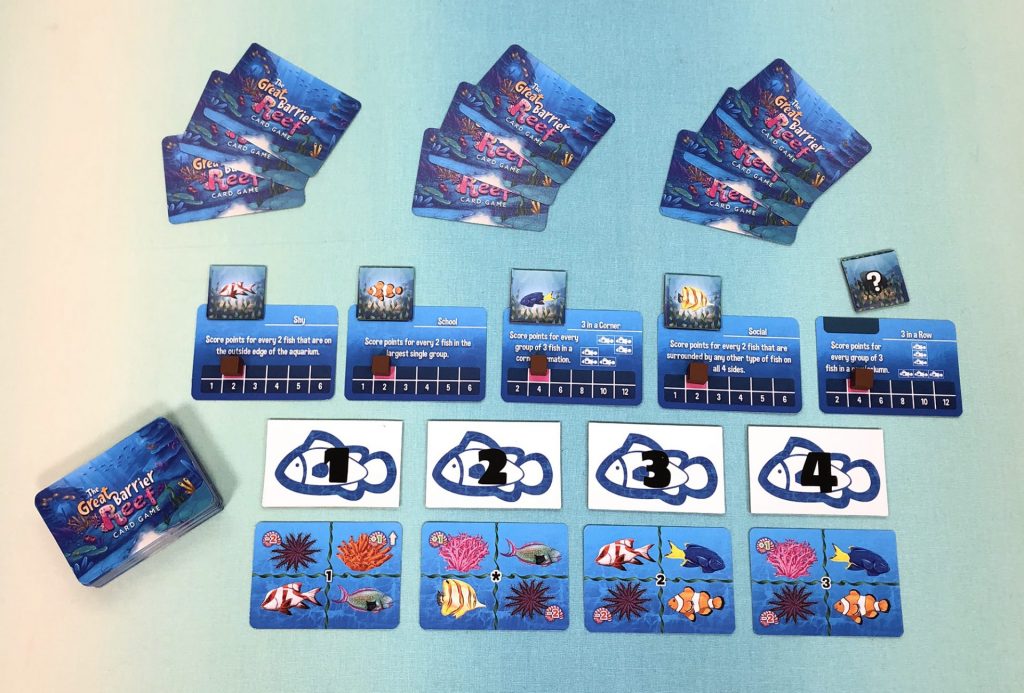 Here’s the game set up for three players.

On your turn you’ll place a card from your hand face up onto your reef. With the exception of the first card, all other cards must cover at least one quadrant of an existing card in your reef. Cards may not be placed underneath other cards and may not be rotated. 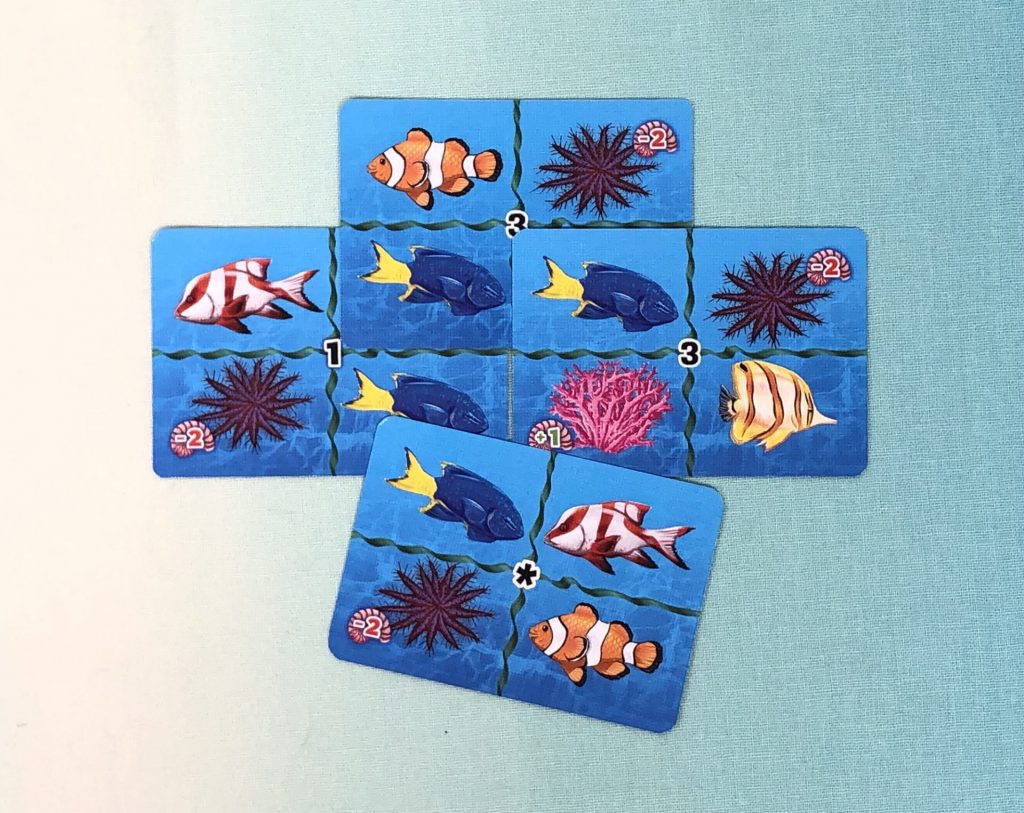 Placing this reef card will cover up a sponge, allowing you to increase the value of one scoring card. This particular card will also allow you to select from any of the four numbered draw piles.

If the card covers up a sponge you may move the scoring marker up by one on the scoring card of your choice. If it covers up a tiger shark you may adjust one scoring card upwards and another scoring card downwards. Finally you’ll draw a new reef card into your hand from the supply based on the number in the center of the card you played that turn. Refill the supply from the deck and continue playing until the deck runs out, at which time each player gets one more turn to lay down a reef card.

In 1981 the Great Barrier Reef was labeled a UNESCO World Heritage Site in an effort to give it some legal protection.

After all players have played their final card, add the matched patterns in your reef and the number of visible sponges and tiger sharks, then subtract points for each visible crown of thorns starfish. Easy peasy!

Here’s the reef scoring cards at the end of the game. 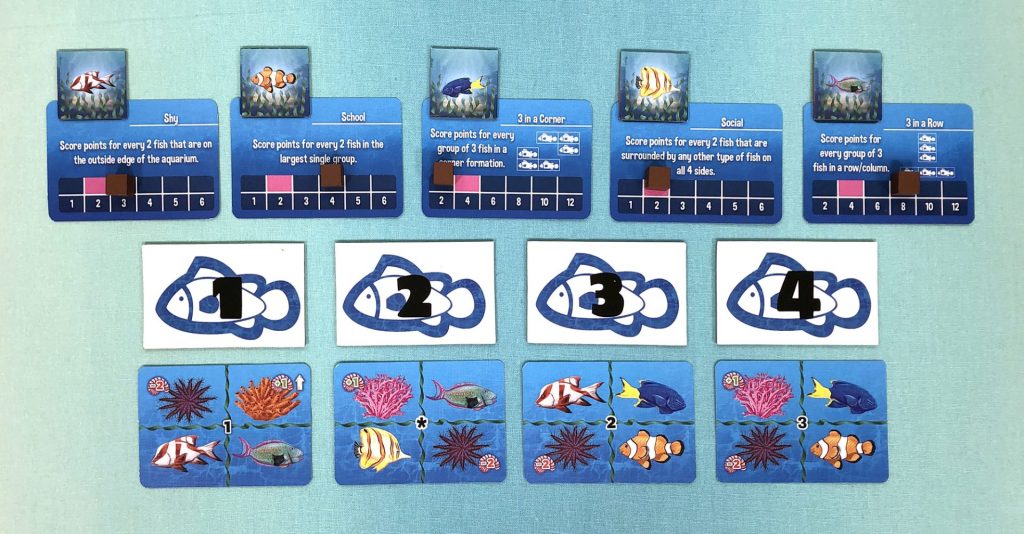 How much would this reef be worth based on the values above? 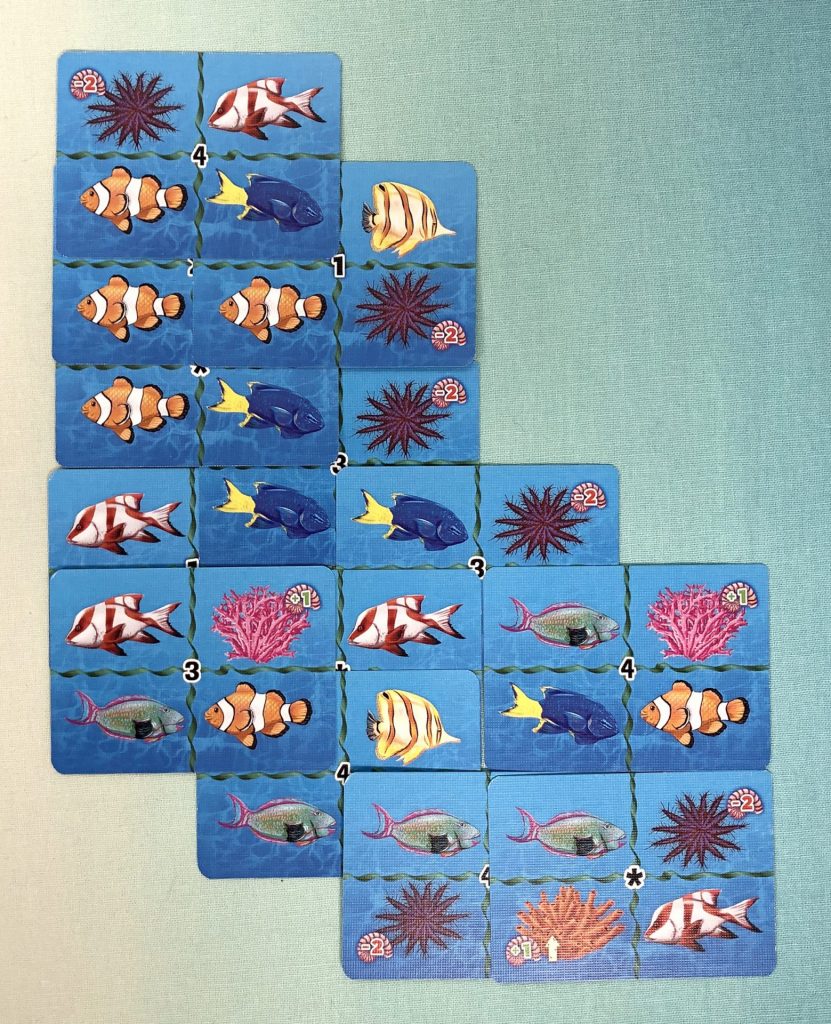 If you came up with 15 points then you’d be right!

Keeping up With “Current Events”

The Great Barrier Reef Card Game exemplifies the Travel Buddy Games mindset. Set smack in the middle of the largest organic structure in the world, the game is composed of just a single euro-sized deck of reef cards, a smaller set of variable scoring cards, and a few tokens. But even with the small number of components, the game is larger than life. The variability of the scoring cards combined with the rearranged fish tokens means that no two games will be quite the same. And because the card you play dictates the card you draw into your hand, players will need to think a turn or two ahead so that they can secure the perfect card to play on a subsequent turn.

Add in the fact that you’re able to dynamically adjust scoring by covering up sponge and tiger shark icons and you’ve got yourself a tense game with lots of fun and some really thinky moments. I predict this game is destined to become a family favorite for many people.

The Great Barrier Reef Card Game Kickstarter campaign ends on May 19th and is already funded. You can grab a copy for yourself for just $15, and as a nice little incentive every backer gets a gift card to Miniature Market.

If you enjoy playing games about coral reefs, you might also enjoy Reef.

The natural beauty and staggering scope of the reef encourages eco-tourism, but the very thing that brings in valuable revenue to the Queensland region and its people is also to blame for the harm being caused to the reef itself. Here are some links containing more information about the Great Barrier Reef.