I think it’s safe to say that everyone loves coral reefs: the riotous colors, the swirling schools of sea creatures, and of course the fantastic shapes of the reefs themselves. The reefs in nature are the result of thousands of years of development, but in Reef, the new game from Emerson Matsuuchi, you get to dive right in and build the coral reef of your dreams; or perhaps those of Salvador Dali. Win or lose, at least you get to build Nemo houses and have fun with your friends. 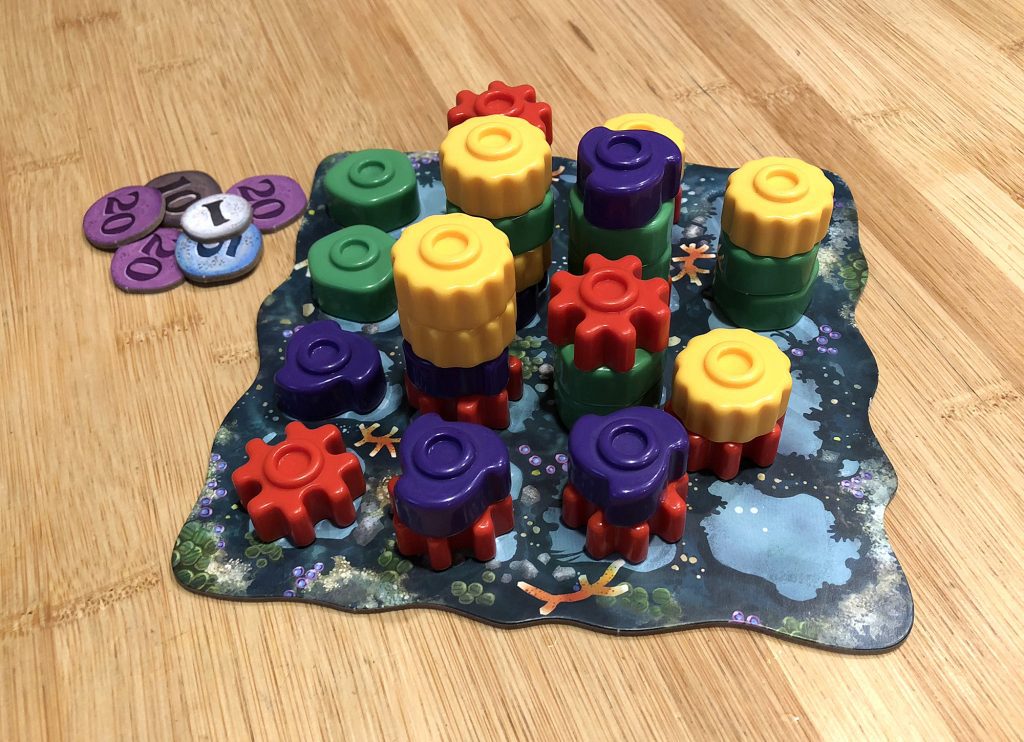 The first thing you’ll note when looking at Reef is the gorgeous cover, illustrated with exceptional skill by Chris Quilliams. The beautiful colors are showcased throughout the game in the rulebook, player boards, cards, and of course those reef pieces. I’ll talk more about those later, but suffice it to say that they’re one of the most striking parts of the game. 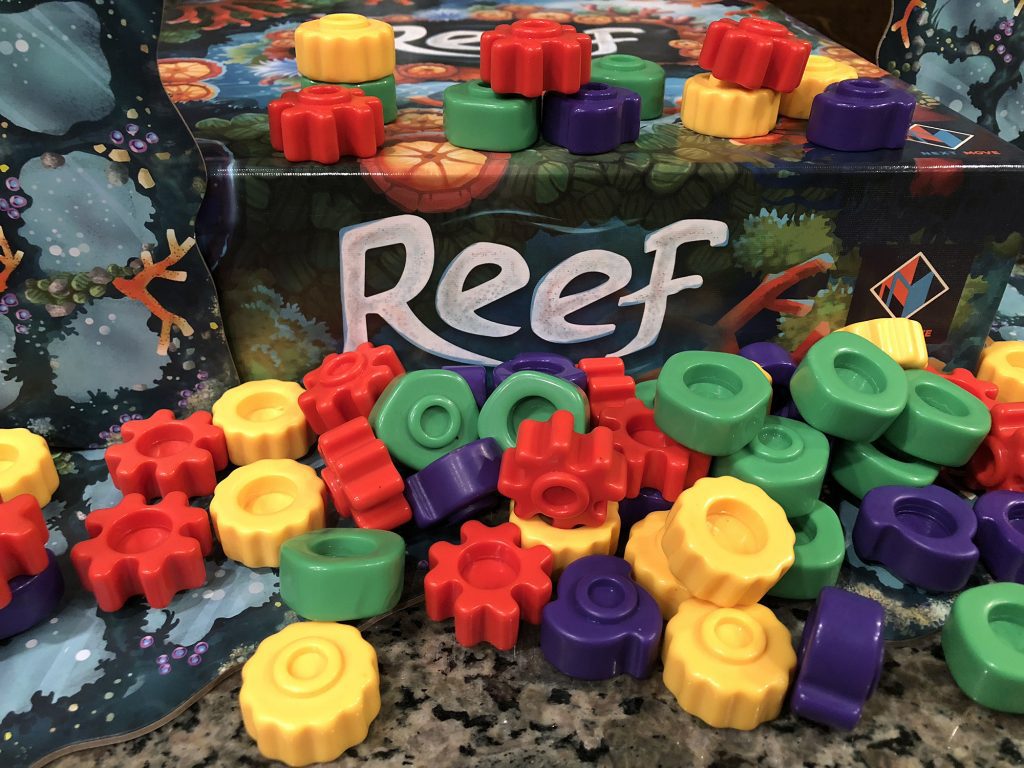 Pull out a player board for each player (making sure to include the one with the starfish in the corner), then shuffle and pass them out to all players. The player who receives the starfish board will be the first player (similar to the mechanism used in Majesty: For the Realm). It’s a simple and elegant mechanism for determining first player, and one I wish more designers would adopt.

Shuffle the deck of cards and pass out 2 to each player. Lay out 3 face up cards in front of the deck, and turn over the top card (note that this card behaves differently than the first 3…more on that later). Give each player one reef piece of each color to place on their board in the four center squares. After passing out three 1 point tokens to each player you’re ready to begin.

Reef is a simple game with hidden depths. Players are offered only two choices on their turn: draw a card or play a card. Clever players will be able to navigate those choices to earn the most points, which will win them the game.

Players are able to select from a choice of a shared pool of 4 face up cards. The first three cards can always be taken at no cost, but the 4th card is a “preview of things to come”. If the current player wishes to draw that card they must spend a point to obtain it by placing a single point on the card with the lowest point value (shown in the bottom right corner of each card). Immediately replace the selected card with a new card drawn from the deck. 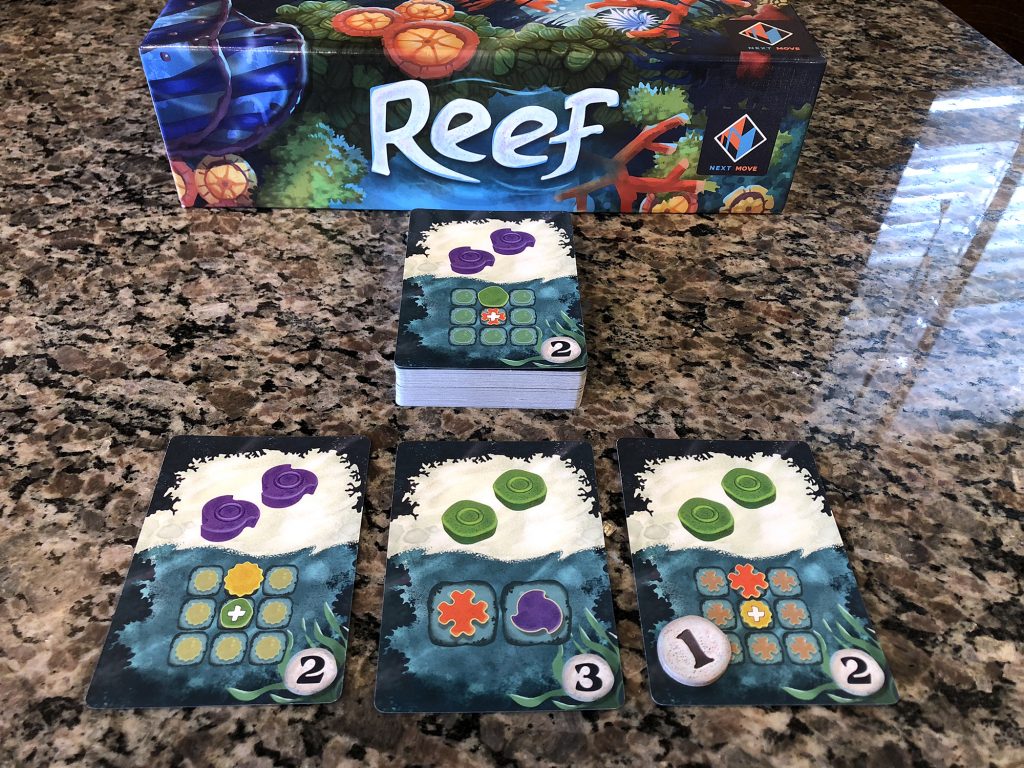 > If you hit the hand limit of 4 cards, you must play a card.

While drawing the right cards for your own strategy is important, playing cards is what allows you to execute your plan and hopefully net you loads of points. Playing a card involves two steps: placing reef pieces (mandatory) and scoring (optional).

Select a card from your hand and pick the two reef pieces shown at the top of the card, and place them on your personal board in any arrangement you desire, including stacking them. The only placement rule is that stacks may not go above 4 pieces tall.

To score a card, review the pattern at the bottom of the card just played. Looking at their board from the top down, players will collect point tokens for every unique occurrence of that pattern. Patterns must match exactly but the card can be turned in any direction to meet the board layout. It’s worth noting that you won’t score for every card played. Let’s take a look at a few scoring examples for clarity.

This player would score 3 points; 1 point for each stack at least 2 pieces tall, topped by any color.

This player would score 8 points; 2 points for each purple piece at any height surrounding your tallest red stack.

Three yellows in a row would score this player 4 points.

A game of Reef ends when either the last piece of a single color is drawn or when a drawn card can’t be replaced. In either case finish the current round so that each player gets the same number of turns. Before final scoring each player is allowed to score every card in their hand. But unlike normal scoring which allows you to get points for every occurrence of a pattern, this final scoring only allows you to score each pattern once.

Have each player add up their point tokens, and the player with the most points is the winner.

I’ll start by saying that Reef is a wonderful game. Sure Reef looks looks fantastic on the table, but this coral has hidden depths. It also offers fun, challenging, and clever gameplay alongside its good looks. The reef pieces have wonderful shapes, and they feel great in your hands…weighty and significant. But placing those pieces on your board is merely the setup for scoring, and patient players who plan ahead can haul in schools of points.

There’s great satisfaction in picking up a card that you can work into the combo you’re planning. But there’s also some distress because nearly every card that gets turned over could allow you to extend that chain you’re building. Do you pick up that extra card now and delay your plans, or do you execute your tactic on this turn, but miss out on an extra few points next turn? The point spread is generally not extreme, so even five extra points could mean the the difference between victory and defeat. You also need to continuously monitor the supply of reef pieces as you could run out of the colors you need to bring your scheme to fruition. 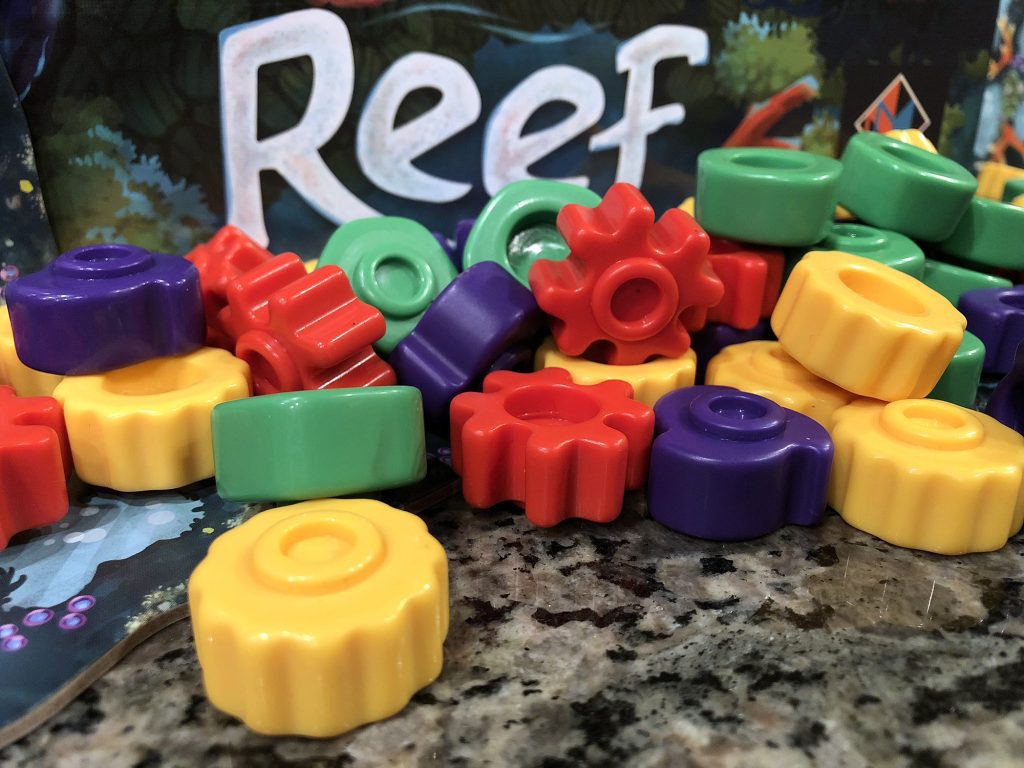 Reef does have a few minor issues though, at least in the copy we received. While the colors are vibrant on the box, the rulebook was noticeably more subdued. It’s likely it was just a printing issue, but it’s something I notice every time I open the box. Also while the pieces are great, some of the pieces had a thin film of some sort of oil on them, sort of like WD-40. I imagine that it was something sprayed onto the pieces to prevent them from sticking together, but I had to wipe it off before playing. Neither of these issues were a Great Barrier to my satisfaction with Reef.

Finally, it’s worth calling out the inevitable comparisons that Reef has been getting to Azul. It’s from the same publisher, and occupies the same space; a light to medium weight family style game. It’s a shame because that’s where the similarities end. Reef is from a different designer, has different mechanisms, and is really just a different game. That said: if you like Azul, then you’ll probably love Reef. 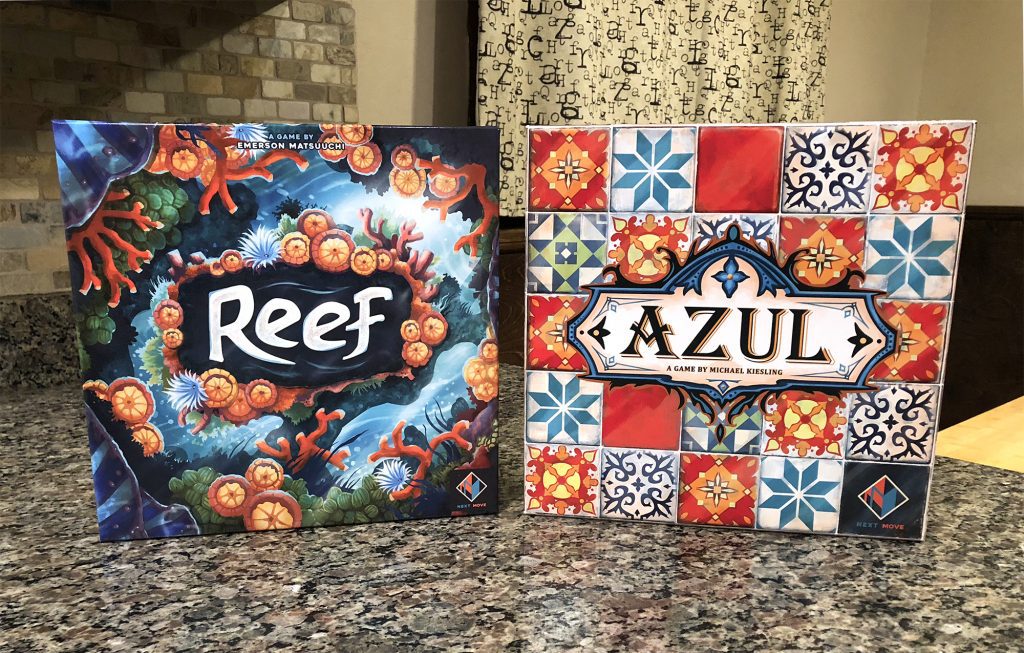 If you and your gaming group enjoy fun, family friendly games that require some thought, or if you’re a fan of abstract games with wonderful artwork and clever gameplay, then Reef belongs in your collection.