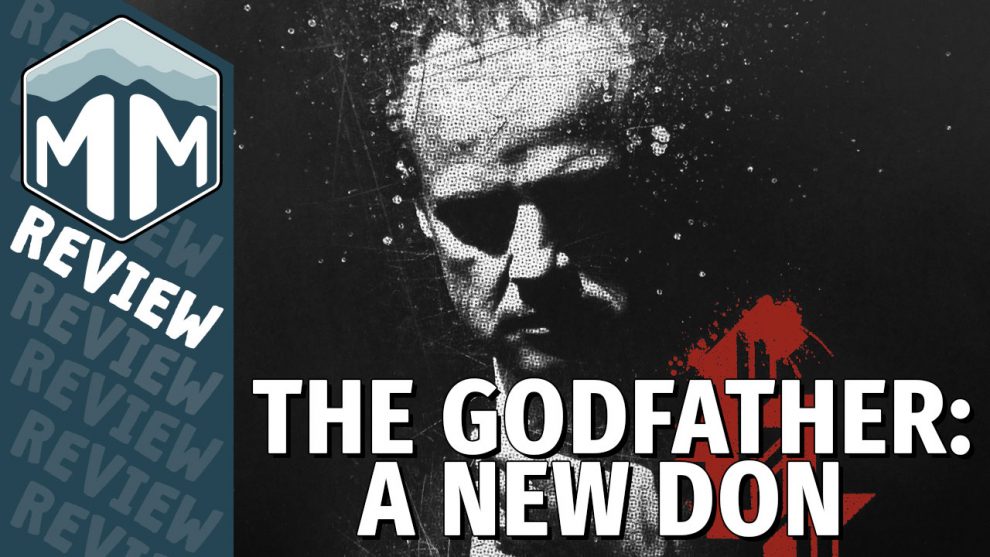 Andy Matthews @commadelimited
Take control of a mafia family in 1950's New York. Roll your dice and offer favors to the Godfather, while positioning yourself to take his place. Sleep light, or sleep with the fishes, in Godfather A New Don.

The Godfather: A New Don Overview

Originally released in 1972, and based on a book of the same name by Mario Puzo, The Godfather is a classic of American literature and cinema. The movie is filled with characters who are brutal and violent, yet show remarkable integrity, honor, and loyalty. Set in the late 1940s and early 1950s The Godfather details the rise of the Corleones, a small New York crime family.

The Godfather: A New Don is a dice based area control game which pits players against each other in a fight to control the boroughs of 1950s New York City. Players fight to become the Godfather receiving all of the benefits that position entails. Roll your dice, place your soldiers in neighborhoods around the city, muscle other players out of territory, and use your own personal strategy to become the next Godfather. 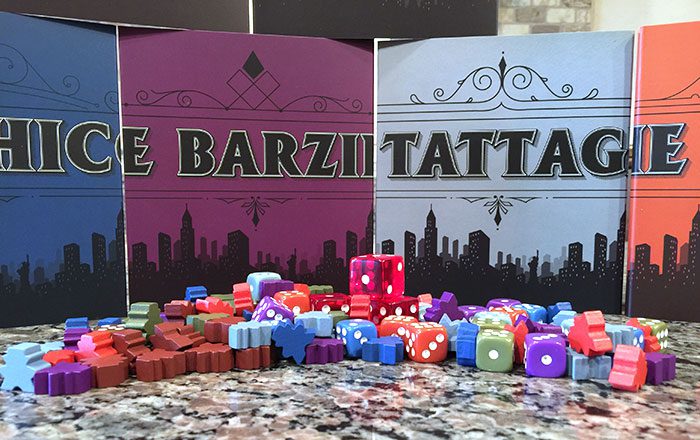 How to Set Up The Godfather: A New Don

The Godfather: A New Don plays 3-6 players and offers a double sided board: one side for 3-4 players, and the other for 5-6. Select the correct board for your player count then set up the game in the following way:

How to Play The Godfather: A New Don

A turn in The Godfather: A New Don is comprised of 5 steps, and are performed in the following order:

Throughout the game players will have the option of “betting on Vegas” which allows them to send soldiers to a single pip value in the Vegas area. The current Godfather will roll all three Vegas dice and assign them to any player with a soldier on a matching pip value. The player receiving a Vegas die takes the die behind their screen along with the soldier who won the die. The player can choose to lock in this value, or roll it along all of their other dice. This phase is skipped on the first turn of the game.

Players roll their dice behind their screens. Each player selects one of their dice to use in requesting a favor from the Godfather. Players then simultaneously reveal that die by placing it in front of their screens.

Starting with the Godfather players use their dice to do one of three things, in any order they choose. Players may also call their soldiers back from the Favor track at any time, using the ability associated with that favor. 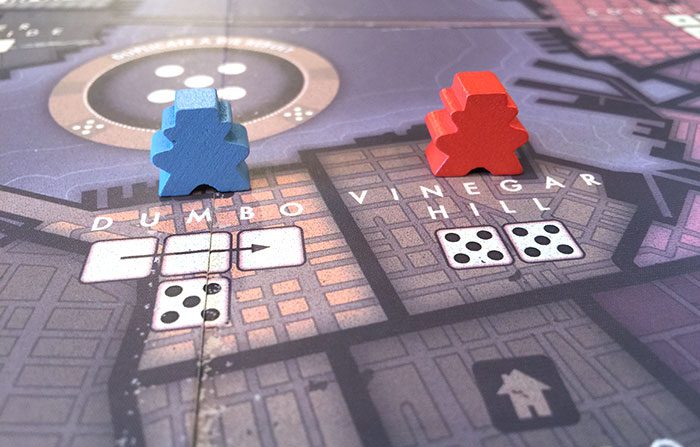 Bet on Vegas – Players may send one soldier to Vegas for each die they spend in this manner. The pip value shown on the dice is irrelevant for this action. A player may choose a 1 and a 3 to send two soldiers to Vegas, placing them on the 2 and the 4 spaces. Only one soldier is allowed for any spot. If the Vegas track is full, players may not use this action. 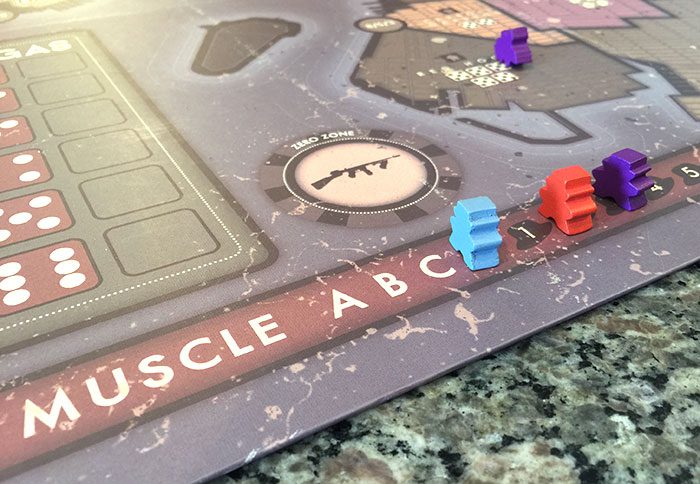 Muscling Out an Opponent

There will be times when players will roll the dice for a neighbohood which has already been claimed. This is where the muscle track comes into play. It’s possible to kick out another player from a neighbohood IF your soldier ranks higher on the muscle track. If this happens, the soldier getting the boot is placed on the corresponding Favor track space. That is to say if a player is kicked out of Red Hook (in District 5) that soldier would be put on the 5 space of the Favor track.

The role of Godfather is always given to the player whose soldier is furthest along the muscle track. At the end of the round any player with a soldier currently on the muscle track is moved to the left, maintaining player order. The player furthest ahead places their soldier on the 3 spot and becomes the Godfather for the next round. Any player whose soldier is currently in the Zero Zone is unaffected. 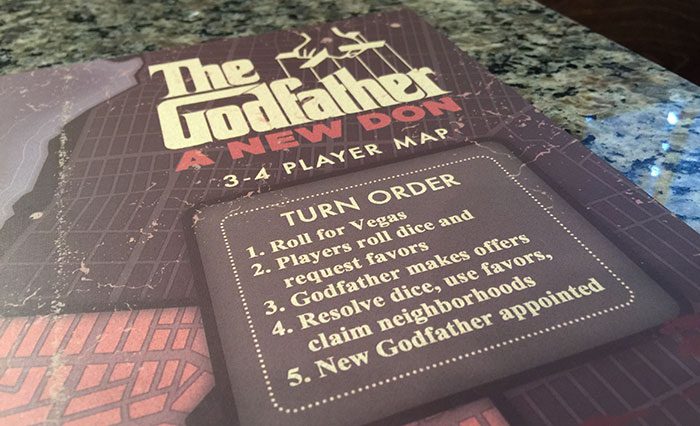 Special abilities via the Favor track can’t be underestimated. Let’s break them down here.

The game ends when one or more districts are completely full. Finish the round and begin scoring.

Players win The Godfather: A New Don by having the most points which are earned by controlling the most neighborhoods in each district at the end of the game. Each neighborhood offers 1st, 2nd, and 3rd place point values as indicated in that area. 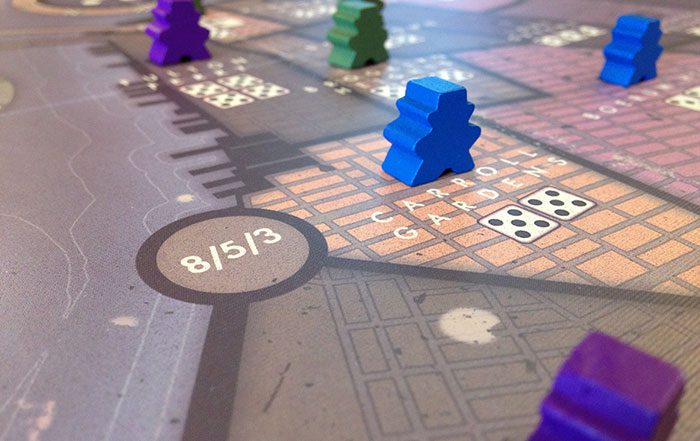 In the example above, purple and blue would tie for first place with 2 soldiers apiece. Ties in this game are unfriendly, with all tied players receiving the points for the next value down. That means that blue and purple would each score 5 points. The green player would score 3 points for having a single soldier.

After scoring all neighborhoods, players count up the number of soldiers they have next to their player shield. The player with the most soldiers receives 3 points, the second place player receives 2, and the 3rd place player receives 1. Ties are resolved in the same fashion as neighborhood scoring with tied players bumping down one rung. Soldiers on the favor track do not count towards this final scoring; and soldiers in Vegas…well, what happens in Vegas… 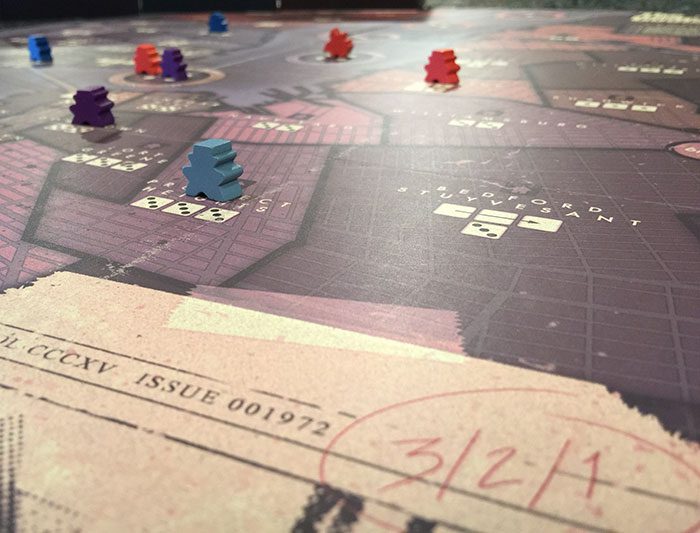 The player with the most points at the end of the game is the winner. In the case of a tie, the player furthest along the muscle track is the winner.

What I Like About The Godfather: A New Don

I’m a sucker for a good area control game. Being able to outmaneuver your opponents is a rush. Arranging and moving your soldiers to win the game feels thematic. The Godfather: A New Don offers an area control mechanism with a twist, using dice to dictate what areas are eligible for placement. This might turn some players off as the randomness inherent in dice make strategy almost moot. But this is where the Favor track and/or becoming the Godfather really shine.

Choosing which die when asking for Favor from the Godfather is core to the strategy of the game. Do you choose a die you don’t want for yourself but might offer only a paltry reroll, or do you sacrifice a 4, 5, or 6 so that you can get soldiers onto the most valuable Favor spaces and set yourself up for future turns?

In a 6 player game the Godfather will potentially have 5 additional dice at their disposal. This means they have more than twice as many options as other players. Sen and Jay, the designers of the game, counter-balanced this strong position by not allowing the Godfather to cash in Favors on their turn. 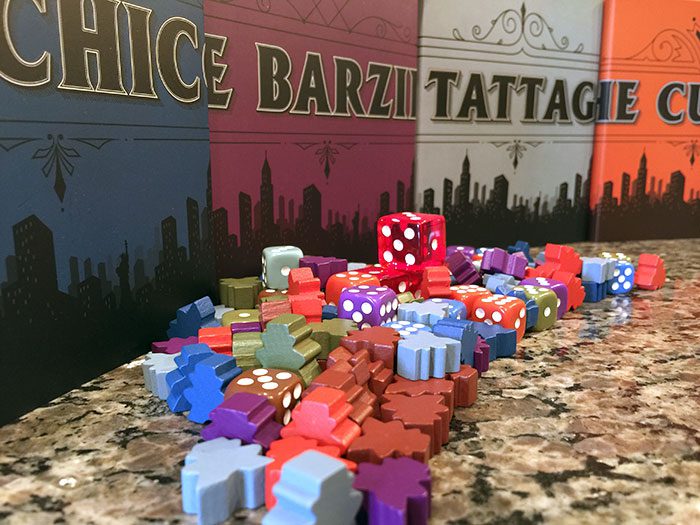 Don’t forget about Vegas either. Sacrificing a single soldier to get 1 or more extra dice on a future turn can be a huge win.

The components in The Godfather: A New Don are excellent. The box, board, and player screens are all REALLY high quality; thick and durable with an excellent finish. The dice are well made and feel good in your hand; especially those Vegas dice WOW! 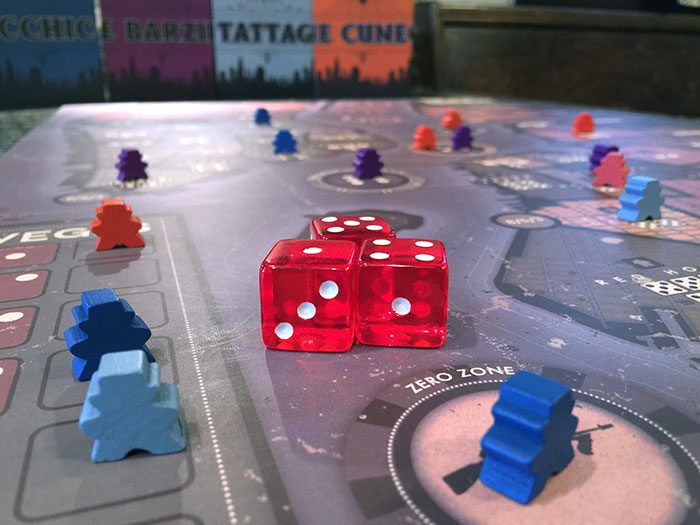 Whether by intent or mishap, the soliders for each player are just a tiny bit different from each other. Some are tall with taller hats, while some look shorter and fatter. It’s not super noticeable, but it adds a bit of interest to the game and makes you feel like your soldiers are all different people. We didn’t go so far as to name them…but it was a close call. 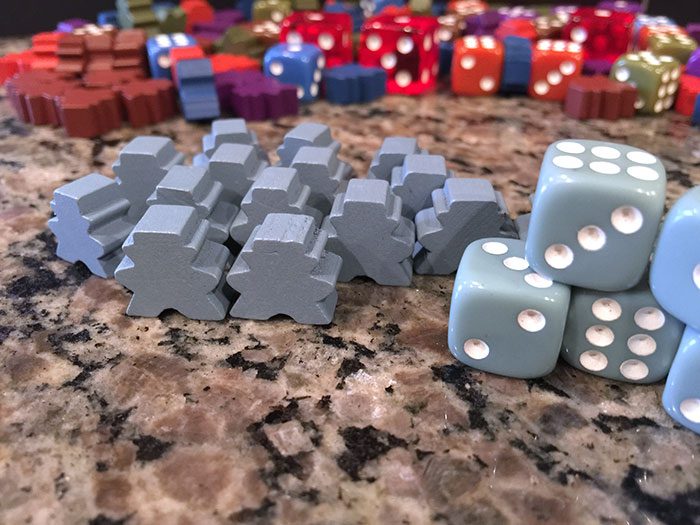 Sen and Jay did a solid job coming up with ways to mitigate the randomness of the dice. Vegas dice, Favor abilities, fighting for the Godfather role to rake in the extra die and they’re all designed to level out the playing field.

What I Dislike About The Godfather: A New Don

The Godfather: A New Don is a solid game, but it’s not without its flaws. Because the game is completely dice based, players who don’t like luck based games will feel adrift in a sea of randomness.

The player screens are elaborate affairs. Though well designed, thick, and tall they are completely devoid of any purpose other than to hide your dice and soldiers from other players. It would have been so easy to print turn order and Favor track abilities on the inside for reference. In fact I’d strongly recommend that IDW consider doing this in future print runs. The board is so long that reading Favor abilities from the other end of the board, possibly upside down, is a pain

The biggest gripe I have with the game is districting. The rulebook mentions districts a number of times, even going so far as to refer to them by name (district 1, district 5, etc.), but there are no labels for districts on the board. It took us about 5 minutes on our first game to understand that a district was a grouping of neighborhoods which all had the same number on them. So all spaces with 5 as their primary number were part of District 5. The game board is beautiful and well laid out with easy to read text, but there’s no clear defining line between districts. This made scoring really tough because you had to check each neighborhood individually to determine which district it was in. It would have been SO much easier if the artists would have added a clear delineation between districts. Tammany Hall, another area control game set in New York did this quite well.

I recommend that in future print runs a more obvious dividing line is added to the board.

Lastly because the game ends when a single neighborhood is filled, it can be really easy to end the game without realizing it. This could also be considered a positive, but in two of our games a player untentionally made a move which ended the game; primarily because the dividing lines weren’t clear.

Final Thoughts on The Godfather: A New Don

I was really excited to play this game when I first saw it reviewed by Dan King (The Game Boy Geek). The colors are interesting, the art and board are beautiful, and it has dice…lots of dice. In fact, it should be clear by now how I feel about dice games.

The game plays quickly, it’s fun, and the way you optimize your turn with the favor track abilities really adds a lot to the game. The components are top notch and the theme is just fun and unique.

If rolling dice, area control games, or The Godfather theme are your cup of tea then you’ll certainly want to leave the cannolis and bring along The Godfather: A New Don. 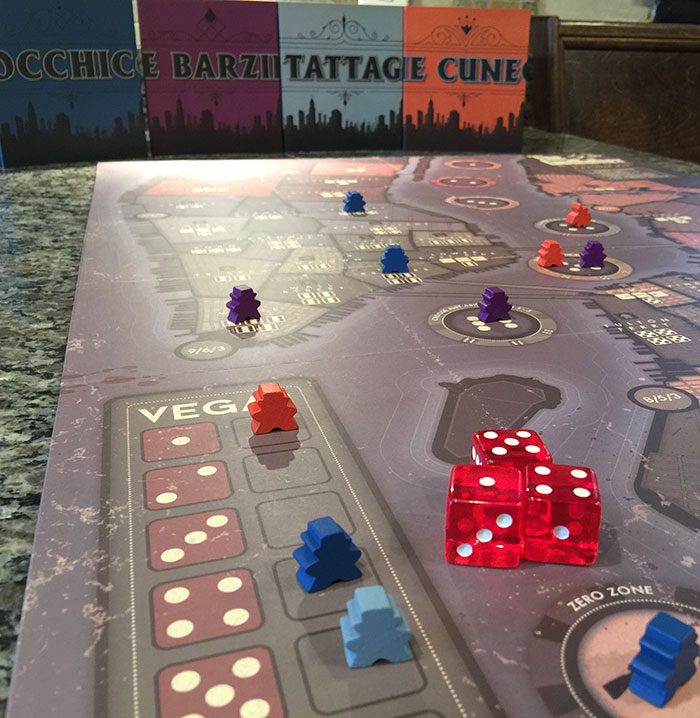 What do you think about The Godfather: A New Don? Give us your opinions about what you like and/or dislike about the game in the comments below!

The Godfather, A New Don details 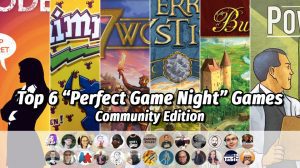 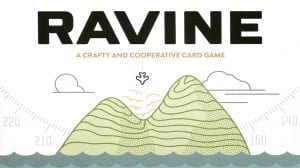 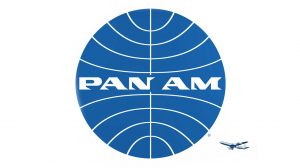 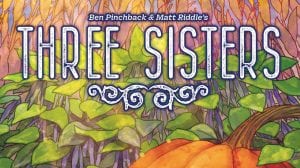