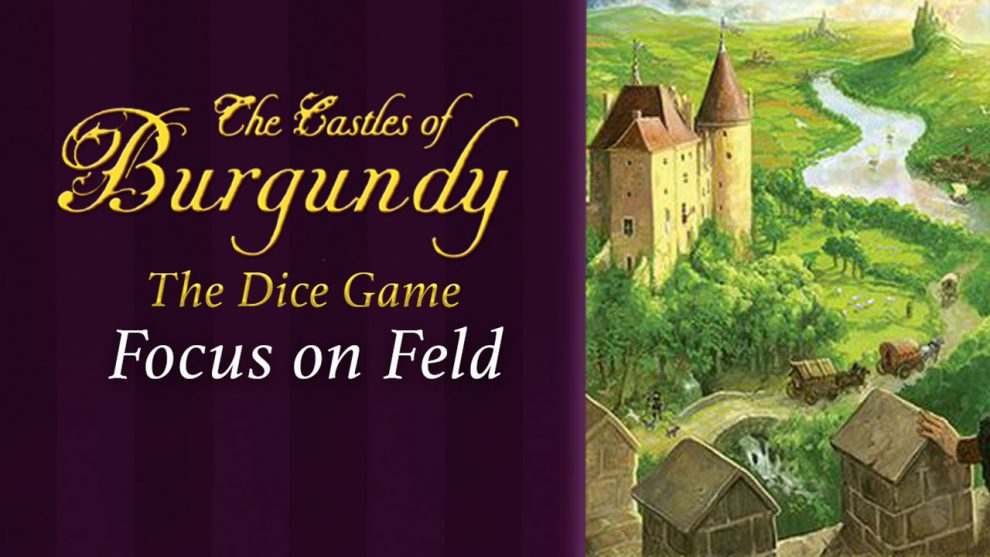 David McMillan @FeldFreak
3 Comments
What happens when a designer turns one of their most well known works into a dice game? Find out in our review of The Castles of Burgundy (The Dice Game)!

Hello and welcome to Focused on Feld. In this series of reviews, I am working my way backwards through Stefan Feld’s entire catalogue. With the exception of 2 of his older games, I have hunted down and collected every title he has ever put out. It’s my hope that by the time I get to writing about those titles I’ll own them too. Today we’re going to talk about 2017’s The Castles of Burgundy (The Dice Game), his 25th game.

The Castles of Burgundy was originally released in 2011 and garnered high praise for its innovative mechanics and clever gameplay. Since then, it has been reimagined in 2 different formats — the card game, published in 2016, and the dice game which is the subject of this review. As of the time of this writing, The Castles of Burgundy is the only title that Stefan Feld has ever reimagined in another format.

If you’ve ever played The Castles of Burgundy (CoB), then the goal of this game should sound familiar: build up your duchy in order to score the most points. What’s changed, though, is how you go about managing that. Instead of rolling two dice to obtain 2 pip values to spend on your turn, a communal pool of 5 dice will be rolled and the players will get to pick the number and color combination that they want to work with. There will always be 2 numbered dice available and 2 colored ones.

Each color corresponds to one of the regions on the map shown on the player sheet. Inside each colored hex is an empty box and this is where the selected number from the numbered dice is printed. The trick, though, is that the different colored areas have restrictions as to how they can be filled in. For instance, certain colors can only accept specific dice values while others require that each space in the same color area be filled with a different value. And, like any good Roll and Write game out there, the game is jam-packed with bonuses for meeting certain requirements — points for being the first to fill in all areas of a specific color or the ability to manipulate the die results, for instance.

The fifth die is an hourglass die. This is used to mark the length of the game’s 3 phases. The different phases are functionally no different from one another save that the bonus points awarded for filling in same-colored areas decrease as the game wears on. Once the final hourglass in Phase 3 is filled in, that round is completed, the game is over, and the player who has the highest score wins.

This is a high-level overview of the game. If you’d like to find out how the game is played, read on. Otherwise, feel free to skip ahead to the Thoughts section.

To begin the game, each player is given a player sheet (their “duchy”) and a pencil. There are four different duchies in the game (labeled A, B, C, or D) and every player will be playing with the same one. These different duchies all play the same but feature different color layouts; some easier than others. Then one of the players is given the 5 dice. We’ll call them “the active player”. They will be rolling the dice for the entire game.

Next, each player chooses one of the green castles in their duchy and draws an ‘X’ in the box. Each time every box in a same-color area has been filled in, it results in the player receiving some sort of bonus. Since each green castle area only consists of a single space, putting the ‘X’ in the box causes the entire area to become filled in. So, the players will then select one of the green castle bonuses and draw a circle around it. The method for using bonuses will be discussed later.

At the start of a round, the active player will roll all 5 of the dice. The hourglass die will roll either 1 or 2 hourglasses and the appropriate number of hourglasses are checked off for the current phase. While it isn’t necessary for every player to mark these off, at least one player should be doing it. The rules suggest the active player, but it could be any player of your choosing. In fact, as long as one person has been assigned this responsibility, there’s no reason the dice couldn’t be passed around from player to player at the end of each round so that everyone gets to roll them at some point. 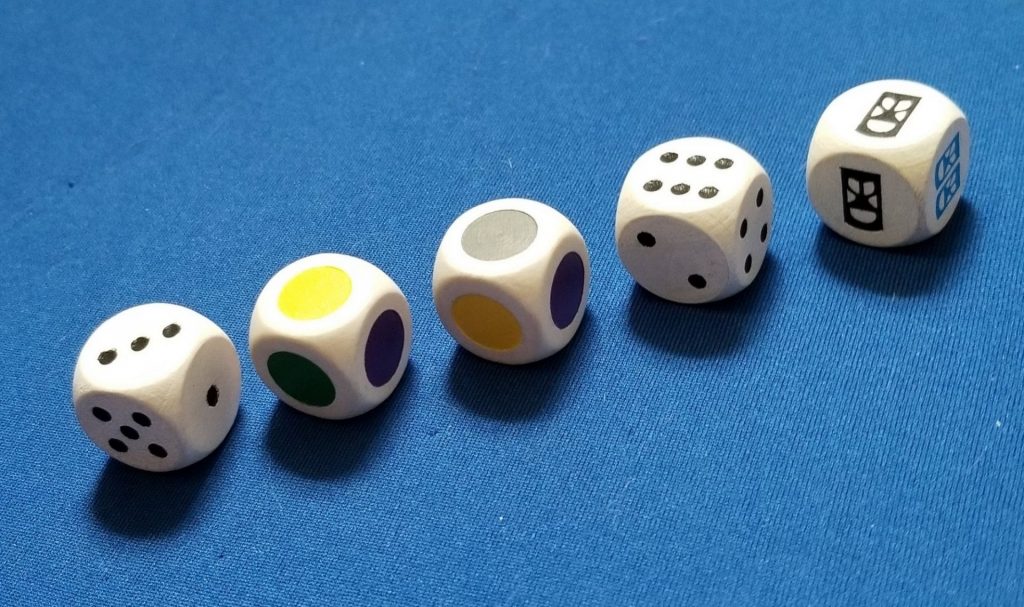 Then each player will select 1 color and number combination to use. The number is written into a hex corresponding to the selected color die, but it must touch a hex that has already been used. This means that the very first turn of the game would be spent filling in a hex next to the player’s chosen start castle. If the player is unable to use the dice for whatever reason they will circle an orange worker. The rule book never explicitly says that you can’t just opt to not use the dice and take a worker instead, but it also doesn’t say that you can. So, just use your own best judgment here.

Before or after filling in your chosen location, you have the option to use one of your collected bonuses. After you have completed taking your turn the dice are rolled again to begin a new round.

Filling in the spaces may trigger the acquisition of bonuses. It goes without saying that every time you fill in the last space of a same-color area, you score points based on the size and the current phase. For example, a size 4 city completed in Phase 1 would score 13 points but it would only score 10 points in Phase 2.

Here are the colors along with their game names, the number requirements, and their bonuses (if applicable):

Cities (orange) – all different numbers: In addition to the size scoring, you also receive a free worker. Workers are used to ignore the pip value on the number die and treat it as whichever number you wish.

Monastery (purple) – 1s and 2s only: In addition to the size scoring, completing the color area rewards you with a monk which can be used to ignore the colors on the color dice to use any color of your choice.

Mines (grey) and Rivers (blue) – 3s and 4s only in the case of the mines; 5s and 6s for the rivers: In addition to the size scoring, completing the color area rewards you with silver (mines) or commodities (river). Using silver allows you to use a second, but different, number and color dice combination during the same turn. Commodities can be sold off whenever the blue double hourglass is rolled in order to earn a silver and 2 victory points.

Castles (dark green) – any number marked in a surrounding hex: In addition to the size scoring, completing the color area will reward you with your choice of a monk, a silver, a commodity, or a worker.

Pastures (yellow/light green) – all same numbers in an area: In addition to the size scoring, completing the color area will allow the player to score for the size and phase combination for this pasture a second time thereby doubling the pasture’s value.

You are relegated to only using a single bonus per round, so choose wisely.

The true test of any effort to convert a board game into another format is trying to not only create a new game experience, but to also maintain the overall feel of the game in question. Some, like Agricola: All Creatures Big and Small knock it out of the park. Others, like Imperial Settlers: Roll & Write, don’t do as good a job and almost miss the mark entirely. I think that CoB Dice is a success in this regard. That sense of having to make tough choices about whatever fate has dealt to you, the feel of watching your duchy grow, and the quest for victory points are some of the things that make CoB sing. And those aspects are prevalent here as well.

In CoB, you’re given 2 numbered dice each round and a plethora of options as to how to use them. The open endedness of those decisions can sometimes mean that turns can become very lengthy as you attempt to math out the end result of every decision tree before finally settling on a move to make. CoB Dice effectively limits you to a possible 5 decisions: take a worker, use number die 1 with color die 1 or 2, or use number die 2 with color die 1 or 2. But this limitation in no way shrinks the decision making space. This is because of the bonuses. These bonuses not only provide you with the dice manipulation that you need, but they also serve as conduits to expand your duchy at a much accelerated rate.

The way the bonuses work in CoB Dice is the only aspect where I feel an opportunity was missed. Since you’re only allowed to use 1 bonus per round, there’s no way to chain these bonuses together. That’s one of the aspects of the Roll and Write genre that makes them so popular. Creating a cascade of activity from using just a single die rewards the player with a surge of adrenaline. It’s exciting and it makes you feel like a badass. It’s a shame this kind of thing wasn’t incorporated into CoB Dice better.

So, if you think of CoB Dice as purely a CoB port, it’s a raging success. But if you approach it purely as another Roll and Write, there are better ones out there. Is CoB Dice Stefan Feld’s finest game? Probably not. But it is a fun one and sometimes that’s what really matters.

The Castles of Burgundy: The Dice Game details 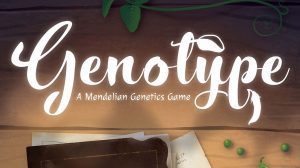 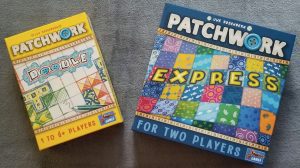 There are lots of different flavors of Patchwork, but did you know that it had inspired 2 distinct spin-offs? Read our review of Patchwork Doodle and Patchwork... 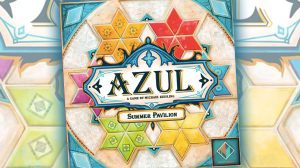 How does Azul: Summer Pavilion stack up against its namesake? Read our review to find out! 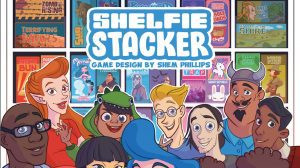