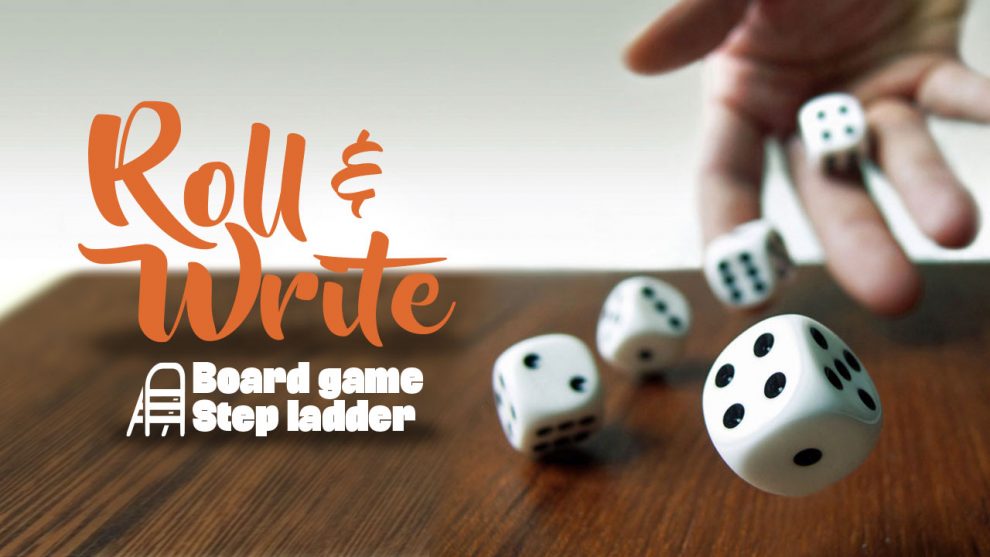 David McMillan @FeldFreak
Add Comment
In today's step ladder, we explore a type of game which is rapidly gaining in popularity - Roll and Write. How do you elevate such a simple concept? Read on to find out!

In today’s Board Game Step Ladder article, we’re going to be talking about Roll and Write games. The concept is basic; roll some dice, write some numbers, and do something with the results. So, let’s explore this mechanic and elevate it.

Yahtzee has been around for quite some time. Originally filed as a trademark by Edwin S. Lowe in 1956, its roots go back much further. A very similar game called “Yacht” which dates back to at least 1938 is nearly identical in both structure and game play and THAT game was inspired by other game predecessors as well. There exists a patent for a game from as far back as 1881 called “Poker Dice” which is similar in nature. 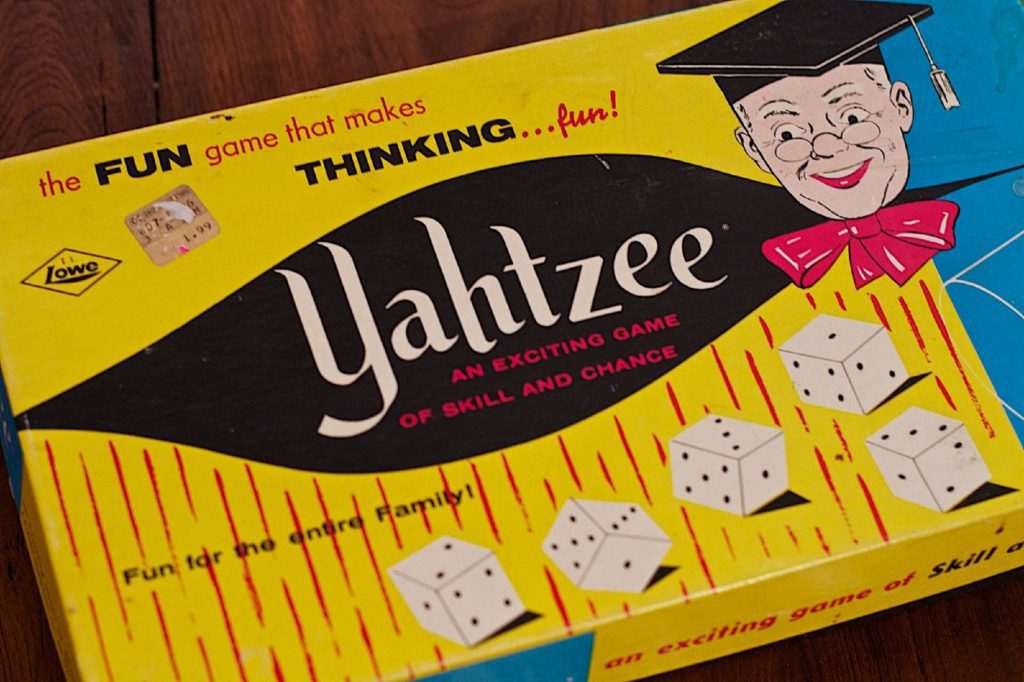 The rules for Yahtzee are pretty simple. Five dice are rolled in a cup and cast onto the table. The player that rolled them can then set some of them aside and re-roll the others if they wish. They are allowed a total of three rolls per turn. At the end of that turn, regardless of the outcome, they are forced to choose how they are going to spend their dice.

Each player has a score sheet which is broken down into different segments: single digits like 1’s, 2’s, 3’s, etc. and set collections such as full house (2 of a kind plus 3 of a kind), 3 of a kind, 4 of a kind, etc. A 5 of a kind is called a Yahtzee. Each of these sections may only be scored once per game and if a player has rolled dice that cannot be scored legally, the player must write in a 0 in one of the unused scoring areas of their choice. Once every player has filled in their score sheets the results are tallied and the player with the highest score wins. 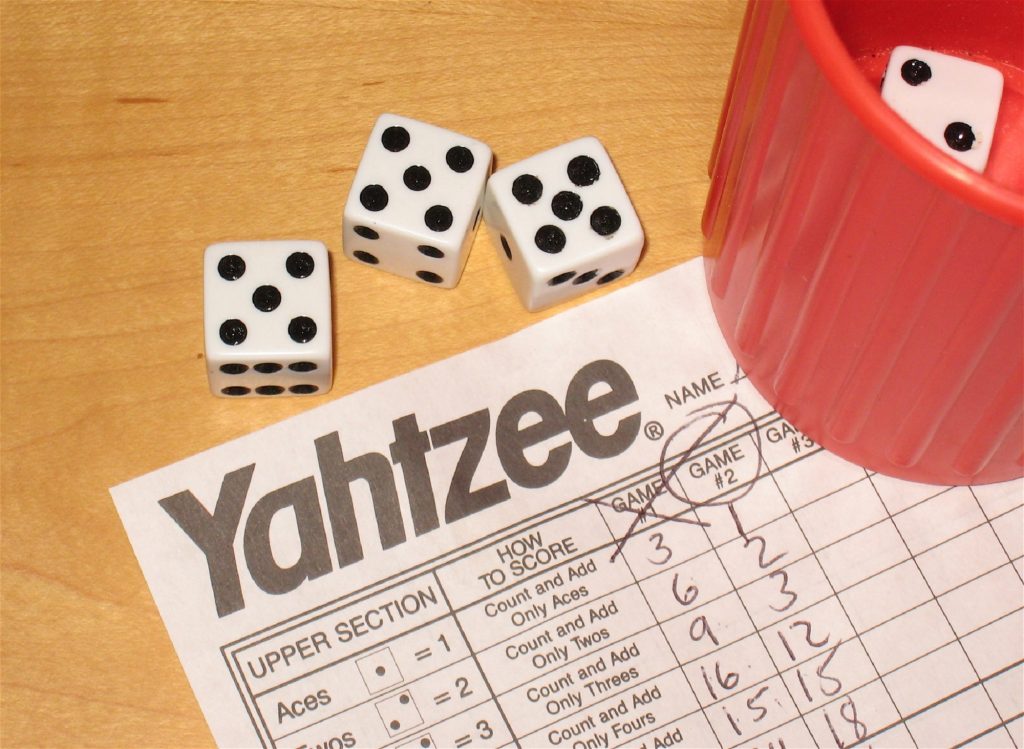 Yahtzee presents the players with a few interesting dilemmas such as what to do with lousy rolls, when to stop pressing your luck, when to go on pressing your luck, and what to do when you can’t legally score with whatever was just rolled. Because of its small size and easy to learn rules, Yahtzee has become a classic. But, it has not weathered gracefully. Yahtzee is very solitary in nature. There’s really nothing that you can do to influence other players. It’s also almost entirely reliant on luck with very little skill involved. As such, it’s a game that has fallen out of favor with today’s modern board gamer. Fortunately, the roll and write mechanism hasn’t stagnated; in fact, it’s very much alive and kicking. The next game on our list uses similar mechanics to Yahtzee but adds in some strategic decision making as well as some very important ways to affect poor dice rolls.

Designed by the husband and wife duo Inka and Markus Brand, Saint Malo incorporates the roll and write mechanism into a game that has a distinctly euro feel. The game comes with five dice that have six different symbols on them, a central board, and five player boards. The game also comes with five dry erase markers because not only will you be using your player boards to track your score, you will be writing on them as well! The small component set is deceptive in its simplicity because this game definitely has some teeth. 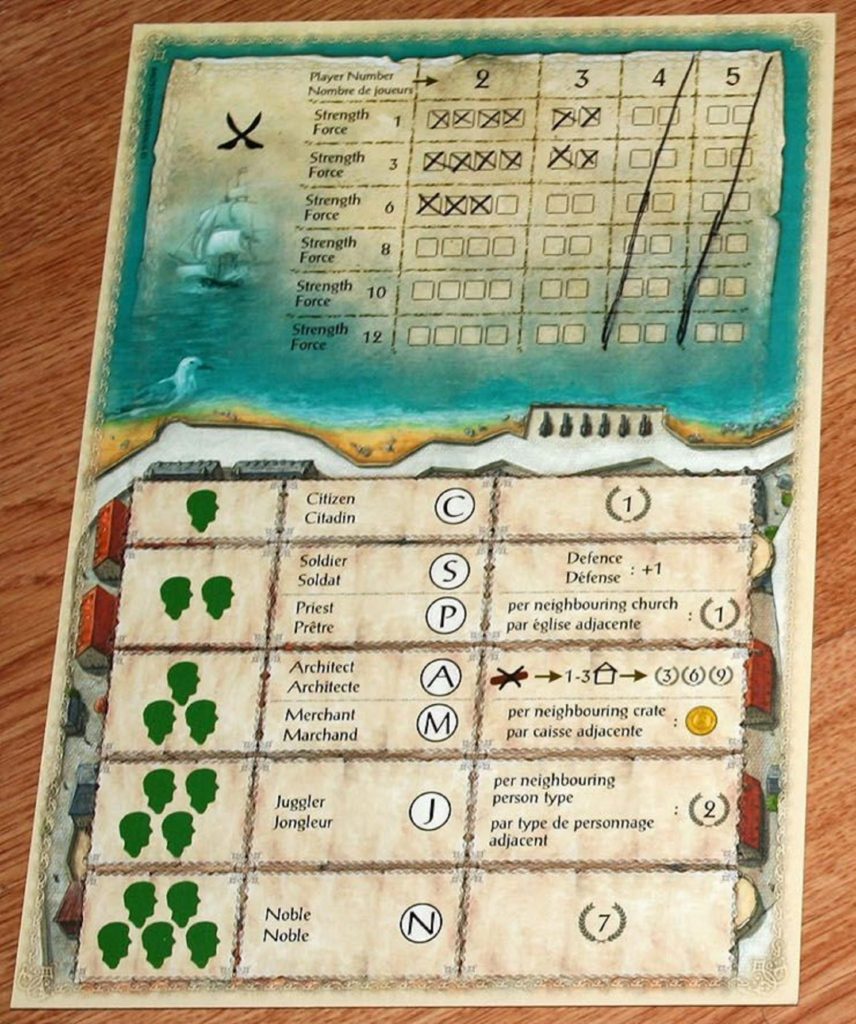 Each player board is divided into 45 squares – a dark grey border made up of 20 spaces and a five by five grid on the interior. On their turn, players will have the opportunity to roll all five of the dice a total of three times. At the end of each of the first two rolls, the player can set aside any of the dice that they wish. They can even re-roll dice that were previously set aside. At the end of  the third roll, though, they’re stuck with whatever they’ve got. The player will select a single symbol to work with and then add the results of all matching dice to their player board. And while it may seem like you’re entirely at the mercy of the dice, Saint Malo allows you to affect the results by spending money to adjust the die faces to suit your needs.

Each of the die symbols serves a specific function to help the players acquire resources, money, and victory points. For instance, the log icon earns you wood which the architect (gained using the faces icon) will use to construct buildings that will earn you victory points. If there are any crossed swords symbols, then one box is filled on the center board per crossed sword symbol. After a certain number of these are filled in, the pirates will attack all of the players simultaneously. Each time the pirates attack, they attack with a greater strength than before and if a player is unable to come up with enough defense to fend them off, it will cost them points at the end of the game. Used cleverly, this can actually be used as an offensive measure to cost your opponents points! When the end game arrives, the victory points are tallied to determine the winner.

The concept of rolling dice and writing things down will feel familiar to anybody who has ever played Yahtzee, but having to make careful decisions such as where to place the items that you construct or when to cash in your coins presents a whole new challenge. Coupled with having to make ready for the ensuing pirate attack, this makes for an interesting game that is easy to teach, easy to play, but will test you at every turn. A lesser part luck and a greater part strategy, Saint Malo is an excellent step up our ladder. The next game on our list will really test your mettle and pushes the roll and write mechanic to its limits.

Ganz schön clever, designed by Wolfgang Warsch, is a roll and write game that is anything but simple. Players must constantly consider how each move will interact with the others and the game presents a lot of interesting and tough decisions along the way.

A turn begins when one players rolls all  6 of the differently colored dice. After rolling the dice, the active player selects a die to keep. Then every die having a lower value than the selected die is set aside onto a silver platter printed on the inside of the box. The chosen die is placed onto that player’s score sheet and a corresponding action is performed based on the selected die. The player repeats this process two more times.

After the active player has performed the actions with the 3 dice they have selected, the passive players get to perform an action using one of the leftover dice on the silver platter. Then the next player takes their turn and play continues for a number of rounds, based on player count. Then all of the scores are tallied and the player with the highest total wins.

That might sound very simplistic, but that’s because it is a very high level overview of the game. Each player’s score sheet is divided into five colored sections which correspond to the dice colors, and each of these sections is scored in a different way.

The yellow section is essentially a giant bingo game where completed columns result in end game victory points (VP) while completed rows provide special bonuses. The blue section rewards you for marking off numbers. Each row or column of marked off numbers results in a bonus of some sort and you will earn more end game VP the more numbers you are able to mark off.

The green section requires that the number used to mark off a space be greater than or equal to the number printed on the space. Along the way, bonuses will be unlocked. The orange section will accommodate any number at all without any restrictions and will occasionally provide bonuses and multipliers to help increase your overall score. The purple section requires that each successive number be greater than the previous one (starting over after a 6 has been written in). This section, too, provides different bonuses.

The bonuses come in the form of free dice re-rolls, the ability to utilize some dice multiple times, the ability to mark off different colored sections for free, the ability to write in free numbers in certain areas, and also the fox bonus which multiplies your lowest score for a single section at the end of the game times the total number of foxes that you have selected.

The game can be a little confusing at first, but it doesn’t take very long to grasp the essential ruleset once you’ve begun playing. But don’t be fooled by that statement. There’s a lot of hidden depth and strategy in Ganz schön clever. Figuring out how to chain bonuses together to fill up large swaths of your score sheet in one fell swoop, determining which dice to keep and which to give away, and assessing the perfect opportunities to use your bonuses is no easy feat. But when you do manage to time everything just right, it can be very satisfying. If you’d like to learn more about this ridiculously addictive game, then check out Andy Matthews‘s review of Ganz schön clever.

There are a number of other Roll & Write games you might want to check out next: Qwixx, Balloon Pop, Steamrollers, Qwinto, Octodice, and Noch Mal to name a few. You can even read our review of Rolling America.

The roll and write mechanism has definitely come a long way since the days when Yahtzee was king. Regardless of your skill level, there is a roll and write for you. We hope you enjoy your journey up the step ladder!

If you enjoyed this article, why not read the rest of our Board Game Step Ladder articles. 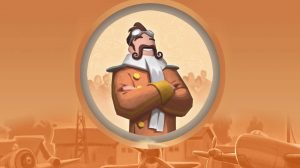 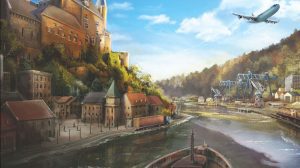 In a dark and distant future, a super intelligent computer called Mother rules the world. In an effort to understand its own weaknesses and foibles, humankind...