In 1278 the abbot of a monastery in Sedlec, in what is now the Czech Republic, traveled to The Holy Land. He returned with a small amount of dirt from Golgotha, the spot where Jesus of Nazareth was crucified, and sprinkled this dirt around the abbey cemetery. As word spread about the abbot’s pious act the cemetery became a desirable burial ground, and soon tens of thousands of people were laid to rest on the premises, actually requiring the graveyard to be enlarged. Hundreds of years later a new chapel was built on the grounds and the unearthed remains were stored in an ossuary. At the end of the 19th century a woodcarver named František Rint was hired to make some sense of the heaps of ancient bones, resulting in what is now known as the Sedlec Ossuary. 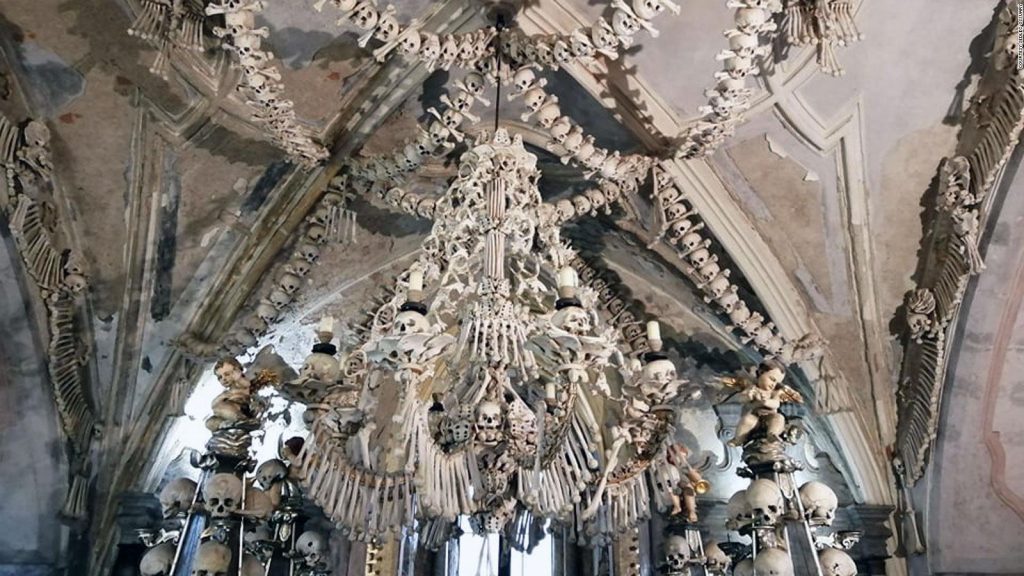 I know what you’re thinking: perfect premise for a light card game, right?

Skulls of Sedlec is an 18 card mini game from the wizards at Button Shy Games and like many of their titles there’s more to this one than meets the eye sockets. 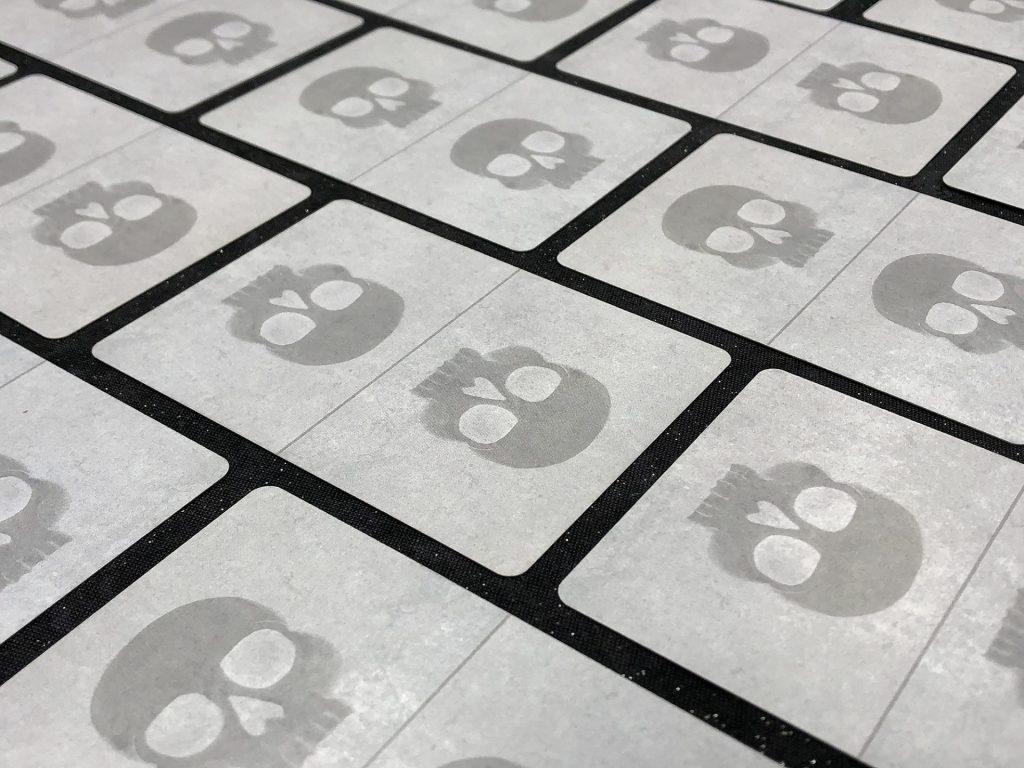 In Skulls of Sedlec, 2-3 players act as František Rint and take turns drawing and placing cards into their own personal pyramid. Each card displays 2 skulls from five different types (criminals, peasants, romantics, priests, and royals). At the end of the game players will score points based on the arrangement of these skulls in relation to each other. 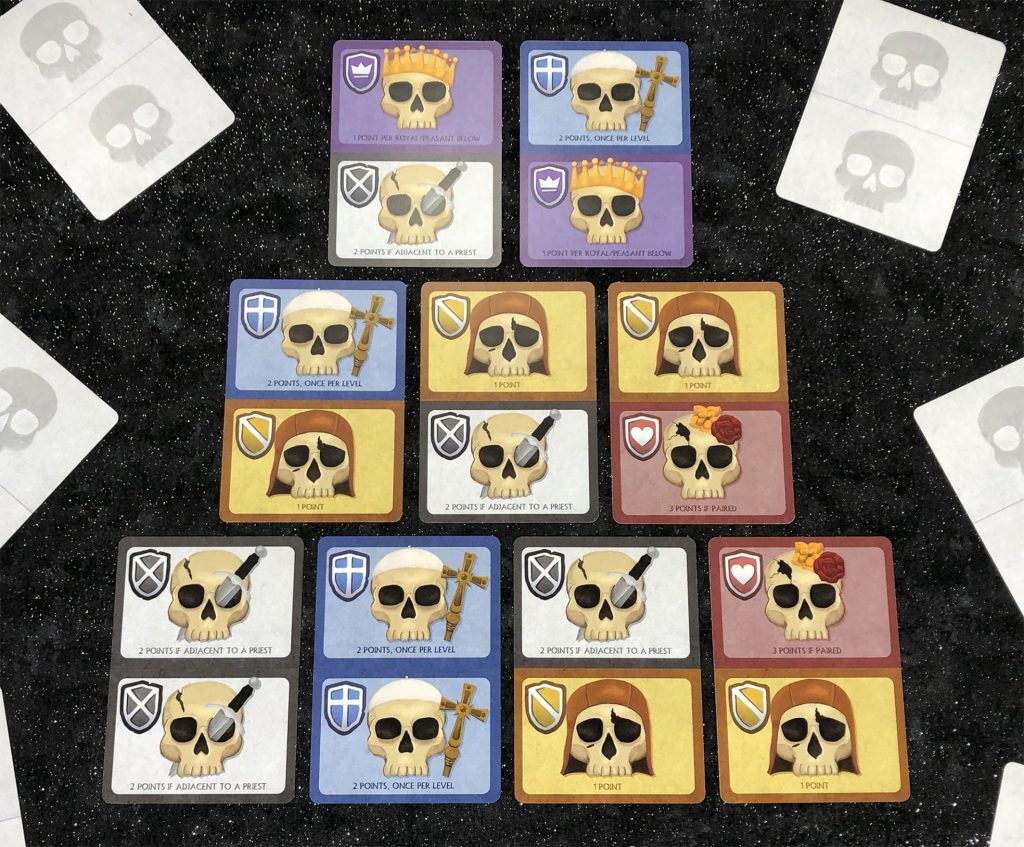 In this pyramid from a 2 player game, this player would have gotten 40 points:
5 for peasants, 10 for criminals, 8 for priests, 6 for romantics, and 11 for royals.

On a player’s turn they can select one of three actions:

Note that players have a hand limit of just two cards. 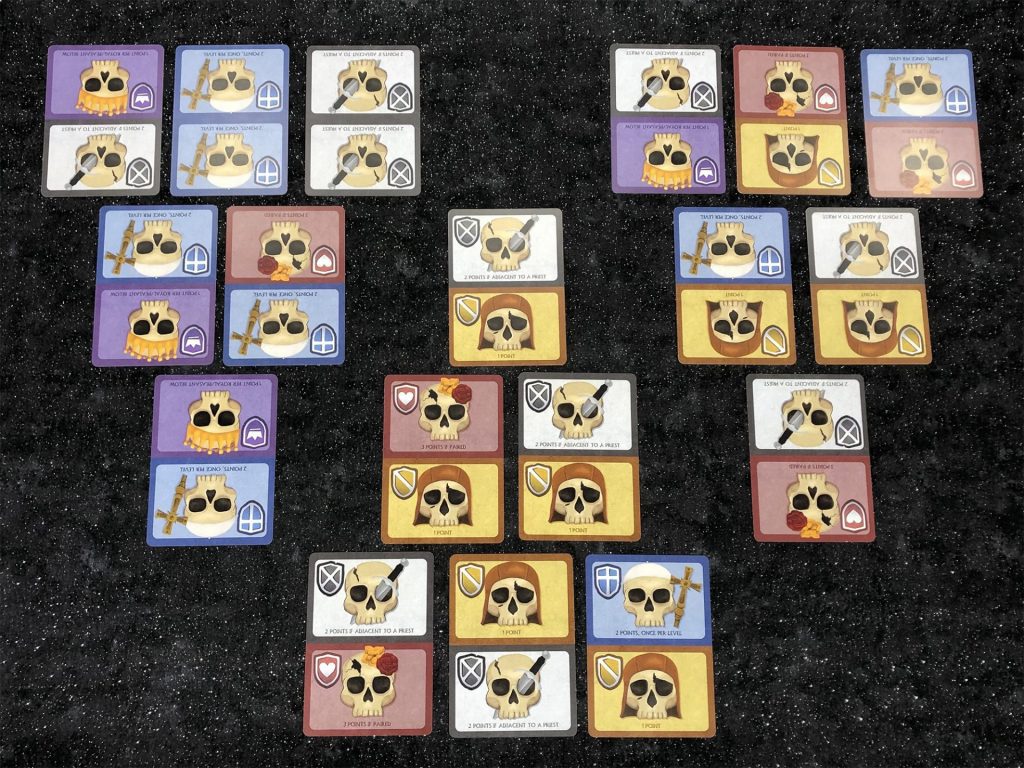 This is what a 3 player game of Skulls of Sedlec would look like, each player has 6 cards in their pyramid.

The player with the most points at the end of the game is the winner.

Near the end of 2019 Button Shy Games launched an 18 Card Challenge series. The goal was to showcase all the things that could be done with a mere 18 standard-sized playing cards. In case you weren’t aware, that’s Button Shy’s thing: all of their games are 18 cards. That may not seem like a lot of design space, but when they threw open the gates there was a flood of submissions –  hundreds over the course of the challenges!

Skulls of Sedlec was the winner of the “Design a game around a real life location” challenge in November, and this one’s an excellent example of clever game design and tough choices. Plus it’s live on Kickstarter as you read this review.

Skulls of Sedlec is an exercise in simplicity. Just three actions and 5 different skull types means that the focus is on the arrangement of your pyramid. You want to pick up the cards you need, but do your best not to have two cards in hand if you can help it. Getting stuck with two cards means you won’t have the option to pick up that second Romantic when your opponent turns it over. You’ll be forced to play one of the cards from your hand first, and that’s no good because it means they’ve got leverage; they can potentially pick up two cards in a row.

The artwork in Skulls of Sedlec may not win any awards, but it’s very well drawn, with clear symbolism and a rich color scheme. No one’s going to confuse any of the skulls for another and that’s good because you’ll often be looking across the table to see just what your opponents have in front of them.

People with good memories might have a slight advantage in this game because all card draws are public. But even that won’t help you if your opponent simply turns and takes the card you were looking for.

If you’re already a fan of Button Shy Games’ work then I don’t need to convince you how good 18 card games can be. In fact their smash hit Circle the Wagons is still one of my favorite games of 2017. Skulls of Sedlec doesn’t have quite the same complexity as Circle the Wagons, but it’s still a solid game, and one that’s worth your consideration!