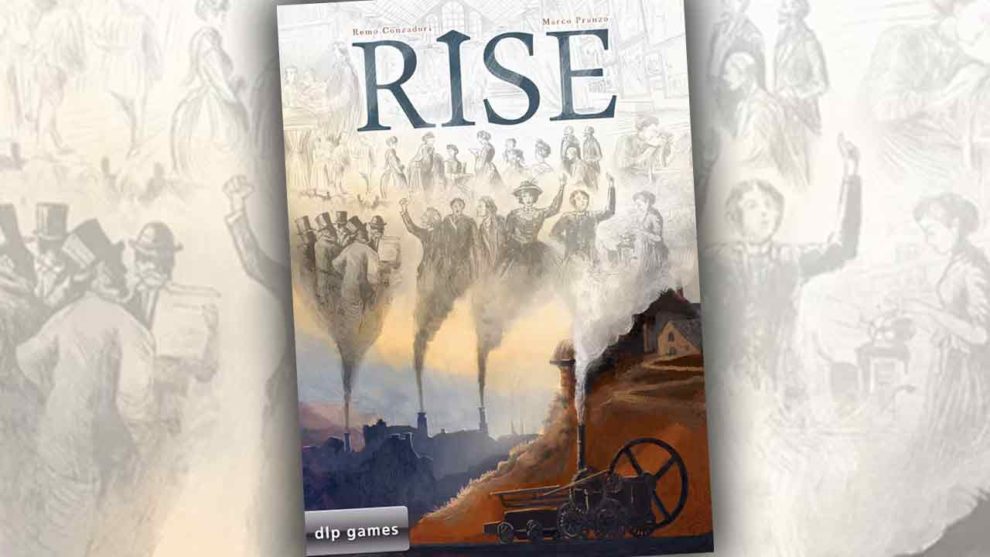 I’ve been talking tracks all year.

Tracks, tracks, tracks. Those other games had tracks as a part of the game’s mechanics, but it was only a matter of time before an entire board game was built around tracks. And I’m not talking about the games that were roll-and-writes (RNWs) such as Ganz Schön Clever, where the loop is always the same: roll dice, get stuff, mark it on a track, get more stuff on a different track.

No, I mean a board game, with a board, no dice, no pencils, no pad of paper. For the gamer looking for a RNW game in tabletop form, complete with a board to track those tracks and a larger table presence, I have good news. Capstone Games has published Rise, this year’s most track-driven board game.

I’m just not sure you’ll come back to Rise after trying it. 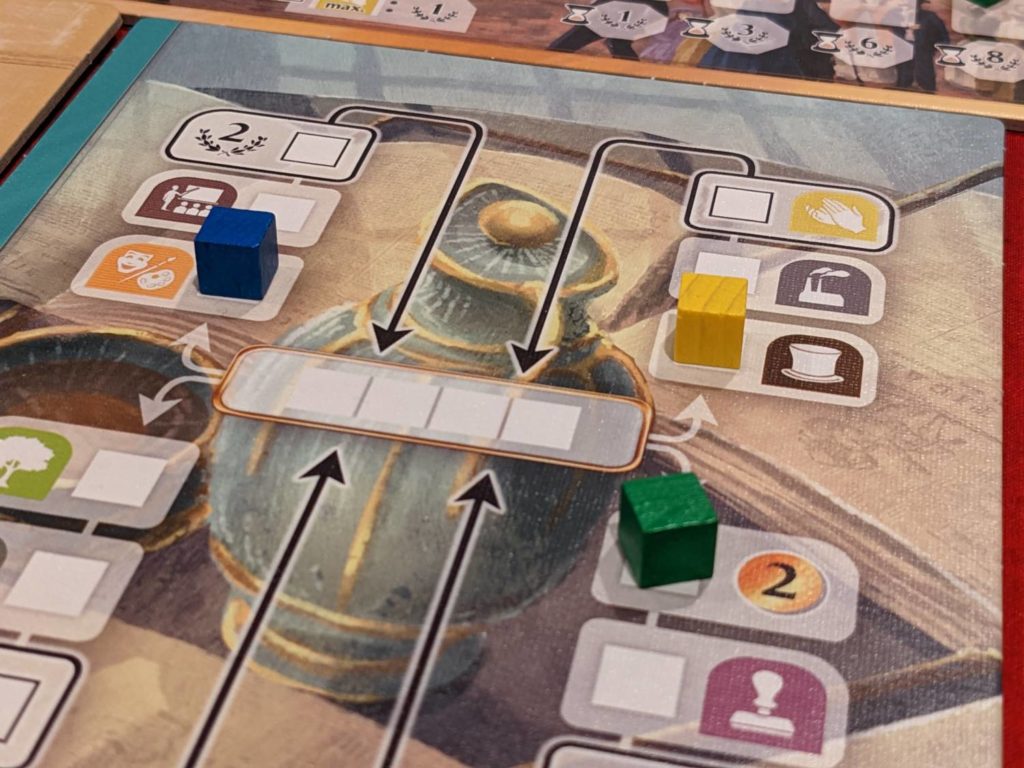 You’ll be forgiven for believing that Rise is a game about the rise of women’s rights in the mid-to-late 1800s, based solely on the cover art in the header image above.

No, friends: this is a game about tracks.

It is so track-driven that the game doesn’t even disguise its intent. Your job as a player is to nurture the well-being of the citizens of an unnamed city by building social and economic development across a range of industries—something you’ll do by moving markers up tracks.

How many tracks? This game is so track-heavy that the ten track boards are DOUBLE SIDED, with an A and B side, meaning you’ve got 20 available tracks.

All these tracks make more sense if we think about them in terms of the game setup and player turns, so let’s start there.

A market board of four action cards is interspersed with three event cards. Over 12 rounds, players will pay coins to place their factory (action) marker under an action card of their choice.

When taking actions, players look for the track board listed on their selected action card, then move up a number of spaces on that track. Like all good track games, that might mean you’ll move up on one track to trigger a move on a different track, which cascades into a few satisfying turns in each game. Go up on the Bank track (yes, it’s called the Bank track and not, say, the Economy track), and you might go down on the Satisfaction/Riot track, but you could instead choose to go up on the School track to get a bonus that triggers a move up on the Politics track to then go up once on the Culture track to get four points.

There’s even a victory point tracker that tracks all players’ current score. So, I lied; there are 11 track boards, not 10. (To the credit of the game, there are no player boards, so all the tracks are tracking things publicly.) 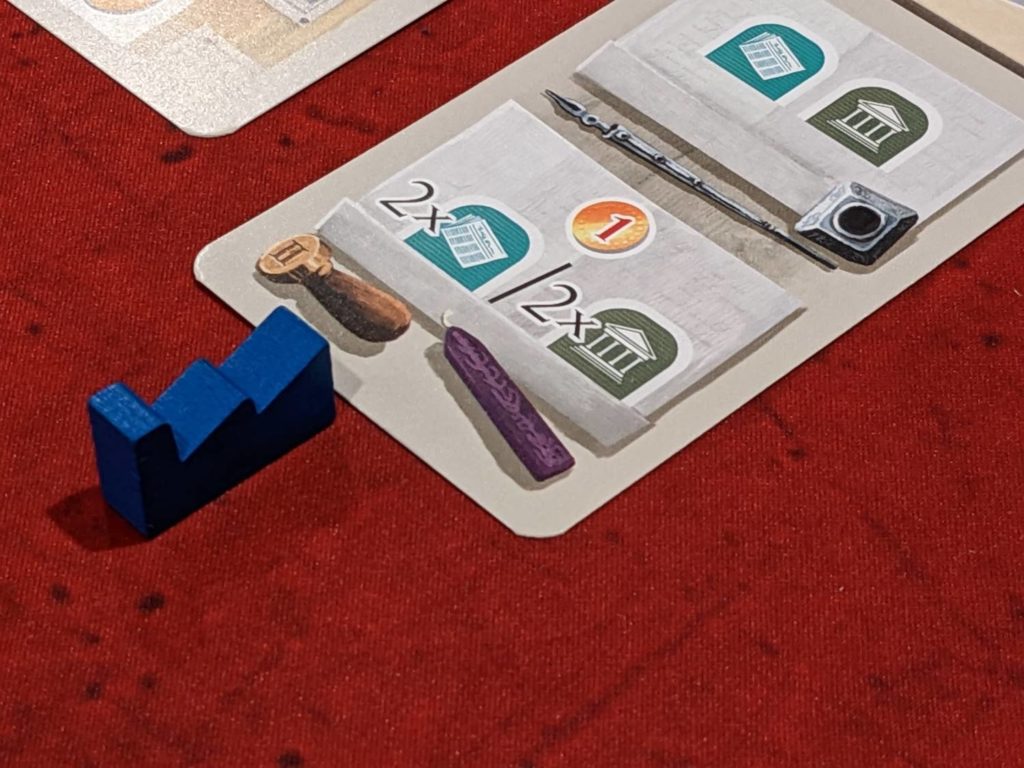 Here’s the thing about Rise. I think the game is only OK. But that’s because I think games solely focused on tracks are also only OK.

But if you love tracks, I think you will love Rise. It’s themeless. It’s quick, although not as quick as games such as Ganz Schon Clever because RNWs like that are just tidier and have a smaller footprint. If you like board games and tracks and always wanted a larger version of classic RNWs, Rise has you covered.

However, even if you love tracks, there are a couple of things to point out here. The variety in plays isn’t that robust. You are likely going to figure out what my gaming group did on its very first play of the game: you need to max out your position on the Culture, Science and Politics tracks, because those bonuses at the end of the game will always make the difference.

Because the action cards get better in the second and third Ages of the game (so, rounds 5-12), you can make big jumps on all tracks as the game plows along. An experienced player in Rise can safely get away with penalties on the Satisfaction/Riot track early, because making that up to score 12+ points at the end of play is easy with so many ways to boost the Satisfaction side of that track.

The variety of action cards isn’t great—go up once on this track for free, or twice if you pay a couple of coins. The way event cards shake out, all players seem to do the same thing: placing their marker on an action card farther to the right in the display gets to trigger all of the event cards to the left of their placement. (The instruction manual also reminds you that this is extremely beneficial.)

In my plays, players always tried to use the third or fourth action card because most event cards result in positive track movement. That will cost you two or three coins at the start of play, but (naturally) one of the tracks brings that cost down to as low as zero coins.

Across my three plays of Rise (two at three players, one at four players), players had lukewarm feelings to share after games were completed. I feel the same way; everything’s fine here, and my favorite part of Rise was deciding which of the four action cards to select. After that, it was just accounting, and watching other players move up on tracks is a bit dry 90% of the time.

Rise did not rise to the occasion, at least for me. 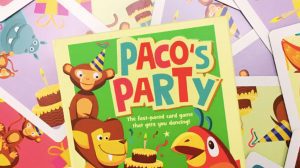 Justin reviews the Blue Orange game Paco’s Party; join him as he dances all the way there! 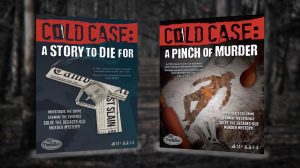 Cold Case: A Story to Die For and A Pinch of Murder Game Review

Justin reviews ThinkFun’s first two games in their new “Cold Case” series, A Story to Die For and A Pinch of Murder! 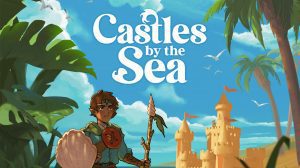 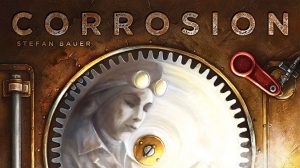