In the game of Nerdy Inventions, players will be rolling dice to collect cards from an open tableau. The acquired cards are then added to their play area (Laboratories) and can then be used for their special abilities. These cards allow players to manipulate their dice rolls on future turns in order to acquire more Invention cards. This continues until certain end conditions are met at which point the players tally up their points to determine the winner.

Opening the box, you will find an 8 page rulebook, four standard six-sided dice, and a deck of cards. The cards are subdivided into different types: Invention cards, Starting Invention cards, Tool cards, Card Abilities Reference cards, and Dice Value cards. The cards are nice and sturdy and have a smooth linen finish. The rule book is well-written and nicely illustrated. It is worth noting here that not only did Chih-Fan Chen design the game, but he also did the illustrations for it as well. Overall, the look and feel of the game is very aesthetically pleasing and it definitely has a nice table presence. 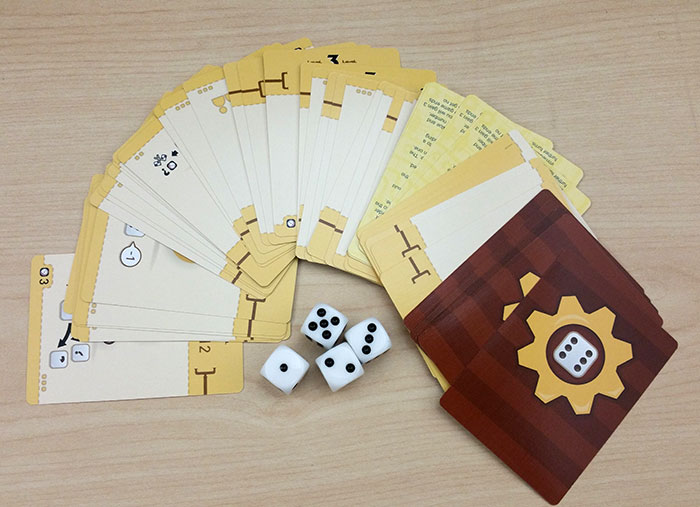 Next, a starting player is chosen and each player receives the Starting Invention card with their player number on it (in a clockwise direction). This is kept in their Laboratory. Each player beyond the first also receives a Tool card which is kept in the Laboratory. The dice are placed closeby and you’re ready to begin. 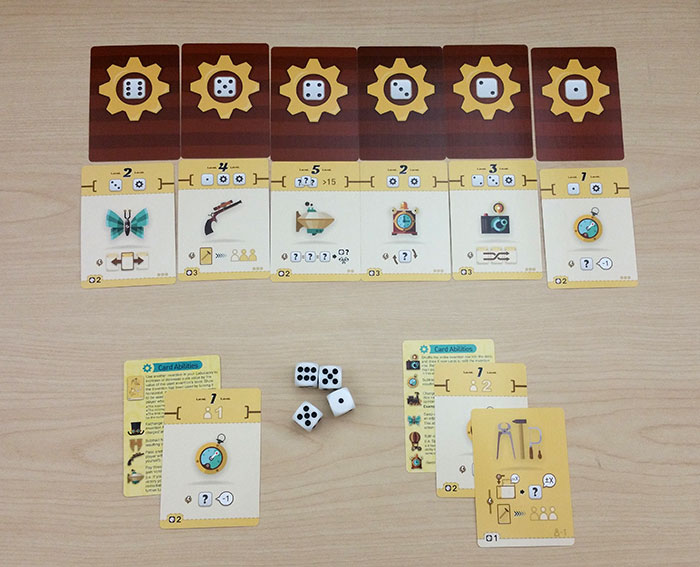 The Dice Value cards and Reference cards are pretty self-explanatory, but it is helpful to take a moment to discuss the layout and abilities of the various Invention and Tool cards. Each Invention card follows a standard layout. At the top of the card is a number that signifies the card’s level. Beneath this is the card’s dice requirement. At the bottom middle of the card is an iconic description of the card’s ability. The lower left hand corner contains the card’s victory point value and the lower right hand corner shows how many copies of the specific card are in the deck. The Tool cards are pretty much the same except they do not have a card level value associated with them. 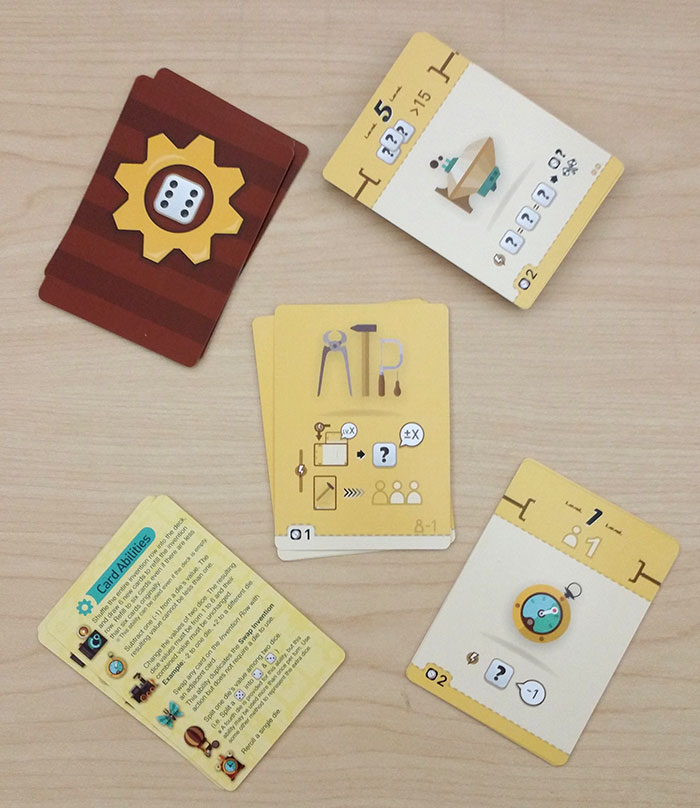 Some of the card abilities allow you to manipulate the dice in some way such as adding or subtracting pips from the dice, rerolling the dice, or splitting values between dice. Others allow you to alter the layout of the Invention Row. The Tool cards allow players to alter the dice rolls drastically, increasing or decreasing a die’s value by the level of the invention that is assigned to the Tool card’s ability. For instance, if a player uses the Tool card in conjunction with an Invention card that has a level of two, then they could add or subtract two from the face value of any of the dice they had rolled that turn. But if they use a Tool card, they’ve got to relinquish their Tool card to the player that doesn’t have one. 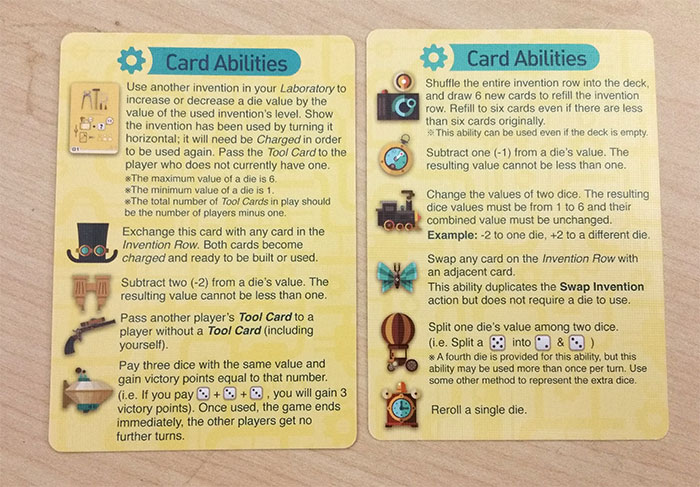 A player begins their turn by rolling three dice. This is followed by taking as many of the following actions as they want and in any order that they choose:

Build an invention – a player pays the card’s dice requirement and places the card into their Laboratory. If there is a gear icon in the dice requirement, then the value of the gear icon is the same as the value on the Dice Value card that the Invention card in question has been placed beneath. A die value of six is wild and can be used as any value.

Use an invention – a player may utilize a previously acquired Invention card’s special ability. When a card is used in this way, it is exhausted and turned sideways to signify that it has been used.

Charge an invention – the only way to re-use an exhausted card’s ability is to recharge the card. This is done by paying the card’s level with one of your dice. The recharged card is turned vertical and is immediately available to be used again. 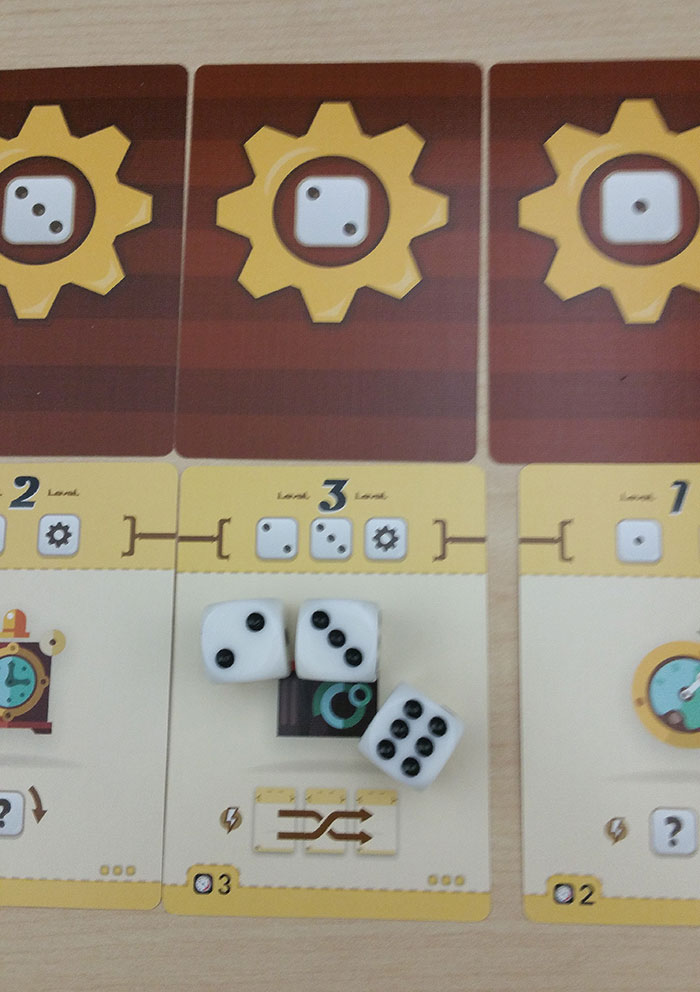 Once a die has been used for anything at all, it should be set aside. The used die cannot be used again during this turn. Once the active player is finished taking their turn, the Invention Row is refilled. All existing cards in the row slide to the right to fill in any empty spaces. Then new cards are drawn from the Invention card deck and placed beneath the now empty Dice Value cards.

The game can end in one of two ways. Firstly, the game will end immediately as soon as a player uses the submarine ability of one of the Invention cards that can perform the action. The actions in this game do not have any actual terminology. It’s all iconography and this particular action looks like a submarine to me. I’ll include a picture of it here so that you can decide for yourself. 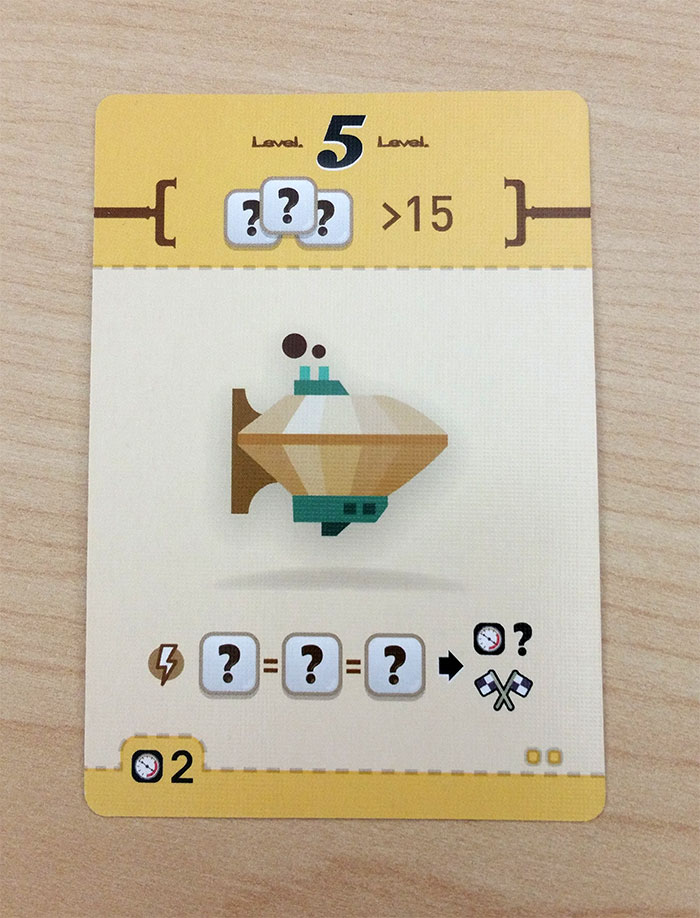 The second thing that can happen to bring the game to a close is if the last card from the Invention card deck is dealt to the Invention Row. In this case, the players will continue taking turns until it is the starting player’s turn again. Then the points are tallied up.

Players will receive victory points from each of the Invention cards and Tool cards in their laboratories. Additionally, they can earn bonus points if they have built a large collection of different invention types. The amount of points earned depends on the size of the collection. The player with the most points wins the game.

My first impression of the game was formed as soon as I opened the box. The minimalistic nature of the artwork, the small number of components, and the presence of dice gave me the impression that the game was going to be very simplistic and very reliant on luck. Reading the rules and realizing that the game provides the players with a method for manipulating the dice provided me with some hope, though. Maybe there might be more to this game than it would appear at a glance. Maybe the dice manipulation would provide an element of strategy that might not be readily apparent. But would it be enough? There was only one way to find out. I rounded up a few friends and sat down to play.

As I suspected, the dice element does introduce a hefty amount of randomness into the game. In fact, so much so that there are some turns where the person rolling the dice literally cannot do anything of any great benefit to them. There’s always the option to swap two cards around, but when swapping those cards still leaves you in a situation where you’re unable to obtain any of them, what’s the point?

However, that being said, when you ARE able to acquire new Invention cards to add to your laboratory, things start to get interesting. It’s slow going at first because there are fewer cards for you to exhaust, but as your stockpile of inventions grow so, too, do your options. Whereas you might start the game with a Starting Invention card that allows you to subtract 1 from the face of a single die, later turns will see you manipulating the dice in much more clever ways. 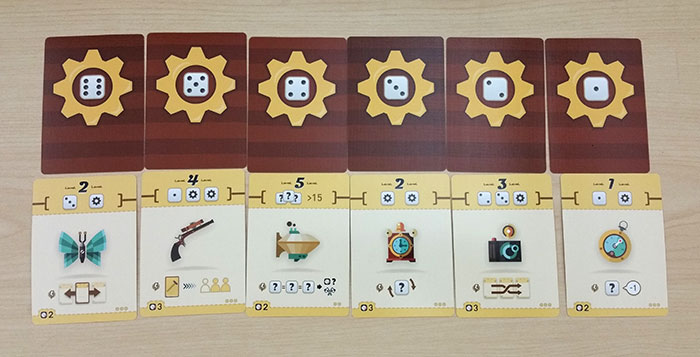 For instance, in one game that I played, the end game card turned up in the Invention Row and I wanted it badly. Normally, in order to acquire the card you’d have to roll a total of greater than 15 across all three of your dice. I did not roll this high, but I did have an Invention that I’d constructed that allowed me to swap it with any card in the Invention Row. So, I swapped the two cards and gained possession of the end game card.

As I mentioned earlier, the end game card has an ability that looks like a submarine. In order to use this ability, it requires the active player to use three dice of the SAME face value. When the ability is used, the player that used the ability would earn bonus points equal to the value of the three dice. I had rolled up a four and 2 threes. I knew that I could use my Starting Invention card to turn the four into a three, but that would only gain me 3 bonus points. Instead, I used the various cards that were available to me to flip dice, swap Tool cards around, and reroll to transform all three dice into sixes and finished out the game much more strongly than I otherwise would have. When it was all said and done, I’d managed to exhaust seven different Invention cards in a single turn and it was glorious.

It’s this kind of card comboing that makes the game enjoyable. This tiny bit of control over the outcome of the dice rolls is just enough to make it feel like you’ve got some influence over your fate. It’s not all sunshine and roses, though. There’s definitely an issue with pacing. It starts off a little slow and plods along for a bit, but it eventually picks up mid-game and begins to move much more quickly. Part of the slow start is due to only having a single Invention card at the start of the game. Part of it, though, is due to decision making and calculating. That was certainly not something I was expecting, but I was pleasantly surprised to see it happening.

Overall, Nerdy Inventions is a pretty solid little game. It’s certainly not going to be the deepest, mind bending game you’ll ever play, but there’s enough thinkiness there to keep you invested. Couple that with the simple rules and the very quick playtime and you’ve got yourself a pretty good filler. While it’s not a game I am head over in heels in love with, I like it well enough that I’d probably play it if someone asked me to. 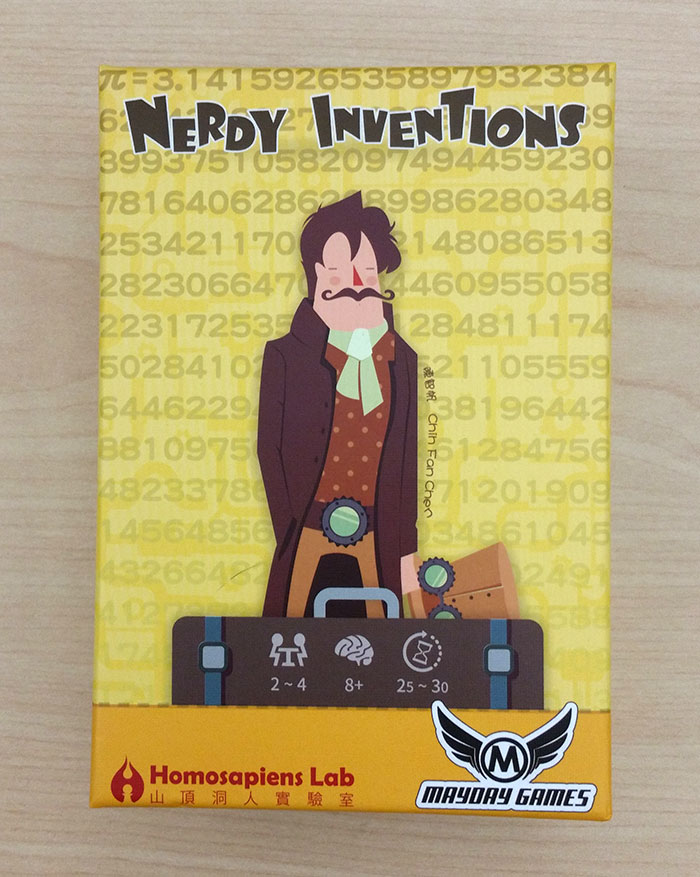 What do you think about Nerdy Inventions? Give us your opinions about what you like and/or dislike about the game in the comments below!