Mythic Battles: Pantheon Review – Decide the Destiny of the Gods

Greek mythology is the only thing I remember from my time in high school.  Forget about pre-calc, or what time Napoleon went somewhere; gods were all that I cared about.  The stories, the legends, I knew all of them, and I’m sure almost anyone else who went to high school didn’t graduate without a good sum of mythological knowledge. The stuff was awesome.

And then this came along… 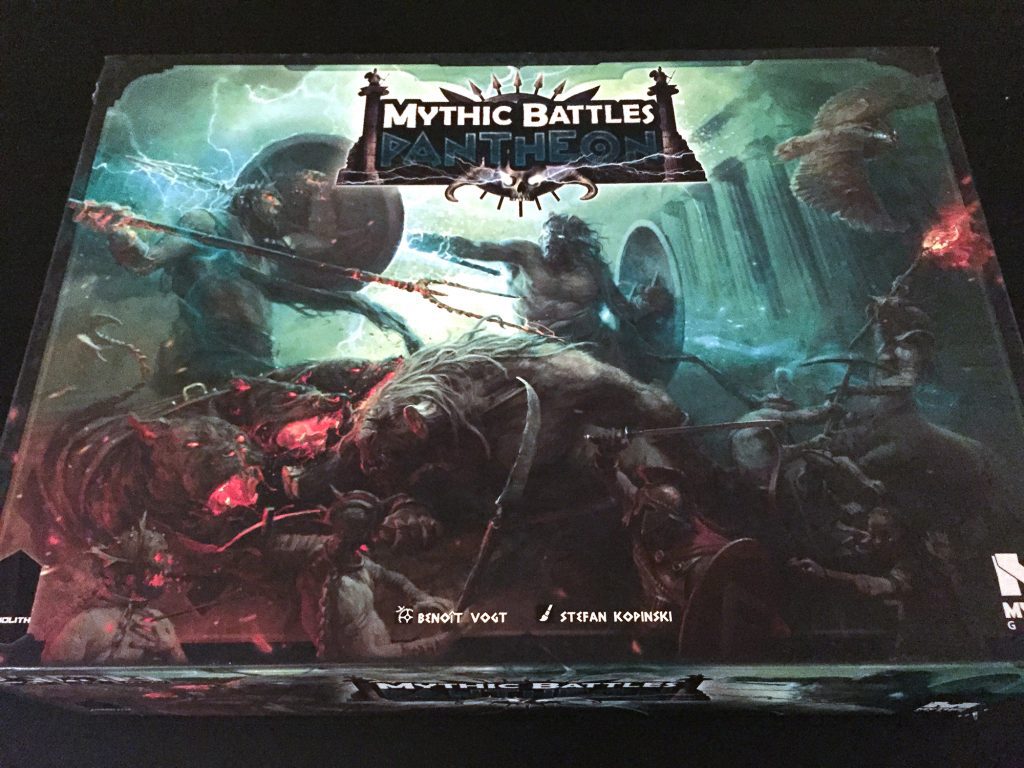 A miniatures game that allowed me to take everything I knew and didn’t know, about greek mythology and send it all into this fantastical end of the world death match. Suffice to say, I got to kill a god and I am very happy about that. Let’s review Mythic Battles: Pantheon.

Mythic Battles: Pantheon was one of my most anticipated games of 2017. I’ll just tell you up front that I love this game. Don’t run off though, let me tell you why.Don’t stop reading now, that doesn’t mean you’ll like it, but my goodness do I like it.

Mythic Battles Pantheon is actually reboot of an older game called simply Mythic Battles.  I’ve been told that the games are similar but Pantheon has definitely made some major adjustments. Publisher Monolith teamed up with Mythic Games to produce this version.  That got me especially excited because I love Monolith’s other title Conan. But Mythic Battles is very different from Conan; in fact it’s actually different than a lot of miniature games I’ve played.

Mythic battles starts the way a lot of miniature games start: with drafting your armies.  I always enjoy a good draft but it is especially fun when you are picking characters not just because of their power but also because of who they are.  You start by picking a god to lead your army, then you choose from heroes, monsters, and troops to fill out the rest. After that, you and your friends pretty much go at it.  You win by either killing the other team’s gods or by collecting a mysterious substance called omphalos. 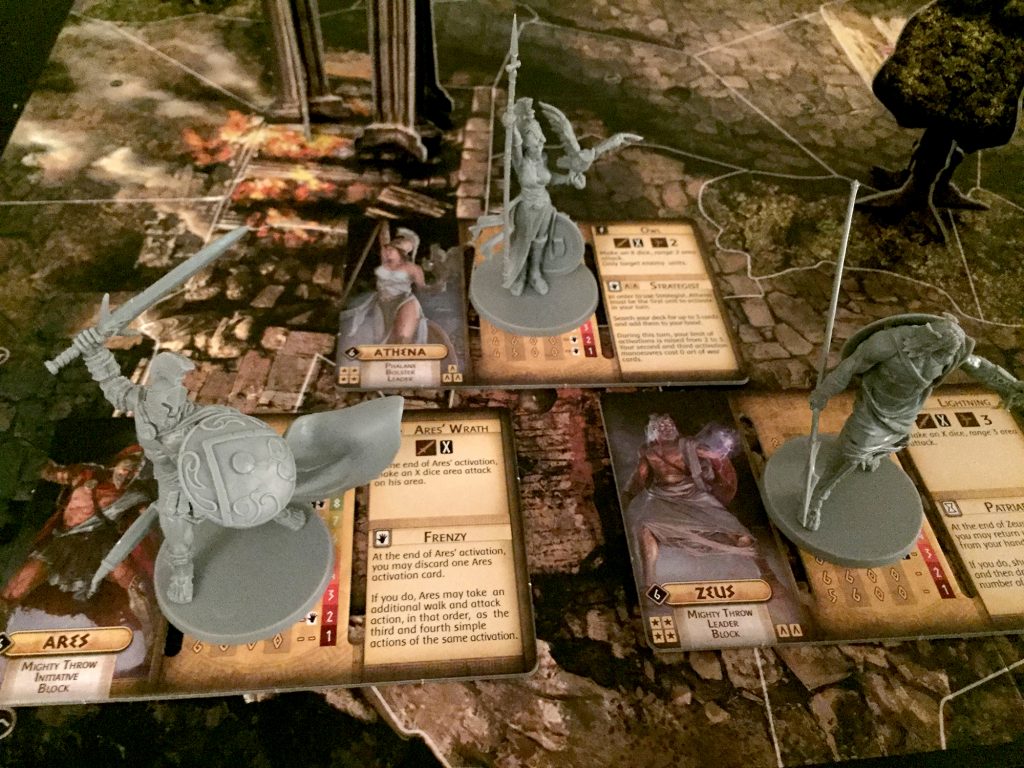 So what makes Mythic Battles so different?  First of all, this is a miniatures game whose core game mechanic is centered around card play. Each character you draft comes with a certain amount of cards.  You shuffle all of those into a deck and then draw three. You can only ever use a figure if you play one of its cards. This makes the game very interesting as you have to account for how many times you’re going to be able to use a certain figure.  You can also use this mechanism to your advantage by keeping track of how many times the other players have used a particular figure.

There is also another type of card called an “art of war“ card.  You automatically get a few of these to start with, but most of them come from figures who bring in extra art of war cards when you draft them. These cards do a wide array of things, each of which you can only do once on your turn. play a second figure, draw more cards, search your deck for a card of your choice, or to play certain character powers from some of your figures.  This is another thing you have to be incredibly conservative of, you only have so many of these and when you run out, you are at a great disadvantage.

While I do really enjoy this mechanic, it does result in some moments where you can’t do anything and you just have to pass and draw more cards.  In rare cases, all players get into a sort of lull, and go back and forth until someone gets the things they need to put the spark back into their army.  I wouldn’t worry about this too much though because it does not happen often. But when it does, it may pull you out of the world a bit. 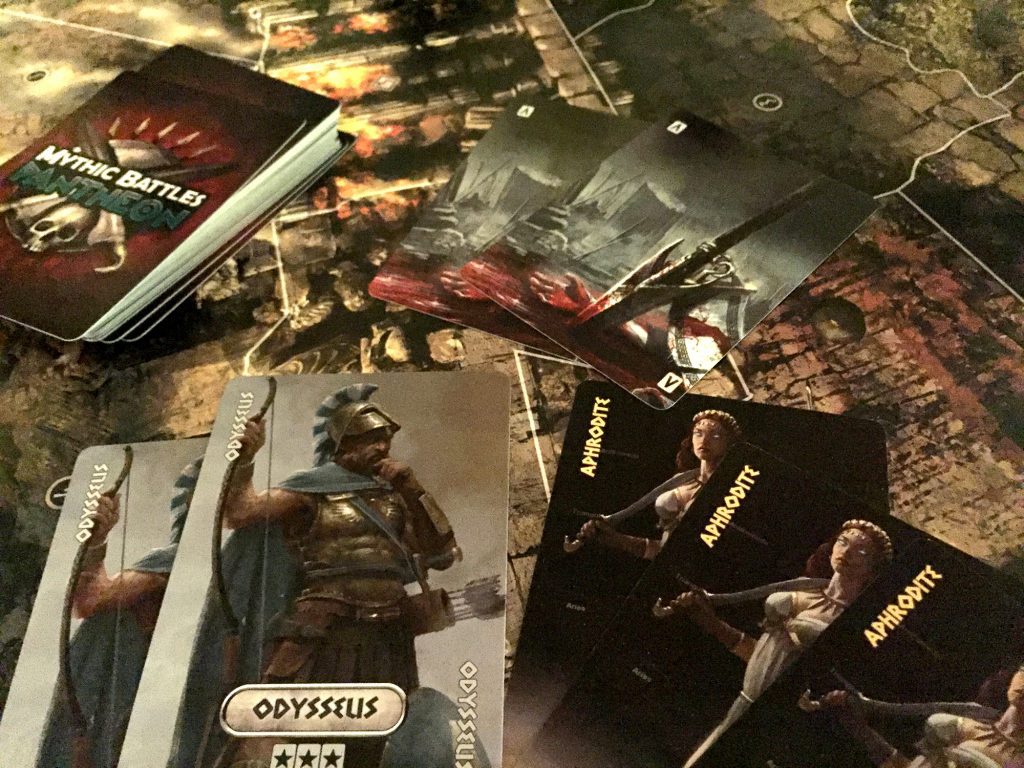 Combat is another thing in this game that I enjoy but will admit it can break your immersion. I won’t go into too much detail about it, but it is heavily math based.  It involves rolling dice and trying to add them in different ways to beat the enemy’s defense. I enjoy it because after you’ve rolled the dice once, you are given the opportunity to make changes as you see fit.  So it’s dice combat that involves some actual tactics rather than just luck. But it’s not going to be your garden variety “both parties roll and the winner is immediately revealed” combat. It takes some thought from the attacker.  But by no means does it leave everyone else out completely. Waiting to see the decisions your opponent is going to make with their dice can be nerve wrecking! But if you prefer the garden variety dice combat it may not be your favorite thing. 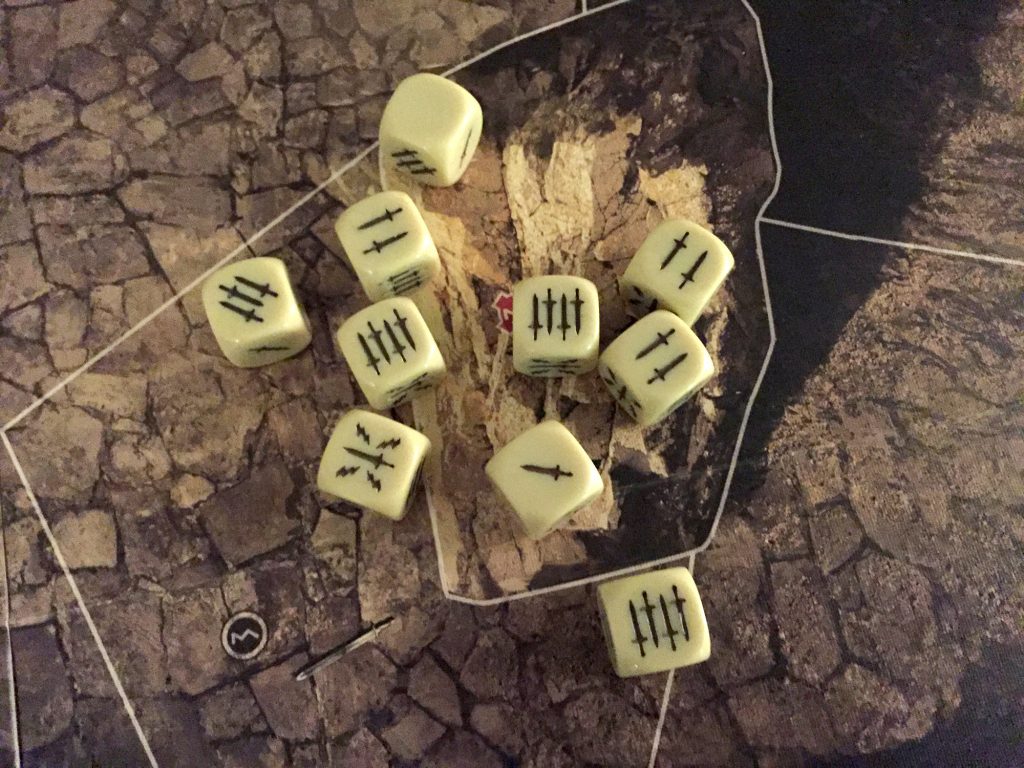 Remember earlier when I was talking about the omphalos?  Those are best explained by going into the backstory of this game.  The goddess Hera, in a jealous rage, releases the titans onto Olympus, resulting in it’s destruction and the release of hell on earth.  The gods’ power is absorbed into these gems called omphalos and they can only get it back by retrieving and absorbing them. There will be a number of these omphalos on the game board and the first player to collect and absorb a certain amount of them win the game. So each game usually comes to a standoff between the gods trying to kill each other or a race to retrieve the last omphalos. 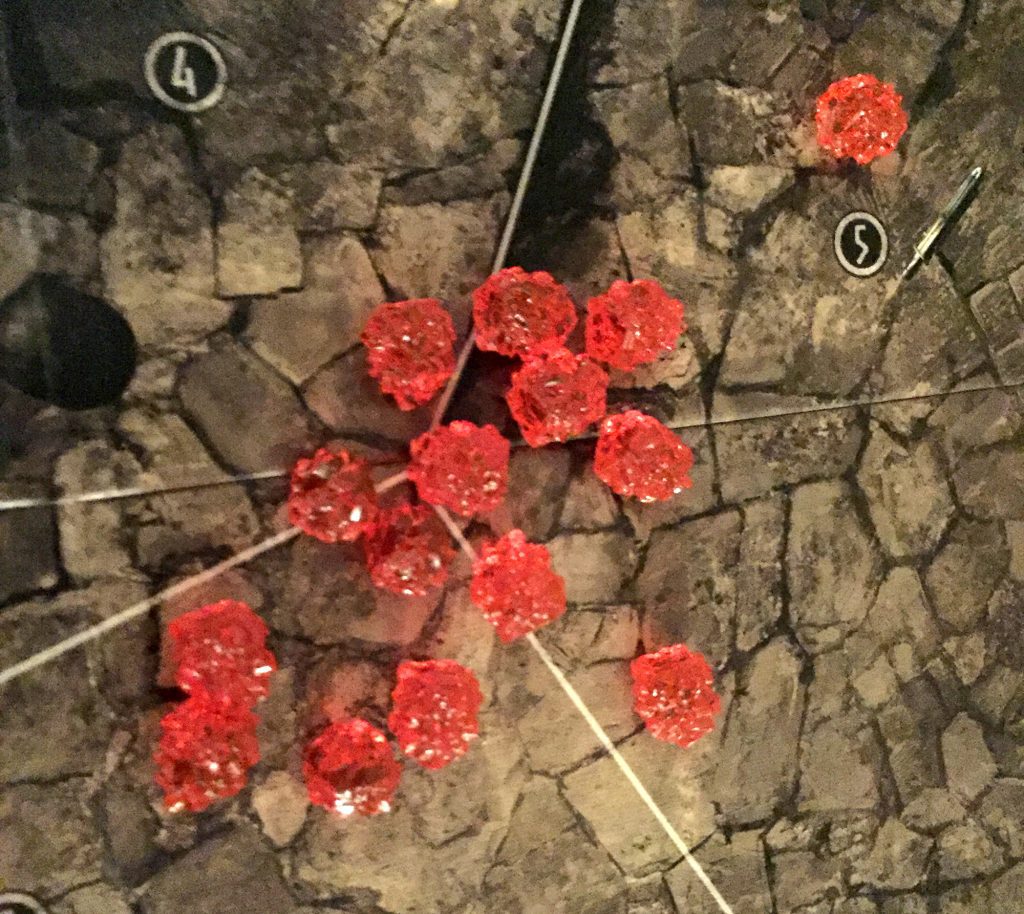 There is a lot of other things that I like about Mythic Battles: Pantheon.  When characters take damage their stats decrease, showing how they are weakening with each hit.  A lot of the unique powers are really cool; or instance, Hercules can just pick up a tree and throw it at people. There is also a variety of maps, scenarios, and even campaigns that come with the game…or you can always just play the skirmish mode, which is my favorite way to play. 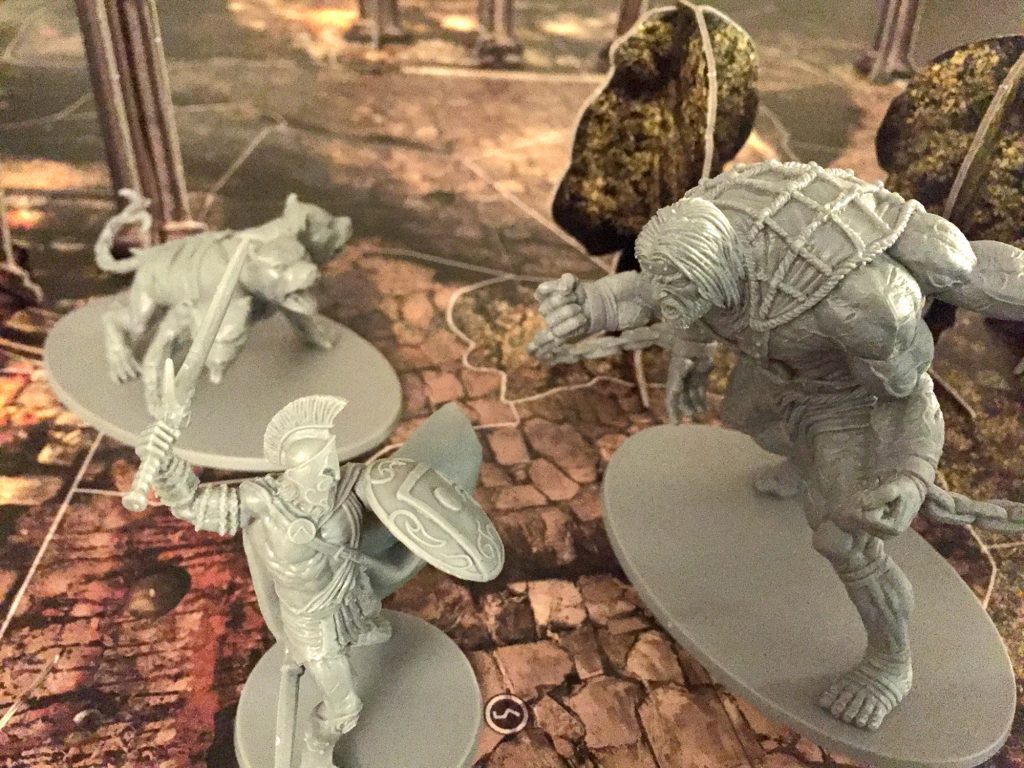 I told you that I loved this game!.  I would play this one anytime, anywhere. I think it is fantastic, but is it for you? If you’re into Greek mythology I think that answer is a definite yes. But other than that I think it really depends on the type of gamer you are.  If you just like pure fast paced thoughtless destruction like Zombicide, Heroscape, or Warhammer, it might not be for you. This game involves a lot of forethought on each move, and it isn’t the most forgiving when you make wrong moves. But if you don’t mind taking your time and planning your attacks and really putting your brain behind your army, I think you will be a fan. 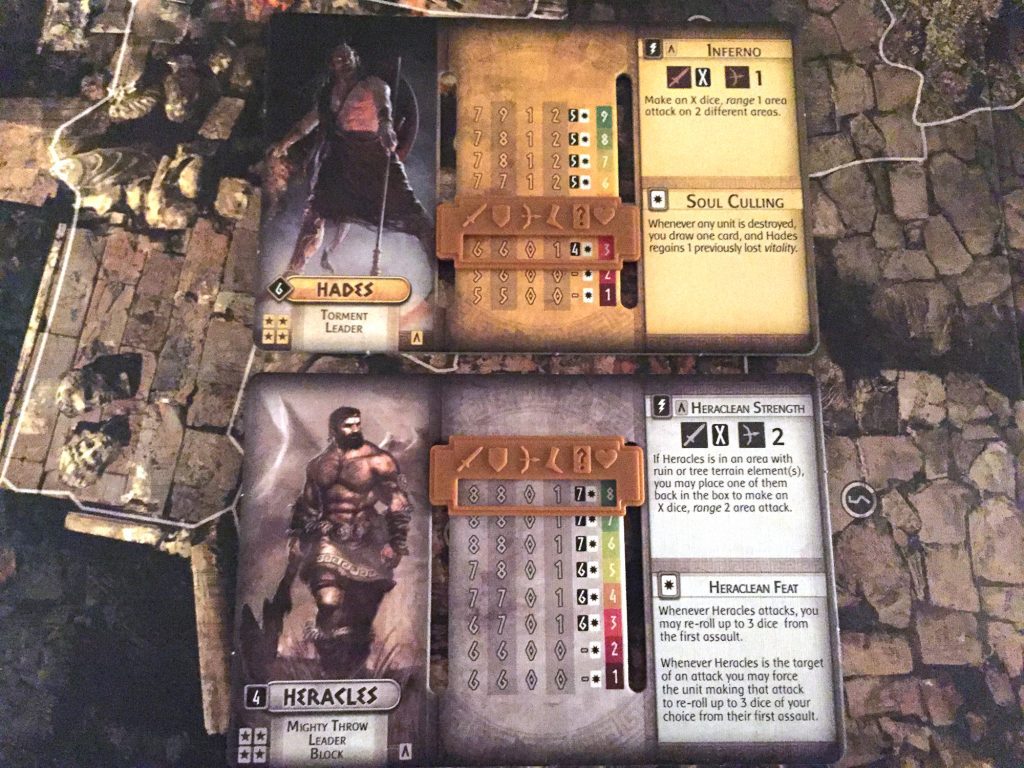 I should mention that, before anybody goes out and buys this game, its Kickstarter pledges were just fulfilled so it still may be a few months before you see it in stores. I have played with the extras that were Kickstarter exclusive, but I have also played with just the core version and that is what I have based this review on. Expansions galore will be released very soon though so if you are not satisfied with the number of characters included in the core box, you will be able to expand your pantheon. If you end up really liking it, I should also mention that Monolith just launched its next Kickstarter campaign, Batman: Gotham City Chronicles, which is in the same vein as Conan.

I love this game and I think it’s fantastic. If nothing else I have said has interested you, just think about what it will be like when you beat all the people in your gaming group and they have to start calling you “the godkiller”.