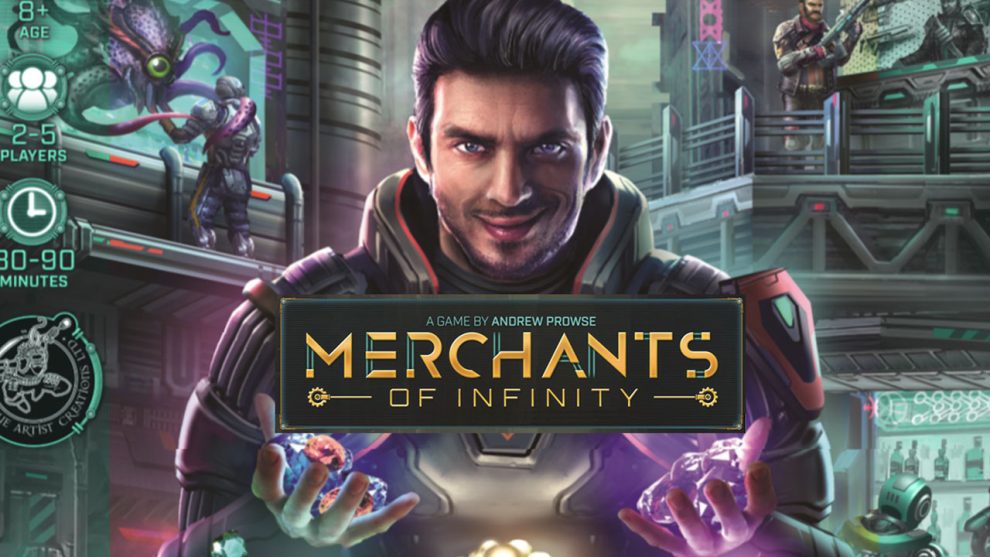 Nicholas Leeman
Add Comment
Worker placement and set collection combine in spaaaaaaace. Check out our Merchants of Infinity review and find out how to jockey for position and resources on a busy space station named after a recently-deceased mathematician.

The object of Merchants of Infinity is to earn as much money (platinum) as you can across multiple rounds. You’re going to earn that platinum by selling goods and completing contracts/objectives on Ship Order and Vortex cards. Ship Orders are acquire-and-deliver, and Vortex cards represent opportunities you’ve found by hanging out at the Black Hole, a watering hole for the galaxy’s most rich and desperate. Fundamentally, you must remember this – you keep nothing but your cash from round to round. Any goods you acquire in a turn must be either delivered or sold at the end of that turn, so planning becomes paramount.

Getting to the Game

The board representing the space station Mandlebrot will go, as so many boards before it, in the center of the table. Depending on player count, give each person some number of giant acrylic meeples in their chosen color and ten platinum. Shuffle the deck of COGS cards and deal out 5 to each player. Players then choose their preference of a combination of three Ship Orders or Vortex cards, however they’d like.

If this is your first game, you have no idea what these mean or do, so pick randomly – it’s not important. Place the remaining decks of those cards near the bottom of the board, and then shuffle and put the Fractal Mirror cards face down on their spot at the top of the board. Take the market wheel out of the box and put it on top of the wheel image on the board so it lines up. Finally, put the clear meeple on the School of Thought space. Ok, let’s go shopping.

To determine who goes first in the round, we’re going to play a game of COGS – a simplistic card game in which the object is to have the highest total at the end. Your COGS cards have either +x cogs on them, or can turn the tables on your opponents by changing their cards with someone else’s, destroying them outright, or even multiplying them (probably your own, in this case). There’s an element of bluffing here, but ultimately, this is just a drawn-out way of seeing who goes in what order. 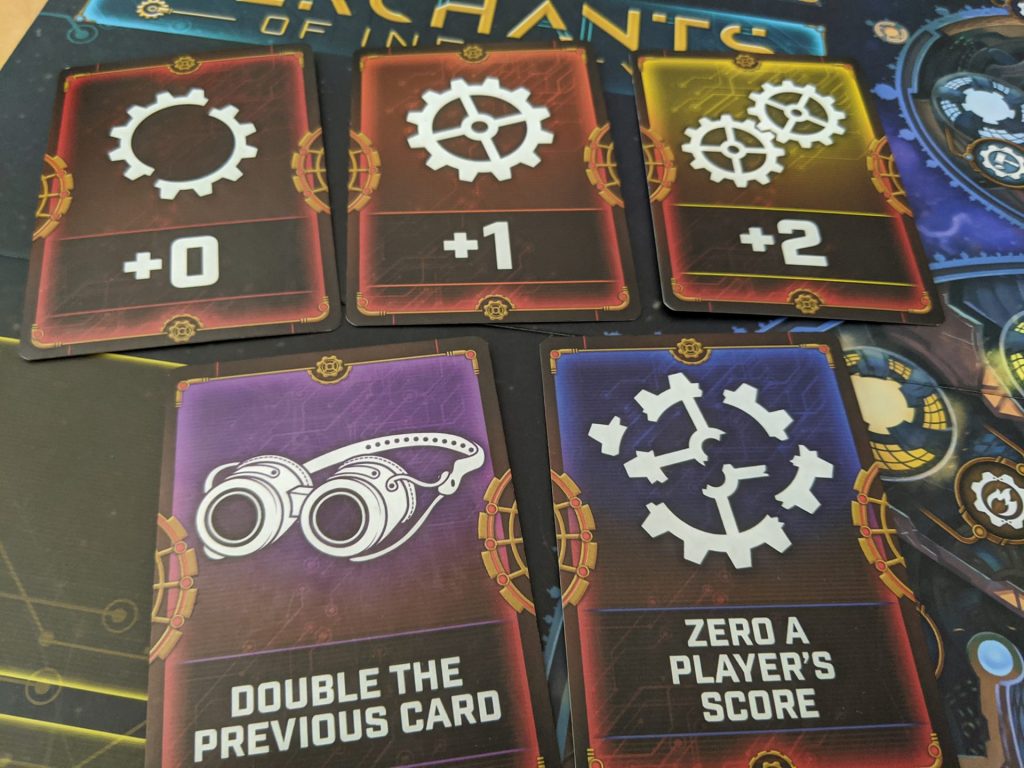 There’s no impact other than that, and as we’ll see later, there’s not as much at stake here as it feels. Going second or even third isn’t a big deal. Once turn order is determined, take one of your player meeples and place it on the turn order track in your designated space. Now the real game begins.

The board is separated out into 34 – yes, you read that right – thirty-four different spaces you can choose to place your meeple. In a three-player game, such as the one denoted in the photos, you’re going to have 5 meeples to use, so choosing wisely is important. Generally, the spaces are broken down between three categories: The Mandlebrot herself where all the goods can be gathered, the ten Station Spaces which let you manipulate the rules of the game a little, and eight Nova Spaces which the rulebook says can be excluded in games where you don’t feel like messing with other players (as these spaces allow you to foul up your opponents’ plans a little). I highly recommend not using these spaces in your first game, as there’s quite enough to focus on without adding a completely different layer. You cutthroat types can add this in your next game when you get the basics under your belt. 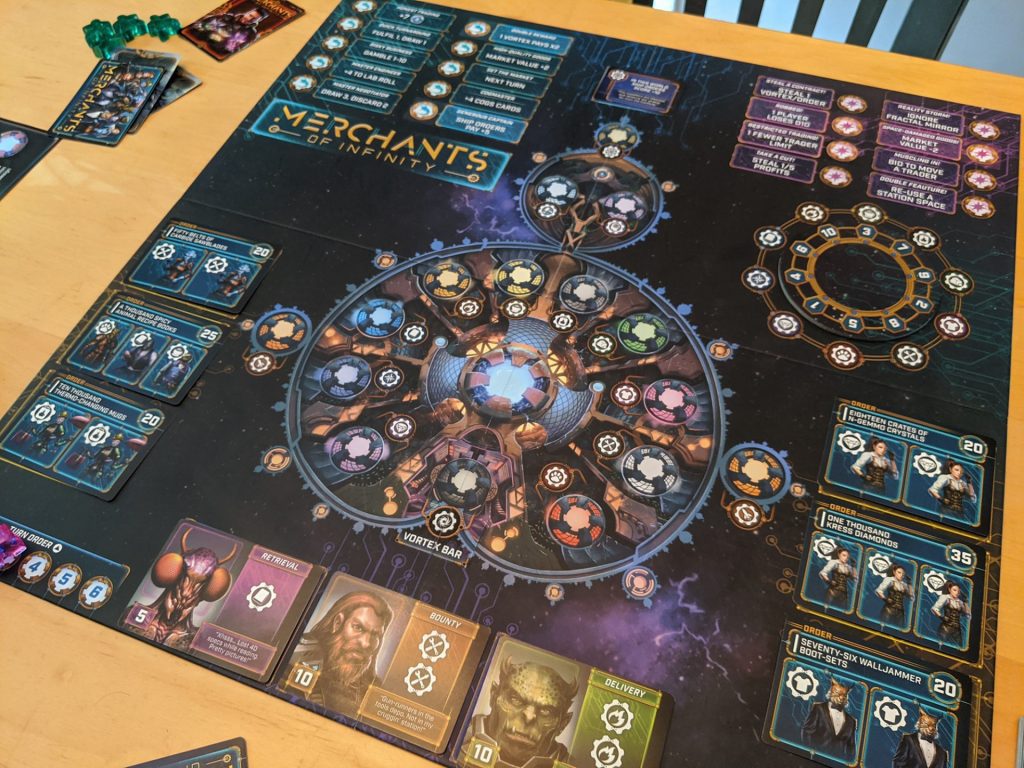 There are ten sectors on the Mandlebrot which give you one of the game’s base goods. Each of these spaces can typically only hold three meeples, so if you’re the fourth person to want one of these, too bad. Now’s a good time to tell you that you can only collect three resources per round, despite where your meeples go. Once you’ve nabbed your third good, you’re cut off from any more until the next round. Presumably because whatever storage cart or sled you’ve brought from your ship is full. 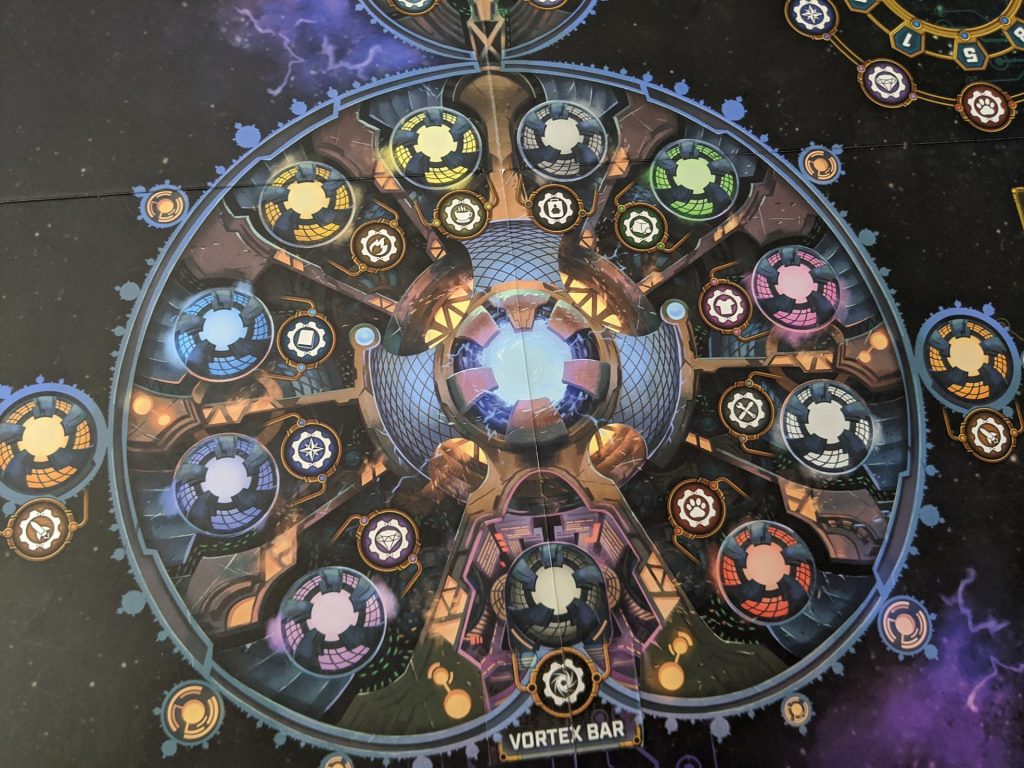 You’ll go round and round the table, placing meeples, collecting goods, bending the rules, gathering contracts, and more until you place your last meeple from the round order track. Once everyone’s out of peeple, you’ll score platinum based on which ship orders you’re able to fulfill, which Nova objectives you’ve met, and which goods you just want to sell outright based on the varying prices on the market wheel. I’m glossing over a lot here at the end, because it can get a little complicated, and that’s not how I want to spend my column inches, dear reader. Suffice to say, you’ll get 4 to 6 rounds to accumulate wealth and the trader with the most at the end, wins.

An Infinite Jest or Nothing to Laugh About?

Ok, now let’s get into the extra-long-shelf-life space protein. You may have gathered this already, but Merchants of Infinity is overcomplicated by half. I have a prototype copy of the game, so there’s lots that could change still, but 34 action spaces is way too many in my opinion for a game that is just a pick-up-and-deliver over no more than 6 rounds. The core idea, hunting for goods on a space station is cool, but there are 10 different goods to choose from, which makes your focus too wide. There are really good ideas here, but they weren’t edited. The COGS game is fun, but doesn’t provide nearly enough impact on the game as a whole for as much time as it takes. 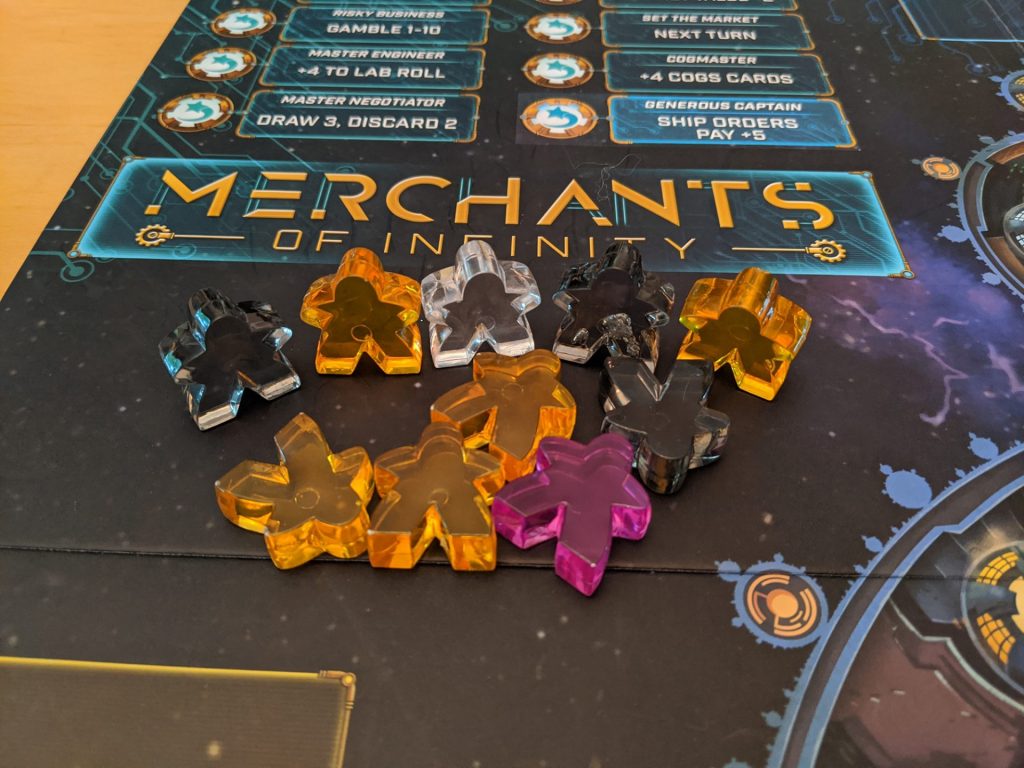 With a limit of three goods per round and four-to-six meeples with which to get them, you’ll make a couple decisions every round that aren’t about gathering those goods. The issue with this is that there’s so many choices to spend those extra actions on, it’s not immediately clear which one you should choose. This inevitably leads to analysis paralysis, and players who are already prone to this ailment are going to be even more triggered here. That says nothing of the last round of the game, when agonizing minutes are spent min-maxing each placement. The game’s box says 30-90 minutes for a game depending on player count, and you can very easily double that in your first game. Our second three-player game took almost two hours. Additionally, and I hesitate to bring this up, because it’s very likely to change before the campaign goes live, but the rulebook could use a complete overhaul.

However, there’s actually plenty here to like. There’s a ton of ways to turn goods into platinum, and since you can’t do all of them you’ll need to plan your own path through the Mandlebrot. This feels like living on an actual, bustling station as you negotiate between seedy bar patrons and desperate ship captains. There’s a fun auction space that allows you to bid your platinum for an extra resource of your choice with all the other players who played there. The problem is there’s too many restrictions on this space; you can’t use it to gain a fourth good, and you also can’t use it to fulfill Vortex cards. 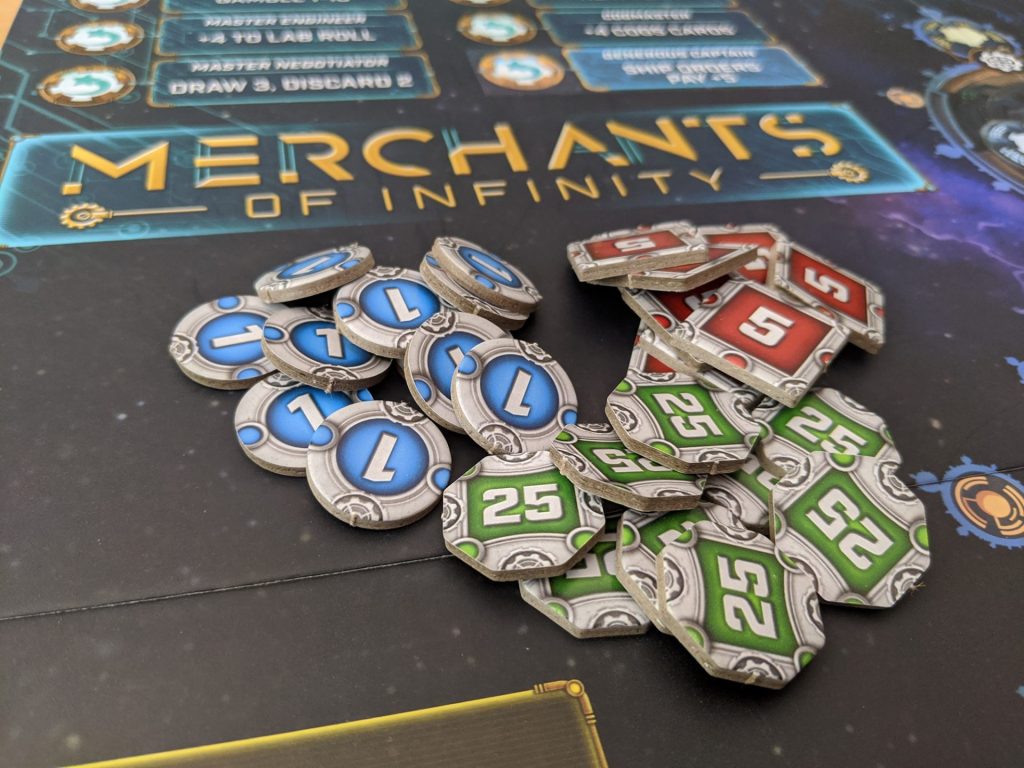 The overall art and aesthetic of the game is spectacular, and honestly is what drew me to the game in the first place. The player interaction spaces are fun ways to needle your fellow players, and can really ruin their plans. You decide whether or not that’s something you want in the game. The changing market wheel is also delightful, allowing a nearly-random distribution of goods prices that can be manipulated in cool and interesting ways. In all, if you were to look at each piece of this game, you’d think to yourself, “Oh, that’s cool. I get that.” But there’s just so many of those things that it becomes hard to see the galaxy for the stars, to modify an old phrase. 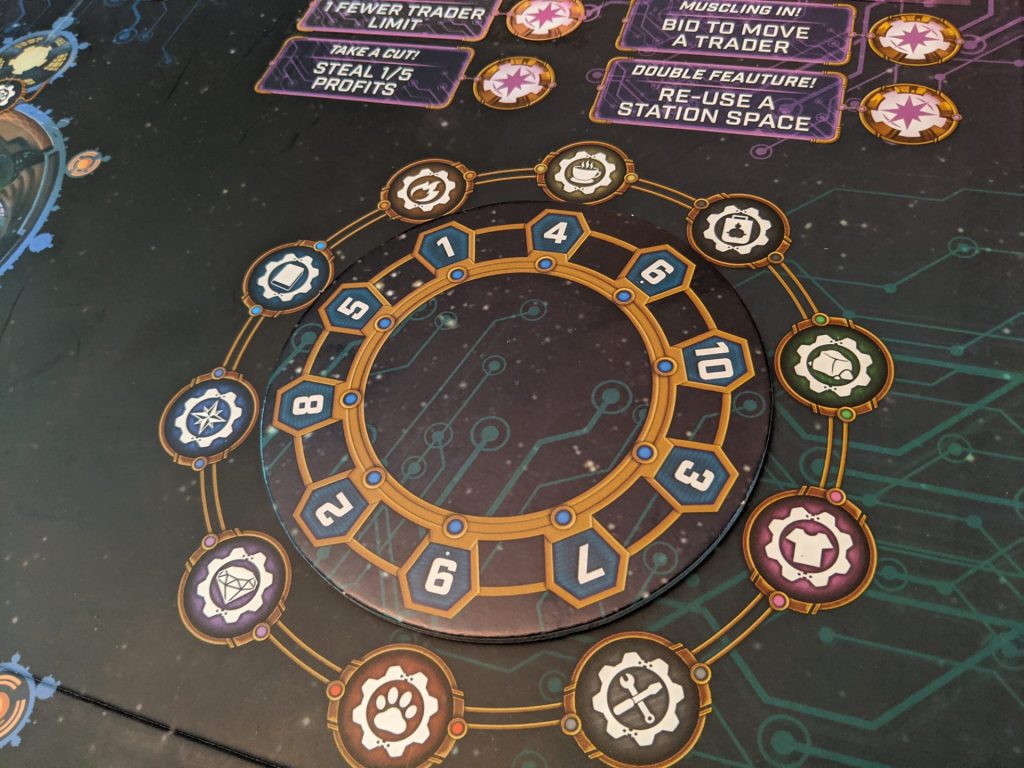 Sebastián Koziner’s graphic design is stellar – there are small issues with the board and helping the players know how many meeples are allowed in which spaces, but overall the game evokes a powerful feel of a space station inspired by fractal math. Tan Ho Sim and Enggar Adirasa’s art fits neatly in the theme, as the aliens across the cards are bright and vibrant. Visually, the game is an absolute delight.

The components I have are similarly great. The acrylic player meeples are big and chunky, the platinum tokens are cardboard punch, but that could change in the final printing. The cards I have are of pretty standard stock, but card corestock is often a stretch goal and could also change here. Without knowing what’s in store for the actual campaign, I’d say that if the final version of the game is just what I have here, that would be totally acceptable.

The visual design of the station, the cards, and the world of the game is spectacular. The components feel great and look wonderful. There’s lots to do in a game world that feels very nearly alive. The rulebook is still a bit of a mess, but that’s totally normal for a game at this point in production. Overall, while this game really has a valuable core of fun at its center, it can’t get out of its own way long enough to mine it out. I also want to be super clear, again this is a prototype pre-release game and ruleset, so there’s plenty of time for changes that could vastly improve this title. I’m giving Merchants of Infinity a score of A Point Called Z in the Complex Plane.

Nicholas Leeman has been reviewing board games for nearly 3 years now, and does video reviews on his own channel: youtube.com/glhfboardgames. He lives and works with his board-gaming wife and young son in Minnesota, where he also spends his summers as a PA announcer for the St. Paul Saints.