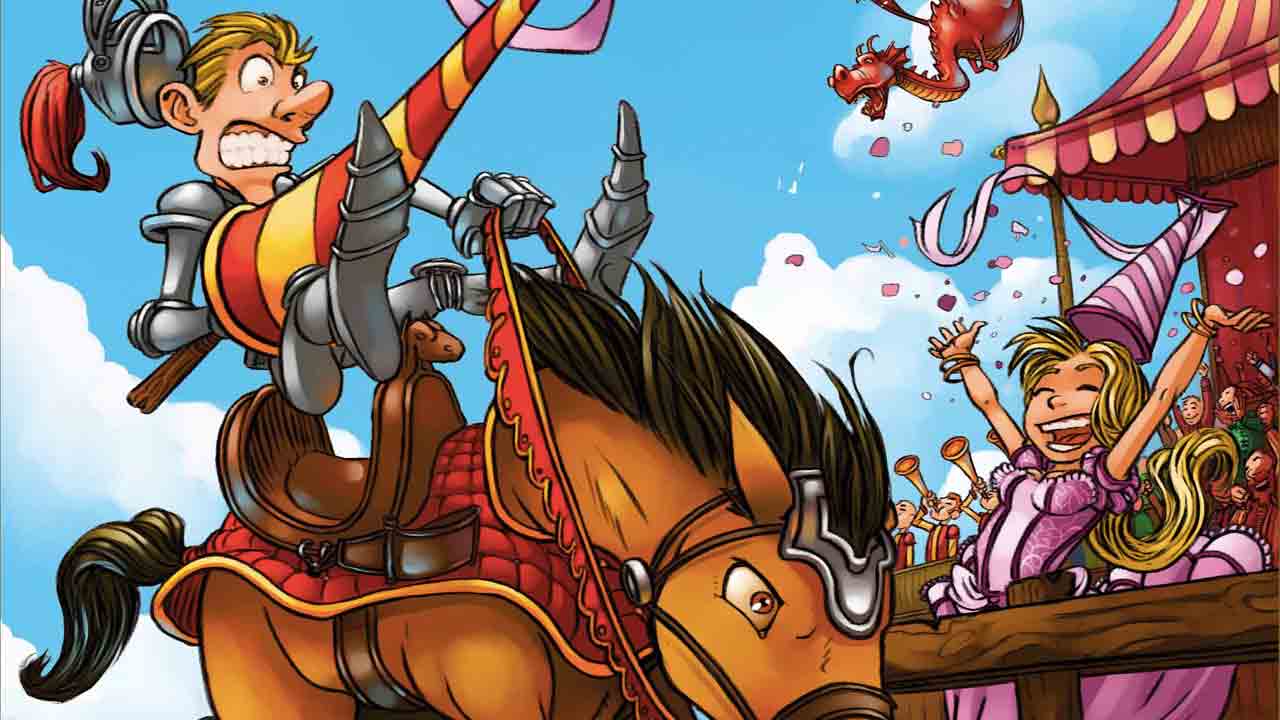 Chivalry isn't dead, it's just in training! Will you be the student, or the master? Read our review of Medieval Academy.

In Medieval Academy players take on the role of squires training to become Knights of the realm. Players advance by mastering combat and fighting dragons, but also by broadening their education, serving the King, and demonstrating their chivalry and gallantry. Only one player will be selected for Knighthood by the King, so let the training begin!

Medieval Academy is a card drafting game for 2-5 players which takes place over 6 rounds and plays in 30-45 minutes. The game is composed of a deck of 52 cards, 7 double-sided game boards, and a large number of scoring tokens. Players compete to place first in as many of the game boards as possible which will score them points at the end of each round. The player with the most victory points is the winner.

How to Setup Medieval Academy

Setup is straightforward. Lay out the 7 game boards as illustrated below. Each game board is double sided with each side offering different scoring conditions to allow for expanded replay value. 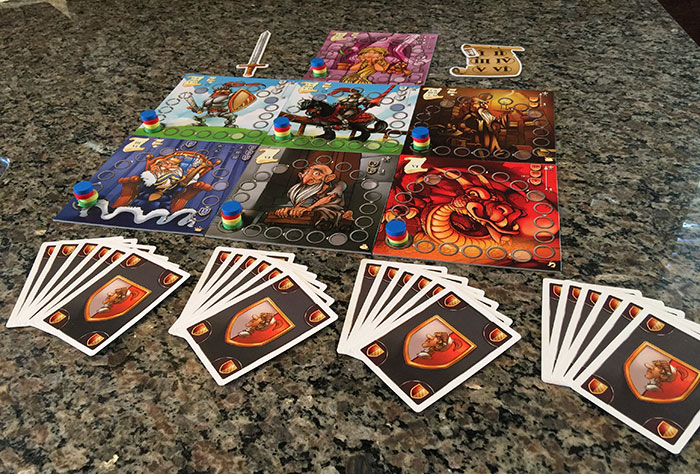 Lay out the scroll containing the round markings and turn order indicator. Place the hourglass piece on Round I. Shuffle the deck of Learning cards and place them within reach of all players. Make distinct piles of each group of scoring markers. Each scoring marker will have an icon matching that of a game board, with the exception of the Gallantry board.

Each player will take all pieces of their color, placing 1 circular disk on the bottom left corner of each of the 7 game boards. Deal each player 5 Learning cards. Select a start player and bestow upon them the completely unnecessary but also completely awesome first player sword marker. The game is now ready to begin.

How to Play Medieval Academy

There are 7 distinct game boards included with the game. There are 2 additional boards that can be obtained from the publisher allowing for mixing and matching. Each board is double side and contains everything the player needs to know to play on it, and to score it when appropriate. Let’s take a closer look. 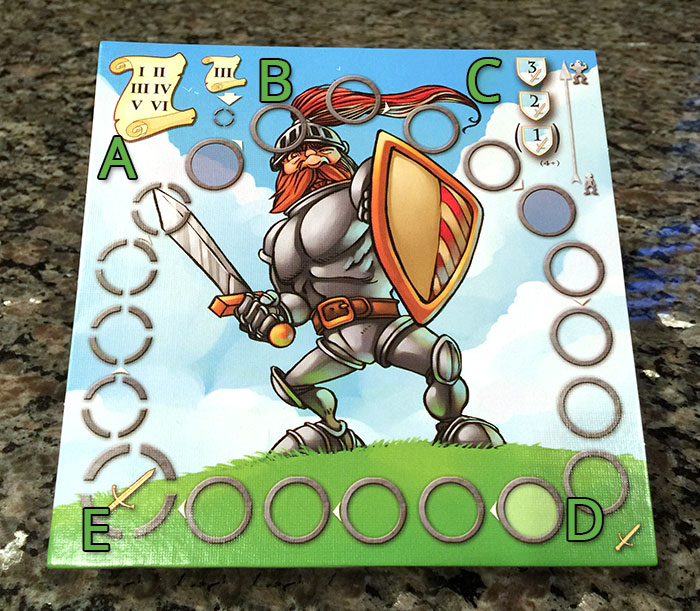 At the beginning of each round players are dealt a hand of 5 cards. Players will select a card they wish to play and lay it face down in front of them, then pass the remainder of their hand in the direction currently indicated on the round tracker. In the first round, cards are passed clockwise, then afterwards the cards are passed in alternating directions. 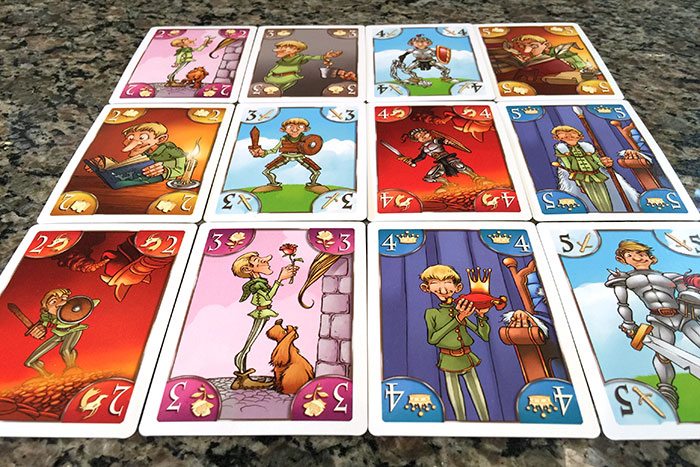 After all cards have been drafted players pick up their cards and each play a single card, starting with that round’s first player. Players will advance the scoring marker for the board they selected (between 2 and 5 spaces). If a player moves a piece and lands on the same space as another player, the new piece is stacked on top of the old piece and is considered “in front of” for scoring purposes. Play proceeds in the appropriate direction until each player has played 4 cards from their hand; the remaining cards are discarded.

Scoring tokens are broken into 6 groups, to match the 6 suits in the deck. There are a large number of Joust/Tournament tokens (a sword), and Education tokens (a book), fewer King’s Service tokens (a crown), and only a few Quest (a dragon), and Charity (a moneybag). This lines up with when each board is scored. 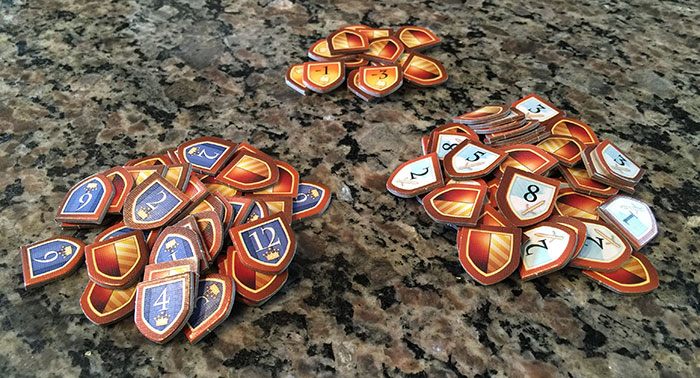 At the end of each round, players will determine which boards need to be scored, and which players are in the lead. If there is a situation where two pieces occupy the same location on a game board, the piece on top is considered to be “in front” for scoring purposes. Players identify the score they have earned that round, take the accompanying scoring token and place it face down in front of them. All applicable game boards are reset and play continues in the next round.

Play continues until all 6 rounds have been completed at which time players tally up their points, including negative points from the Education and Charity boards. The play with the most points is the winner.

The components in this game are really good quality, which is par for the course from Iello Games. The box is well made and sturdy, with linen finish even on the exterior. The boards and tokens are thick cardboard with bright colors and easy to read text. The player pieces are nice wooden pieces with bright colors.

The art in this game is fun and entertaining, and quite thematic in fact. The cards in each suit go from 2-5 and illustrate your squire growing in strength and stature, a nice touch.

The game plays fast and is quite fun. If I’m playing my 10yo daughter we can usually finish a game in around 20 minutes. 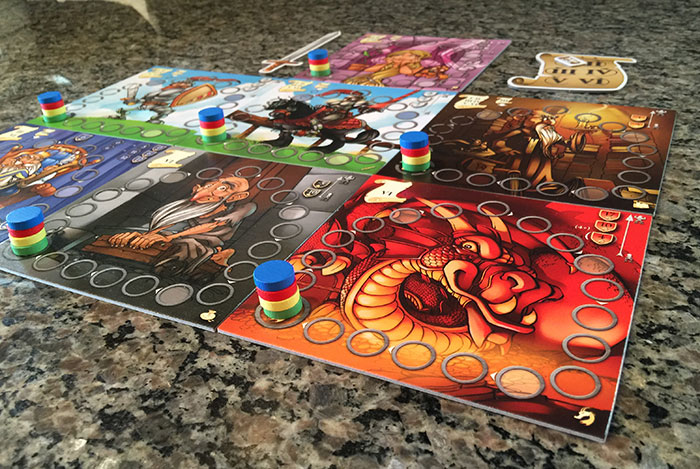 What I Dislike About Medieval Academy

While I love this game, there are some things I think could be improved.

The player pieces, while high quality could stand to be a little thicker. As it is, they’re a little hard to pick up for someone with big hands like me.

The point tokens are wholly unncecessary and a little annoying. I know that keeping them face down adds to the strategy, but I wish there were a better way of keeping track of your score.

This game is a reprint of a French game, and while the rulebook does a decent job of explaining the game, there’s a few places where the translation didn’t do a great job.

One of the things I like best about this game is that it’s fairly simple. Sure there’s a lot of tokens, and extra pieces, and that ridiculous sword. But at it’s heart Medieval Academy is just a card game. And it’s one which forces you to make some hard decisions. There’s been plenty of times I wanted every single card dealt to me, but I’m forced to pick one and pass the rest on; not knowing what was coming my way from the player on my right. Do you go for relatively quick points from Jousts and Tournaments, at the expense of neglecting Education? Is it better to focus heavily on King’s Service, or go Questing? The 17 points from Quests is pretty appetizing, but never forget the last player on the Charity board will lose 10 points.

Medieval Academy is a fun, fast card drafting game with tough choices, fun surprises, and some nice head to head competition. Couple that with the high quality components and great art and you’ve got yourself a winner!