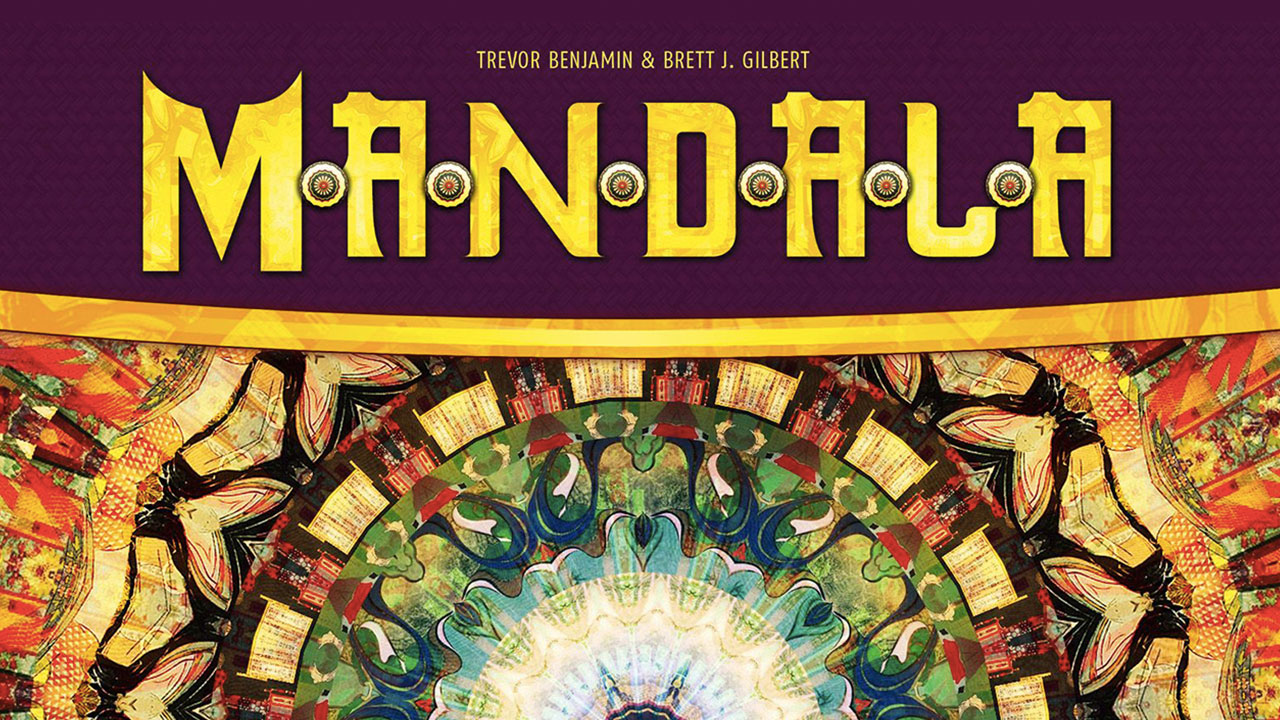 Mandala may seem like a nice quiet game of playing colorful cards, but is there something deeper to find here? Read Ian's review of Mandala to find out what these beautiful designs are hiding.

It was near the end of Gen Con 2019 when I first came across Mandala. My brain was numb from the sheer cacophony of the convention floor and hours of fervent gameplay. My body was on autopilot. Then, for whatever reason, I stopped at the Lookout Spiele booth, sat down, and played the best game I’d seen during the whole convention. 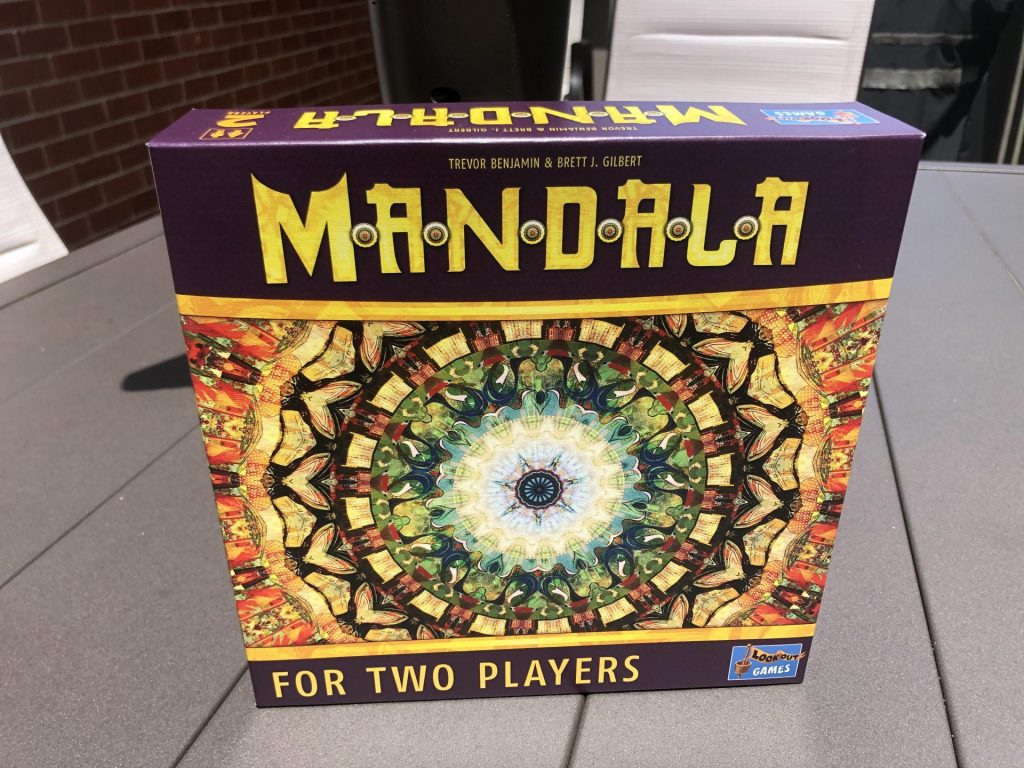 Maybe it was the bold, beautiful images splashed across the cards that made such an impression on me. Perhaps it was the cards themselves, cute little squares crowded together in my hand. Some part of it had to be the cloth playmat that comes with the game, a relatively rare find in this hobby. Or maybe it was the general theme of Mandala, an idyllic promise of creating meditative religious symbols that spoke to my fatigued mind. Whatever drew me in, the first game had me hooked.

As with many abstract games, the premise of Mandala is simple: a pair of players will commit colored cards from their hand to the board, hoping to score the most points from sets of same-colored cards at the end of the game. The board — that lovely cloth playmat — is divided into halves (“mandalas”) that operate identically and independently, meaning that they’re both governed by the same rules though cards played on one half will not affect the other. Each half is then subdivided into 3 zones: a Field for each player separated by the Mountain. During their turn, players can play cards to one mandala, placing the chosen card(s) in either their own Field or the Mountain on that side.

There are 6 colors of cards and each color can only exist in one zone at a time. If your opponent puts a purple card in their Field or the Mountain, you can’t place any purple cards in your Field — though you might still be able to play them on the other mandala, since each mandala is separate. On their turn a player can choose to do one of the following things:

This may not sound like much, but the game’s simple ruleset really comes together when a Mandala is completed. Once all 6 colors are represented in a mandala, players will draft all the cards from that mandala’s Mountain, beginning with the player who had the most cards in their Field. The Field cards will be discarded. The cards drafted from the Mountain will be used to score points at the end of the game.

Each player has a River consisting of a set of squares that will each hold one card drafted from the Mountain. The squares are numbered 1- 6 to indicate how many points the color in that square is worth. At the end of the player’s River is an unnumbered seventh spot called the Cup, which will hold a pile of cards. Each player’s Cup begins with two cards in it, giving players a reason to favor certain colors from the start.

When drafting from the Mountain, a player takes all of one color at a time. If that color already has a spot in the player’s River, all the drafted cards go straight to the Cup. If not, one card goes into the lowest-numbered open spot and any remaining cards of that color go into the Cup face-down. At the end of the game, each card in the Cup is worth as many points as the number matching that color’s position in the River.

To put it more succinctly: each player will be setting their own scoring value for each color over the course of play. This is the lever that makes the whole game move. It radiates through every decision throughout the game. Understanding how the scoring impacts every decision allows you to appreciate the intricate beauty — and simplicity — of Mandala’s design.

Playing cards to the Mountain lets players seed the draft with the cards they want while drawing cards for the next turn, both crucial activities, but the cards played could easily go to the opponent instead. Playing to the Field gives players more control over draft order, which is vital to make sure they can snag the colors or quantities they need, but it comes at the cost of future turns. Balancing those two actions is tricky enough before adding in the fact that each color can only be played in one zone of that mandala. This means playing the right color at the right time can completely erase your opponent’s plans and send them back to the drawing board. 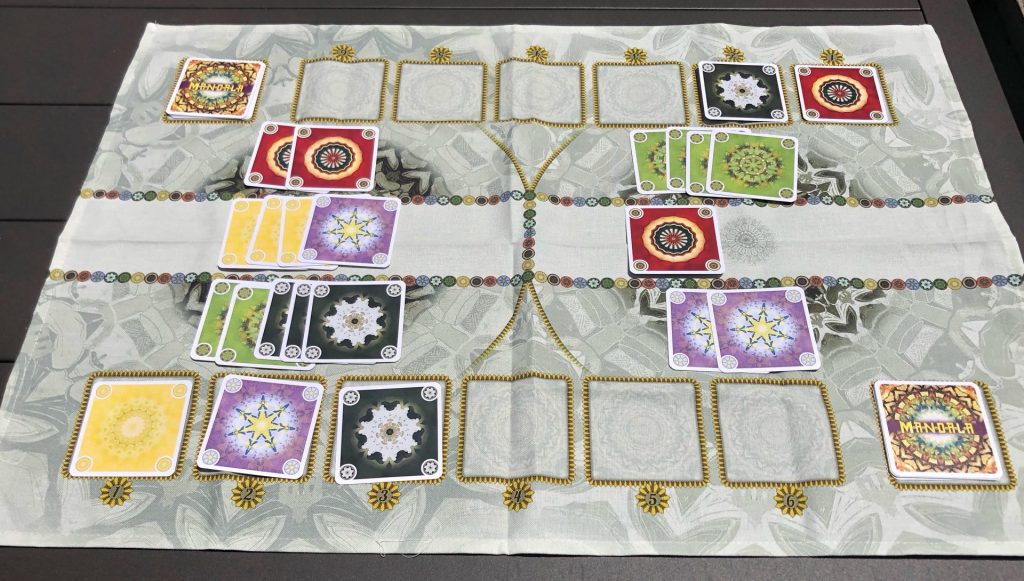 Though Mandala may seem like it’s going to be a relaxing game of multiplayer solitaire, it’s anything but. At its best — and it is frequently at its best — Mandala is a dangerous duel full of feints and bluffs and doublethink. A single card played to the Mountain might suggest that the player intends to invest heavily in that color and the next turn will see them loading up their Field to grab a big stack. It could also mean that they don’t have the right colors to play elsewhere and they’re just playing cautiously, hoping to draw into something more useful. What if, instead, it’s a sign of compromise or a hedged bet: sure, you’ll get that lush stack of greens, but that means I’ll get these yellows.

Or maybe, just maybe, it’s a misdirect, because if a Mountain looks appealing enough a player might overcommit and leave themself vulnerable on the other side of the board. After all, the fact that there’s two Mandalas happening at the same time means that there’s twice as much to think about. Two Fields to fill, two Mountains to empty, twice as many opportunities to win or lose the game with a careless misplay.

A Line in the Sand

Despite all its many strengths, I admit I’ve cooled a bit on Mandala since those initial heady moments. The art is lovely the first time through, but with only 6 designs to see it quickly fades into the background. The cards are a little on the small side. The cloth playmat isn’t strictly necessary and starts to feel slightly gimmicky after a few plays. The theme is so thin it’s basically transparent, which is for the best since it doesn’t stand up to even a cursory examination.

Still, just thinking about this game makes me want to stop writing and go play it again. I can’t imagine a time I’d ever not want to play it again. Some games fade from memory after a single play. Not this one. Like its namesake, Mandala is an ever-changing experience, full of intricate subtleties and unexpected insights. It’s safe to say that Mandala has made a permanent mark on me.