In Las Vegas players take on the “role” of high rollers in classic Vegas casinos attempting to win big at the tables. Roll the dice and choose your table. Will you win top dollar or go home empty handed?

Las Vegas is a dice rolling game for 2-5 players, which takes place over 4 rounds and plays in 20-30 minutes. Las Vegas comes with 6 casino mats each with a single die face on it. 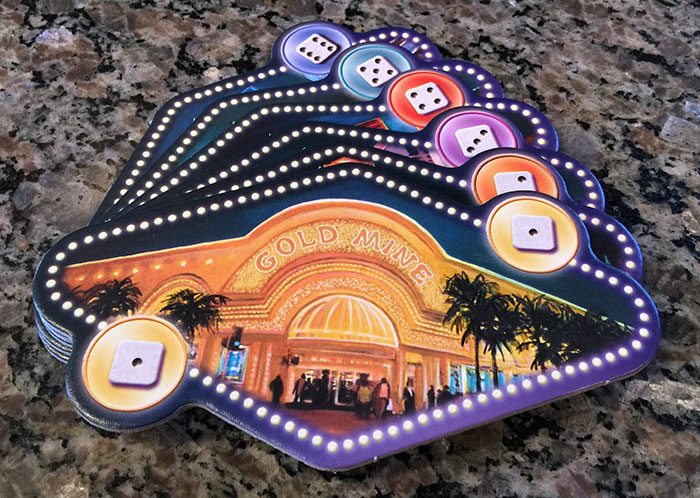 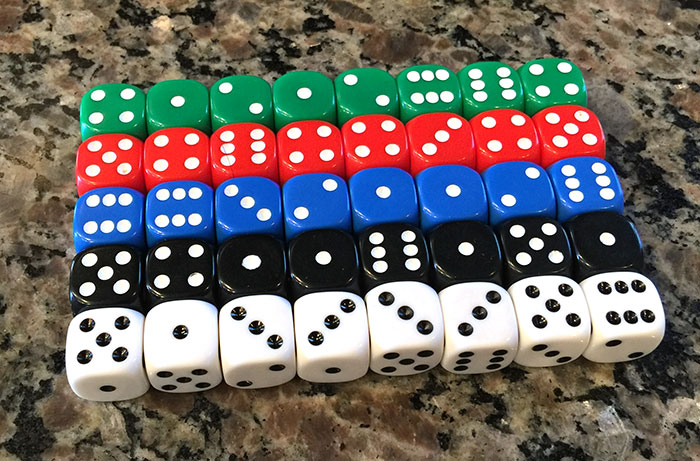 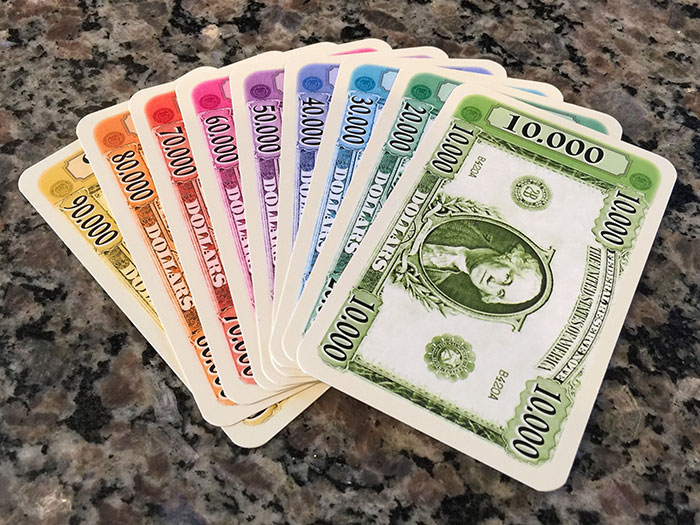 How to Setup Las Vegas

Setup is quick and easy. Each player selects a color, and takes all 8 dice of that color. Lay out the casino mats in ascending order. Shuffle the banknote cards and lay one in front of the first casino. If the value of all the banknotes in front of that casino is less than $50,000 then lay out another banknote. If the value of the notes is greater, move to the next casino. Repeat this process until each casino has at least one banknote totaling $50,000 or more. 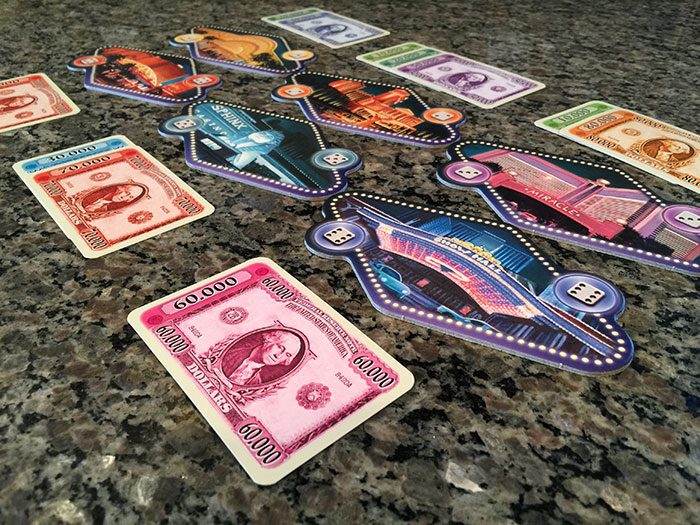 Some casinos will only have one banknote, while others might have 2, 3, or in very rare cases 4.

Select a start player and the game begins.

In Las Vegas players take turns rolling their dice, grouping them by die face, then placing all the dice of one number on the casino with the matching number. Play then proceeds to the left, repeating the process until each player has placed all of their dice. Players may not pass, and must place all dice with the selected number on the matching casino.

Before scoring occurs, all tied dice must be removed from all casinos. In the example below, red and blue would both remove their dice before scoring. 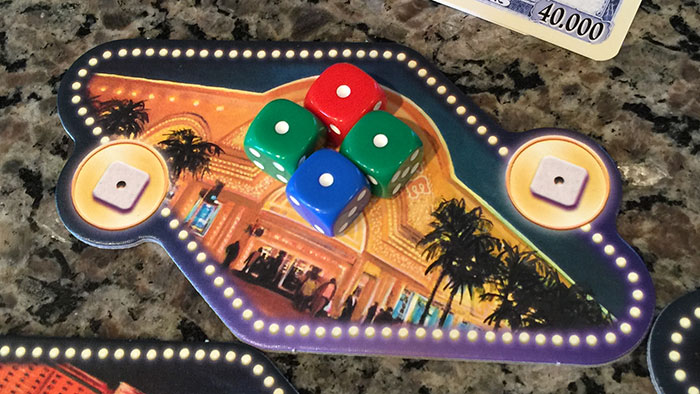 After all ties have been removed, award the player with the highest number of dice at each casino with the highest value banknote from that casino, then remove those dice. If there are multiple banknotes at a casino, the player with the second highest number of dice receives the second highest value banknote. Repeat this process until all dice have been removed from all casinos. Any unawarded bank notes are placed in the discard pile. There is no difference in scoring for the final round. 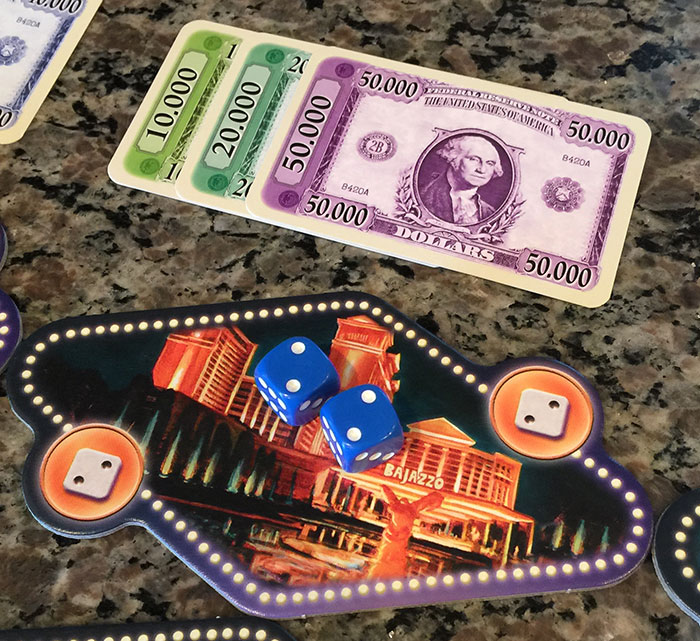 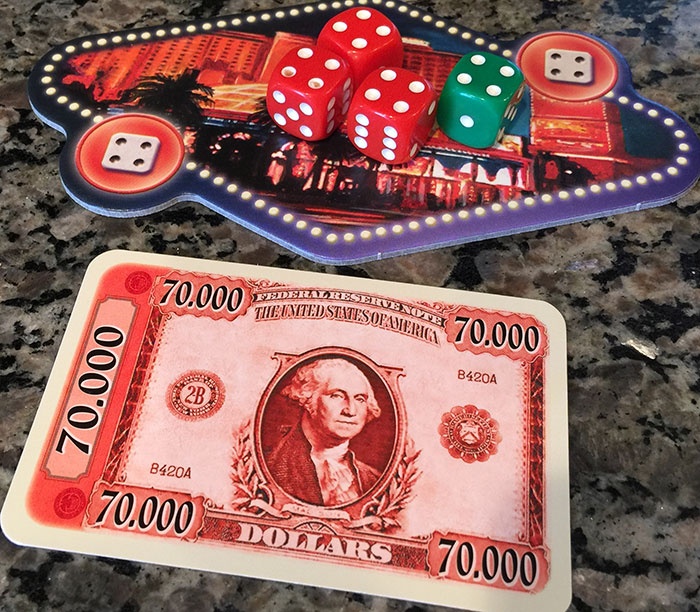 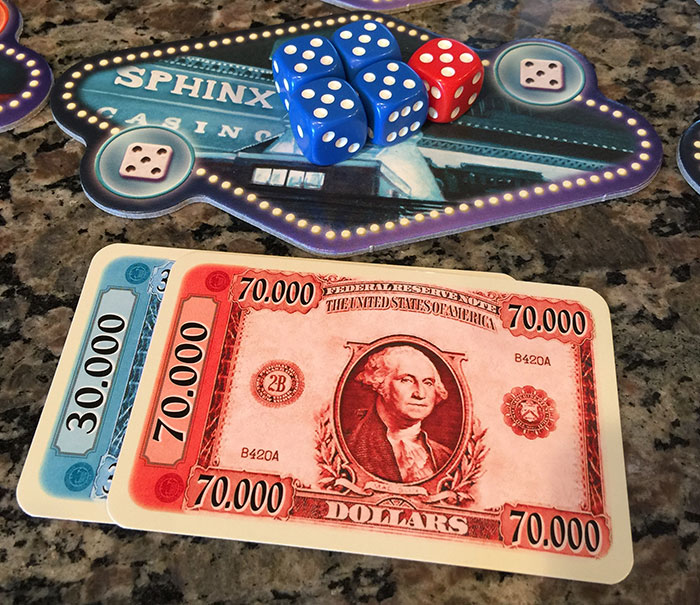 I love everything about this game. All of the components are top notch as you’d expect from Ravensburger. The art is great (there’s not much of it). It’s fast, fun, and has some surprisingly hard choices. Do you put down one dice at a time or drop 5 dice on a casino and claim it at the beginning? If two players are tied for the lead, should you drop in a single die for a high return and hope you can sneak out the win?

Lower player count games are still really fun with the inclusion of dummy dice. Each player takes an even number of dice of an unused color and includes them in their rolls. For example, in a 2 player game each player takes 4 dice of a 3rd color. Play proceeds the same as in a full 5 player game, but the addition of the 3rd color forces players to make different choices. Do I pick a number which has one of your dice and a dice from the dummy player knowing that you’re tied? 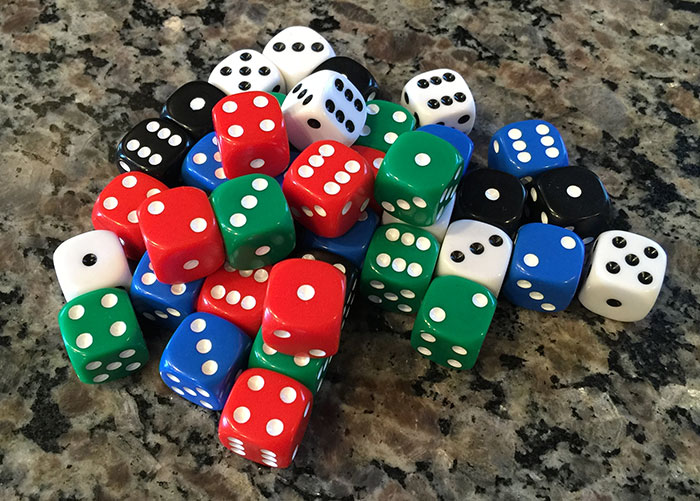 What I Dislike About Las Vegas

The only negative I have for this game, and this is a real stretch, is that the insert is about a 1/4 inch lower than the inside of the lid. That means when turn it sideways stuff gets jumbled. You can partially avoid that by leaving in the cardboard from the casino punchouts. But that’s nitpicking really…

Las Vegas is a fantastic game. It’s honestly one of my favorites, as evidenced by the fact I’ve already played it 10 times this year. Everyone who’s played this game has loved it, and several of them have gone off to buy it for themselves…I think a game can have no higher praise than that. If you’re a try it before you buy it sort of person, then hunt down someone who has this game and get them to play with you. If you’re not, then just go buy it, you won’t regret it.

Diversity in gaming   Spiel des Jahres   Women in board games