In 2012, Richard Breese and Sebastian Bleasdale paired up to create one of the most innovative Eurogames ever created, Keyflower. A huge part of Keyflower’s success was its intriguing tile auction system. Each player is trying to acquire village tiles that can be added to their village which can later be upgraded for victory points. The workers in the game have a dual purpose – they can be used to pay for the acquisition of tiles and they can be used to produce resources, which creates a unique problem. The fewer workers you have available to you, the harder it is to produce the things that you need to upgrade the tiles that you already possess. How many workers are you willing to lose to gain possession of a certain tile? 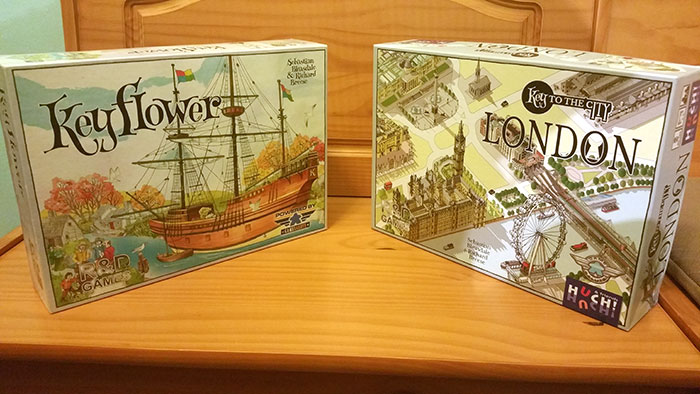 In Key to the City: London, players are trying to acquire city tiles to add to their borough and are then trying to upgrade these tiles to increase their overall value. This is accomplished via the usage of skill tiles and connectors. As players begin linking their tiles together with connectors and gaining skill tiles, they also begin meeting the criteria needed to flip these tiles to their opposite sides thereby making them more valuable – both in terms of victory point value and resource production.

Key to the City: London is jam packed with city tiles, skill tiles, keyples, and wooden connector pieces. The city tiles are large and hexagonal in shape and are divided into several types: home tiles, river tiles, era tiles, and building tiles. These are further divided into Era 1, Era 2, Era 4 Routemaster, and landmark building tiles. Each of these tiles has been lavishly illustrated with an actual London landmark by Katherine Baxter. Indeed, you can even arrange all of the tiles in such a way as to produce an actual map of London! 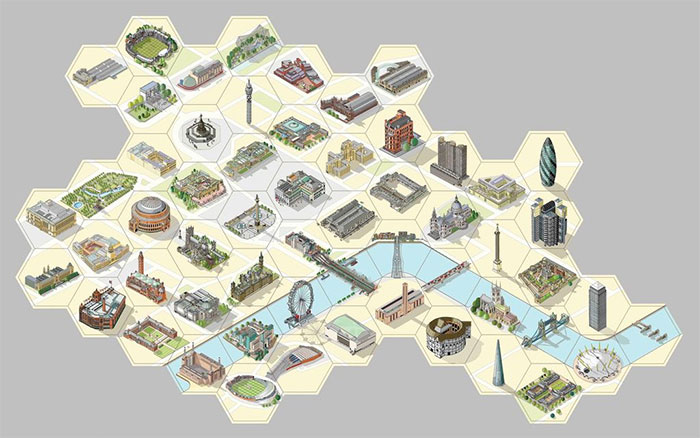 The skill tiles are small and square in shape and feature builders, financiers, and architects represented by bricks, coins, and compasses. There are 40 each of three different colors of keyples – blue, red, and yellow. There are also 6 wooden player barges in different colors for the players to choose from. Each of these player barges also comes with a cardboard screen of a matching color. 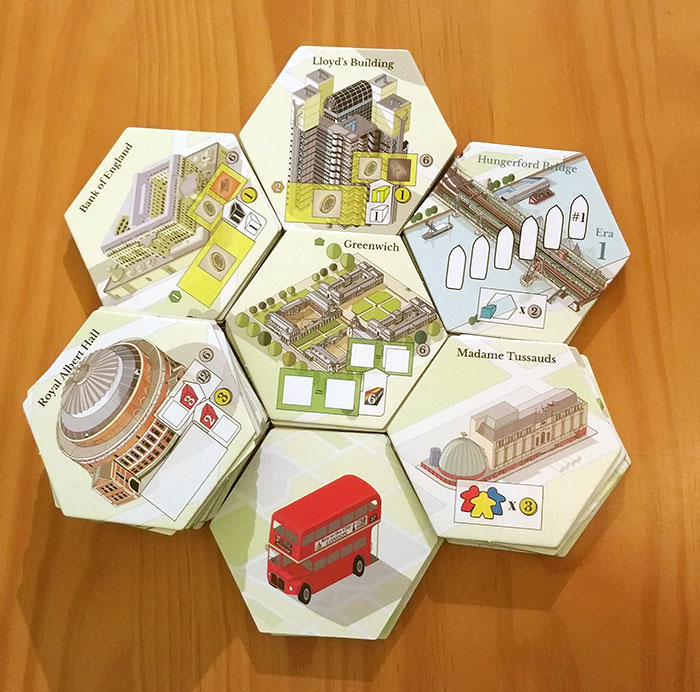 Key to the City: London also includes 144 connectors in six different colors: black, blue, brown, grey, red, and yellow. Each of these connectors represents a particular type of resource that you’d expect to find in a city – telecom cables, water pipes, gas pipes, etc. The colors and their real world associations, however, are not that important for gaining an understanding of the game and how it is played. The game box itself even comes with a handy means of organizing everything! 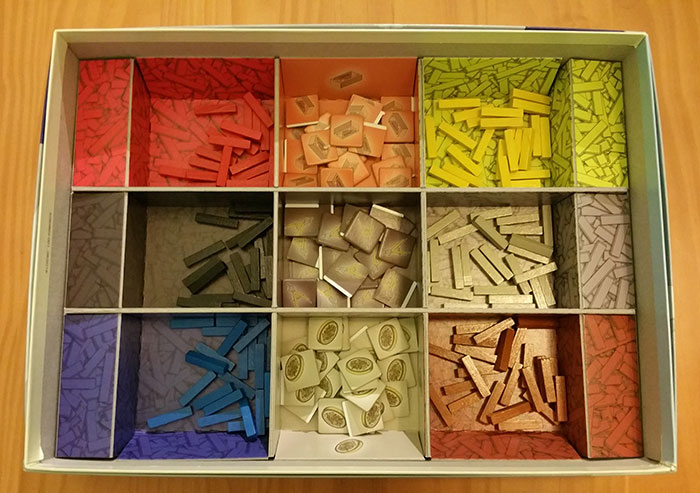 Aside from the components already mentioned, there are also several rulebooks in various languages, a really awesome atlas that provides some historical information about the various landmarks, and a cloth bag to hold all of the keyples. But the coolest component of the game is undoubtedly the 3D models of the landmark building tiles. Comprised of two interlocking pieces, these things just look cool and add a very nice touch to the game as a whole. 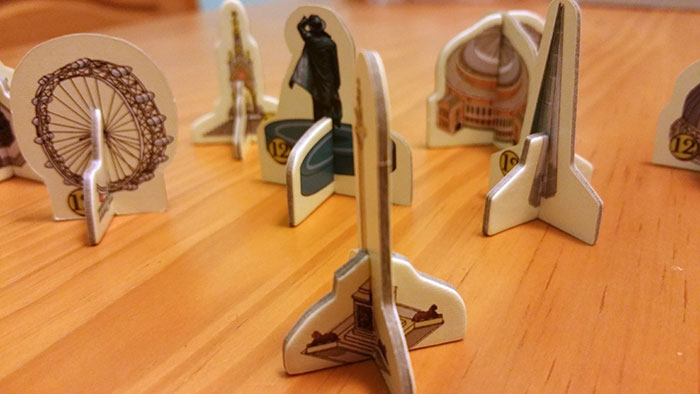 To begin, the era tiles are sorted into their appropriate stacks and then a few are drawn and placed into the middle of the table facing in the same direction. The number of each tile that should be selected is determined by the number of people that are playing. Next, the river tiles are laid out so that each of them connects in numerical order. Each player then chooses a color and takes the screen and home tile of their chosen color. A random player order is determined and the players will place their barges onto the first river tile in that order.

After this has been done, the keyples will be placed into and mixed up in the bag and each player will draw 10 keyples which they will keep hidden behind their screen. The skill tiles and connectors can be sorted and stored in their compartments in the box. Any unused city tiles are kept off to the side because they will be needed in future rounds. You’re now ready to play.

Anatomy of an Era

The game is played in four eras. In each of these eras, players will take turns selecting from one of several different actions: bidding, generating resources, building, passing, or setting sail. I’ll go over each of these one by one.

Bidding: each city tile is hexagonal in shape and each player is assigned a side of the hexagon. When a player wishes to bid on a tile, they will select a number of keyples of the same color and then place those keyples against the tile on their assigned side. The amount of meeples there must constitute a winning bid.

Generating Resources: the player selects a keyple and places it on top of any city tile in the game (even one belonging to an opponent) and then performs the action associated with the tile. Any skill tiles gained are kept behind the player’s screen and any connectors gained must be placed immediately. 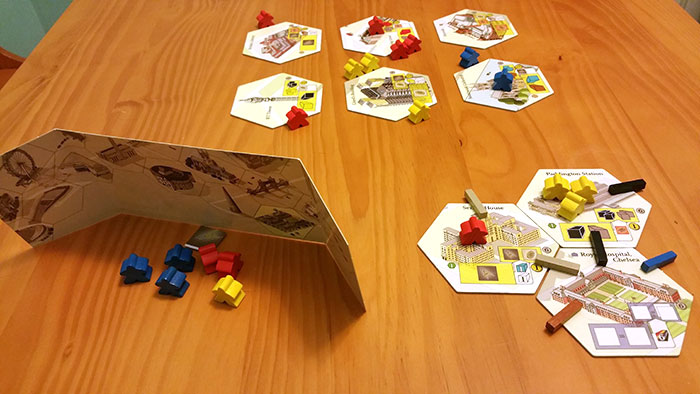 Building: if the player has met all of the qualifications needed to flip a city tile to its opposite side then they will place a keyple onto the tile in question and flip it to its opposite side. Flipping makes the tile worth more victory points at the end of the game and also produces resources more efficiently if it is a resource producing tile (landmark tiles can be upgraded twice). The first time a landmark tile is upgraded, the tile will be flipped over as normal. The second time, the matching 3d model will be placed upon the tile. 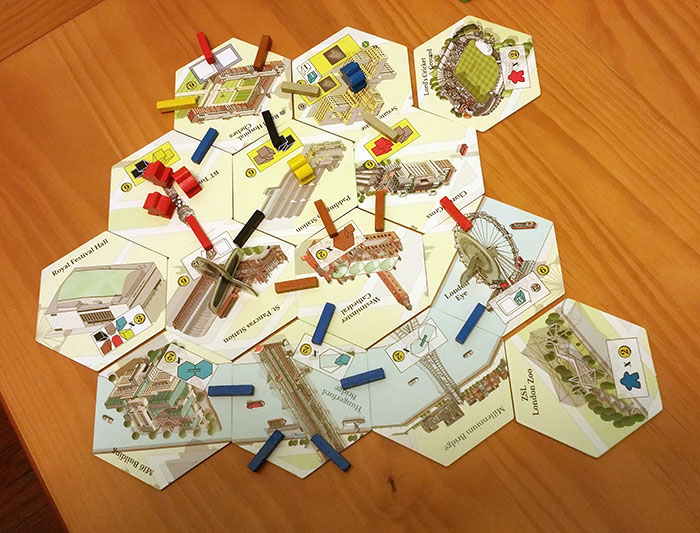 Passing: if the player cannot or does not want to use anymore of their keyples, they may declare that they are passing. However, this doesn’t mean they are out. A player who has passed previously can always jump back into the fray if they choose to do so. If they choose to just end their turn, they can simply set sail.

Setting sail: when a person sets sail, they move their barge from the current river tile to the next river tile in line. Where they place their barge on that tile is up to them. Some spots award more keyples than others but leave the player in a position further back in the pack. One spot on each river tile will allow the player that selected it to add the previous river tile to their borough once all players have set sail. This river tile provides victory points in one way or another. One river tile, for instance, awards points for every blue connector that is attached to it. 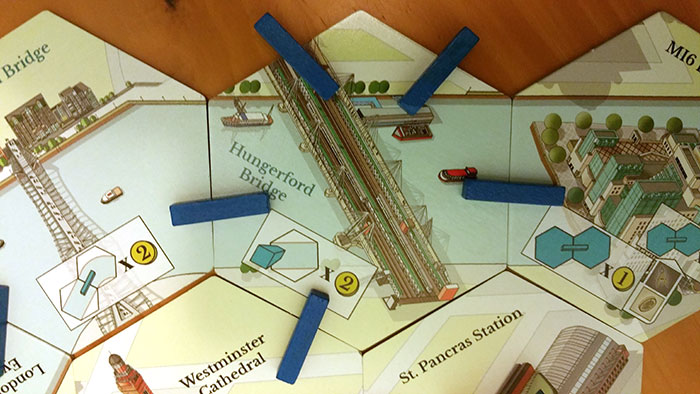 Once all players have set sail, the current era comes to an end. The players collect the tiles that they have won and add them to their boroughs. The keyples that were part of a winning bid go back into the bag. Keyples that were part of a losing bid are returned to their owners. Any keyples that were used to generate resources belong to the owner of the tile that was used to generate the resources. After the keyple situation has been sorted out, any leftover city tiles are removed from the game and new ones are introduced. Then the next era begins.

When the fourth era ends, the players total up their victory points and the player with the most points is the winner. 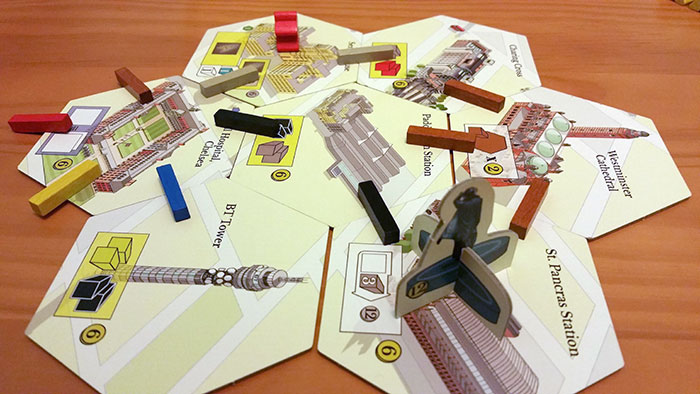 Let me begin by admitting my bias: I love Richard Breese’s games. I have yet to play one of them that I didn’t fall in love with. When I saw this game pop up on Kickstarter, I was excited about jumping on board. However, it was not without some trepidation that I did so. My fear was that the game would arrive and I would play it only to discover that it is exactly like Keyflower. At first glance they bear a lot of resemblances to one another – hexagonal city/town tiles, bidding with your keyples, and city/town building.

It is with great joy that I can report that my fears were unfounded.

Keyflower is a game that is mostly about acquiring resources and transporting them around your town tiles in order to upgrade things. Key to the City: London, however, presents a very different puzzle. Since many of the city tiles benefit from very specific arrangements of connectors, you have to strategically place the connectors that you acquire now so that you can make the best use of the tiles that you will hopefully collect in the future. I know that statement might sound a bit odd, so let’s consider an example. 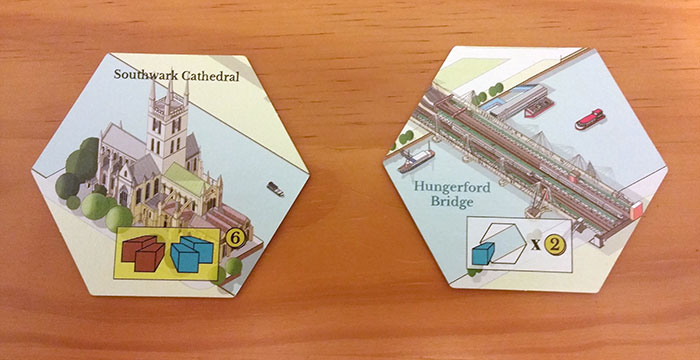 There’s a lot of synergy going on here assuming you’re able to acquire those tiles. This potential synergy may dictate the way that you marshal your resources to best benefit you. Do you bid heavily on those tiles in an effort to win them or do you focus your efforts on maybe just acquiring one of them? If you’re hoping to snag both of them, then this might become your main focus for this particular era. You might even want to try to crank out some red and blue connectors so that you’ll already have a few in place for when you acquire those tiles. If you choose to go after those tiles, then it might mean you’ll have to pass a few times to try to get a feel for how the bidding against you is going to go. Is it worth it to spend a great deal of time and effort pursuing this strategy or should you go after something else?

Key to the City: London constantly presents challenges like these to overcome. There’s a bit of a gamble involved in almost everything you do, and there’s always the risk that you’ll overextend yourself or overspend your resources. It’s a game of risk versus reward versus efficiency. There are always interesting decisions to make and it isn’t always clear just what the best decision is. I like that. It keeps me on my toes and it keeps me involved.

I’m glad that I backed this game and I look forward to getting it to the table whenever I can. Key to the City: London is a game that keeps me coming back for more and it’ll do the same for you.

What do you think about Key to the City – London? Give us your opinions about what you like and/or dislike about the game in the comments below!