Chess is thought to have originated in the 7th century, and is played by millions of people around the world who love it for its strategy and complex thinking. What would happen if we included a bunch of cards into the mix that will throw off your strategy? Enter Kamikaze Chess. 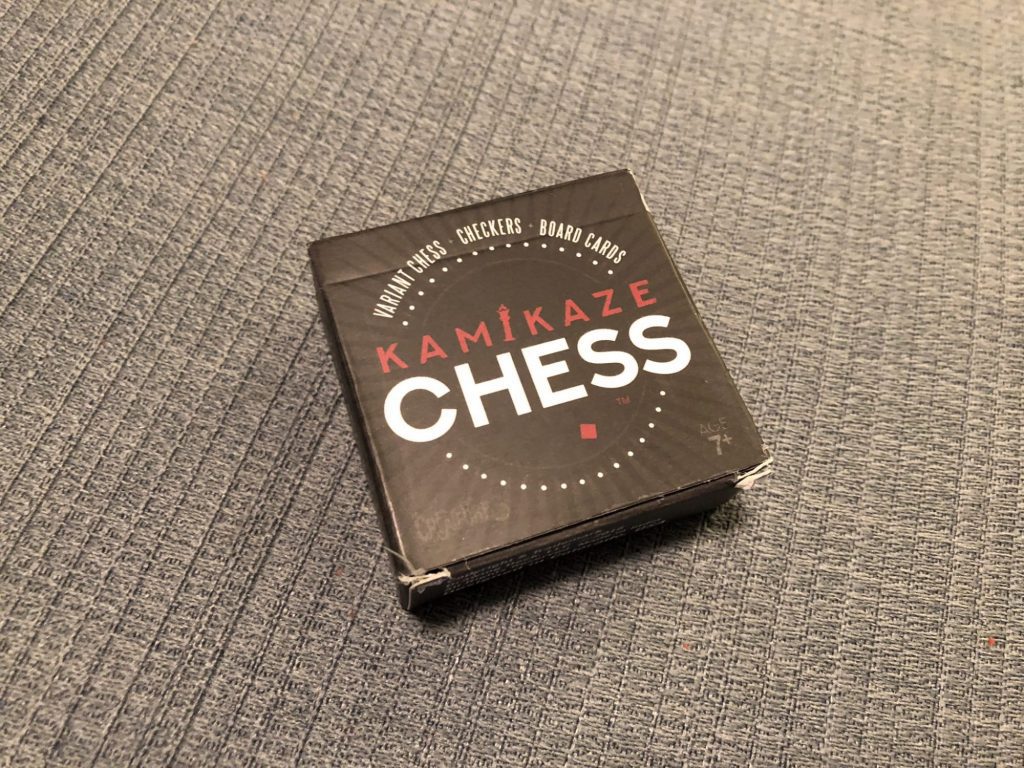 Kamikaze Chess is a small deck of cards – 24 Chess piece cards (12 for white and 12 for black) along with a set of 32 Kamikaze cards. The Kamikaze cards are placed face down to create the Chess board and, when a player lands on one of the cards, it is flipped over and the action is performed. Unless otherwise stated, the action on the card is to be performed by the piece that landed on the card.

The 6 different actions are

Once you land on the card and perform its action, the card is void. The other rules and the winning condition of Chess are the same as a regular game of Chess. 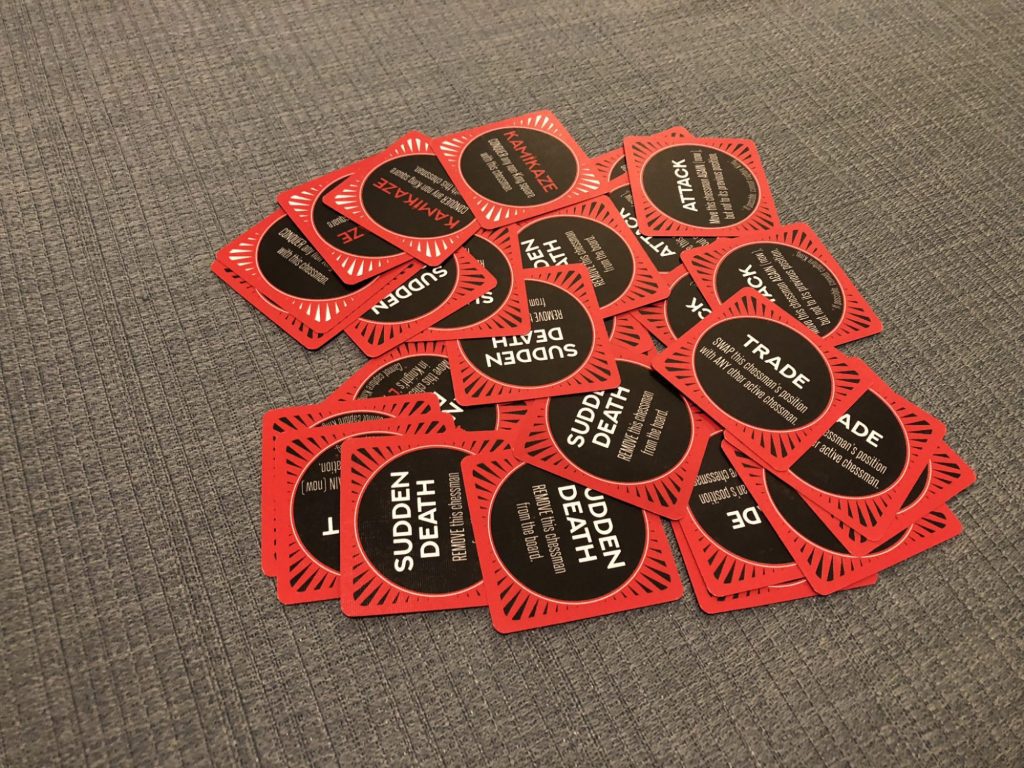 Kamikaze Chess offers two ways to play – Traditional and Kamikaze. In the Traditional setup, shuffle the Kamikaze cards and place them face down on the black squares of the Chess board. Then place each Chess piece on their traditional places. Start the game as you normally would and each time you land on a Kamikaze card, flip it over and perform its action.

With the Kamikaze setup, shuffle the Kamikaze cards and place them face down on the black squares of the Chess board. Then shuffle the other 24 cards (12 for the white pieces and 12 for the black pieces) and place them face up on the white spaces of the Chess board. Take out any Pawns that are on the end lines. Each player will then choose one of their Bishops to move to an adjacent black space ignoring the Kamikaze card. The player who is in check moves first; otherwise, the youngest player goes first. If both players are in check then they each get to move their King to any space on the board ignoring any Kamikaze cards. 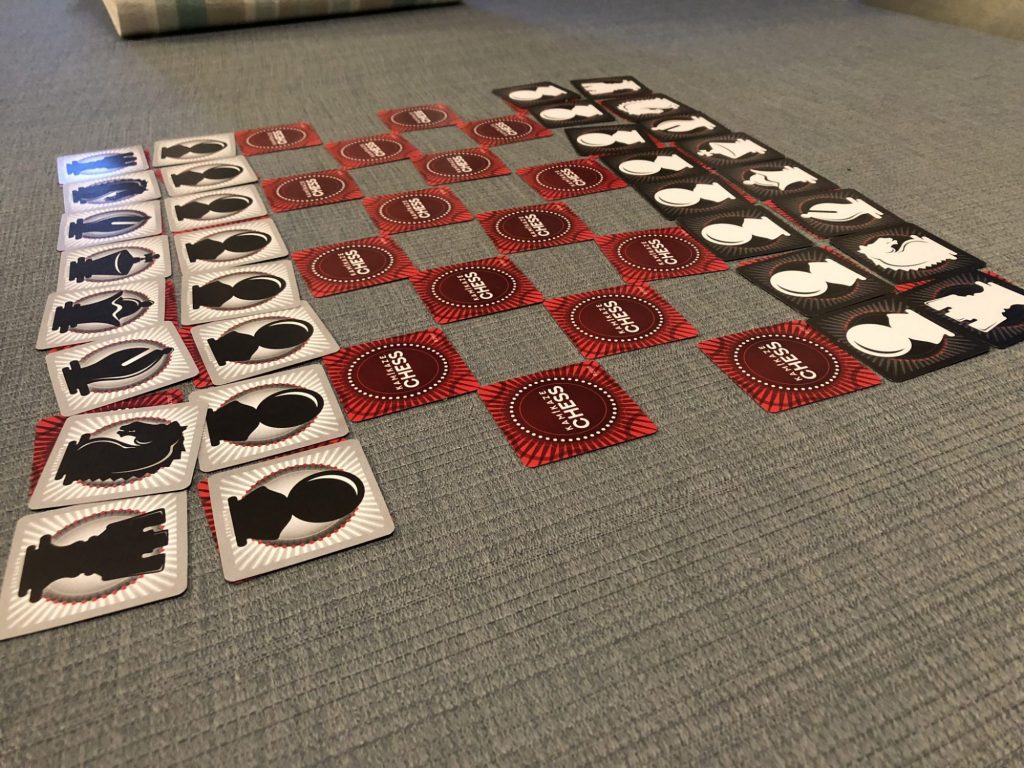 For both game modes, traditional Chess is played – each piece moving like they do in a regular game of Chess with the same win condition.

During my playthroughs of this game I was surprised my husband didn’t flip the table. He enjoys playing Chess for its strategy and tactics. He is an extremely smart person – doctorate in mechanical engineering smart – so he can think three or four plays ahead, making him an excellent Chess player. He’s no Bobby Fischer, but he is still pretty good. When we played with the Kamikaze cards he became so frustrated because he would set up the board how he wanted, land on a card, and then have to immediately kill the piece that landed on it (Sudden Death) or move that piece again (Attack or Knight Raid). This completely threw off his strategy. In one of our plays, I landed on a Kamikaze card in my 2nd turn and it was the Kamikaze action, so I took out his Queen. He actually got to the point where he would strategically play so that his pieces would not land on Kamikaze cards or try to avoid them as much as possible. You could actually hear him groan as he moved a piece onto a card, and then watch him cringe as he flipped the card over only to have it reveal Sudden Death and remove that piece from the game. 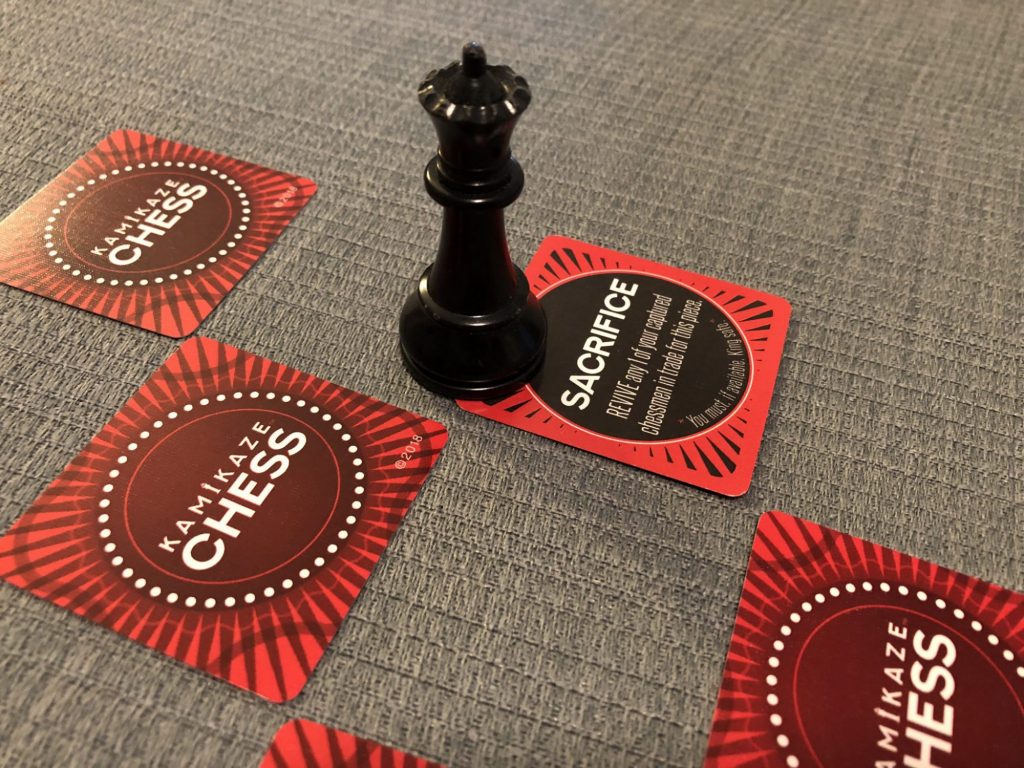 As I mentioned before, my husband is extremely smart so more often than not I lose whenever we play a game together. I tend to just play one turn at a time so Chess is just not my type of game; however, when we played with the Kamikaze Chess cards I felt like I had a chance. In Chess you have to think three or four steps ahead in order to do well, but with these cards your plans will be completely thwarted. If you land on a card you could immediately kill that piece (Sudden Death), swap it with any other piece on the board (Trade), or even kill any other piece on the board (Kamikaze).

I liked the Kamikaze variant better than the Traditional. My husband also liked it better that way as well, but to him at that point it wasn’t Chess. Yes, your pieces move in the same way, but you weren’t the one setting up the board in your favor. You just deal with how it is laid out.

I’ll be honest and tell you that I when I sat down to play Kamikaze Chess I was of the mindset that I was going to play Chess but with a slight twist. I still thought I was going to have to think strategically through each move and try and outsmart my opponent; however, I ended up having to play more reactionary. People who are not as keen on Chess may like that change to the game. 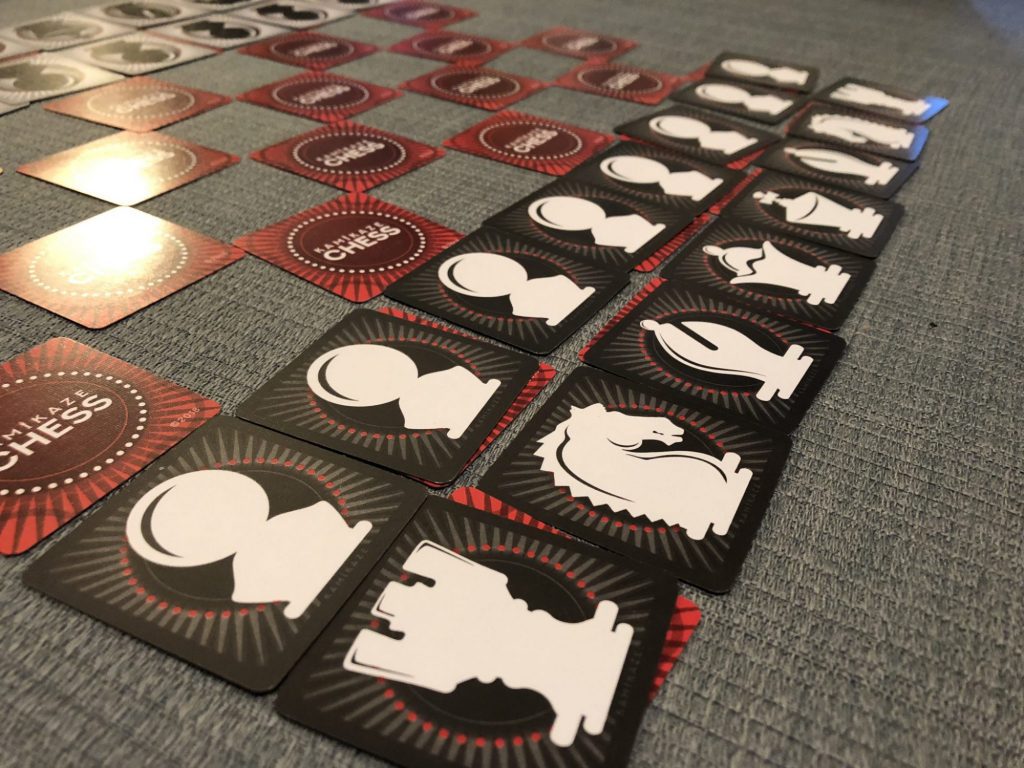 Games are quick, especially the Kamikaze variant. Based on how the cards are laid out you will have to take out a few Pawns, and you may even have ways to take out more than one of your opponent’s pieces within the first few turns. Then, add in the different cards such as Sudden Death or Kamikaze and pieces will be taken off the board much more quickly making the game length short.

Another positive is that the box is small enough that it can easily fit in your pocket or purse. Want a portable game of regular Chess? The box also includes a full set of Chess piece cards so you can play regular Chess anywhere you want! The other side of the Kamikaze cards have a circular image so you could even use it as a portable checkers game too.

One thing that is not a positive is the rules. They fit on a card the size of the other Kamikaze cards which are small so the font was hard to read. Also, some of the wording was a bit unclear specifically “remove any Pawns from end lines” which happens during setup of the Kamikaze variant. We weren’t sure what they meant by that so we played it as any of the edges of the Chess board.

I believe that people who are avid Chess players will not be a fan of this. They will want to play regular Chess and not like the changes these cards introduce; however, can we truly call this Chess? The pieces move the same as they do in regular Chess and the goal is the same, but it is a different game. Chess is played strategically with all the information given to you from the start, but with Kamikaze Chess you react more instead of strategize and deal with unknowns. 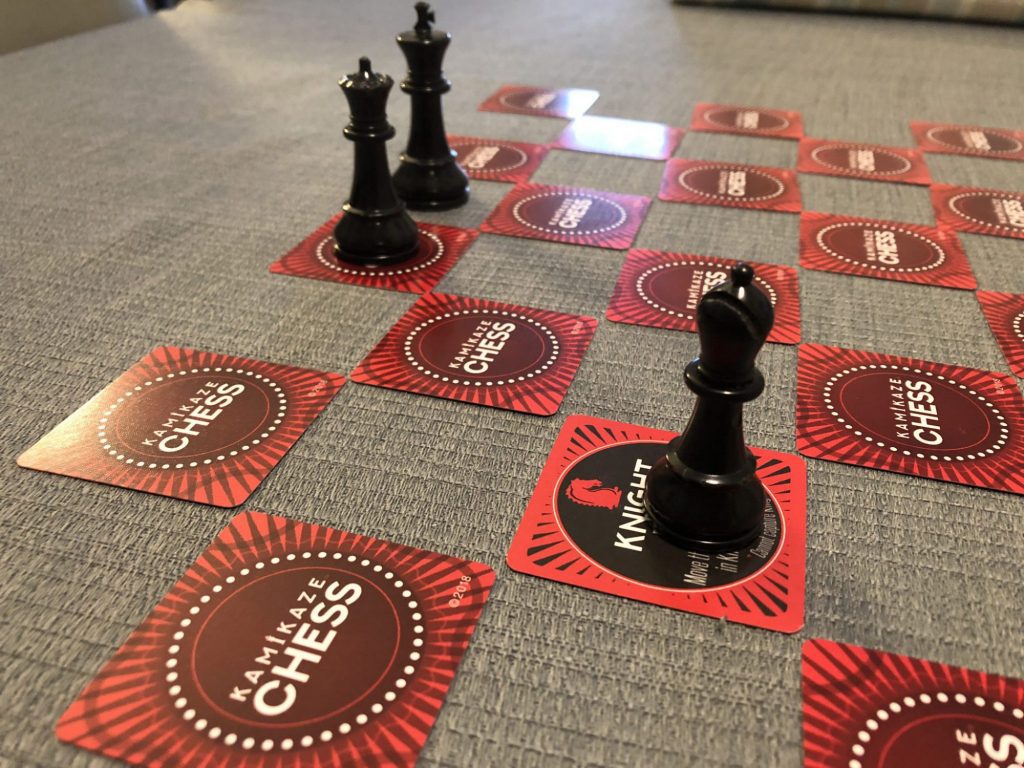 If you’re expecting Chess, then Kamikaze Chess might not be for you. However, if you’re a fan of random setups, tactical gameplay, and the unknown element then Kamikaze Chess might be perfect for you. Chess rules still apply but adding in the cards does gives it an appealing twist. It has a low price point ($8 on Amazon), so if my description sounds interesting you could check it out yourself.

Personally, I think I’ll stick with Chess the way it has been for centuries.