Good Dog, Bad Zombie is a dog-loving coop party game designed and published by Make Big Things. One to four players choose different dogs and attempt to save the “hoomans” of their beloved city after a zombie apocalypse. I put it in the same family of games that I’ll call ticking time bomb games. These games have a mechanism of play which pushes the game to a loss via small steps which should be countered throughout play.

Pandemic is one of the first games I experienced with a ticking time bomb. In Pandemic, players must draw from an infection deck each turn. This causes infections to spread slowly, but interspersed among the deck are 5-6 epidemic cards which cause the infections to ramp up. Players must balance dealing with the infection directly and researching cures in order to win. Another more complicated game of this nature is Dawn of Peacemakers.

In Good Dog, Bad Zombie, the ticking mechanism is the spread of zombies on the board. The game ends in defeat when zombies have successfully attacked 10 times, which causes the dogs to go feral. In other words, the dogs forget what it’s like to be pets. The dogs win when they rescue enough hoomans to take to a new town to preserve their domesticated way of life. 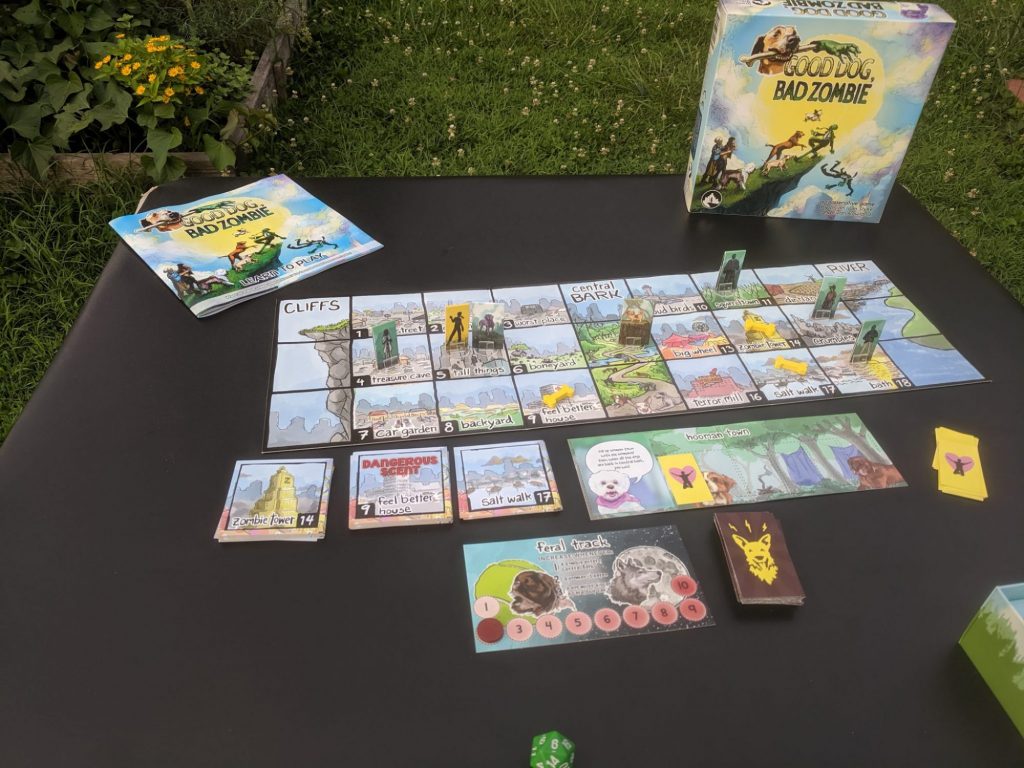 To win Good Dog, Bad Zombie the brave dogs must rescue enough hoomans to fill up Hooman Town and then return to Central Bark. Dogs lose when they go feral, which is represented by a tracker on the feral track board.

There’s a City board which contains Central Bark in the middle, a cliff and a river on either end, and 18 different places with names like “bath” for the ocean and “feel better house” for the hooman hospital. A chart with different difficulty levels details where starting zombies are placed.

All dogs begin in Central Bark, each with two energy cards from the 64 card energy deck. Players also receive a dog reference sheet specific to their chosen dog. Dogs also have their own special “Good Doggo” special power with a list of actions they can take with the play of a “Good Doggo” card from the energy card deck. 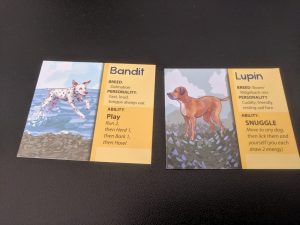 A couple of the dogs you can play as. 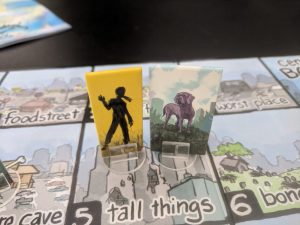 Finally a 54 card scent deck with names of the various places is shuffled and divided into three stacks. A bone shaped scent marker is placed on the board for each of the three stacks, doubling up if necessary. 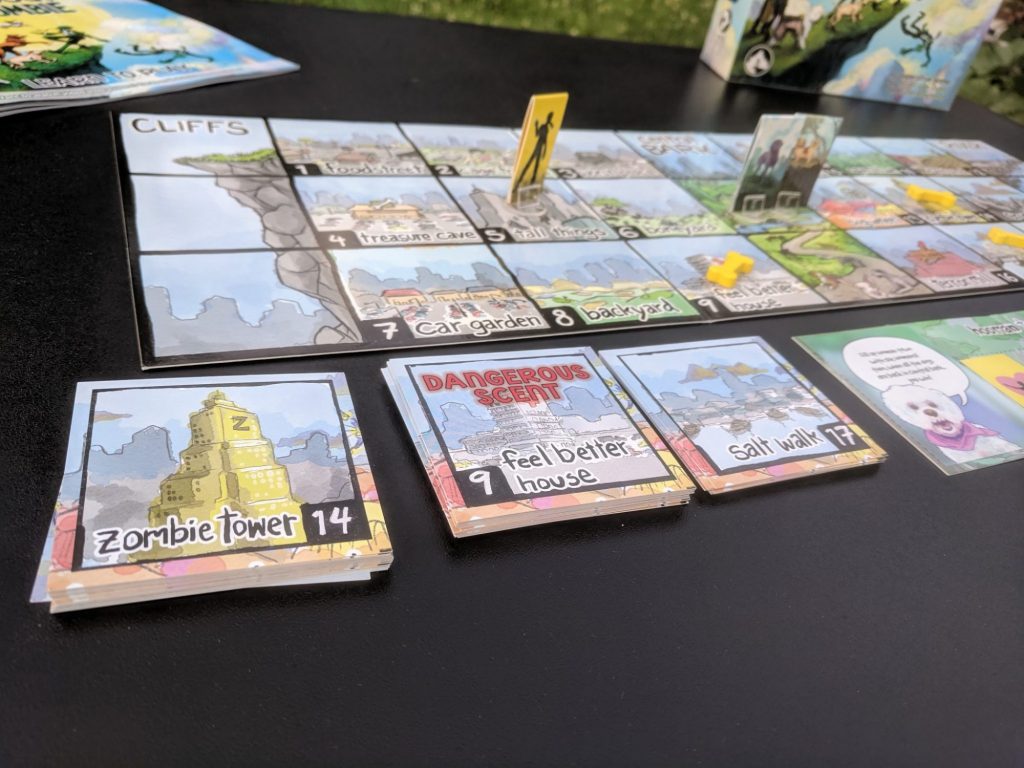 Scent cards for the various places on the board.

Each phase of a dog’s turn consists of two steps: taking two actions and rolling around on the floor the 20 sided zombie die.

For the first step, a dog may take any combination of four possible actions: 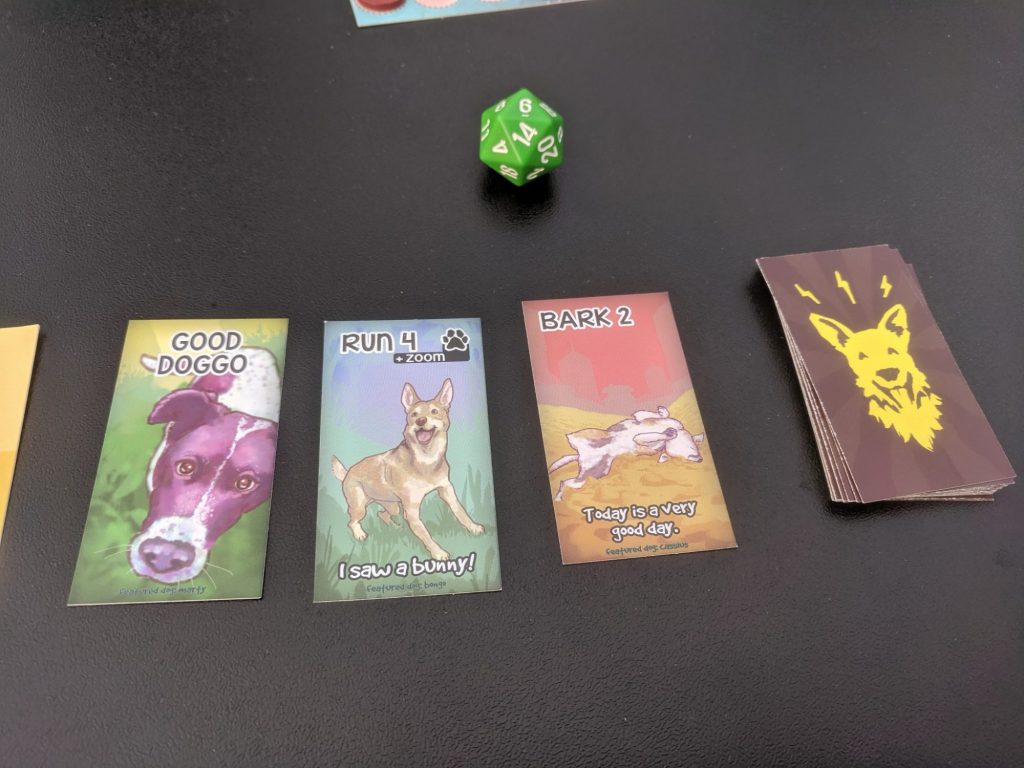 Energy cards, the last card shows the back. Also pictured, the zombie die.

On the second step the 20 sided zombie die is rolled. A new zombie is placed on the corresponding numbered place on the board. Zombies cannot share spaces, so existing zombies are bumped closer to Central Bark. Whenever a zombie enters Central Bark, the feral track is moved up one due to the startling nature of its entrance and the zombie is removed from the board because the dogs of Central Bark eat them. Zombies that share a space with a hooman immediately eat the hooman (regardless of dog presence) and move the feral track up one as well. Finally, a dog that is startled by a placed or bumped zombie must discard two energy cards and return to Central Bark. For each energy card the dog does not have to discard, go up one on the feral track.

Good Dog, Bad Zombie’s execution of its theme is really well done. If you love dogs and dog puns, you’ll love seeing how dogs might view a zombie infested world. While zombie apocalypses are typically bleak, the dogs keep this game feeling cute and “hoomorous.” If dogs or zombies don’t interest you, you might be better served by Pandemic.

The zombie theme is also light enough to be appropriate for most kids. There’s no violence shown in the game and the zombies are not particularly scary in appearance. Though the box indicates 13 and up, my eight and eleven year old both understood and played the game well enough. Parents, especially cat loving parents, looking for a zombie game designed with kids in mind may prefer Zombie Kidz.

Zombies! Dog’s worst nightmare and greatest treat side by side?

The mechanics are pretty easy to remember due to the theming. This is not a heavy game, and as a result it’s fairly easy to pick up. Unfortunately some of the things that keep it light also lessen the fun. Using a die to advance the zombies makes it too random. Zombies can easily pile up quickly despite all the best decisions made throughout the game.

I also found myself dependent on luck with drawing from the energy card deck. One might have a great plan but can’t execute it because of a poorly drawn hand. It’s really hard to plan more than the turn you are on as a result and I like to plan 3 moves in advance. However, there are multiple difficulty levels, so you can always knock it down a level until you’re having fun again.

Despite any of those flaws, Good Dog, Bad Zombie is simple and fun enough to pull out for your furry friends’ Halloween party without being too distracting from conversation.