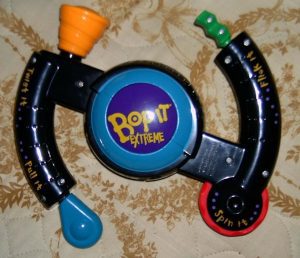 This is the version of Bop It that I prefer (…not the current one with “Selfie It” as a command).

No, no, our review has nothing to do with Bop It Extreme. In Drop It, you will simply drop it, as the title suggests.

The object of the game Drop It is to, well, drop your coloured pieces in the drop zone to score points. This sounds deceptively simple and whenever I teach the game, I am met with many “are you for real?” and “that’s it?” looks. After a few turns, the players always seem to take back their initial judgement as they discover just how complex Drop It can be (this is usually after they mess up a turn and score no points).

In Drop It, players will take turns going around the table and dropping one of their coloured shapes into the drop zone, hoping to score points. 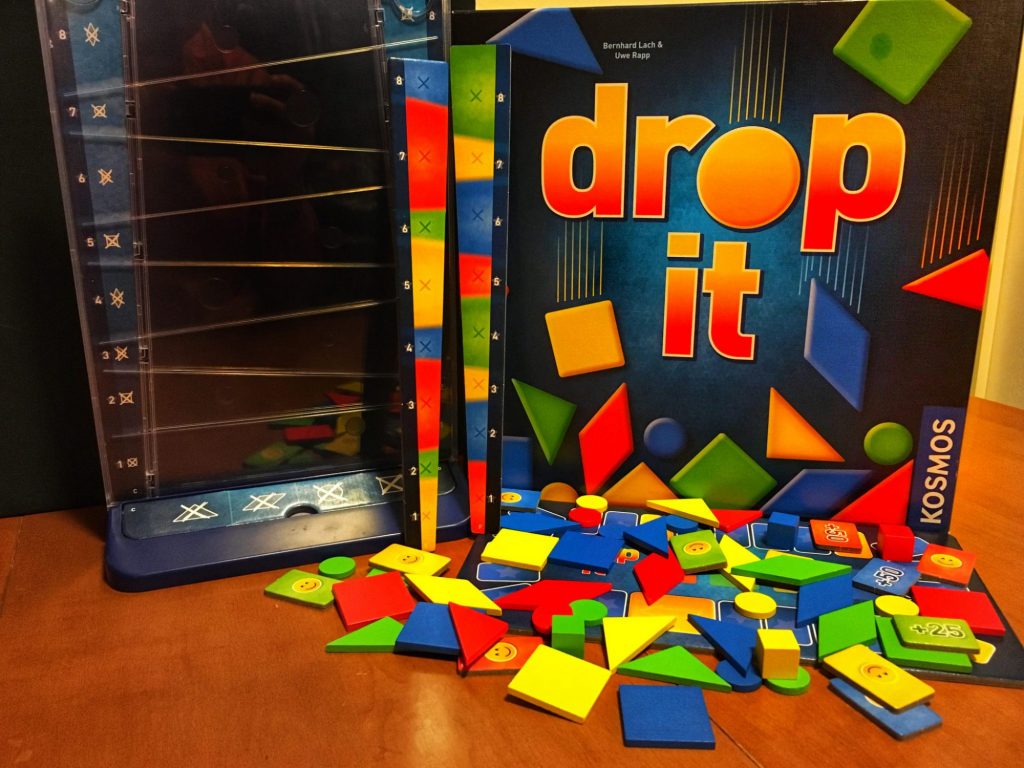 The Drop Zone is pictured on the left.

A player’s shapes include circles, squares, rhombi (diamonds), and triangles. All coloured shapes are used in a game no matter the number of players, so with fewer than four, players will have two different colours to work with.

On your turn, choose any one of your shapes to drop. If you don’t break any landing rules (more on that later) then you score points based on the highest level your shape reached. This is known as its final resting position. 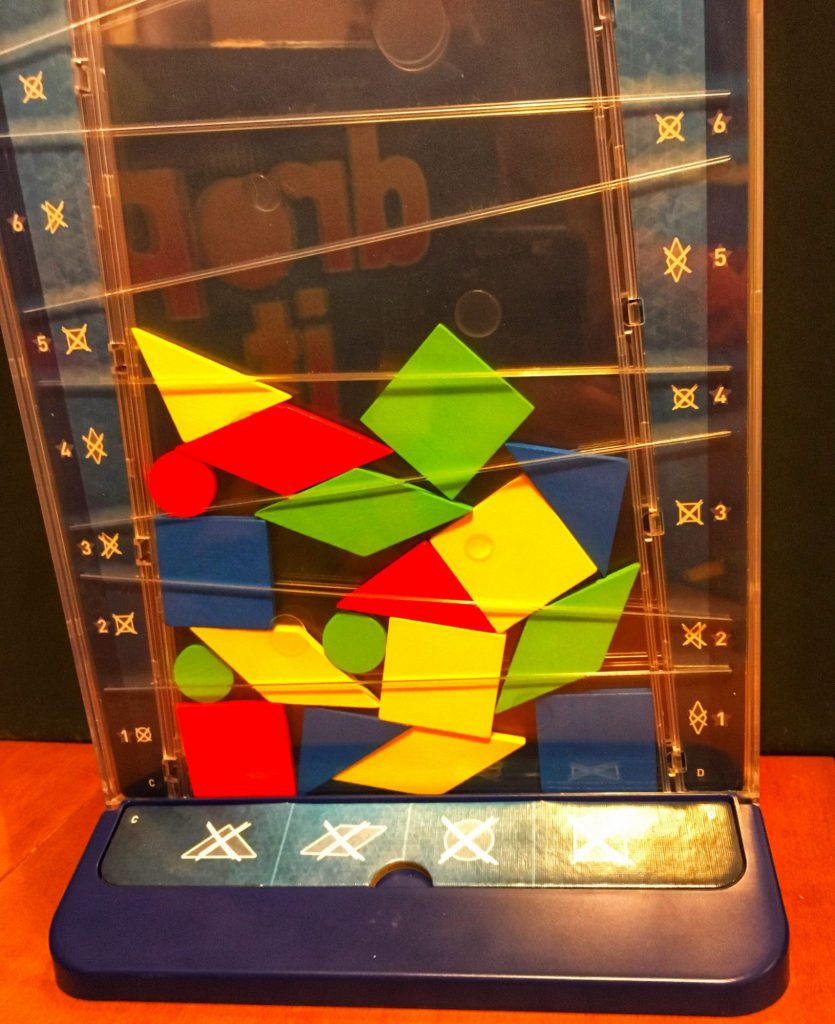 For example, if your yellow triangle lands above the “5” line, you score 5 points. Simple. Once you’ve scored your points, you will never lose them, even if another player’s piece jostles your shape, causing it to break a landing rule. Also, if your piece is covering any bubbles, you’ll score extra points.

To score points, you cannot break any of the following landing rules:

If your shape’s final resting position breaks one or more of these landing rules, then you score no points for the turn. 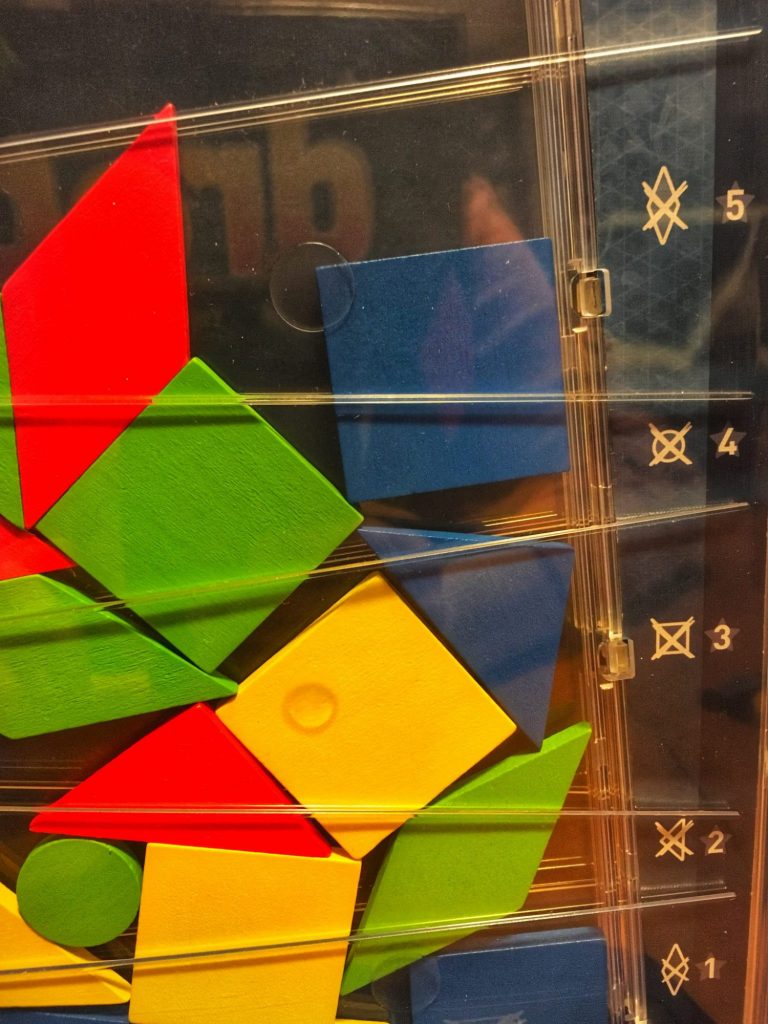 The blue square will score no points because it breaks Landing Rule #1 (your shape cannot touch the same shape, even a teensy bit).

Following the landing rules is easy at first. However, as the coloured shapes rise and fill the drop zone, so does the stress and tension. Regularly, you will find that there may only be a single shape you can drop on your turn and that it must land in a very precise way to score you points. All too often a turn in Drop It comes down to trying to carefully drop and balance your shape in seemingly impossible positions. 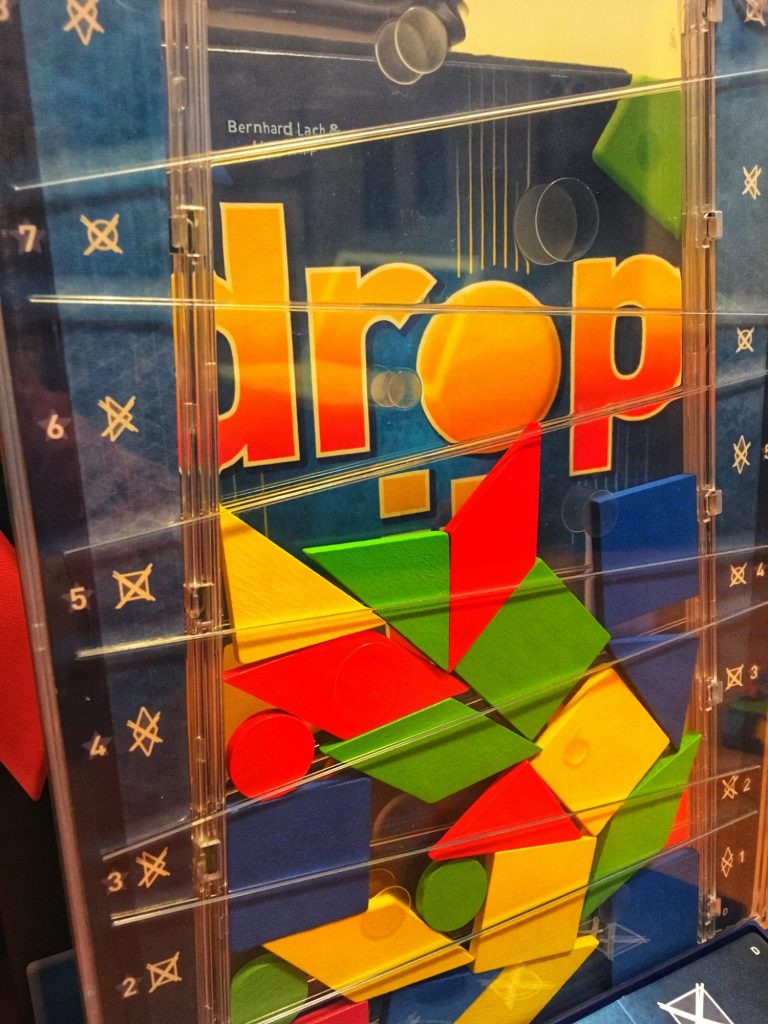 Each scoring level has a bubble.

If you have a copy of Drop It from its first print run like I do, you will notice differently sized, opaque bubbles on the drop zone. If you have the newer version, your bubbles will also have numbers on them. The bubbles (bonus circles) will award points if one or more of them are covering part of your shape. The points you score are based on their size: 1 point for large, 2 points for medium, and 3 points for small.

For Beginners: you can ignore the 3rd restriction (the landing rules for the bottom and side edges). To simplify your game in this way, don’t use the base pieces and only use the two side pieces to help with scoring points for each level.

Jokers: The joker tokens allow players to break any (or all) of the landing rules and still score points. Each player receives 2 tokens at the start of the game and can choose to turn one in to score points for a drop that would have otherwise scored them no points. Each unused joker token is worth 3 points at the end of the game. 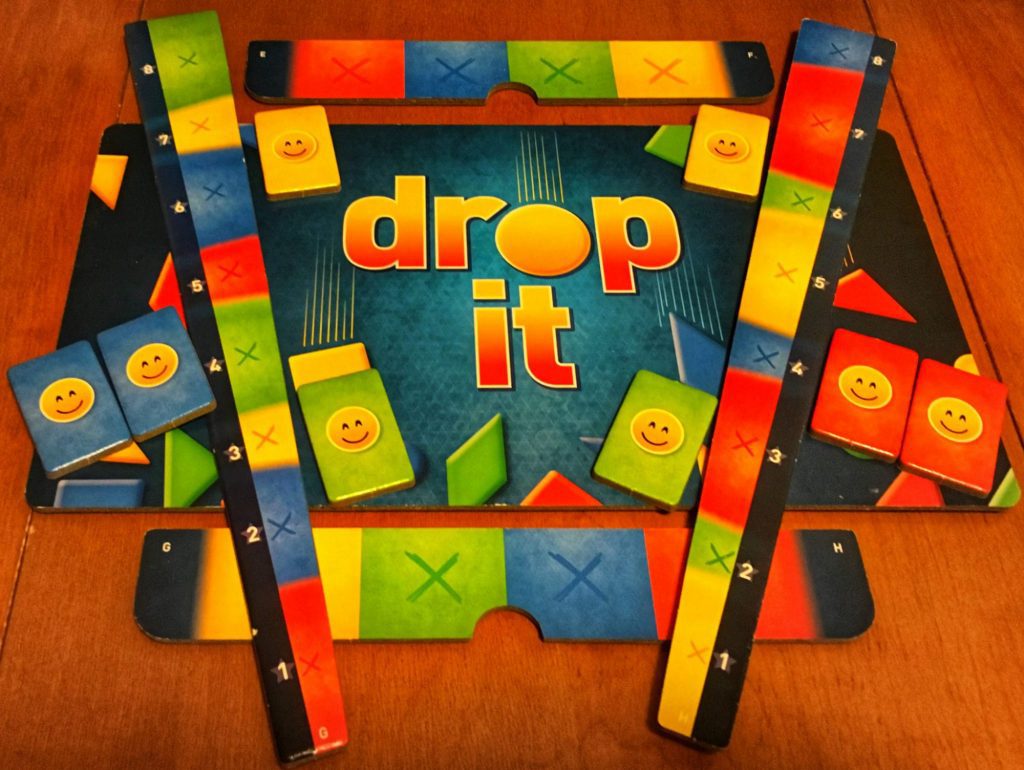 These pieces are used for the Joker and Colour Restriction variants.

Colour Restrictions: The standard game uses shape restrictions along the side and bottom edges, but it is possible to change the rules so that there are colour restrictions instead by simply swapping the shape side and base pieces for the colour ones.

Team: The team game works the same as the base game with members of each team always alternating turns. Similar to the base game, any of the above variants can also be applied with the Team variant.

Despite its juvenile look with its bright, primary coloured shapes (and green), Drop It is a blast. I have taught this game to a number of people, ranging from heavy strategy to casual gamers and from young children to my older grandparents. Whenever I bring it out, one of two things happens: I’ll get a look of serious judgement (often from at least one modern gamer) or I’ll get a look of awe and excitement along with a comment about how they’re reminded of Connect 4. Whatever their opinion going in, everyone has always left their first game of Drop It pleased, having had a good time, and wanting to play again.

Like many good dexterity games, Drop It has a stunning and intriguing table presence. Recently I introduced this game at a local convention and at a board game event which I co-run— and it was all anyone talked about. People couldn’t resist gathering around the table and watching people play.

When you’re playing Drop It, you can expect the table to erupt in cheers when a player lands a ludicrous drop and scores a ton of points. I remember during my first play, my opponent managed to drop his circle to balance on my triangle’s edge and I was so amazed that I gripped the table and jumped up in excitement. Of course, that disrupted our steady drop zone and his circle fell to the Drop It depths below before he had scored his points. Oops.

For me, playing a game of Drop It is like a warm chocolate chip cookie: one is never enough. Each game is so invigorating and finishes so quickly that I always play at least two games back-to-back. Drop It may not have received such high praise as other 2018 releases like Root, Teotihuacan, and Ganz Schön Clever, but for my money, this is one of the best games of the year.