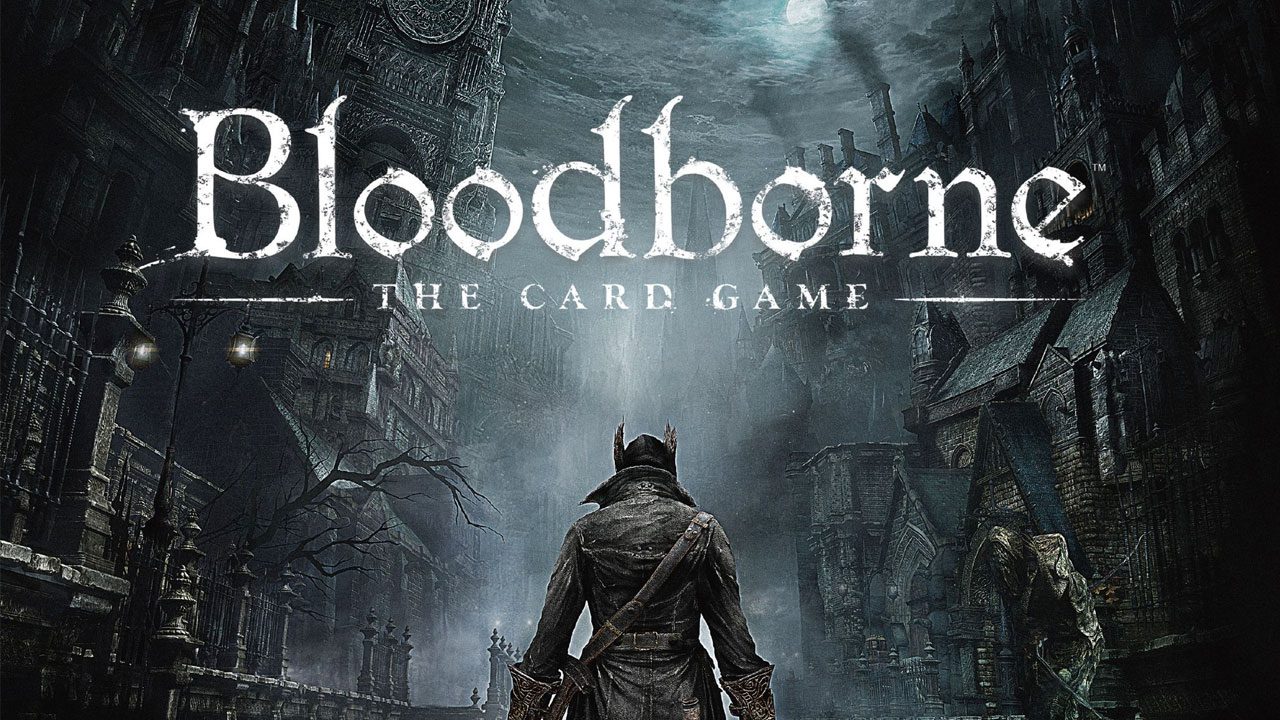 I don’t know much about Bloodborne the video game.  Never played it, but I did play the developer’s previous game Dark Souls.  For those outside the circle, Bloodborne is an action RPG video game with a heavy emphasis on high difficulty.  It is a game that punishes you severely for not understanding its mechanics or patterns. Bloodborne and many other games like it are so difficult that there is some controversy surrounding them for “gatekeeping” content which, to be honest, is quite a silly thing to argue about.  With that type of pedigree, it’s weird to see this video game adapted into a semi-cooperative card game.

You and several hunters are trapped in the Chalice Dungeon.  You must fight monsters and grab equipment together, but only one of you will be able to escape.   Each game will have a set of ten random Chalice Dungeon cards, with three of those cards being Bosses.  A random Final Boss will be used which serves as the game’s climax point and will have a special effect that impacts everyone at the table.  Once you go through the dungeon and beat the final boss, the hunter with the most points via blood echoes and trophies will escape.

Frenemies At The Bay

Everyone will be dealt with the same five starting cards and a row of Upgrade cards will be displayed face up to show the goods to the players.  The starting hand consists of three weapons, one Transform card, and a Hunter’s Dream card. Hopefully, I don’t have to explain what weapons do in a game about killing monsters.  The Transform card allows you to react to other player’s cards and Hunter’s Dream allows you back out of a fight to fully heal yourself and take a card from the Upgrade Deck to improve your hand.

Going through a single round is straightforward as the game’s theme.  You reveal the top card of the Chalice Dungeon deck to reveal the monster your band is facing.  It’s going to tell you it’s health, what abilities it has, what trophies it gives, and how hard it can potentially hit via a colored die.  Everyone will pick one of their cards and put it face down in front of them. Once everyone has done this, cards are revealed. Any cards revealed with Instant effects are executed in turn order.

After the Instant effects, players who played Transform cards will now be able to play a Weapon card of their choice in reaction to what everyone else has played.  The monster then attacks by rolling a die, everyone takes damage, then anyone who has played a weapon card will deal damage to it in turn order, taking Blood Echoes and adding it to their pile.  Afterward, any surviving players who played Hunter’s Dream will heal up, put their discard cards in their hand, and take a card from the face-up Upgrade cards.

That’s the core concept game in three paragraphs.  If there is one thing Bloodborne has going, it is an intuitive game with a straightforward ruleset.  Since everyone has the same hand at the start of the game, even new players can easily determine the perceived value of any card from the Upgrade deck because they just have to compare it to their starting hand.  In terms of player scaling, everyone plays their card at the same time meaning five-player games do not slow down the brisk pace.

Control The Decisions, Suffer The Chaos

What makes this game such an interesting enigma is the various mechanics you have to wrestle with.  The ruleset might be easy but figuring the right solution might not always be obvious. Each monster has a specific number of health points and since the damage is done in turn order, being last might mean the monster might die before it gets to you, right?  No, not exactly, since you might have a player in front of you that decides to play Hunter’s Dream because they want a certain upgrade card, their health is low, their hand size is small, or they are just being a dick. That’s one problem right there.

Another problem is risk management.  Each monster will roll a damage die: Green, Yellow, or Red.  As you probably guessed, Red is the worst die for everyone and Green isn’t much of a threat.  However, there is one mechanic that flips this simple concept over its head. Every die has one side with a burst symbol.  If that burst symbol is rolled, you apply the damage and roll again. What happens if you roll the burst again? You roll again since there are no limits.  This means it is very possible that a puny green die can take out a full eight health hunter. In a lesser game, this would be frustrating but it works here since you are given enough information to make that decision thus any failure is your fault.  You knew the odds.

There are three different types of trophies.  When you damage a monster on the turn that it dies, you gain the trophy associated with the monster.  You move up on the trophy track and it will give you victory points at the end of the game. The further down the track, the more points you earn.  In layman’s terms, it’s a set collection mechanic. The catch is that when the players fail to defeat a monster, it runs away unless it is a boss, therefore players must try to read each other’s intentions and collaborate to earn trophies.

This symphony of mechanics manages to produce a tune that I haven’t heard in board games before.  You have drafting that allows you to build your hand as the game progresses at the cost of potentially scoring blood echoes and trophies.  The cards you draft can have various abilities such as healing yourself, damaging other players, or damaging the monster before it attacks.  You need to pay attention to the cards other players have drafted since the tools available to them will influence their actions and tactics.  Simultaneous card play introduces the concepts of negotiation and bluffing into the mix. The risk management of dice rolls, health points, and monster abilities is a nice touch up to all the other features of this game.  With all these mechanics tied together, it sounds solid, so why does nobody talk about this one?

Poor execution.  The game has a drab color palette with mostly black covering everything and the “artwork” are 3D model renders from the video game slapped onto the card.  Outside the visuals, the content is severely lacking. The upgrade deck is only 32 cards and it is small enough to see the entire game within a game or two.  In about two or three games, you experienced everything Bloodborne can offer.

There are only five bosses and three of them are poorly designed.  You have a boss that introduces player elimination, another one that will heal you every round thus reducing the difficulty, and one that keeps adding cards to the dungeon deck making the 45-minute game into a potential hour and a half.

If the story ended there, I would’ve closed this review off by saying it was a game with good intentions but bad content and call it day.  I can’t though because we have to discuss the Hunter’s Nightmare expansion.

Yes, You Will Spend More

I usually detest the term “essential expansion” but I can’t think of a better description of it.  Unlike most board game expansions, this one is priced quite reasonable at a mere $10 in most online stores.  It doubles the amount of content, such as monsters and final bosses, while introducing Death Tokens and Runes.

In the base game, dying merely meant losing your unbanked blood echoes.  With the introduction of Death Tokens, the punishment for dying is far more permanent.  At the end of each Trophy track is a Death token and when you die, this death token moves forward one space.  The Death Token is blocking that space on the track and putting a cap on how much you can score. If you die again, it goes forward one space.  It will even push a Trophy token back one space if you are already maxed out. A simple mechanic that rewards players screwing each other and punishes poor risk management.  I love it.

My feelings towards the Runes are the complete opposite.  Rune cards give everyone a special power such as the killing blow gives you an extra trophy or you always bank half your blood echoes when you attack.  In theory, this sounds great but most of the powers railroad your decision making. A Rune giving you a bonus whenever you use a Range weapon means you will always be going to grab a Range weapon card.  Instead of a blank canvas state in the base game and upgrading your hand as part of the journey, Rune cards destroy this attractive feature and downplay the game’s difficulty. As for balance, let’s just say there are certain combinations of Rune cards and upgrade cards that can easily kill off “hard bosses” in one round without any tough decisions to make.

Bloodborne the Card Game is a product of ill-fated circumstances.  This game had the right ideas but didn’t have the meaty content to flex its strengths.  The Hunter’s Nightmare expansion was released two years after the base game, which is beyond the game’s peak interest.  It’s unfortunate since the expansion gives the substance Bloodborne needed for a complete experience. This almost feels like the perfect lightweight game that offers tough choices, sensible rules, tons of variety, and works well with any player count.  To put it mildly, this is a highly underrated game that deserves more attention. 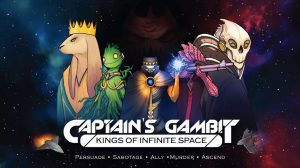 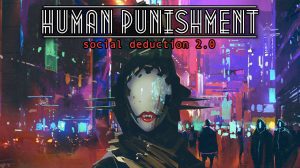 In this review, we look at a game that announces it is the best social deduction game. It's not. 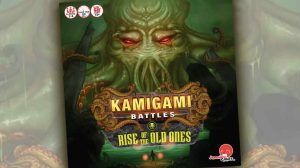 Kamigami Battles: Rise of the Old Ones Game Review

Kamigami Battles is a combat deckbuilder and this is the third attempt to make it work. Did it? Yes. Read our review to find out why. 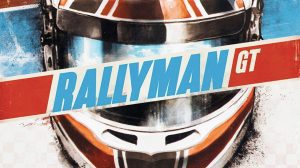 Rallyman GT is an interesting diversion that severely punishes players a bit too hard.