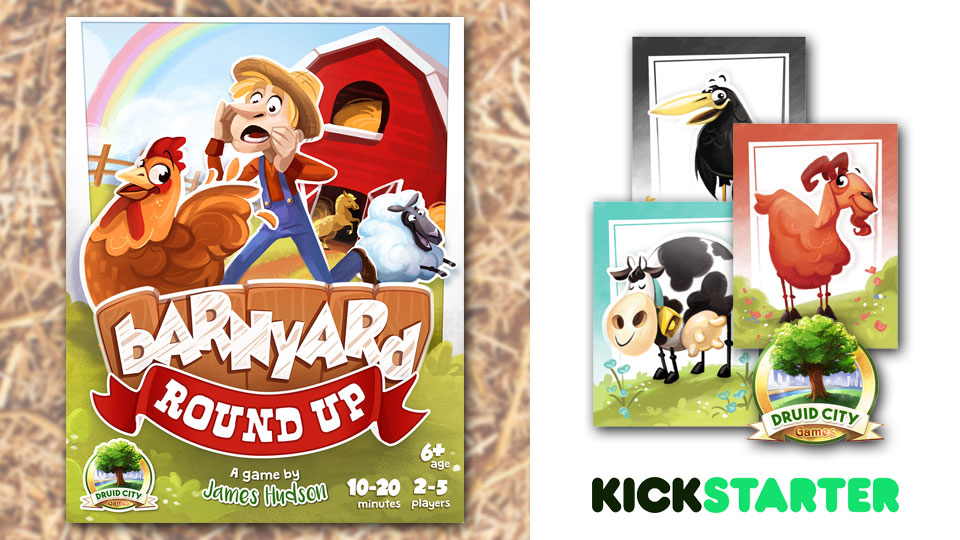 Barnyard Roundup is a fun bluffing and set collection game for 2-6 players set squarely in the most dishonest farm you’ve ever seen. In Barnyard Roundup players attempt to gain the most points by successfully convincing other players of their honesty, trustworthiness, and the complete absence of Crows in the cards they’re giving to you. What’s this about Crows? Let’s find out! 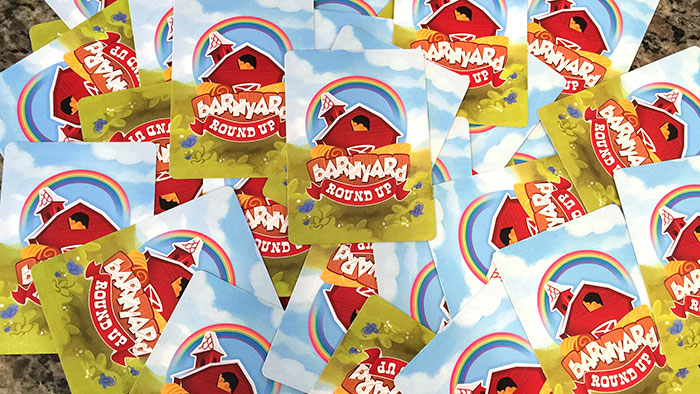 How to Set Up Barnyard Roundup

The main deck for Barnyard Roundup consists of 6 different animals, each with 15 identical cards: chickens, goats, sheep, pigs, cows, and the pesky crows. There are also bonus cards for each animal (not counting crows), and a number of set bonus cards all of which are used for end of game scoring. Set the bonus cards aside, shuffle the animals into one deck of cards, then deal 5 cards to each player.

How to Play Barnyard Roundup

On a player’s turn they’ll select any number of the same type of card (1 goat, 2 chickens, 4 cows, etc.) and offer them to any other player. What they choose to present those cards as is their choice. For example, select 2 pigs from your hand and say “Noelle, here are two cows”. Noelle now has a choice; she can say “I believe those are two cows”, or she can say “I don’t think those are two cows”. Regardless of her answer if Noelle is right, then she lays the cards down on the table in front of her. If Noelle is wrong, the player who gave her the cards will lay them down in front of themself. The current player would then draw back up to their hand limit of 5 cards and the turn would move to the next player.

No matter which cards, or how many, you select they must all be the same animal.

Players will receive face value points for animals on the table in front of them at the end of the game. Each animal has its own point value: 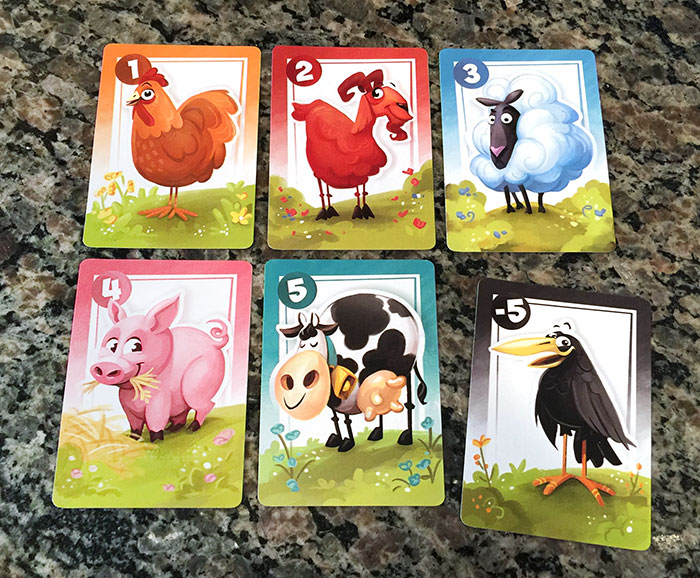 Barnyard Roundup also includes 3 types of tokens which provide special abilities to the players. These tokens are:

After using a token, draw a new one from the pile.

Play continues until the last card is drawn from the deck. Once this happens, the game is over immediately. Any crows in your hand will be added to your scoring pile, with all other animals being discarded. Add up the face value of each animal. Subtract points for each crow you have. The player with these cards at the end of the game would score 22 points. 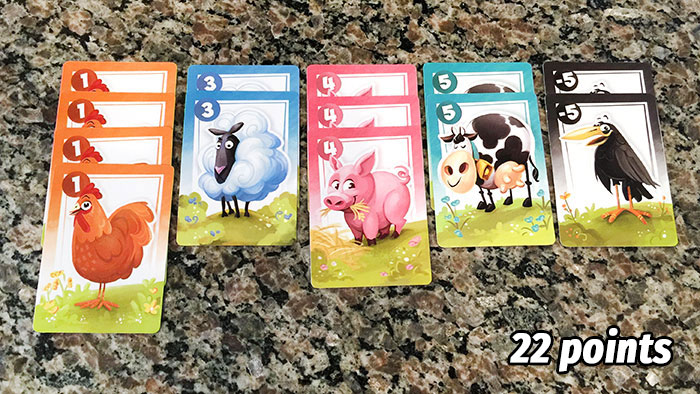 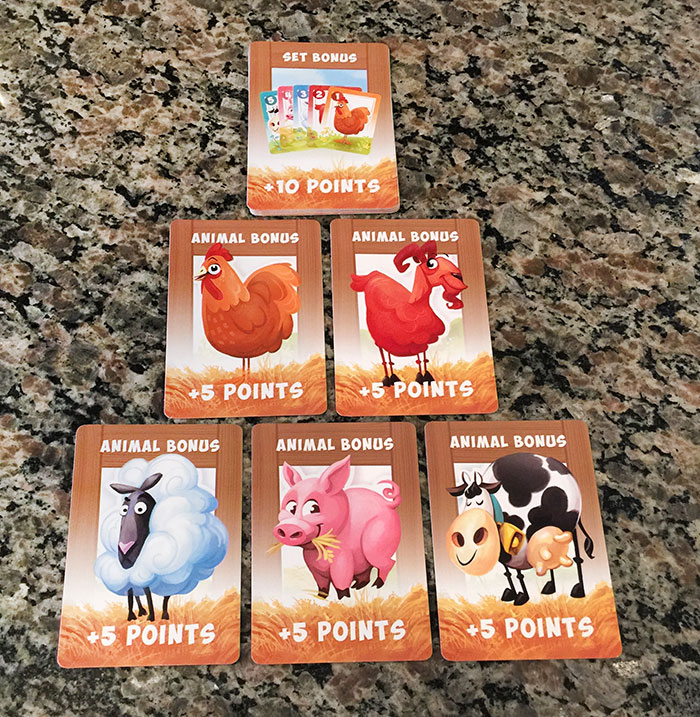 The player with the highest number of points wins the game, and the honor of being the Baron of the Barnyard, the Count of the Corral, the Lord of the Lawn.

The art in Barnyard Roundup is simply delightful. The illustrations are fun, colorful, and make you laugh by looking at them. The game is fun to play, and a great way to get into your friend’s heads. I played a game with a husband and wife who refused to bluff to each other because they knew each other’s tells so well.

You’ll think you know FOR SURE that someone is lying, but flip those cards over and watch them laugh as they collect 4 cows worth 20 points. On the other hand you might think someone is being straight with you only to have them bust out laughing because they gave you two crows (-10 points).

Barnyard Roundup is a great way to introduce kids to bluffing games without needing to introduce them to B.S. (Daddy why is this game called B.S.?). It’s simple to teach, quick to play, and lets you get out your lying streak in a harmless way.

The rulebook is well written and offers a number of examples to make sure the bluffing rules are explained properly.

What I Dislike About Barnyard Roundup

In Barnyard Roundup you get to pick who you play to. This can result in some players not being as involved in the game as they could be. The Excuse Me token does address this to some degree, but if a player chooses not to play the token they might end up feeling somewhat left out. Introducing a variant where players simply play to the person on their left would be simple, and would make sure everyone feels involved.

My 10yo daughter was looking at the cards after our first game and noticed a few oddities about the illustrations. The goat body looks a bit like a chicken. It’s not a big deal but once she mentioned it I couldn’t unsee it.

Also the cow’s feet are firmly planted on the ground, but the udder and the cowbell appear to be protruding straight out to the side. This looks quite odd.

The crow cards are a huge detriment, being -5 points for each one. I’ve played entire games where I didn’t draw the single Scarecrow, or drew it on my turn but didn’t get to play it because the deck ran out. It could be fun to offer a variant where the play with the most Crow cards gets positive points, or perhaps introduce one other Scarecrow token?

I’ve played Barnyard Roundup with a good mix of kids and adults, along with multiple player counts and this game delivers the fun. I was hesitant about playing with my 5 and 7 year olds, mostly because I didn’t think they’d do well when being asked to bluff. But I was pleasantly surprised how well they did. My 5yo son has asked to play even more times than we’ve actually gotten to.

The adults had just as much fun as the kids; perhaps even more because they understand the strategy behind it, and the idea behind bluffing, double bluffing, and super-secret triple bluffing.

If quick bluffing games are your thing, then definitely consider backing Barnyard Roundup.

What do you think about Barnyard Roundup? Give us your opinions about what you like and/or dislike about the game in the comments below!