Arkon Review – Keep Your Hand Close and Your Enemies Closer

The lore is rich in the card game of Arkon. The development team has created a lot of lore and background for the game. There are four Clans which have been fractured out in the Wildlands; Orcs, Dwarves, Elves, and Humans. You are a ‘mysterious outsider,’ an Arkon, who has come to fight for control of these Clans. You do this by using your cards in multiple ways. Every card has Influence that can be used to Bid on Clans. There are also Action cards that are played during your turn and Response and Counter cards that are played outside of your normal turn.

Each player begins the game with a starting hand of 5 cards. On your turn you can play as many action cards as you want; things like stealing, drawing, trading, or making opponents discard. Then you may place a Clan card from your hand up for Bidding. Each player secretly chooses how many Influence points, the number is found at the top of each card, they want to bid, and the winner receives the Clan and discards any cards they Bid with. Afterwards, you may continue playing any action cards you want. At the end of your turn, if you put a Clan card up for Bid, you draw a card. Then every player draws a card, starting with you. Which means putting a Clan up for Bid gives you a slight card advantage. The winner is the first to recruit four of a kind of one Clan or at least one card from each Clan. I won’t go into more detailed instructions of the game in this review but you can find them here. 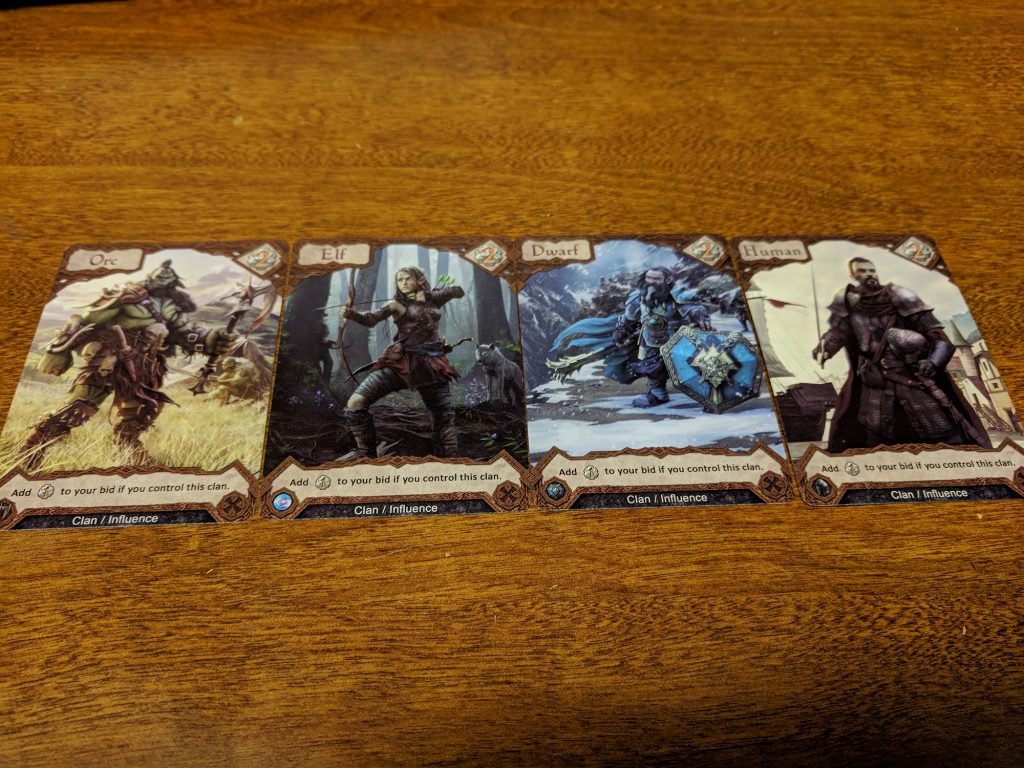 Arkon is fun to play and the rules are easy to learn. It’s a simple mechanic; play the cards in your hand to recruit Clan cards to your side. When an Action card is played your opponents have the opportunity to either stop it from happening or sneak in and gain an advantage during that Action. There ends up being a lot of back and forth between players and things get pretty intense as other players Counter or Respond to cards played.

The rules allow you to play as many cards as you want during your turn and sometimes out of turn. While drawing cards happens often you will never draw an abundance of cards. During play you have to be sure you balance your hand size to take part in the Bids and Actions, otherwise you’re stuck doing nothing. There are few opportunities to fill your hand with cards, so it doesn’t feel like one player can easily gain an advantage. However, it’s easy to be tempted to play a lot of cards at once to guarantee you recruit the Clan you need. This mechanic is a sort of resource management because your cards have multiple uses: to play Actions, Responses, Counter, and to Bid on Clans with Influence. 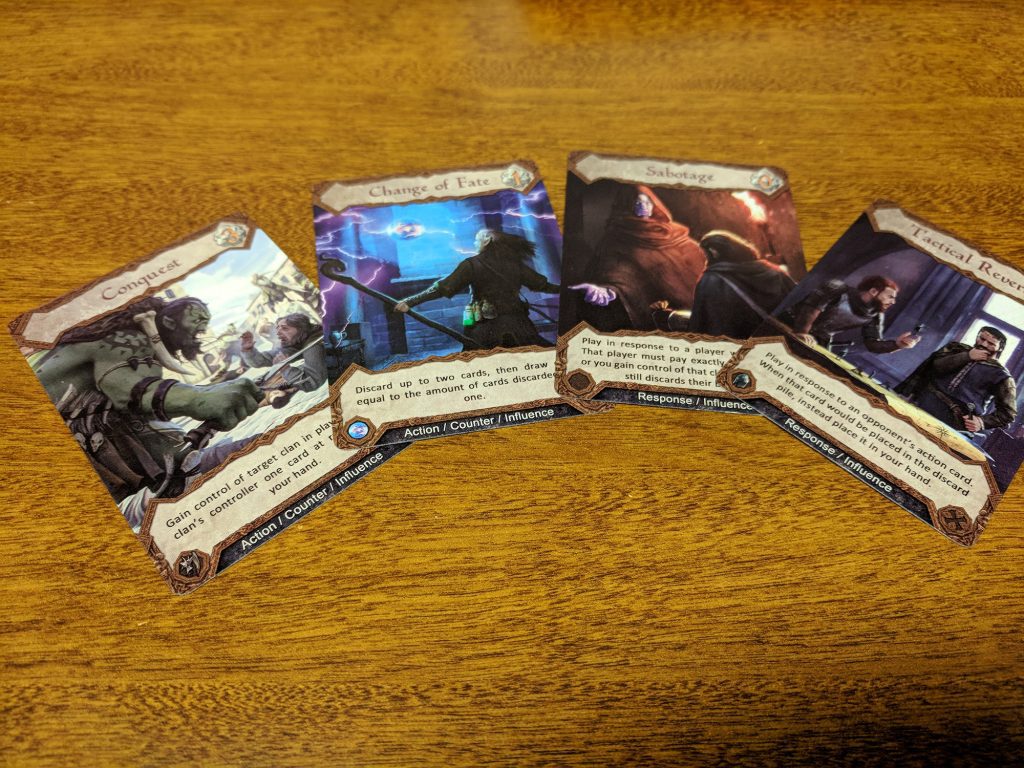 A good poker face, a good combination of cards in your hand, and clever timing go a long way in this game. A good bluff or well timed Counter can be a game winner. There are Response and Counter cards which help you defend against Action cards and knowing when to play these versus accepting the Action makes gameplay feel tense and exciting. Because of this mechanism there is a small amount of cause and effect. The timing of cards played and the effects they have on other cards may cause the speed of the game to slow down to make sure all the rules are being followed. But this isn’t new for anyone who is familiar with strategic cards games.

I loved the quick play of this game. It’s easy to play two or three games in an hour because the rules are so easy, but your strategy has to change on the fly to respond to your opponents. After a few playthroughs the cards are easy to memorize which decreases play time and allows for quicker thinking during Bids, Responses, and Counters.

The art on these cards is fantastic. The team at Arkon consist of some well known and extremely talented artists. In a way, I’m almost disappointed that the art is so good. The game plays pretty quickly so you aren’t going to spend much time enjoying the art during play. The graphic design, art, and cartography is so high-quality that I found myself wishing it was a slower game so I could ogle more. It’s easy to see the love and care that the creators have for this game and this world in the history of the races and each crafted piece of art. While the art was fantastic, the font on the card text was simple and bold. This is good because it was easy to read, (except for some symbols) but it also didn’t really match the style of the game. 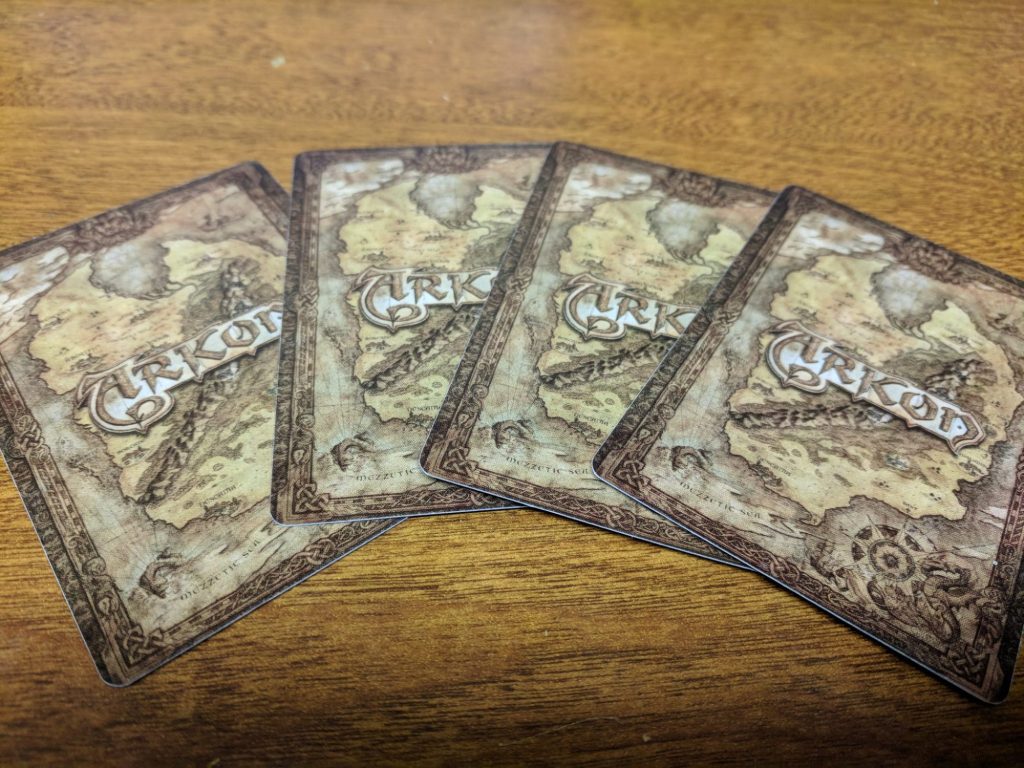 Arkon launches on Kickstarter Feb 1. Be sure to check them out and sign up for the event to follow along during the fundraiser.