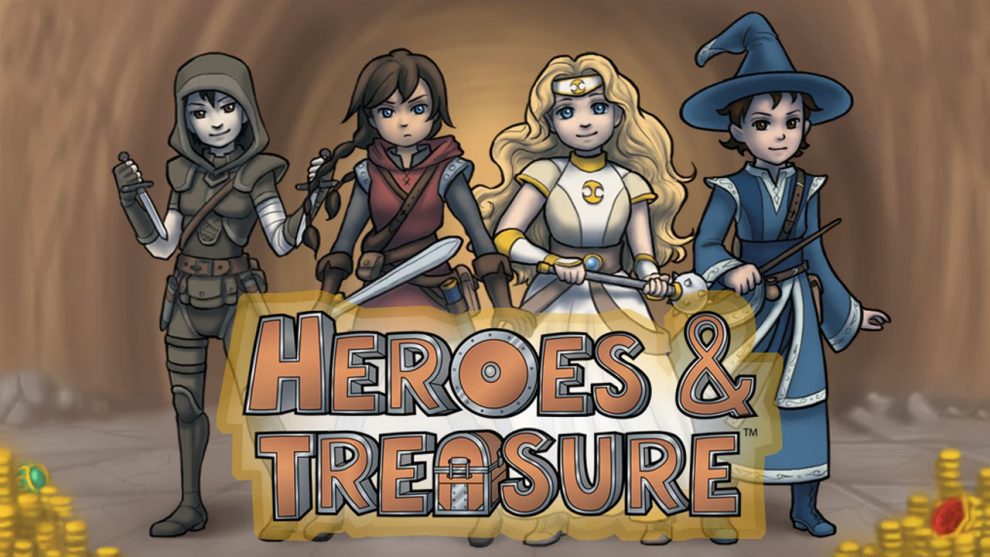 Jonathan Elder
Add Comment
On the hunt for a fun, family friendly dungeon crawl for your kids? Read our review of Heroes & Treasure and your search may be over!

(Note: The version this review is based upon is a prototype, and may not reflect the final components and rules for the game.)

“You open the door and before you stands an Elite Goblin who looks very angry. What do you do?” I look at Clara, my six year old daughter, expectantly.
“I want to take my sword and bonk him on the head until it falls off!” she tells me, swinging her arms over her head.
“That’s a little excessive, but I love it! Roll your dice,” I encourage.
She rolls her small grey dice hoping for a hit. Two pips show. Success! She, her sister, and cousins shout in exaltation.
“He’s not dead yet. You only did two damage. Olivia, you’re up next!” I say as her eyes grow big with excitement.

And so combat went. The kids were invested, interested, and fully engaged.

A group of adventurers meet at a tavern. They overhear the whisperings of a goblin infestation and decide they are just the group to take care of this menace for the kingdom. So begins the story of Heroes & Treasure, created by Jason Davis and his daughter, now on Kickstarter. At its core it is a board game dungeon crawl with a guided story and simple rules. It is an excellent introduction into both board games and roleplaying games. Depending on the makeup of your players they may prefer to approach it in a more tactical board game way or, like my team, they may prefer to roleplay their character and talk things out. In either case we found Heroes & Treasure to be a great fit for our age group and playstyle.

The game starts simply; you enter a cavern infested by goblins. Whenever you enter a new room the Quest Master describes the room and sets up any monsters or scenery necessary for play. If there are monsters in the room then combat starts and this is where the simplicity of the mechanics shine.

On your turn during combat you can do one of the following actions:

When attacking you don’t have to be adjacent to the enemy, and you roll weapon dice as noted on the character card. It has a specific color and letter of the dice on the card to help you remember which to roll. The letters aren’t on the dice but they are useful for colorblindness or if you need to create your own black and white dice. The amount pips on the dice differ and are not your typical one through six.

Back to the action…

A blank side means a miss, while any pips that are rolled are damage. Generally the dice have one to three pips on them. There are a few that are used for more powerful spells and magic weapons that have more. Anything above one pip is considered a critical which is important because some monsters are immune to critical damage and only receive one damage from normal weapons. For our table, it would have been nice to have multiples of the dice so that we didn’t have to share. Sharing is good, don’t get me wrong, but between four kids and the Quest Master (QM), some people got a little frustrated. It was me. I don’t like to share.

There are also spell tokens which is a wonderful idea to keep track of your spell book with. Spell based classes receive a limited number of tokens they use to cast those spells. The symbols on the tokens match the symbols next to the spell description on the card. The longer explanation of the spells are in the instructions but the dice required to roll for the spells should have been printed on the card also. Several spells allow you to attack any monster in the room, not just the closest to you.

The other action options are simple and straightforward and really only matter during combat because out of combat players can act freely. However, we found the movement action isn’t all that important because of the ability to attack your closest enemy without having to be adjacent. An interesting addition to the adventure is that whenever a character enters an empty room, even it has previously been cleared of monsters, the QM has to roll for a wandering monster which may spring forth to attack. This didn’t happen too often but could become tedious if the party likes to explore, split the party (never recommended), or the QM often rolls successes.

There are four characters available to play: rogue, fighter, wizard, and cleric. These comprise a stereotypical, but well rounded, adventuring party. Conveniently, that is also the recommended turn order. This didn’t always happen at my table, but we found it doesn’t break the game in any way to allow the players to decide when they want to go, and it also allowed for a little bit of strategy and coordination.

The class cards have all the information a player will need; what dice to roll, what abilities and spells they have, their health, and a short description of the class. It’s all easy to read and understand. My four year old, Olivia, can’t read but she understood which dice to grab when it was her turn to pound on a skeleton!

The art, done by Erfworld webcomic artist Xin Ye, was a big hit at the table. Everyone wanted to see everyone elses’ character before we even started. Every time I reached into the box to pull out a new monster, it drew oohs, ahs, and gasps from the kids. They really enjoyed the family friendly art style, matching the theme as you’d expect without being dark or scary or bloody, but not goofy or cartoonish either. It’s very clean without much unnecessary embellishments, yet detailed enough to capture the eye and draw in the players.

The class cards also display what you’ll gain at each new level; more health, spells, and abilities. It’s easy to keep track of because whatever level of the Campaign Book you’re on is the level of the characters. No worries about bookkeeping or picking skills, it’s all conveniently listed on the class card.

The monsters have their own cards which have some text about them, their health, the dice it rolls, special abilities, and a picture. And in a nice unique way it includes different difficulty levels; to adjust the difficulty you increase the health and roll a different dice that has more pips. Playing with just one or two players? Use the Easy stats. Playing with all four characters? Bump it up to Hard and give them a challenge. It’s easy to adjust what level the monsters on on the fly to make the game enjoyable for whoever is at the table.

There are a lot of components to this game. The map boards, which include a cavern side and a stone (or building) side, are easy to distinguish and the instructions in the Campaign Book easy to follow. The character boards are great for little hands and young readers. The dice are colorful and it was not a problem for anyone to know what dice to use. All the standees have great art on one side but would look much better with art on both sides, so I hope that funding stretch goal is reached. One of my complaints though are the health tokens. They are small red plastic discs. They reminded me of Tiddlywinks, if you remember that game, and the kids consistently fiddled with them causing them to fall on the floor or slip under the map. I think a simple point tracker on the character card would work much better and be less prone to Tiddlywinking all over the place.

Overall, the kids and I really enjoyed playing this game. The story that came with it wasn’t a complete Campaign Book, only the first five levels, so I’m not quite sure how it all ends, but what we were able to go through was very fun. Each level takes about 30-40 minutes, which felt like the perfect amount of time for us, but if your group is older and can play longer sessions, it transitions seamlessly between levels. Because of the playstyle it can get a bit repetitive; enter new room, fight bad guys, look for stuff, enter new room, fight bad guys, look for stuff. This may be tedious for some children so the short play time is helpful. This game claims that kids four and older can play it, and my very own four year old Oliva, had a blast. Even though she couldn’t read her character card, that didn’t slow her down. The oldest in our group, apart from me, was our nine year old cousin, Drake, and he played an awesome wizard. The two others were Clara, six, and Deliah, eight. These kids made up an awesome adventuring party. They all loved the components and art,  got excited when they found items like weapons or keys, and the story interested them as they did favors for the innkeeper and the kingdom. 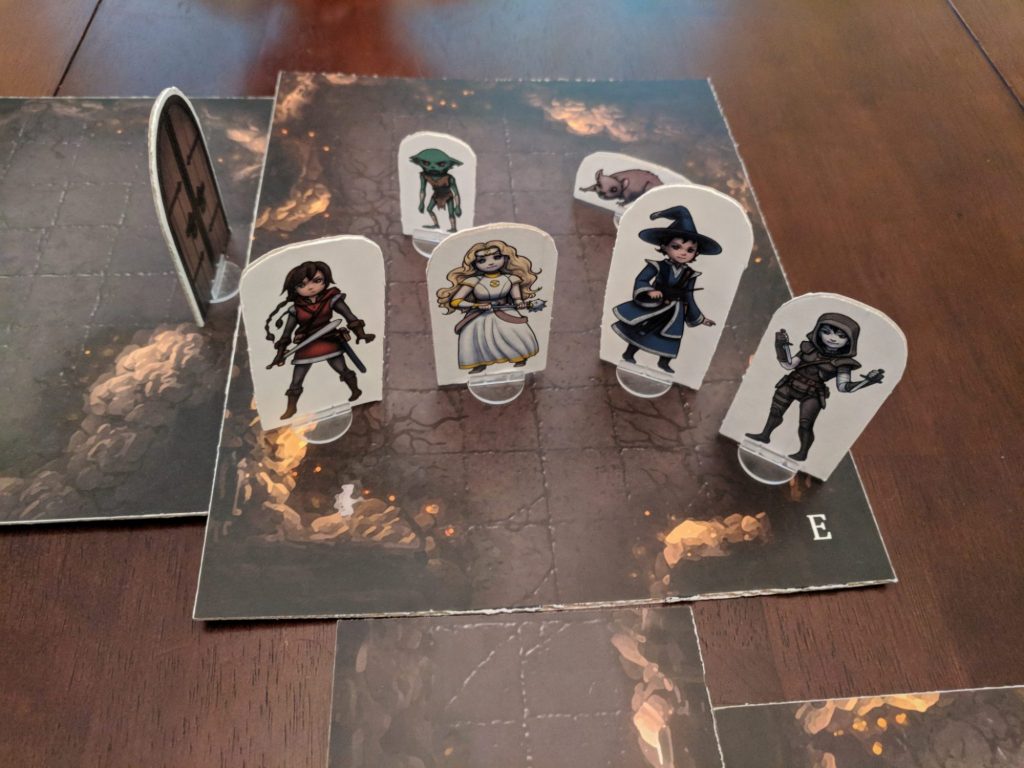 I would suggest, if you’re looking for a great family game with rules anyone can follow, that you back this Kickstarter. It’s excellent for younger kids. If you’ve got kids who are tweens or older and are already familiar and comfortable with gaming this may be a bit below their level. Either way, check out the Kickstarter and get the full scoop on Heroes & Treasure. 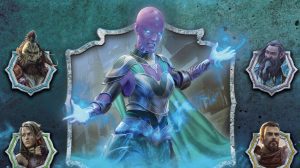 Steal, trick, bluff, and defend in this fast paced card game. Check out our Arkon review for details. 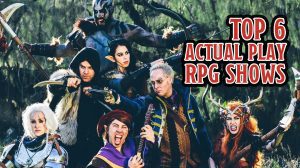 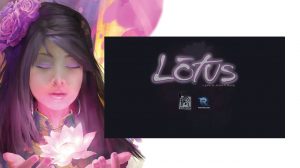 Meditation or gaming. It's hard to decide when it comes to this beautifully crafted game. Come see if you'll enjoy the digital version of a very immersive game... 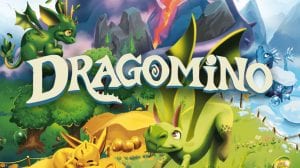