Sequels are becoming increasingly more popular in board games and some get a better reception than others – Gaia Project killed Terra Mystica for me, Caverna has shut the door on Agricola for people wanting a less punishing game, Zombicide: Black Plague improved several rules from the base game to make the experience more thematic. On the other hand, Transatlantic hasn’t reached the critical acclaim of Concordia, Uchronia never lived up to Glory to Rome, and the Castles of Burgundy Card and Dice games couldn’t fully capture the original game.

Orleans, one of the original bag-building games, is one of my personal favorite medium weight euros. The gameplay is an interesting engine building puzzle where players are acting as french nobility who are trying to acquire as much wealth as possible. One of the reasons Orleans has stood the test of time are the two expansions. The first expansion, Invasion, added a co-op variant and the second, Trade and Intrigue, improved the value of the trashing mechanism and added new significance to the countryside board.

The storied existence of Orleans added another chapter at Essen 2017 when designer Reiner Stockhausen and DLP games released Altiplano. With the same designer, publisher, and core mechanism (bag building and action selection), Altiplano was billed as the sequel to Orleans and my interest was piqued. My hope was that Altiplano would be more Gaia Project than Uchronia, read on to find out if my hopes were fulfilled.

One of the niceties of when a designer makes a title similar to their previous work is the gameplay feels like coming home to familiar smells after a long trip. Altiplano is built off of the same chords as Orleans, utilizing a similar bag-building mechanism with some adjustments, all of which I think improve the game.

Orleans is one of the “euro”-est games to date. Each round players draw a number of pieces from their bag and choose where to use them. If all of the spaces are filled, the player can then activate it on their turn. Around this core mechanism is a fairly standard resource conversion, engine building, point salad puzzle.

The setup for Altiplano – seven locations where actions are performed (left), additional actions which can be purchased (top right), and one player’s board(bottom right).

The first major change is the start of the game. In Orleans each player is given the same starting pieces and board, and there was very little variability in the board setup. The lack of starting asymmetry works for a lot of games where each players’ early turns have a large impact on the choices available to other players. In my plays of Orleans, I always felt like I had to force myself to divert from strategies. Altiplano fixes this by giving each player a unique starting ability and a different group of resources from their opponents.

Each starting tile has an action on it and the resources the player gets to begin the game. For instance, the bottom left tile lets you use one food to get a fish and that player begins with two food, one fish, one stop, and one money.

The second big change that Altiplano takes from Orleans is how trashing pieces is implemented. Most good deck and bag building games implement a trashing mechanism where players can thin their bags to build up around their strategy. In Orleans this was done by sending your pieces to a separate board and getting a resource bonus for the space they landed. 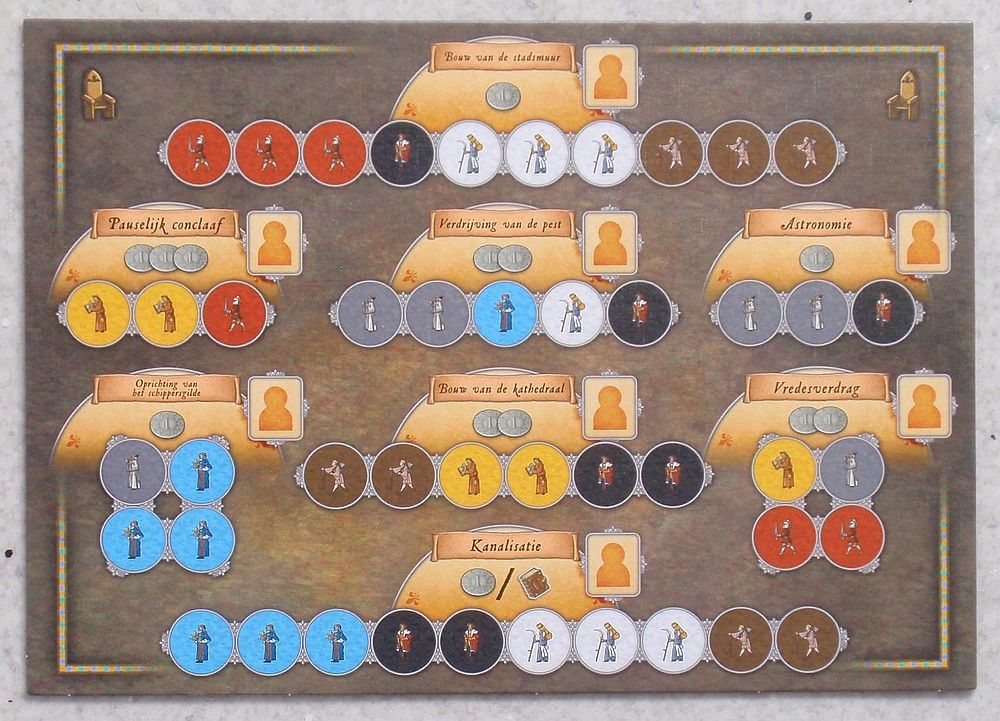 The beneficial deeds board in Orleans. As you trash a worker you receive the bonus in the region. Whomever fills a region also gets an end of game bonus.

The problem with this mechanism was the player who filled each region would get a much larger additional bonus. This created moments in the game where turn order would decide who would get those bonuses, instead of any strategy the players implemented.

Altiplano fixes this by giving each player a warehouse that they can send their goods (the equivalent of trashing them). Then at the end of the game players score points based on which rows they’ve completed. This is a dramatically better mechanism since it allows players to invest as much work into the warehouse as they want and not worry about the global player board. One additional note, the second expansion for Orleans – Trade and Intrigue, added a new beneficial deeds board which included much more valuable spaces making trashing pieces a more viable strategy and largely alleviated the issue in the base game. 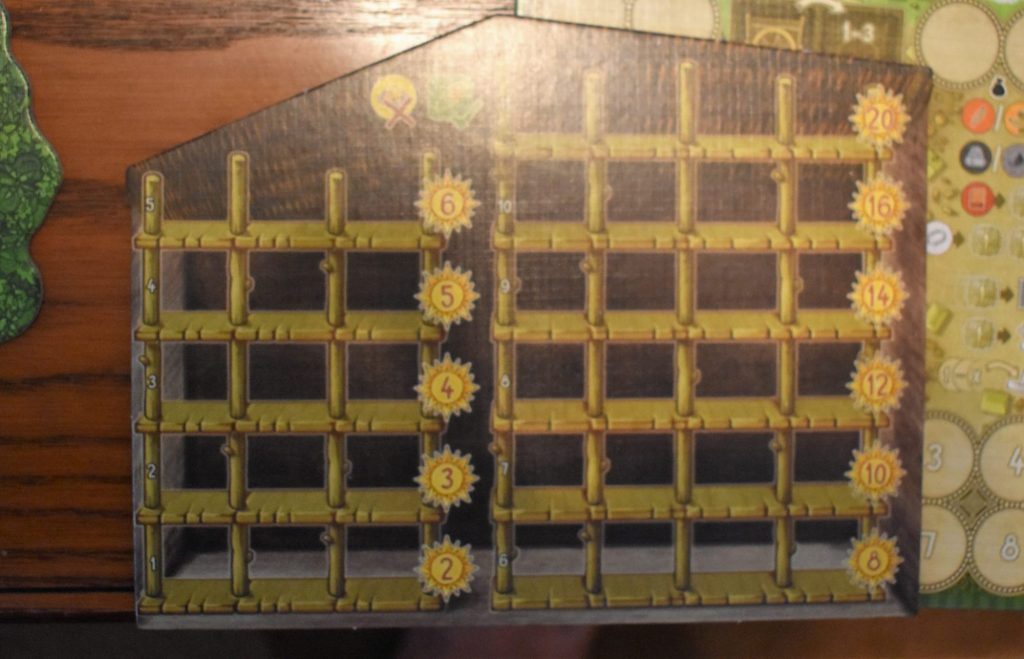 Each row of the warehouse can only contain one resource. Players score the points in the sun if that row is completed.

The third big change was adding a “discard pile”. In Orleans, any pieces you used would end up back in your draw bag. Altiplano added a discard pile that, once your bag was emptied, would refill. This results in a fairly large strategic shift to the game because you could rely on only having one or a few copies of certain pieces and you could guarantee that you would get them every few rounds. Orleans didn’t have that same luxury so if you were reliant on certain pieces you would need to have a sufficient number in your bag.

Finally, Altiplano incorporates a new puzzle to the gameplay that wasn’t present in Orleans. At the beginning of the game, seven spatial locations are randomly ordered and players pick one to start. Each action a player takes has one of the seven boards associated with it and in order to use that action the player needs to be on that board. At the beginning of the game players can move around the board, but at a fairly slow pace, but movement can be improved to make more locations accessible each turn. This additional puzzle adds an interesting dynamic to the engine building and planning of the game because, unless you have a lot of movement, the engine you build needs to be concise.

The blue player can take the two actions on the right because he is located in the forest region, note the tree on both the actions and the space the blue player is on.

I have really enjoyed Altiplano. The gameplay is interesting, the resource management and pool building are a great combination, and Reiner Stockhausen learned a lot from the time he has had with Orleans. My one complaint with the game is the length. In a 4-5 player game you can expect the game to go over two hours especially in your first few games. This is significantly longer than a game of Orleans. I don’t feel like the game can really be any shorter though since, in my plays, I’ve needed most of the length of the game to get my engine going and to fill my warehouse. The other complaint about the game is the lack of interaction. Like Orleans, the game is largely multi-player solitaire, but this might not be an issue for some people playing the game.

At the end of the game this player will score 2 points for the first row, 3 for the second, 5 for the fourth, 6 for the fifth, and 10 for the seventh for a total of 26.

Altiplano has one of the best resource management puzzles I’ve experienced in a game. Unlike in Orleans where resources and workers were separate entities, they are one in the same in Altiplano. This makes decisions around moving workers to your warehouse more intense since they may also be valuable parts of your engine. The balance between using your workers and scoring points is a tense struggle and is exactly what I want in an engine building game.

Much of this review has focused on the differences between Orleans and Altiplano. If I didn’t have either today I would probably still get Orleans because of its two expansions. The co-op gameplay in Orleans: Invasion is still my favorite way to play and the trade board in Orleans: Trade and Intrigue is incredibly dynamic. On the other hand, if I wasn’t interested in co-op games I would likely get Altiplano. It has the better system and improved mechanisms, plus the theme of alpaca farming is just better than the generic medieval French theme of Orleans, and if Altiplano gets the expansion love that Orleans has gotten, you’ll quickly see Orleans on my trade pile.