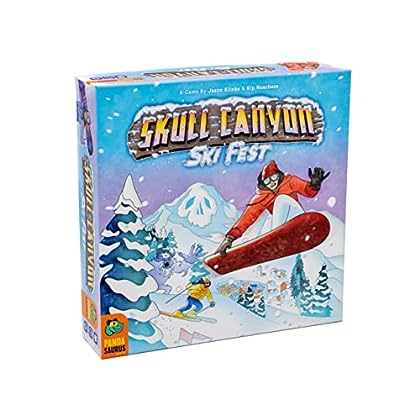 Prove you're the ultimate skier by taking on the most difficult runs, collecting the best gear, and earning the highest score!

To get your ski on in Skull Canyon: Ski Fest, you need to collect and turn in matching sets of slope cards. Each set you turn in lets you ski a run on the mountain, earning victory points, fame, and a spot on the run scoreboard that tracks who performed best on each run. The higher a run's difficulty rating, the more cards you need to collect to complete it — but you'll also score more points and earn more fame.

At the end of each day of skiing, you take a break at the Ski Village, where you can take bonus actions and acquire gear to prepare for the next day of skiing. At the end of the third day, players score for the number of easy, advanced, and expert runs they control, then whoever has the most victory points wins!