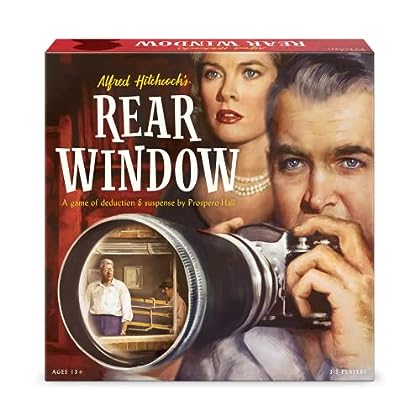 Experience Alfred Hitchcock's masterpiece film Rear Window in a game of deduction and suspense. Carefully observe strange clues and ominous patterns in the things going on in the apartments across the way. There are parties, knives, a saw, bickering, laughing, music...and a mysterious trunk. Do you detect a murder? Or is the secret, private world of the neighbors planting frightening ideas in your mind?

In Rear Window, one player takes the role of director Alfred Hitchcock — the "Master of Suspense" — and communicates via building windows clues and signs for the other players without ever uttering a word, ideally giving them enough to go on that they can figure out who the murderer is — or whether a murder even took place.

If a murderer is out there, you need to nail down all eight attributes of that person by the end of four rounds without them catching on to what you see and know.