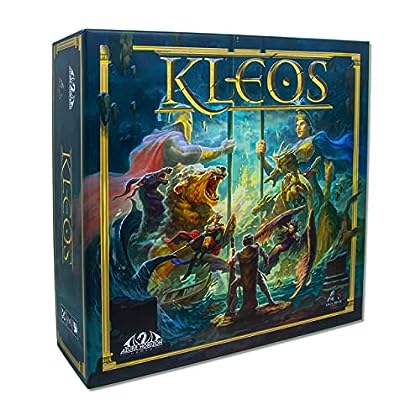 Equally feared and worshipped by mortals, monsters, and spirits alike, the Olympian Gods sit upon Mount Olympus and watch the world go by. That is, until word of the founding of a new city reaches their ears. Kleos, a city said to rival and eventually surpass even Troy and Athens. Zeus has declared a week-long contest among the gods to decide who shall be the patron god of this city-state. So call forth your champion, ready your armies, and use every divine power you possess to win at all costs. And remember, the gods do not play fair!

Kleos is a lightly asymmetrical game of strategic combat and area control. It combines hex-based combat with your favorite card game elements for a dynamic experience. Join the contest as one of five Greek Olympian Gods - Ares, Artemis, Hermes, Athena, or Dionysus - each with their own unique champion and divine deck.

Kleos features tactical card-play and action management. Play powerful blessings and curses to gain advantage. Summon Minions onto the board or use them as upgrades, serving as mounts or offerings to bolster their allies.

Command your forces during the action phase. Manage Minion actions for combat, area control, and tactical advantage. Send your Minions to the Greek Isles to recruit epic heroes and monsters of legend, such as Medusa, Perseus, and Pegasus. Organize your forces wisely. Positioning is key to victory!
Take the role of a Greek Olympian God, summon your champion, and compete for glory in the eyes of Zeus to be named the patron god of the rising Greek city-state, Kleos!