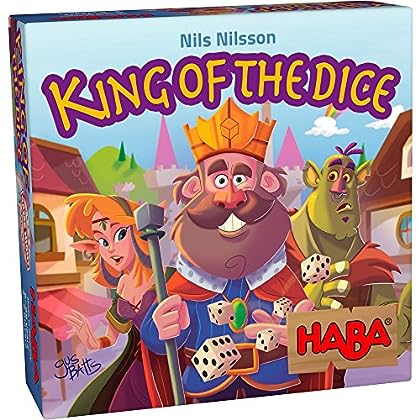 King of the Dice details

King of the Dice overview

King of the Dice

You're finally a king! All your dreams have been fulfilled. You sit content in your castle and look out over your wonderful kingdom. Green meadows, rolling fields, high mountains and clear rivers stretch as far as your eyes can see... but one thing is missing from your kingdom: citizens! So you announce the merits of the kingdom all over the country – in the rich cities, to the crazy gnomes in their workshops, to the dwarves in their deep mines, and also to the orcs, fairies and the sorcerer's apprentices.
But they aren't easily convinced; after all there are also other kings trying to win them over. That's why you need skill and luck with the dice to entice the best citizens to your kingdom. But watch out for scoundrels and dragons. Otherwise your thriving kingdom will soon be a wretched wasteland, and you'll have to watch as someone else is crowned King of the Dice.

Step 1: Gain new citizens for your kingdom by fulfilling the various requirements on the cards with three rolls of the dice.
Step 2: Special cards provide you with benefits. But watch out for scoundrels and dragons.
Step 3: The player with the best citizens at the end wins the game!

Buy King of the Dice on Amazon

King of the Dice reviews

King of the Dice Game Review

Justin gets the 2017 release King of the Dice to the table! Learn more about this family dice chucker in his review.