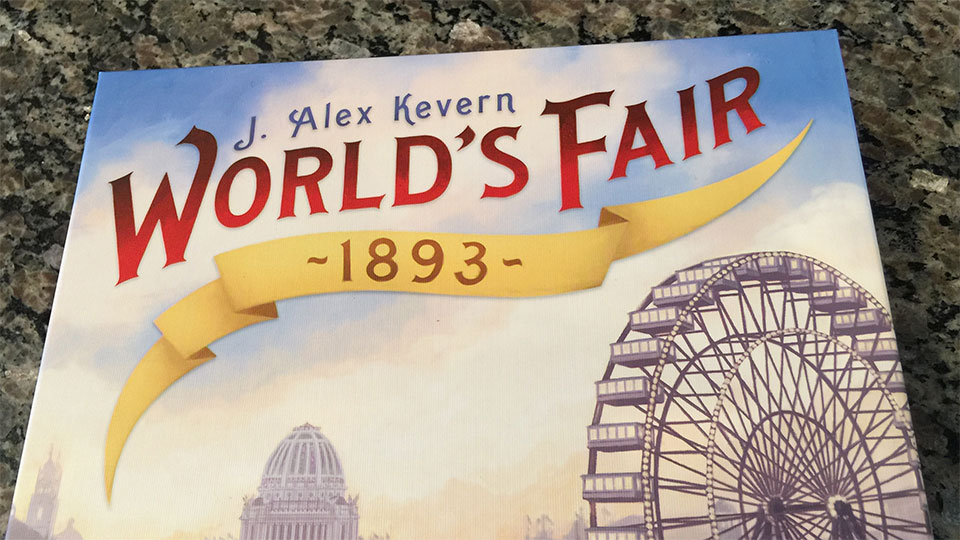 World’s Fair 1893 is a set collection and area control game from Foxtrot Games, publishers of the wildly successful board game Lanterns: The Harvest Festival. It was successfully funded on Kickstarter on October 28 and delivered to backers in April/May 2016. I considered backing it but ultimately decided against doing so, and I’ve regretted it ever since.

After seeing all the happy Kickstarter backers enjoying their game I decided to preorder the game so that I’d have a retail copy as soon as possible. It got here last week and I couldn’t be more excited about it. Let’s dive in and see just what Foxtrot has in store for you.

The first thing you’ll notice about World’s Fair 1893 is the paintings and illustrations from artist Beth Sobel. The colors are deep and rich and really draw you in. 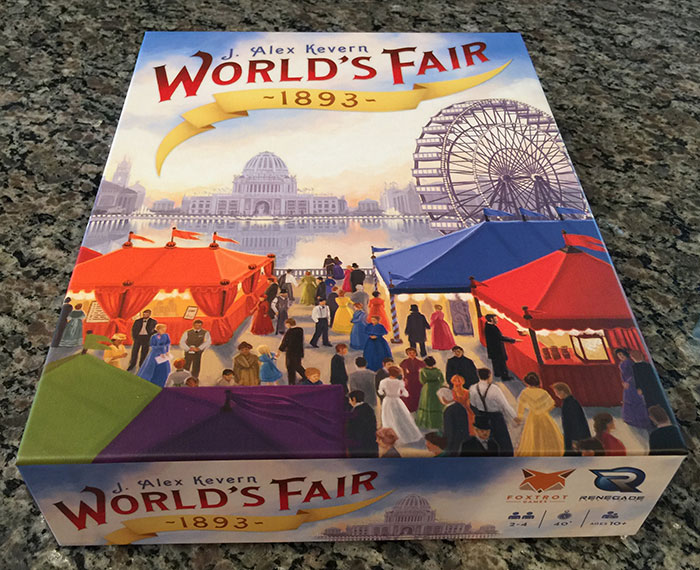 It’s always difficult to determine box size so I’ve used copies of Lanterns and Gold West for comparison. The box slots in perfectly between those two games; being about 15% smaller than Gold West and about 15% bigger than Lanterns. In other words it should easily fit onto your shelves alongside those two excellent games. 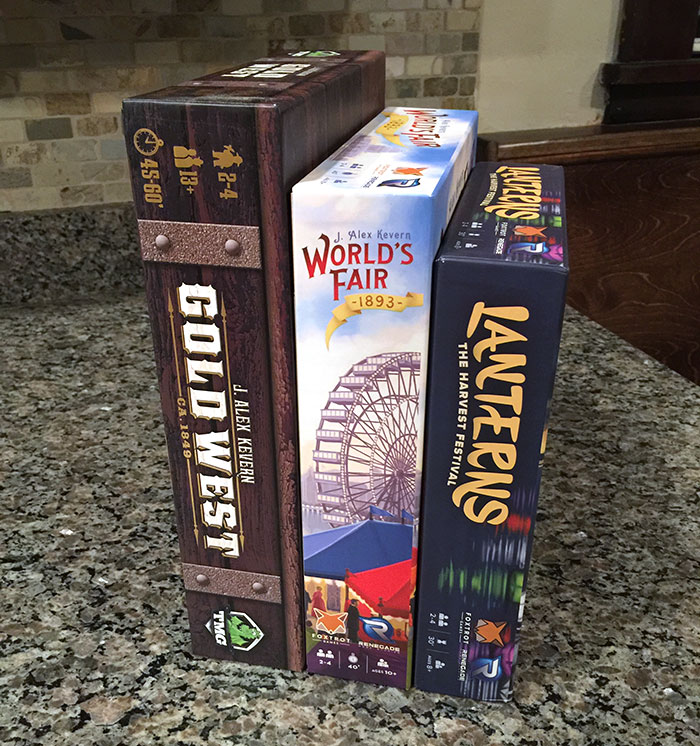 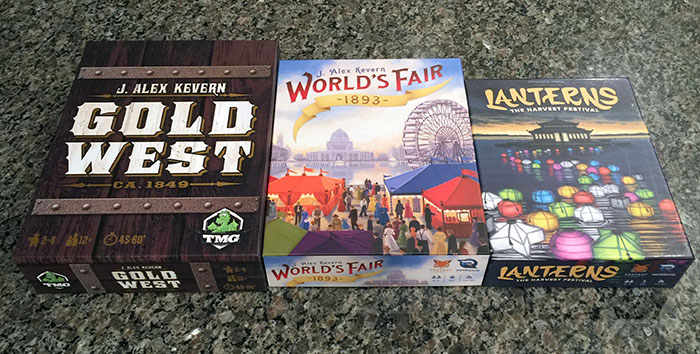 The interior of World’s Fair 1893 contains a fairly standard board game insert, with just enough room for all the components to fit snugly without moving around too much. After punching out all of the cardboard pieces I decided to keep the cardboard sheets and stuff them under the insert. It definitely improves the fit and I’d recommend doing the same. 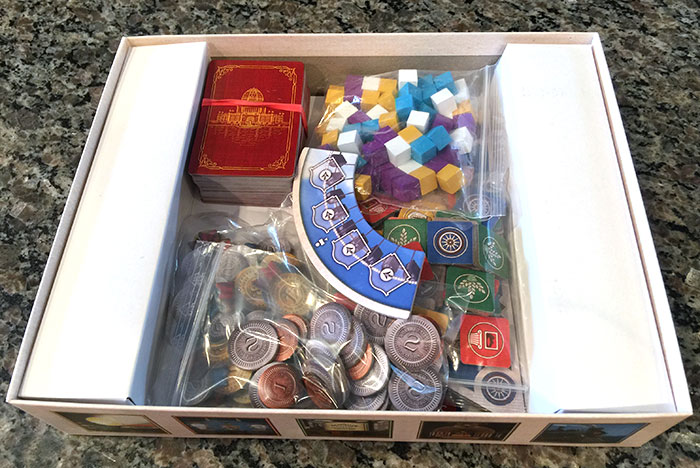 The publishers of the game included more than enough high quality plastic bags for all the various components. As you can see from the picture above I didn’t bother separating the components too granularly. Visually speaking they’re quite distinct and they’re easy to split apart before game time.

The Components of World’s Fair 1893

The visual centerpiece of World’s Fair 1893 is the enormous ferris wheel, a first of it’s kind in the world. Each car could hold 60 people, for a total capacity of 2,160 people at a time. Mind-boggling! The wheel in the game is just a bit smaller and easily fits onto a standard dining room table. 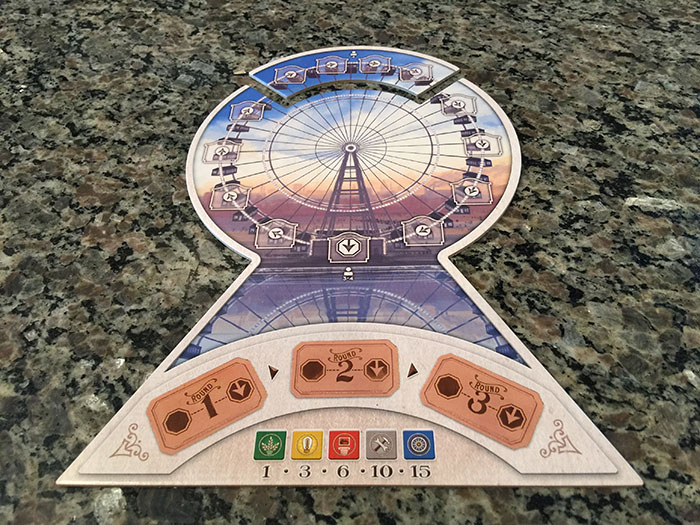 The remainder of the board is made up of 5 pieces, each representing a distinct area of the World’s Fair: Transportation, Manufacturing, Fine Arts, Agriculture, and Electricity. These pieces are separate from the main game board and are meant to be slotted in randomly to increase variability.

Below you can see the game board partly set up for a 4 player game. Note that the area tiles do fit snugly against the ferris wheel. I simply left a small bit of space to better illustrate the individual pieces. 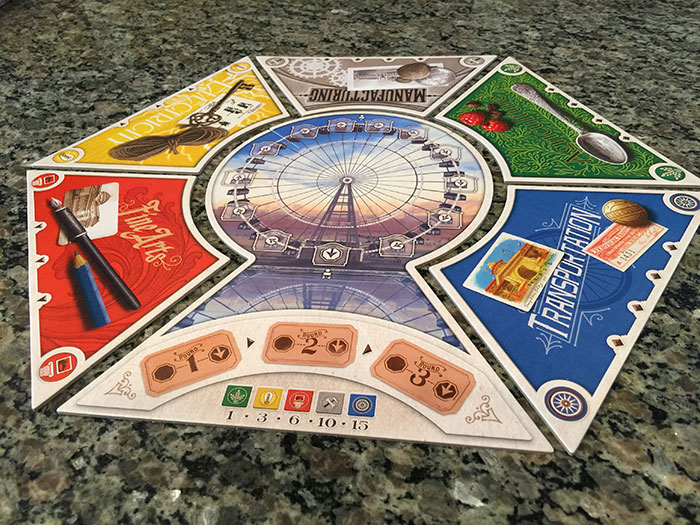 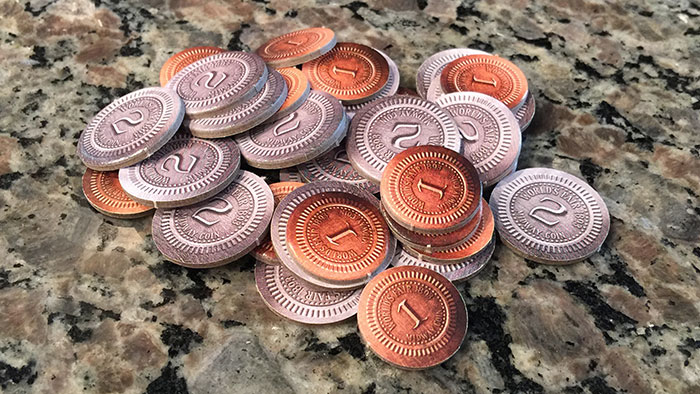 There are 37 medals are used for scoring everything else: areas of control and most number of Midway tickets. Both the coins and the medals are worth point equal to their face value at the end of the game. 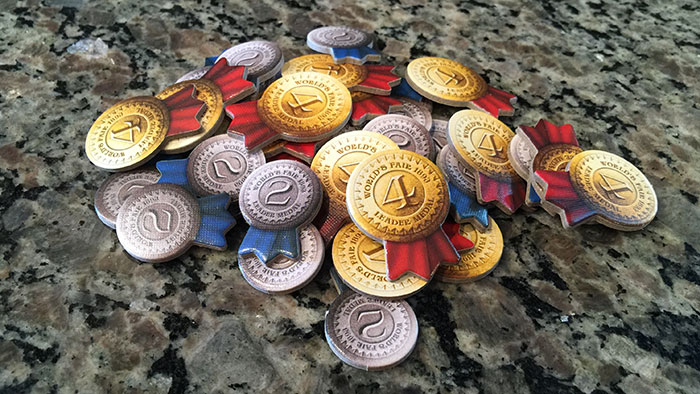 The exhibit approval tokens are used to score sets at the end of the game. Throughout the game players will collect colored exhibit cards which can be approved during end of round scoring. Each approved exhibit card will earn the player a single token of that same type. 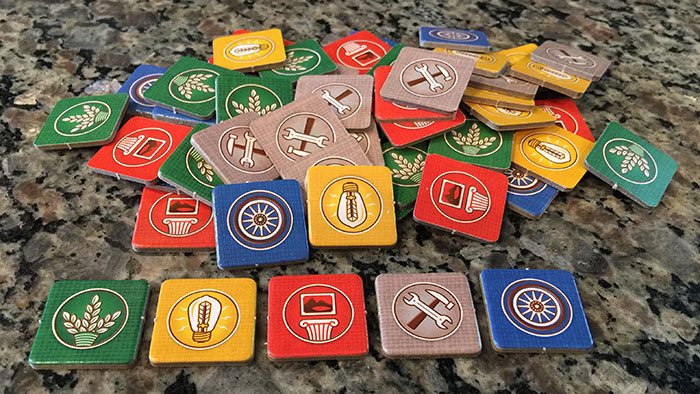 Each player will receive 22 supporter cubes in their color: gold, purple, white, and blue. One of the things I absolutely love about J. Alex Kevern’s games is his choice of colors. In Gold West he used the same colors, except for orange in place of yellow. Thanks Alex for choosing something other than standard red, blue, green, and yellow!

Placing a supporter on an area of the board allows players to collect all of the cards currently at that location. 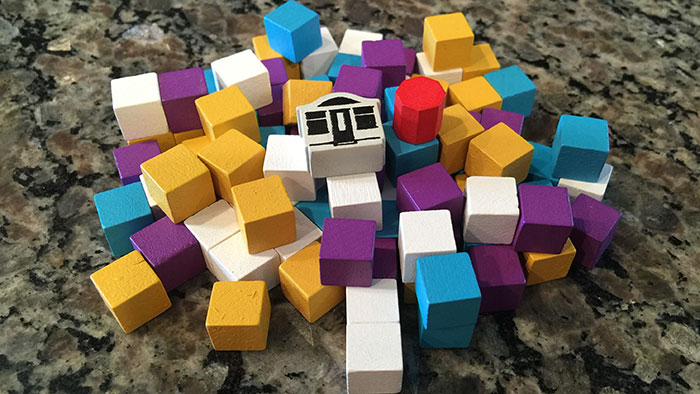 The ferris wheel car is used to keep track of where you are in the round, and the red round marker is used to indicate which round you’re currently in. 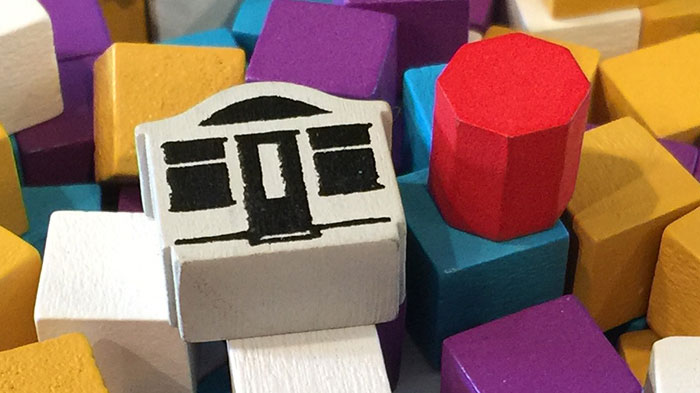 World’s Fair 1893 is primarily a card game, and comes with a deck of 91 cards broken into 3 main types: Exhibit cards, Influential Figure cards, and Midway Tickets. These cards are collected throughout the game when placing your supporters (cubes) on the various areas of the game board.

There are 5 exhibit types (8 of each type), one for each of the main areas of the board. Each of the cards feature a photo of a different exhibit from the World’s Fair, along with descriptive text from each. Cards include the Daimler Quadricycle, Japanese Vases, World’s Largest Cheese, Navy Searchlights, and Brazilian Coffee.

Players will collect sets of these cards in hopes of being able to approve them during end of round scoring, thereby converting each approved card to an exhibit approval token (seen above). 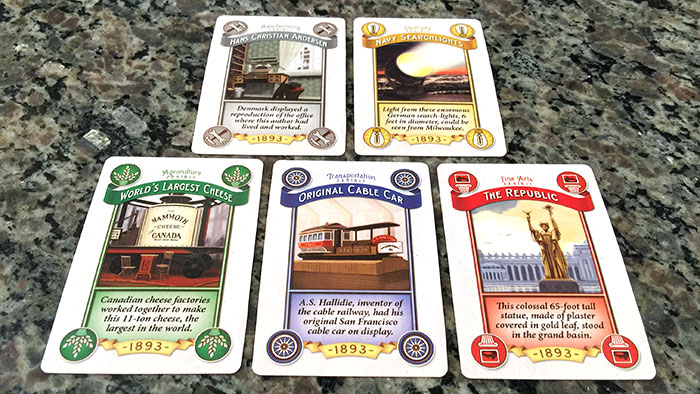 There are 23 Influential Figure cards which offer additional movement options for players. The cards feature some of the most prominent people in industry, arts, science, and culture of the time including Bertha Palmer, George Davis, Charles Schwab, and one of my very own ancestors Cyrus McCormick Jr. (inventor of the McCormick Reaper.

Midway Ticket cards are used for end of round scoring. The player with the most collected cards will score a number of bonus points based on the player count. After that bonus is awarded each player will receive coins equal to the number of Midway Tickets they possess. 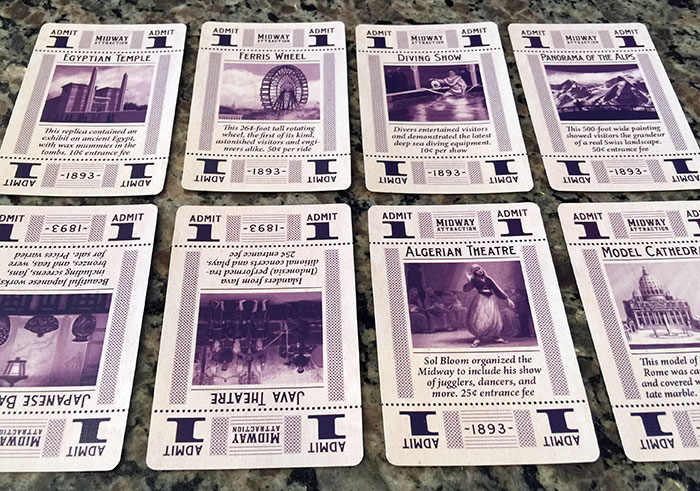 In addition to the deck of cards for the game, there are 8 player aid cards. The 4 Start Bonus cards are used at the beginning of the game to give each player a slight, but distinct advantage. The reverse of these cards list out the actions which can be performed by the Influential Figure cards.

The remaining cards provide details for the scoring phases which vary based on player count.

The rulebook for World’s Fair 1893 is high quality with thick, glossy paper and feels great in the hand. The capable team of Adam P. McIver, Dustin Schwartz, and Jason P. Kingsley have made sure that the rulebook is well laid out and easy to read, with lots of high quality gameplay illustrations, and no noticeable errata. 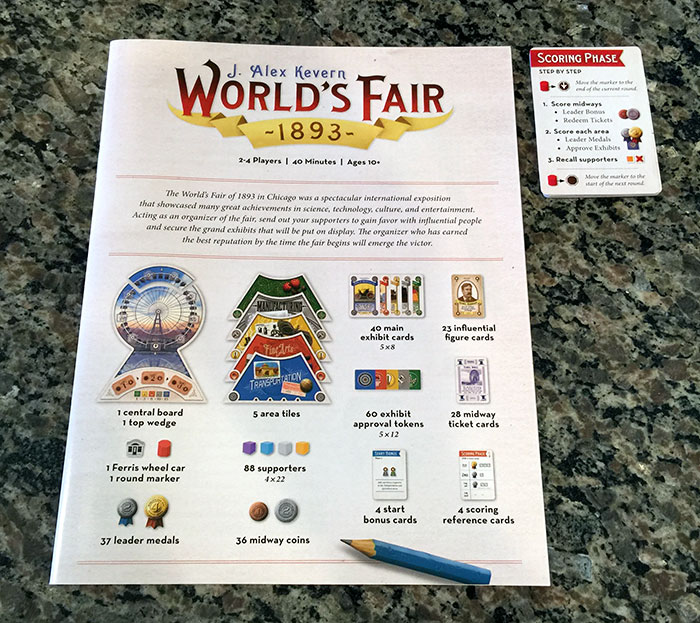 What I Dislike About World’s Fair 1893

We all know that no game is perfect and the same is true for World’s Fair. I’ll be publishing a gameplayer review of it in the future after hitting my minimum play limit. For now we’ll focus on a few minor issues.

Designer J. Alex Kevern is a wizard with cardboard. His previous game Gold West was a masterpiece in variability, randomization, and differences based on player counts. World’s Fair is no difference. With Gold West all the pieces fit within a frame which mean that they didn’t move around. In World’s Fair, the exhibit area tiles fit loosely around the ferris wheel and move too easily. This means that with just a little bump you can easily knock the entire board out of whack. It’s not too big a deal, but be aware of it.

The exhibit tiles themselves, while thick, have a slight warp from side to side. This could just be my copy. Since all 5 tiles are double side this can be mitigated by simply turning the piece over.

While I understand what the designer was doing for with the coins AND the medals, I can’t help wishing they would have picked one or the other. They both equate to points at game’s end and the rules would have been much simpler.

The only thing that could be an actual issue with the game is a slight, but noticeable color variation to the backs of some of the playing cards as you can see below. It’s almost impossible to tell when looking at one card by itself, but noticeable when looking at several together. This could allow some players to use that to their advantage. It doesn’t bother me, but it’s worth noting.

All in all World’s Fair is a marvelous game. I’m so happy to have this in my collection, I’m eagerly anticipating future plays, and I can’t wait to introduce my friends and family to it. In fact my 10yo daughter and I have played it twice this holiday weekend and I’m feeling the urge to go for a trifecta. I hope this unboxing has convinced you to pick up World’s Fair 1893 and try it out for yourself.