Ghosts of Saltmarsh First Impressions – Adventuring by the Sea

AVAST! Ghosts of Saltmarsh is the latest collection of Dungeons & Dragons adventures from Wizards of the Coast. Much like Tales From the Yawning Portal, this collection digs into D&D’s history, pulls together some of the finest adventures published, and breathes new life into them. While that previous product gathered together some of the greatest dungeons ever delved, Saltmarsh ties together a fantastic collection of seafaring adventures and provides extra rules and content for running your own nautical campaigns. 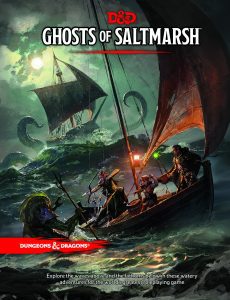 We here at Meeple Mountain are currently playing through this campaign and, so far, are having a blast playing a group of investigators thrown together to uncover the mysteries that Saltmarsh holds.

We’ll take a look at the product itself and also give you some details to our playthrough so you can get a first taste of what this mini-campaign is like. We’ll keep the story details to a minimum in case you plan on playing it yourself but there may be some minor spoilers about the first adventure, The Secret of Saltmarsh. Just in case, “Spoilers ahead, landlubbers!” (Ok, last pirate cliché, promise!)

First up is the book design itself. As has been the case with all of the Fifth Edition D&D books, the quality of the book is 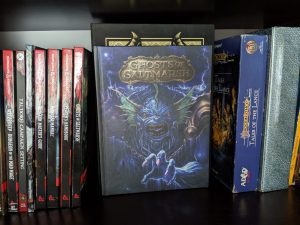 fantastic. The book is sturdy and the pages are high-quality paper with full color printing. Wizards has graciously provided us with both the standard and deluxe edition covers and they both look great! The artwork on the standard cover (above) is so evocative, you know exactly what you’re going to be getting into with this book. The deluxe cover (available only through your local game store) has a metallic blue sheen to it and a threatening sahuagin (sa-hoo-ah-gin) leering at you. This cover also has a scuff-proof finish on it that seems to work well. I will say this seems to dull the contrast of the artwork a bit but it’s not a deal breaker and still looks good on a shelf. 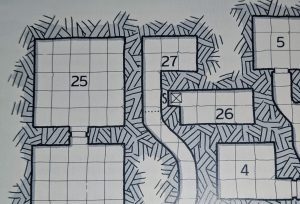 The graphic design is top notch as always with fantastic color illustrations, maps, and easy to read sections. One graphic design feature I want to point out is the inclusion of the original maps in a non-photo blue style.This has a nice old-school feel to it that helps showcase the history behind these adventures.

The adventures themselves are a solid collection of seven stories that take characters from levels 1-12. Spanning roughly 20 years of history, these tales range from the classic U-Series first published by TSR UK in 1982 to modern seafaring adventures from the early 2000s. Each of these can be played individually or combined into a mini-campaign; tied together by the connective tissue of the town of Saltmarsh itself and the intrigue that lies within that booming port town.

There is a good thematic blend of land-based and sea-based action with lots of mystery and political intrigue thrown in. Some have the feel of a Pirates of the Caribbean story, while some feel like an H.P. Lovecraft story, and yet others have the atmosphere of  a classic Scooby Doo mystery. Some of the adventures are stronger than others, but there’s enough variety here to keep coming back even without the overarching mini-campaign. That being said the mini-campaign ties things together well introducing some factions to play off each other and explaining how things could develop after each adventure.

The Appendices are a treasure trove (pun possibly intended) of great campaign information for your own seafaring adventures. Appendix A fleshes out ships, sea travel, sea combat, sea encounters, and even some sea locations that can be thrown in as side quests. There are optional rules for crew loyalty, ship upgrades, and hazard DCs. There are also random generation tables including ones for ship names and crew names where you can create classic sea dogs like Drizzlybeard of the Drunken Jester!

Appendix B has a few magic items found within the adventures and Appendix C has the monsters and NPCs that can be found within the adventures. A nice touch that I have noticed with Fifth Edition adventures are the inclusion of generic NPC archetypes. For example, rather than stat out a specific pirate crew, they give the stats for each role on a generic pirate crew and now these can be reused with minimal work. Side note: Appendix C contains a great illustration of a Locathah (fish-folk) with a pet sea lion that is just adorable enough to make you want it in your campaign.

We are currently playing  through the first part of Secrets of Saltmarsh. We will give our thoughts on that for now and come back later with a wrap-up report. As the Dungeon Master I have read through the book and will give some general thoughts on it from the DM’s perspective as well. 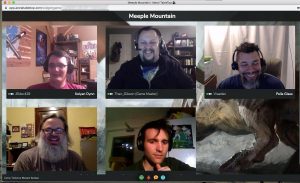 We are playing with a party of four players. They naturally chose two “landlubbers” and two “seadogs” which allows for some great character interaction, especially since the land guys are part of the Town Guard which is a military unit sent by the kingdom to bring some order to the town. This makes them outsiders and while their fellow players are not as suspicious, many of the local sailors don’t trust them fully. This will become more important later as faction relations tense up. As the DM I am looking forward to this; I love intrigue-based campaigns and this adds a nice splash to the mix.

Starting at first level in this campaign can be brutal. There are a couple of monster encounters that are high-damage but low on HP. We have had several Death Saves in the first few sessions (giant weasels and spider swarms can be vicious!). Some of that was due to some bad dice rolls and some of that was the adventure itself. You might have someone go down, but a healer should be able to handle that before things get out of hand.

I do have a few minor negatives regarding the story structure. First, each adventure states what level the players should be at by the time they finish it; however, it doesn’t clearly state how that happens. I assume the design was to leave it vague for the DM to determine. Reading through it, you can see where obvious story breaks are and those look like the best place for milestones. It’s not hard to figure out, but one extra sentence that says, “After this milestone, the characters advance to level 2” would have been helpful.

Second is a problem often found with older modules and that is the presence of dead space. Sometimes, especially in a dungeon crawl situation, there are areas of the map that just don’t have anything interesting in them (besides a bit of flavor text) yet a systematic exploration of every room forces the game to move through them. It becomes monotonous to say something like “you search the room and find nothing of interest” again and again. My recommendation would be to either fill those with something interesting or skip them in favor of story beats.

That leads to my biggest recommendation to the DMs out there as well as a big positive about this book. The recommendation is to read ahead. Read this thing from cover to cover and take notes. The Introduction actually says to do so and I agree. Now, a veteran DM will say that’s obvious. But, it’s not just about being familiar with the adventures; it’s about taking ownership of the material and truly making these adventures your own. There is a lot of space open for interpretation and customization here. I think this is fantastic!

The campaign setting is technically Greyhawk (I love seeing official support for the historic worlds) but the authors give you ideas for placing this campaign in any of the other official settings, or even your own. There are characters that need naming, there are locations to flesh out, there are side quests to take. Saltmarsh and its environs can easily be a full campaign setting on its own if you so choose. That is my biggest praise for this book: it exceeds what it promises.

Ghosts of Saltmarsh is well worth the cover price. You get seven quality adventure modules for less than ten dollars USD plus everything you need to run your own maritime campaign. Add the excellent production value on top of that and you have a great addition to your Dungeons & Dragons collection.

Keep an eye out for our full campaign write-up coming later this summer!