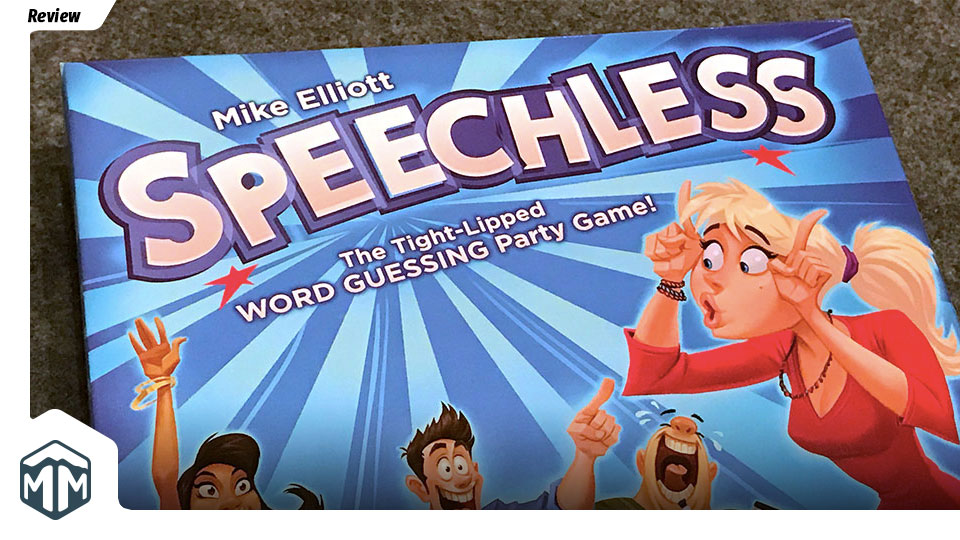 I think most people can agree that we often take this hobby too seriously. Don’t get me wrong, I love my long and deep games just as much as the next guy, but there is so much more to tabletop gaming than sitting around a table, in silence, for two to three hours. That’s what’s so beautiful about the hobby, it has something for everyone and every situation. Sometimes I do want to spend hours around the table, strategizing over a map, but often, I just want to grab some friends and have a good laugh instead. That’s totally fine!

If you haven’t guessed already, I’m going to be talking about the latter of the two kinds of games. 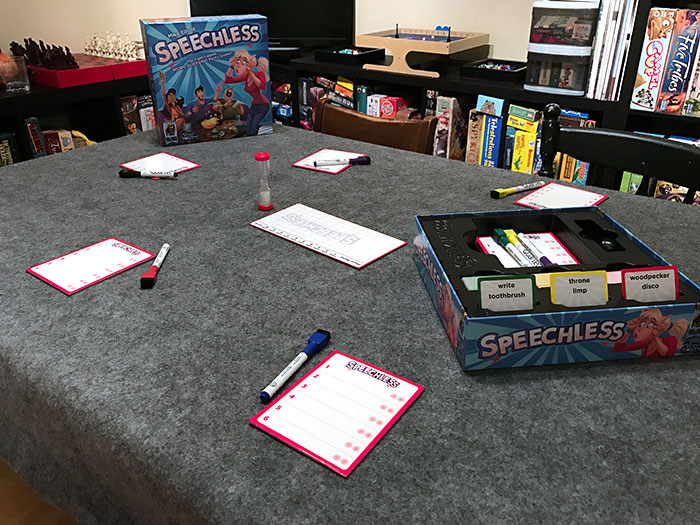 Arcane Wonder’s Speechless is that game you know, but don’t know at the same time. It’s familiar, but different. At face value, it is a simple charades game, but when you give it a shot, it has some clever twists up its sleeve. You might be surprised to learn that it was designed by prolific designer Mike Elliott who has worked on everything from Quarriors to Magic the Gathering. That just goes to show that even designers of deeper, serious games still love to have some light hearted fun!

During a round of Speechless, 3 to 8 players take turns miming out different words in an attempt to get everyone else to guess them. Each player will have at least one opportunity as the clue giver and will have 6 clues to give. When it is your turn, you draw a card from each deck (easy, medium, and hard) and then flip the timer to start the round. You then have 90 seconds to try to help each other player guess what your 6 words are. 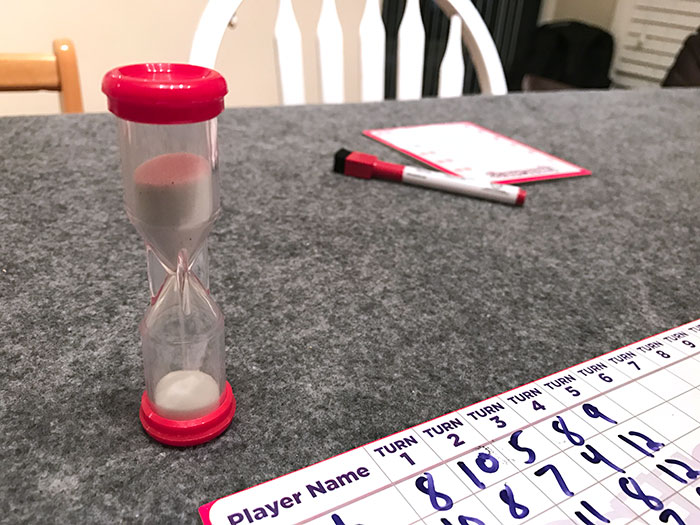 What separates Speechless from most charades games is that there are no teams. Each player has their own score and is ultimately trying to come out on top. Since everyone is supposed to be “speechless” during the round, you don’t have to worry about accidently yelling out an answer to help out another player. Each player has their own dry-erase player board where they will keep track of their 6 answers and how many points they score for each. 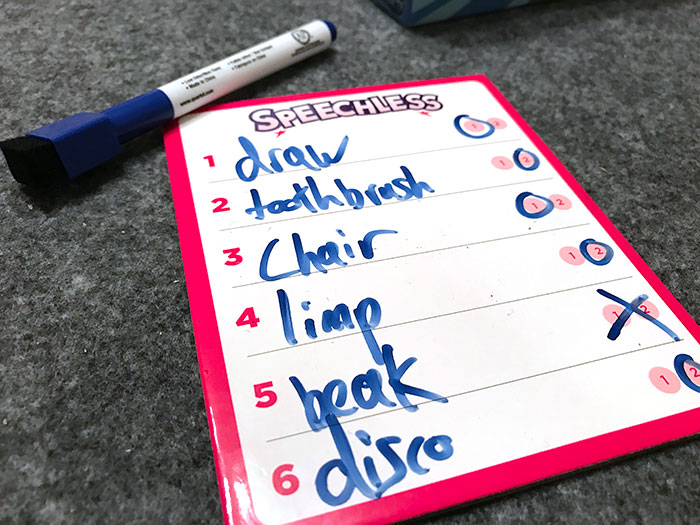 As a presenter, you are only limited by a few rules.

That’s pretty much it for the presenter! The audience also is not allowed to talk, but they can nod their head to show that they’ve got the answer and they can use their fingers to signal the number of the clues that they missed (if there is extra time). 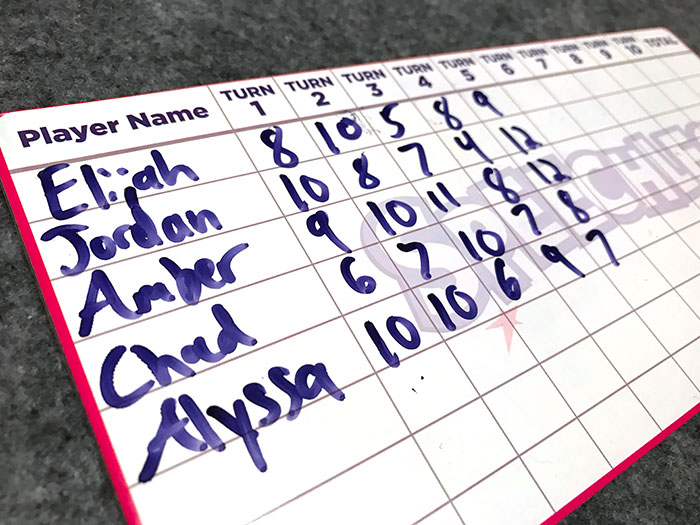 Once time has run out, the presenter asks each player what they guessed for each clue. If a player gets it right, they receive two points. If they get it wrong, but have a matching guess as another player, they get a single point. The presenter receives two points for each correct answer from the player who got the most right. Since there are no teams, this is a great way for the game to encourage the presenter to really want the players to guess correctly.

Speechless was a lot of fun. There is just nothing quite like seeing your friends act like fools over and over again! It is extremely simple to pick up and provides a ton of laughs. In the games that I played, we usually played one round with the normal set up (easy, medium, and hard cards) and then shifted to a more challenging approach by using only medium and hard cards. Once we switched things up, I think the game got even better! It is extremely flexible for different groups since the arrangement of cards can be swapped out so easily. Whether you are playing with kids and decide to use all easy cards or you play with adults and only use the hard ones, you’re going to have a good time. 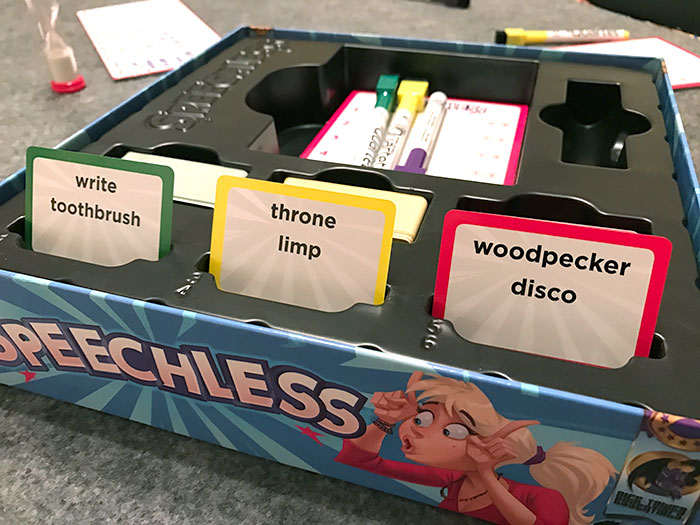 I also really loved the fact that you could get points for getting the answer wrong. This can create humorous moments on its own! When two players guess something completely off the wall, while all other players guess the correct answer, a very memorable moment happens. Seriously, we laughed so hard even just with simple things like this!

Ironically, my only complaint about the game was the fact that it does regulate complete silence during the actual guessing. I’m not a fan of forced silence in games because part of the reason I love games is that they foster communication and allow relationships to form over them. Luckily, the silence created in the game leads up to moments where everyone bursts out in laughter, mere seconds after the time is up, due to something that just happened in the round. Ultimately, the silence actually leads to more communication and laughter in the end.

Is Speechless my favorite party game of all time? I’m not sure. What I do know is that I thoroughly enjoyed it! Any game that can make me laugh as hard as this one does is a keeper for me. If you enjoy this kind of game or are just looking for something new, I definitely recommend that you pick up Speechless!

What do you think about party games? Is this the kind of game for you or your group? Let us know in the comments below! Also, keep an eye out for our next monthly game night where we’ll be giving away a copy of Speechless, donated by this month’s sponsor Arcane Wonders!