The Red Queen, the villain in Alice in Wonderland, was named after the queen in chess. In Wonderland, you’ll be playing as either Alice or the Red Queen battling for influence in a game that feels very much like chess condensed into a micro game.

Wonderland is an area control/hand management game by Daniel Solis and Renegade Game Studios that will only be available for International Tabletop Day 2018. Read on to see if you should pick up Wonderland during its limited release!

Wonderland is a two-player micro game featuring only 18 cards. One player plays as the Red Queen and the other Alice. Each player begins the game with cards numbered 1-7. The Queen will lay three cards face down in a row and Alice will place three perpendicular to the Queen’s. These cards then form a 3×3 grid where the remainder of the game is played. 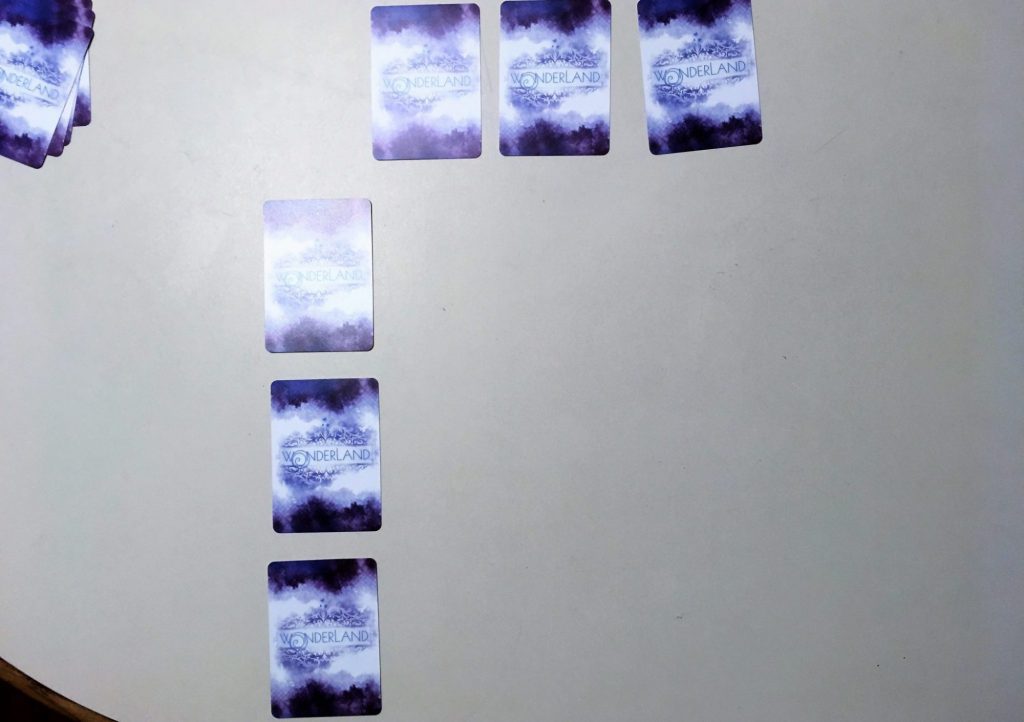 These will be the scoring cards for the game. In turn, players will play one card face up to add their influence to the grid locations. 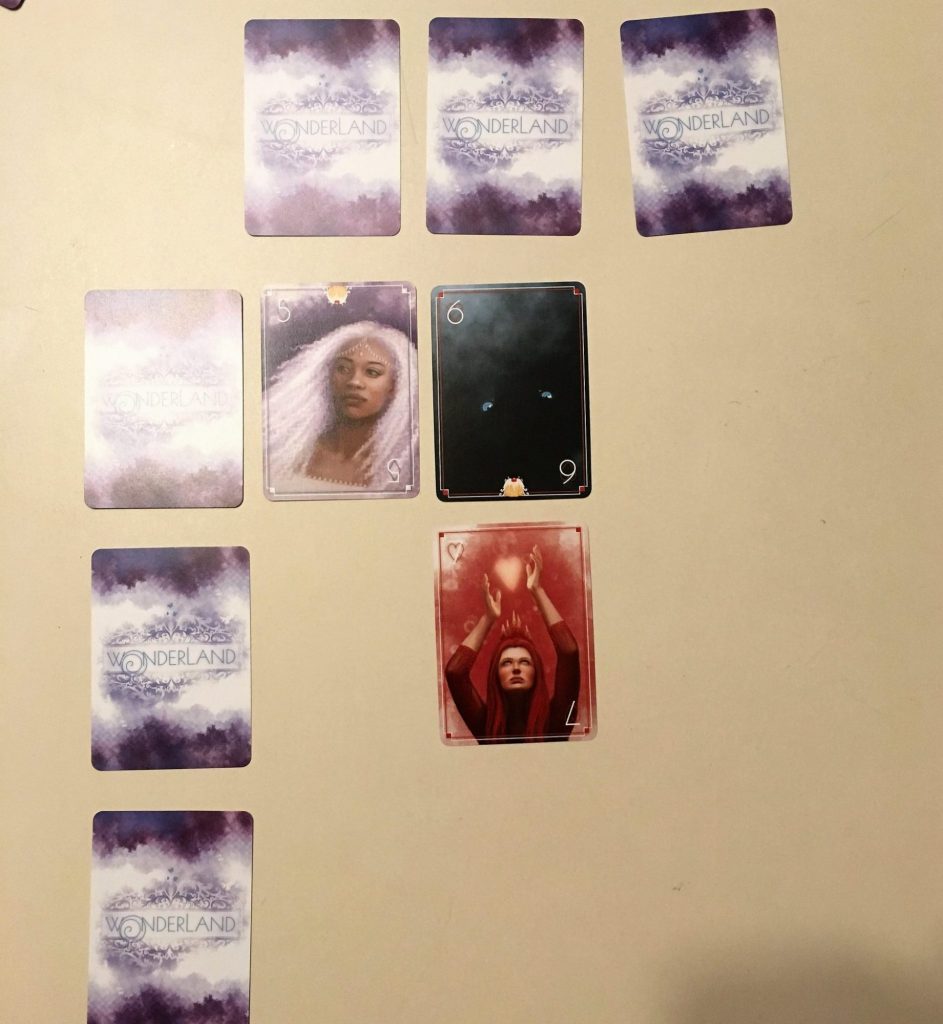 At the end of the game, players add up their points in each row and column and whoever has the highest total in each row wins the value of points on the card for that row or column.

There is one catch – certain cards have special powers. As you’re playing your cards some will either have a cake or a poison bottle on or more of the four sides. During scoring, if there’s a poison bottle pointing at your card, that card doesn’t score; if there is a cake, the card scores double.

Example cards with a potion bottle and cake

I mentioned that there are 18 cards in the game, but I’ve only talked about 14 so far (cards 1-7 for each player). Since the Red Queen always plays first, there is a variant that helps balance the gameplay for Alice. The final four cards are modifiers available only to Alice. After the other eight cards are played, Alice can place one of these four cards into the open space in the player board. For example, the Tugley Wood doubles the value of one card in the row or column it is played or the Tea Party, which lets you ignore a cake or poison on one card adjacent to where the Tea Party is placed.

Wonderland is beautifully illustrated and comes in a box, but also includes a bag to hold the cards. The cards are nice quality and the bag is a nice touch for the microgame.

An example scoring – The one on the right is up for scoring. The first card, white 7, would be worth 7 points for Alice, but there is a poison bottle beneath it so it is worth 0. Next, the red 7 is also worth 0 for the Red Queen since there is a poison bottle beneath it. Finally, the red 5 is worth 10 points since there is a cake pointing at it. As a result, the Red Queen scores the one point card on the left.

I’ve found that playing as Alice or the Red Queen doesn’t play a big role in the overall gameplay and I don’t have a real preference. Also, the variant of additional cards to give Alice a bonus tended just to slow down the game and give that player a bigger boost than intended.

The gameplay is incredibly quick – most games I’ve played have only taken about five minutes and I tend to play a best out of three, to lengthen the overall game. For a short game there are a decent number of interesting decisions, driven primarily by the cake and poison icons on the cards. As you and your opponent play cards, you can begin to puzzle out their strategy and determine the scoring cards they have played. 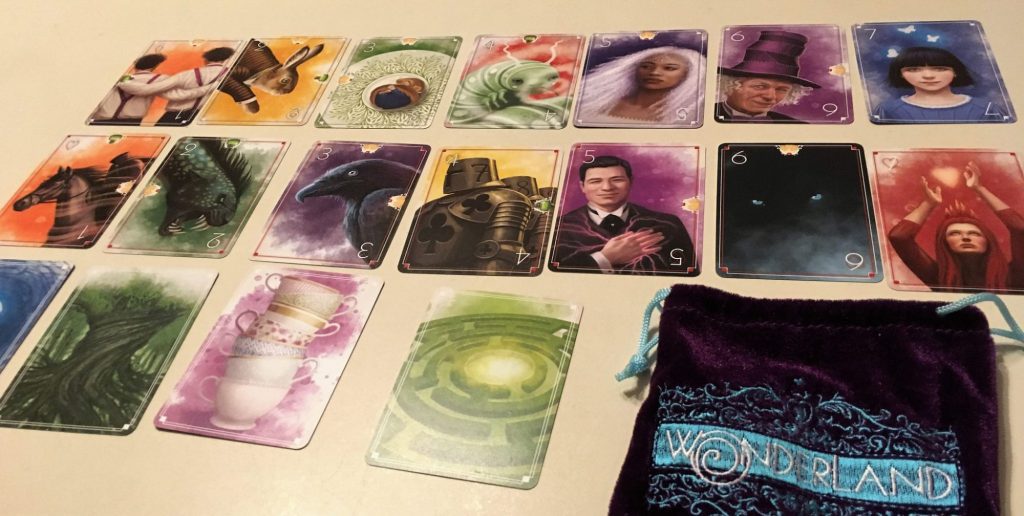 All of the components for Wonderland

Wonderland is the kind of game that anyone, gamer or not, can learn and can be played in nearly any environment. Overall, the gameplay is lighter than I typically go for, but if you are a fan of quick playing microgames, this is one I’d recommend you check out.