Tiny Towns Review – City Planning Has Never Been This Much Fun

The denizens of the forest of Lille are small in stature but big in heart. These miniscule woodland creatures love their homeland and they’re excited about the upcoming developments. A series of hamlets are to be constructed deep in the heart of the timberland and you’ve been handpicked to be mayor of one them. You’ll need to work with the available resources to construct a town that anyone could be proud of: cottages, farms, factories, warehouses, theaters, chapels, taverns, and even monuments honoring the achievements of those who helped make your land what it is today. Get your gloves and work boots on because it’s time to build some Tiny Towns! 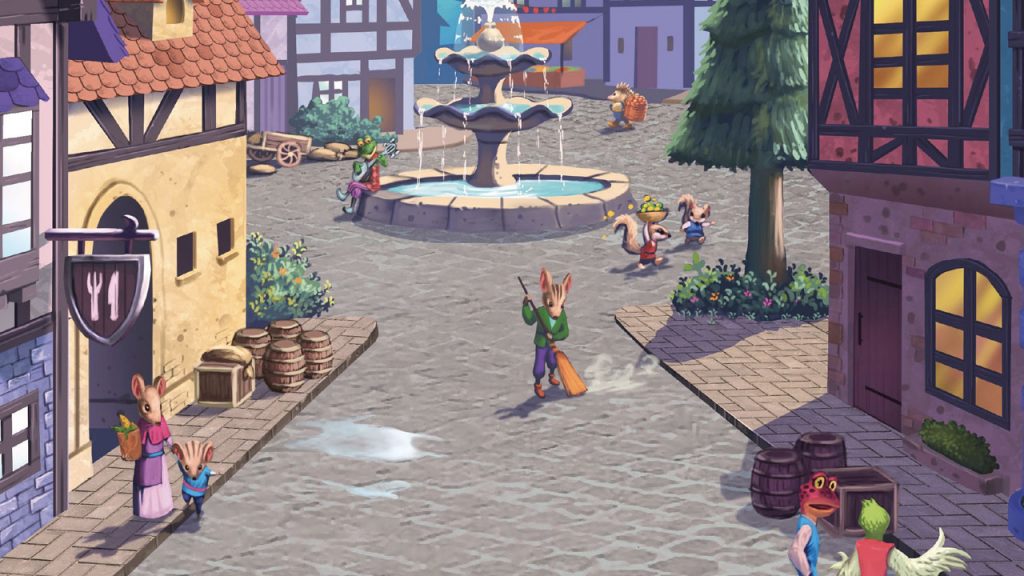 Tiny Towns is a small scale city building game with puzzly twists. Each turn one player will select a resource (wood, wheat, brick, glass, or stone), and every player must place that resource somewhere on their 4 x 4 town board. As each turn occurs, players will attempt to make arrangements of resources which will allow them to construct one of 8 different buildings within their town. Once you meet the blueprint requirements of a specific building, remove all of the corresponding resources from your board, and place the building piece into one of the vacated squares. Continue in this fashion until all players have filled their town boards. Remove any resource cubes which can’t be used to construct a building, then score for each type of building in your town. The player with the most points wins. 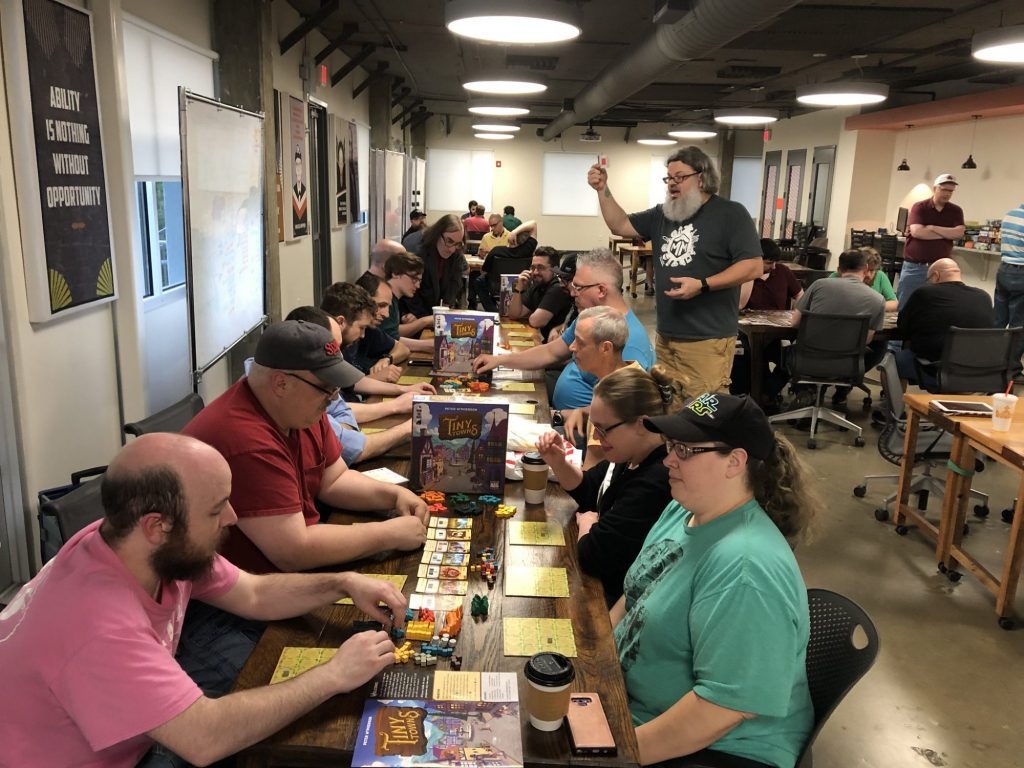 That’s really the entire game of Tiny Towns, and I don’t really need to spend any more time telling you how it plays. When I teach this game, I work backwards from the goal, which is to earn the most points, by constructing buildings. The buildings, as represented by the 40 cards, are the beating heart of Tiny Towns.

The Noble Art of City Planning

One of my favorite types of games are ones which offer variety in the form of card set creation at the beginning of the game; the selection of which both limits and informs the entire course of play. One of my personal favorite examples of this is Automobiles, also an AEG title, by designer David Short. In Automobiles, as in Tiny Towns, players choose a single card from multiple distinct sets, each with a different focus. These cards will represent their respective sets for the entire game.

The wooden pieces in Tiny Towns are great, and the first player marker is a hammer!

Each set of cards can be easily identified by an icon on both the color coded back of the card, and the top right corner of the face of the card. With the exception of the cottage card, each set in the base game contains 4 choices. And since you’re only selecting one from each set, the combination of cards you might play with in any game is pretty high…hundreds of unique combos at the least. As we take a quick look at the building cards, I’ll use the name of the card from the recommended beginner’s set

Cottages are where your residents live, and in most cases must be “fed” to earn points. These buildings are generally at the center of a network of points that begins with Farm buildings and extends into Wells, Chapels, and other buildings. 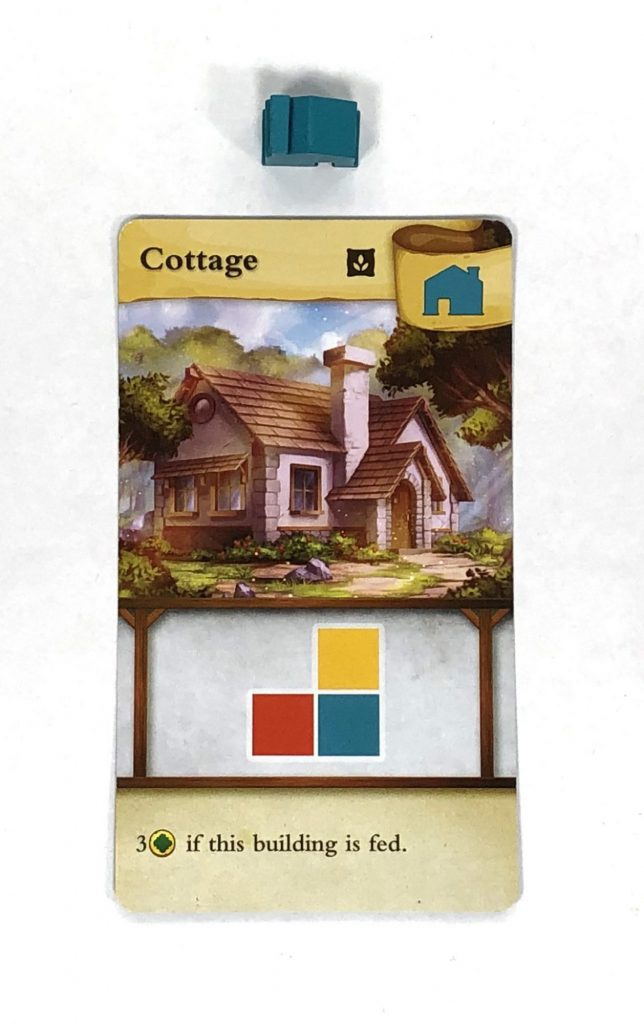 The Farm, Granary, Greenhouse, and Orchard all serve to feed Cottages but are not themselves worth points. The primary differences between these buildings is how they connect to a Cottage. The Farm card feeds 4 Cottages anywhere on the board, while the Granary only feeds Cottages in the 8 squares directly surrounding the game piece. 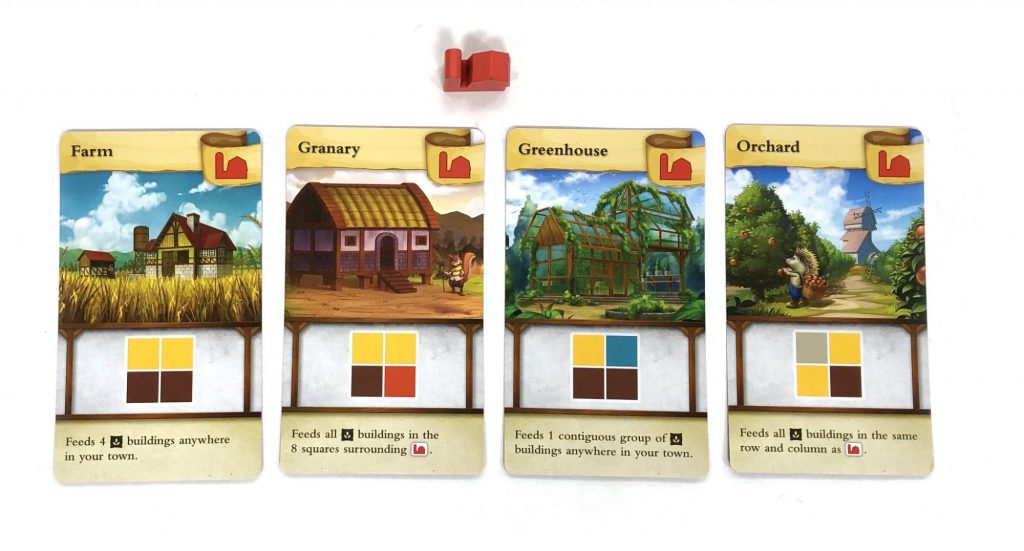 The Fountain, Millstone, Shed, and Well are versatile pieces which can offer good point generation for clever players, but each piece has some gotchas about how many points they can earn; for example each Well provides 1 point for every adjacent Cottage. These buildings only require 2 resource cubes to construct, which makes them quite flexible. 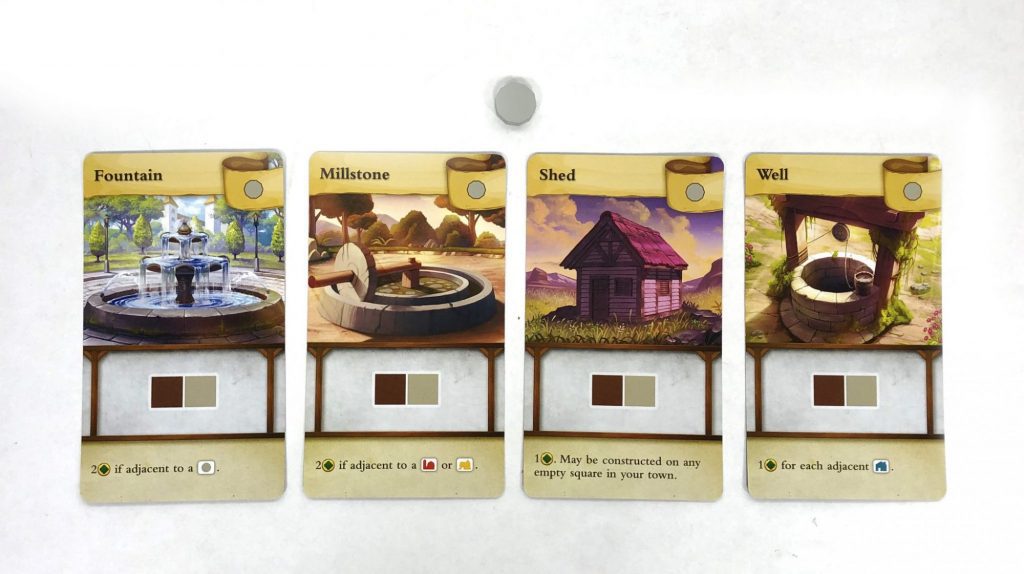 The Abbey, Chapel, Cloister, and Temple also provide point chaining for Cottage pieces, but include some tricky requirements which force players to pay attention to where pieces are placed. The Temple needs to be placed near at least 2 Cottages to be worth any points.

Public houses are the heart of many a small village. The Almshouse, Feast Hall, Inn, and Tavern all earn their points based on the total number of them you have in your village, using a sliding scale. One will earn you 2 points, 2 will earn you 5 points, etc. However, each of them has different restrictions on placement that will affect their value. 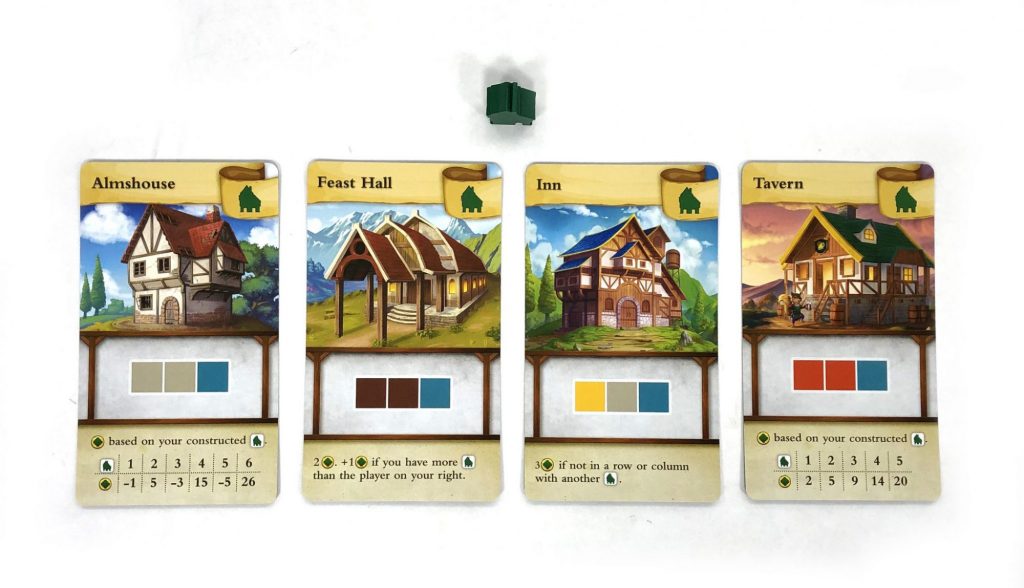 The Bakery, Market, Tailor, and Theater all provide services to the residents of your village, and offer the widest range of requirements to earn points from them. The Theater nets you 1 point for each distinct building in the same row and column as the Theater, while the Bakery only earns you points if it’s next to a building with a Farm or Factory icon. 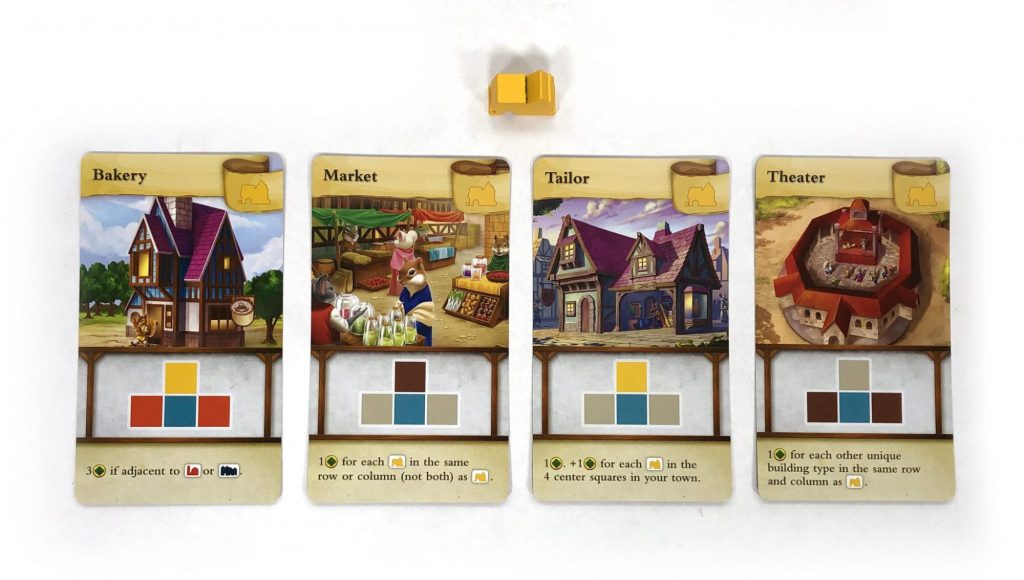 The Bank, Factory, Trading Post, and Warehouse are workhorse style buildings which can be worth positive or negative points, or allow you to mitigate the chance of other player’s selections. 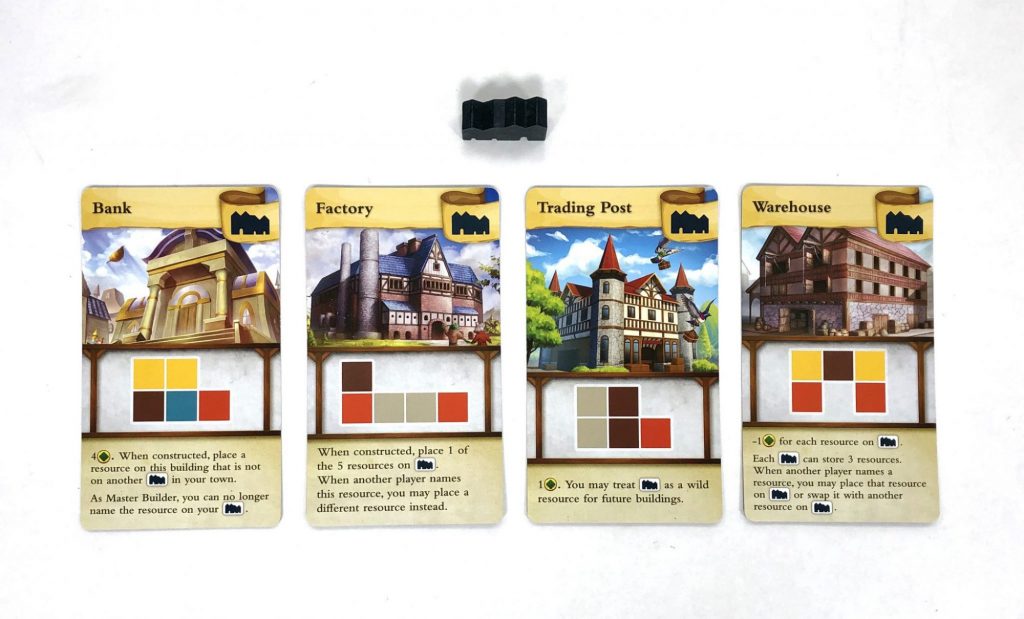 I haven’t spoken about Monuments yet, but they’re a really neat feature of the game. At the beginning of the game each player gets two monument cards, selects one, and returns the other one to the box. There are 15 monument cards and each one is unique; they all provide some special ability that will not only provide a lot of points, but can also give you a specific direction to focus on. 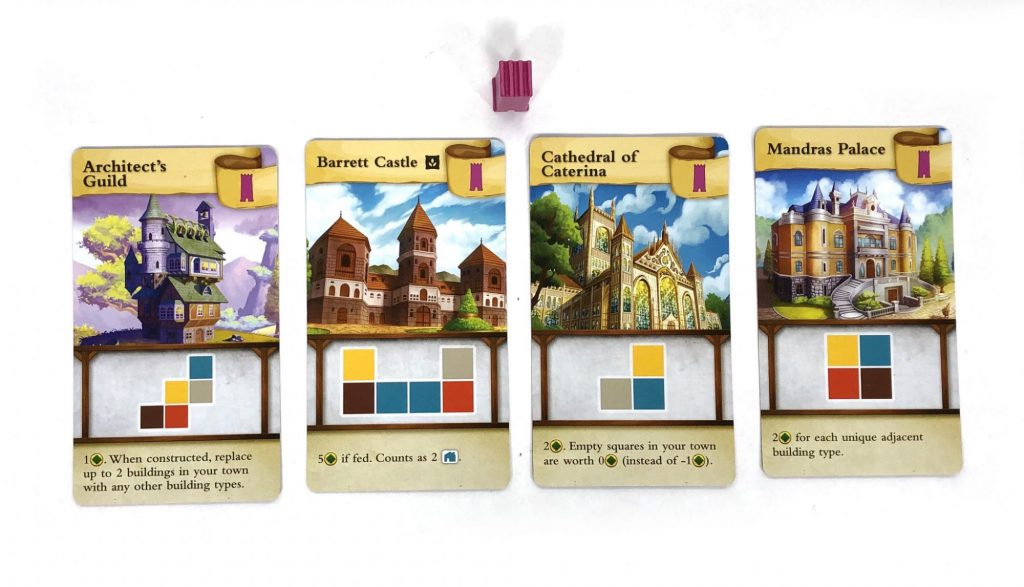 The first I heard of Tiny Towns was at Pax Unplugged 2018. One of our writers, Ashley Gariepy, got a chance to play it with the designer Peter McPherson at the AEG booth. In fact Tiny Town was one of the highlights of the show for her. 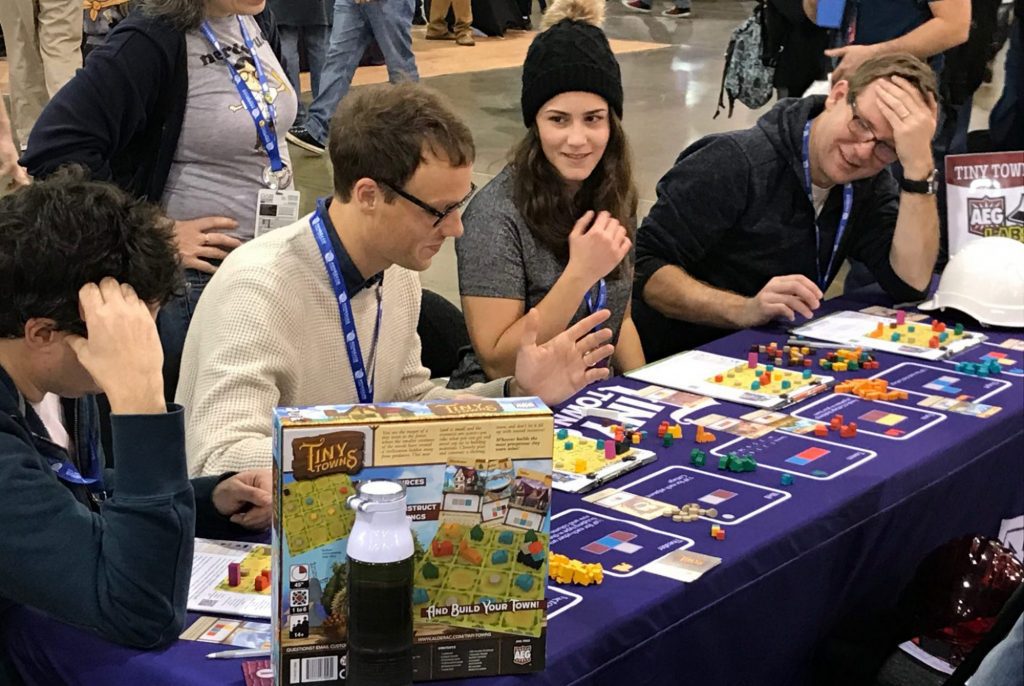 This photo from Pax Unplugged shows Ashley puzzling through a game of Tiny Towns with Quinns from Shut Up & Sit Down.

Since then I’ve gone on to play Tiny Towns a number of times, and teach it to others even more. I even led a large Town Hall style game where I taught 15 people simultaneously (using three copies of the game).

Our Tiny Towns tournament was a huge success; 20 people got to play, and these two chaps were lucky enough to win. Thanks for sponsoring #Nashville Game Night @alderac!

Tiny Towns has the potential to be a breakout hit for designer Peter McPherson and publisher AEG. It’s puzzly but not too hard, clever without requiring too much of a player, and has a player count from 1-6 but still takes less than 20 minutes! Not to mention that the artwork is engaging and fun, the pieces are colorful and chunky (with interesting shapes), and it’s just a blast to play. The simultaneous placement means that games move along smoothly, with very little down time. 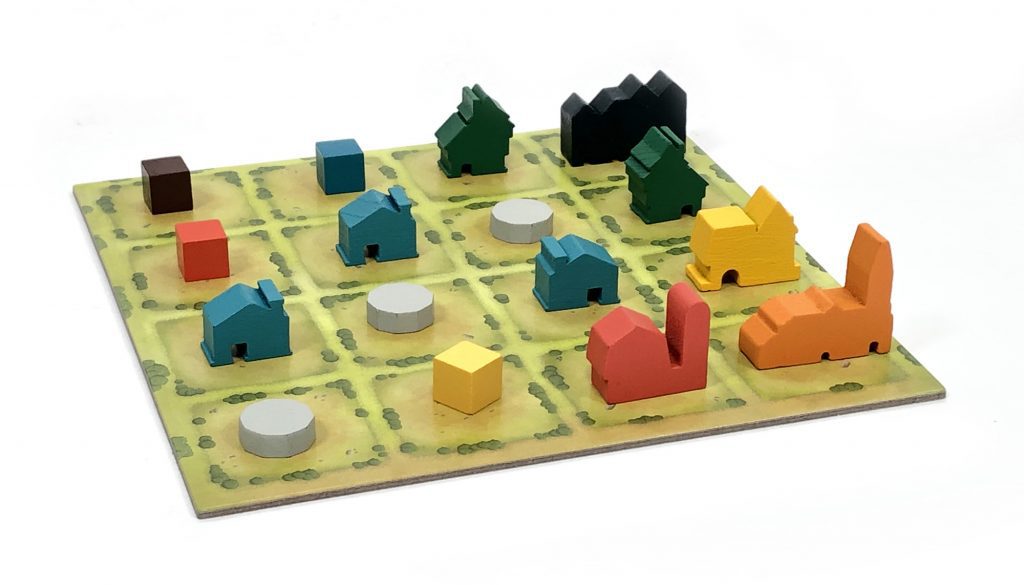 I did have a single negative comment about Tiny Towns, but it’s barely a blip…in fact it’s more of a recommendation. In Automobiles, AEG presented a dozen or so premade “sets” of cards that players could select. These sets were named for the attributes of the cards which made them up. It would have been really great if AEG had done that with Tiny Towns. Instead they have the “beginner’s set” and nothing else. That’s not a big deal, but it would have offered a bit of guidance and direction for players looking to experiment with other building cards.

One thing I found amusing; for a game called Tiny Towns, the box is the size of Ticket to Ride. However once you open it up and see that it’s chock full of these amazing pieces, you’ll forgive Tiny Towns. Especially since it means there’s more room for expansions. 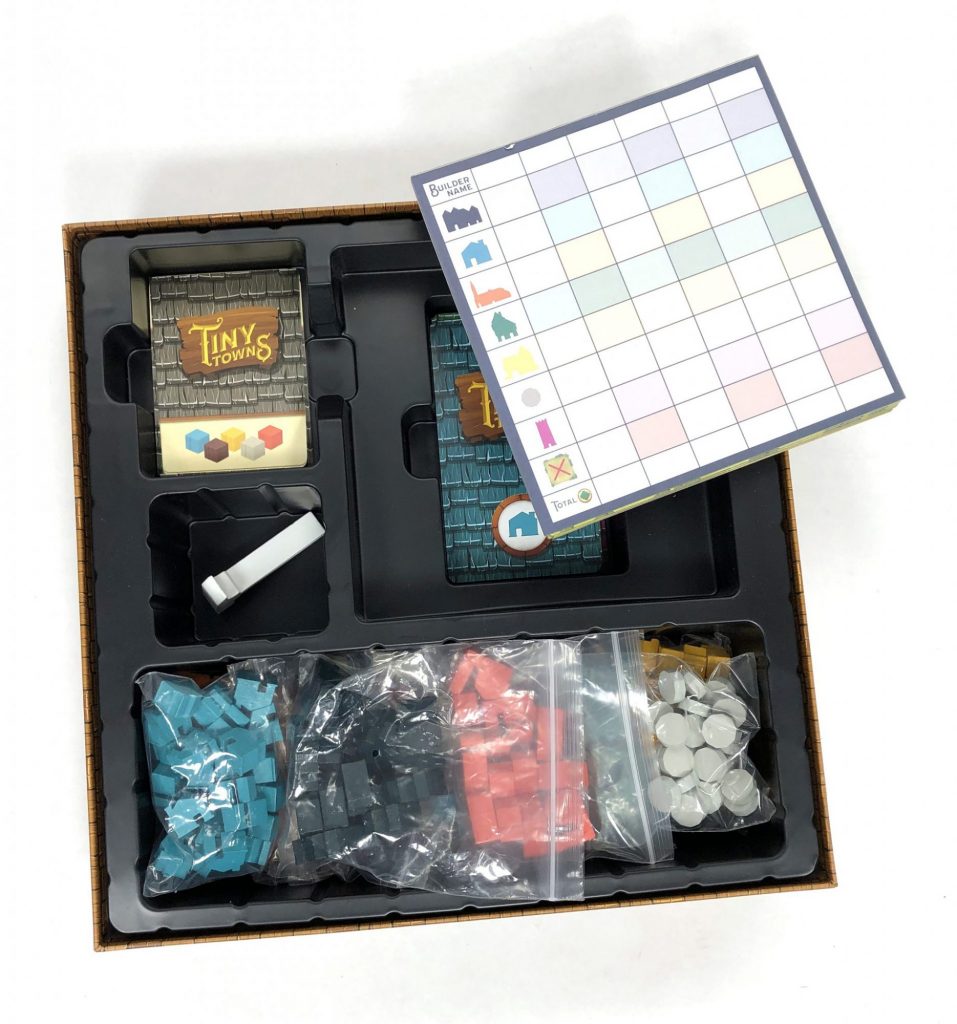 And I think expansion content is what will really boost Tiny Towns to the next level of perennial gateway game status. It’s already great, but because Peter and AEG have built this scaffolding around the core game, they could very easily include new pieces, extra cards, and rules, with minimal effort but with an inversely large impact.

If you’re interested in a bit of background information about the development of Tiny Towns then check out our interview with Peter McPherson, the designer.

Tiny Towns is out in stores now, and you should absolutely make the time to try it out.