I’ve never been a big fan of pure deckbuilding games, primarily because the central process of cycling through and creating an optimal deck full of goodies has never particularly revved my engine. I want my deck of cards to be more dynamic than using it to get better and better stuff.

Because of my general indifference to the pure deckbuilder, I gravitate toward games that utilize the deckbuilding mechanics in interesting ways, often to the point where the deckbuilding itself takes a back seat. Time of Crisis, A Few Acres of Snow, and Xenon Profiteer are a few examples of standouts for me.

I like maps. I like maps with my deckbuilding. Super Motherload has a map of one of my favorite things: a mine. Mines are fun; they’re like digging for treasure, and Super Motherload captures that feeling by giving players the ability to dig up goodies on every single turn. 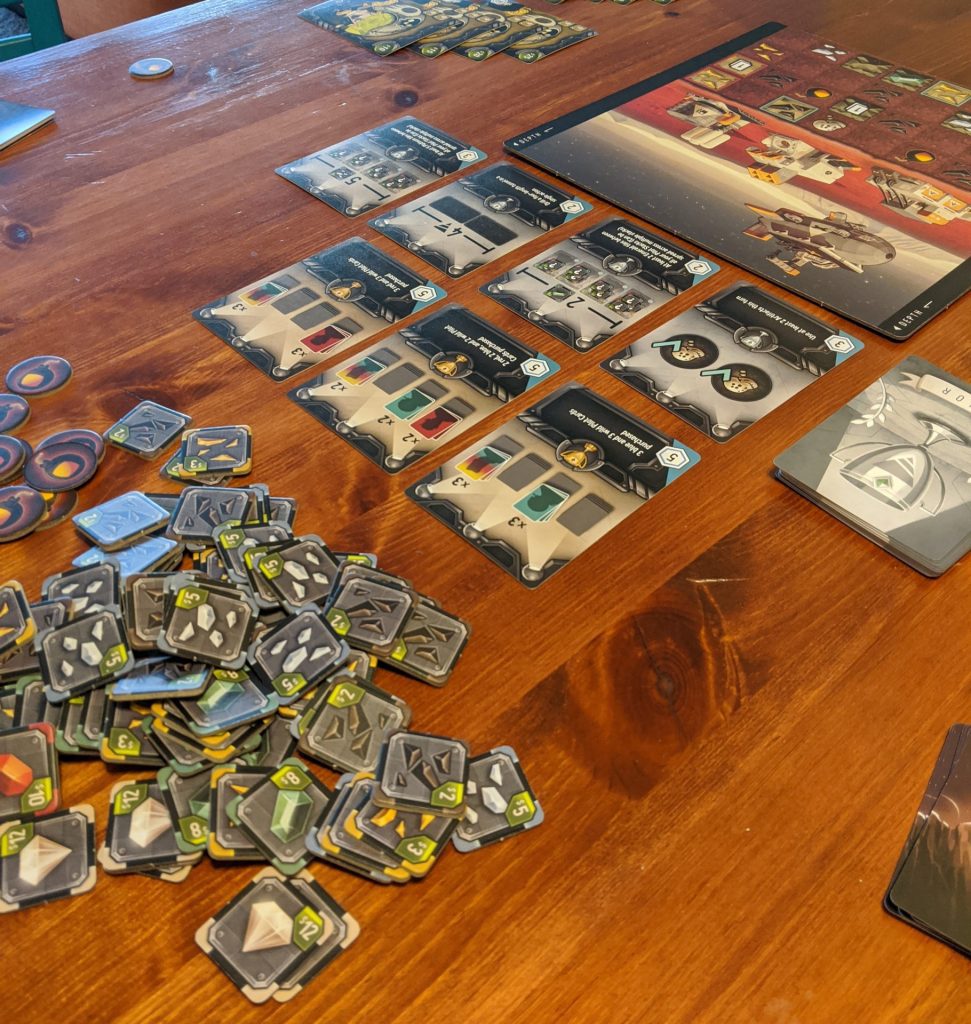 Oooo, look at all that promise

As I mentioned above, Super Motherload is a deckbuilder, which is a style of game that tasks players with constructing a deck full of powerful and effective cards from a humble beginning. Generally speaking, you start skinny and fatten the thing up. In typical deckbuilders, there is a “market” of cards that players make purchases from, adding the purchased cards to their deck to increase its strength while also trying to avoid making it too bloated.

Super Motherload eschews a traditional market, instead giving players the same four stacks of four cards each. Each stack starts at a cost of $10 and increases in increments of $5, with the final card costing $25. The cards in each stack must be bought in order and the cards give better and better abilities as you go. 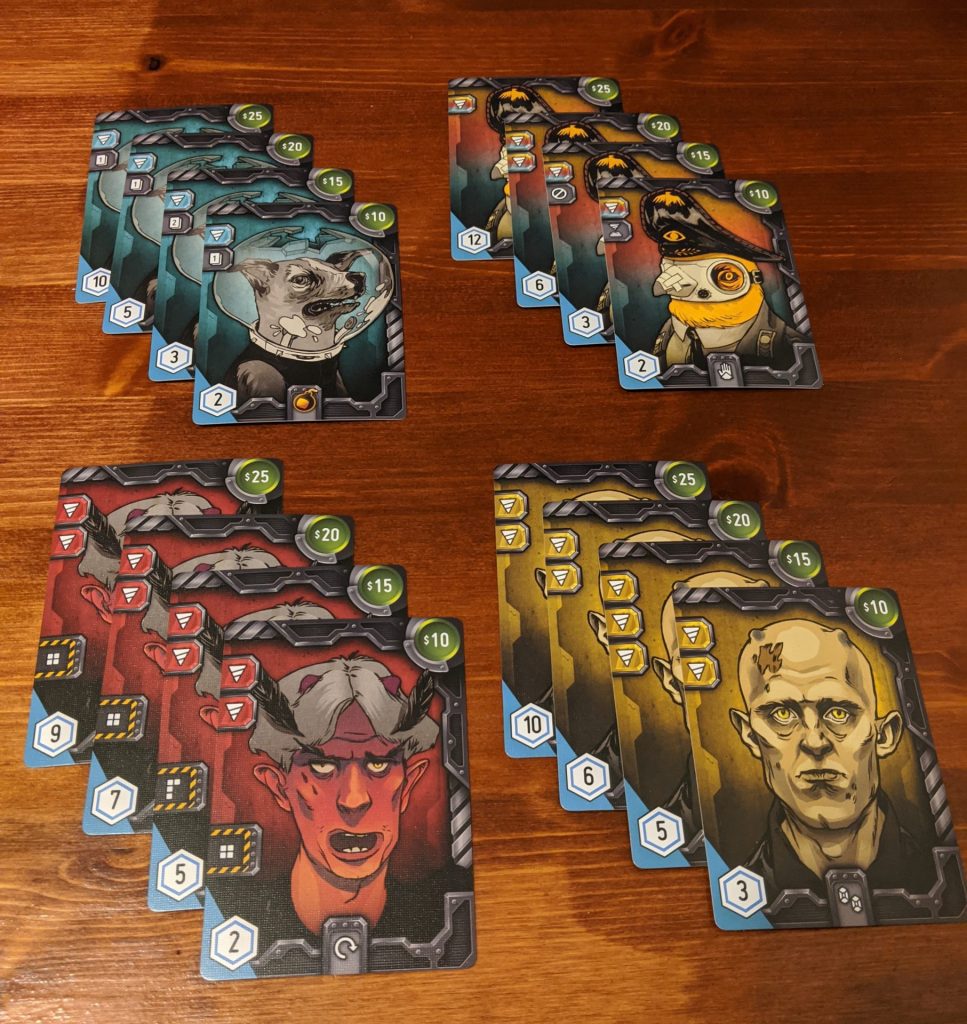 Pic of one player’s’ individual marketplace

There are two economies in the game—a currency economy and an action economy. Each player gets two actions per turn selected from three options: draw, drill, and bomb.

Everyone shares the same tunnel infrastructure in the game, so the decisions revolve around trying to get the most efficient use of your two actions and your hand of cards while also timing things properly so the other players don’t get all of the best goodies before you. 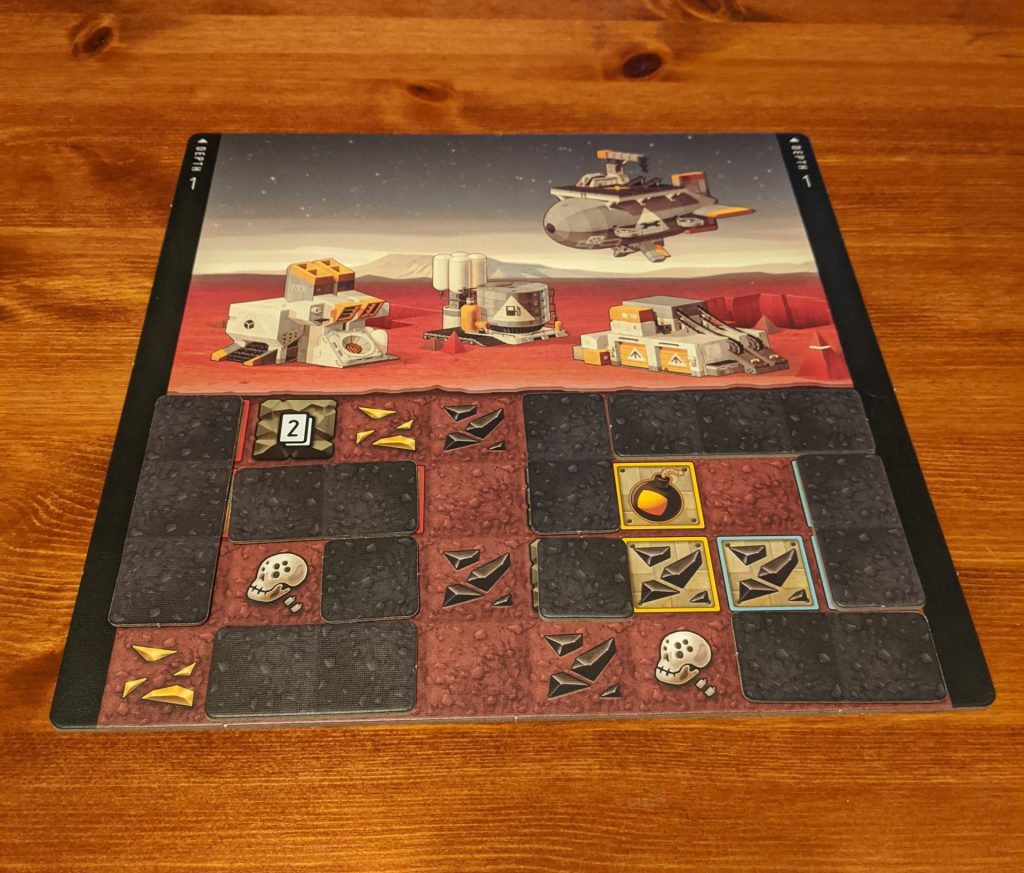 It is satisfying. Getting to pull off a cool drilling or bombing maneuver that scores you a bunch of new cards (bought cards and objective cards give you points in the game) feels really good. The basic psychological thrill of the deckbuilder—that of getting money to get more stuff, which you then use to get more money and more stuff—is a great little dopamine loop.

The game works at a pretty fast pace too: once players have tunneled over the little skulls on all the scrolling boards (did I mention that there’s a little scrolly video game feeling to the board as you dig deeper and deeper?), the game ends and you tally up your points.

Not quite a diamond drill, but close

My main criticism of Super Motherload has to do with arcs. I find that the majority of deckbuilders I’ve played have trouble with creating a feeling of progression. I’ve never felt particularly thrilled by doing the same operation over and over again while getting to buy a slightly better card or get a new, slightly altered set of abilities. As unique as the marketplaces in Super Motherload are, it boils down to a similar process.

My favorite games often have you doing very different things in the beginning, middle, and end of the game—but because Super Motherload is a game about digging, rinsing, and repeating, I never really feel the satisfaction of progressing through different hoops or obstacles, jockeying for position with the other players.

I don’t think that this is actually a critique of Super Motherload, but rather a critique of deckbuilders in general. The game is quick, light, and very cute. If you’re looking for a deckbuilding experience with a fun spatial element, give this one a try. As for me, I’m going to continue trying to find a deckbuilder that revs my engine.