Expanding Universes With a Handful of Dice

Greetings you Scruffy-Looking Nerf-Herders! Welcome to another installment of Retro RPG Reviews! This time we’re opening up the databanks on the classic Star Wars: The Roleplaying Game. So grab that Crown Royal bag full of d6s and make the jump to hyperspace!

A Galaxy of Choices

Today, if you want to play a Star Wars game, you have your choice of any number of games ranging across spectrums of mechanics, quality, and complexity. Fantasy Flight Games alone has three separate (though compatible) roleplaying games set in the Star Wars universe, not to mention the four tactical miniatures games, three card games and a dice game!

However, there was a time when there was only one Star Wars game that mattered. Before that the only Star Wars games were cheap board games aimed at children. But in 1987, four years after Return of the Jedi, a small roleplaying game publisher, West End Games, capitalized on the success of their Ghostbusters RPG and secured the RPG license for one of the most successful movie franchises in history.

Designed by Greg Costikyan, Star Wars: The Roleplaying Game allowed players to expand the universe of Star Wars and West End Games was given a surprisingly lenient amount of creative license with it. This would have a profound impact on Star Wars media that resonates even today.

The rules system, which greatly expands the Ghostbusters RPG’s d6 system, was only the second game to use the concept of a dice pool. A dice pool mechanic is where a number of dice, rather than a single number or modifier, represent how proficient a character is at something. For example, if you need to fire your blaster, you would roll the appropriate amount of dice (all six-sided or d6s) and add them up to beat a certain difficulty number. If you do, you are successful! 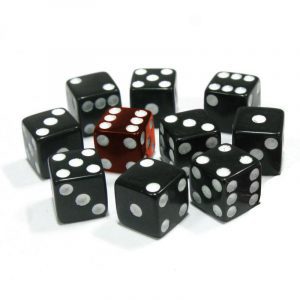 In the d6 system, one of your dice from your dice pool is a Wild Die. Each time a 6 is rolled on a Wild Die, you get to roll it again, adding the extra result to your total. If you roll a 1 on your first Wild Die roll, then the Gamemaster (GM) has a few options to either penalize or introduce complications to your action. The goal here is to create a sense of luck, fate, or the Force’s will.

There are also mechanics for altering your rolls to create successes. Character points let you add another Wild Die (without the negative consequences) to your dice pool. Force Points, which are much rarer, allow you to double your dice total.

The elegance of the d6 system is that every facet of the Star Wars universe could be covered by it. Does Han need to fly through an asteroid field? roll 7d6. Does Lando need to persuade his way out of a tight situation? Roll 9d6. Does Chewie need to rip someone’s arms out of their sockets? Roll 10d6. Even the Force is divided into three separate Force Disciplines, each with their own dice pool: Sense, Control, and Alter. Some basic Force powers only require one of these, some more complex ones require a combination.

Characters in Star Wars: the Roleplaying Game have a vast amount of customization options because unlike many other games you are not defined by a specific class or occupation. Instead, your character has a template that provides a general framework for what that character should be able to do. The Revised Second Edition of the game has 20 predefined templates to help you get started that include many of iconic character types like smuggler, pilot, and Jedi. However, you are free to customize these templates or to create your own. For example, the default smuggler is human but you can switch that out for another alien species (eight are included in the core rulebook) or you can even be a droid! You could also switch out skills to change your smuggler from a skilled mechanic into a cunning gambler. The possibilities are limitless.

A Long Time Ago, in a Town Not Too Far Away…

After Return of the Jedi came out, the epic fandom was hungry for more stories and adventures, but nothing came. George Lucas and Lucasfilm had moved on to other projects and so, many of the kids who had grown up with it moved on to other things as well. I was one of those kids. I was five years old when Jedi came out and played with my action figures at least until ten, but then I found other things to occupy myself – specifically comic books and RPGs. 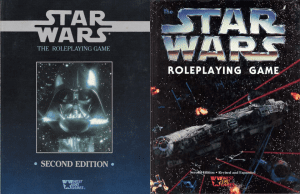 For a decade, I was focused on D&D, Ninja Turtles, and superheroes. Those Star Wars figures were put away safely in a closet and Star Wars was something that we watched when it came on tv (yes, primetime television used to show movies!). Then in the ancient year of 1991, Timothy Zahn came out with Heir to the Empire, the first in his legendary Thrawn Trilogy of novels that revived the stories of the Skywalkers and sparked the embers of the resurrection fire of a titanic phoenix. I picked Heir to the Empire up at our little town’s library and devoured it. I had forgotten how great the Star Wars universe could be! Hungry for more, I spotted the listing for a new edition of a Star Wars RPG in a comics catalog. Not only was there a Star Wars RPG, but it had been around for five years and a new edition was coming out! I ordered it on the spot.

Little did I realize that I had it all backwards… 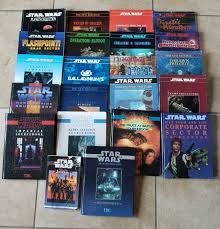 Lucasfilm had very little interest in the continued world-building of Star Wars after Jedi came out. Legends abound that the toy manufacturer Kenner was desperate to keep the torch burning with brand new concepts. They were all solidly shot down and the toy line dried up. So, when West End Games was given Lucasfilm’s approval to create new content for the game, it was a surprise to the fans. Some content creation was obviously needed like alien species names. Many of the classic Star Wars species (Twi’lek, Rodian, etc.) were first labeled in this game! But, whole new concepts and details (like the names of the denizens of the Mos Eisley Cantina)1 needed to fill in the gaps left by the movies were created as well. By the time the game had ended its run, there were over 100 sourcebooks and adventures published that brought this universe really to life and Lucasfilm adopted it willingly. 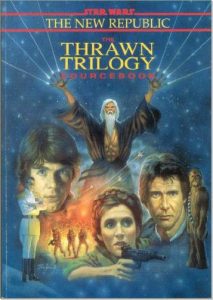 By the time Timothy Zahn was writing Heir to the Empire there was so much content that Lucasfilm sent him a box of RPG books with the direction to make his novels fit in with the RPGs!2 This was the beginning of what became known as the Star Wars Expanded Universe. Many world details that later appeared in the Star Wars prequel trilogy first appeared in either the RPG or Zahn’s novels and still persist to this day even after the post-Disney-purchase canon restructure. Pablo Hidalgo, head of the Lucasfilm Story Group, cites it as an inspirational element for their Story Bible which lays out their new canon.3

Unfortunately, West End Games declared bankruptcy in 1998. This was just as the Special Editions of the original trilogy, which would feature newly added details gathered from the Expanded Universe, were just getting underway. There was never an official sourcebook for any of the Prequel Trilogy, which also included more Expanded Universe content. The license would be picked up by Wizards of the Coast for their d20 system in 2000 and then later by Fantasy Flight Games in 2012.

The subsequent games have been successful and well received in their own rights. Each has its strengths, weaknesses, and challenges. Yet, all along, the fan community around Star Wars: the Roleplaying Game has continued to to create and publish unofficial content. Conversions for new Star Wars characters, technology, and aliens abound on websites like The Rancor Pit. That long-lasting love for this game has given Fantasy Flight Games reason to produce an upcoming  30th anniversary edition.

Additionally, the influence of the d6 dice pool system continues to resonate throughout RPG design. Mega-hit games such as Shadowrun and Vampire: the Masquerade find their roots in this foundational dice mechanic. These games, in turn, have influenced the ways that modern games tell their stories.

Twenty-five years since I first picked this game up as a kid, I find myself going back to it whenever I want to play a Star Wars game. There’s no need to look any further, this game got it right on the first try.

As stated at the beginning, there is now a plethora of choices when it comes to Star Wars RPGs. But, only one has 30 years of history and a legacy of amazing worldbuilding. For that reason alone, you should seek this game out when looking for one that is right for you.

The Star Wars: The Roleplaying Game 30th Anniversary Edition can be pre-ordered on Fantasy Flight Games’ website at: https://www.fantasyflightgames.com/en/products/star-wars-the-roleplaying-game-30th-anniversary-edition/