Skyward Review – I Split. You Choose. We All Float.

It seems like the four nations have always been at each other’s throats and for awhile there, it looked like it would never end. The world was headed down a dangerous path and it would be a miracle if future generations even had anything that even resembled a world to grow up in. Fortunately, cooler heads prevailed. The political winds were blowing in the right direction. The right people were in the right places at the same time. And, frankly, the populace was ready for a change.

In a gesture of goodwill, our leaders have decided to build a floating city that will hover above the intersection of the four realms. It’s going to be a massive undertaking that could take decades to complete. It promises to be a marvel of engineering and a hub for the sharing of information, ideas, and prosperity and they’re calling it Skyward. Old enmities die hard, though. We’re all convinced we can do it better than the other guys, so it’s going to be interesting to see how “equal” it truly is in the end. On the one hand, I’m optimistic about the peace holding but, on the other, I can’t help but fear that this competitive atmosphere is going to just lead us right back to where we started.

Disclaimer: the manufacturer provided a sample to Meeple Mountain, but had no editorial input into this review.

Skyward, designed by Brendan Evans and published by Rule & Make, is an “I split, you choose” game in which the players are using their cards to launch buildings into their personal airspace in order to score the points that will hopefully win them the game. During each turn, the “Warden” will draw a number of cards, split them into stacks equal to the number of players, and then the players will take turns choosing a stack of cards to take. These cards are then available to be played into their airspace (playing area). Once someone has constructed 6 buildings, the game ends, the points are tallied, and the person who has the most wins the game and becomes the Founder of Skywarden.

This is, of course, a high level look at the game and if you’re not interested in learning how the game is played, then feel free to scroll down to the Thoughts section. For the rest of you…

Skyward is packaged neatly into a small box that contains a central game board, a small rule book, a collection of small “Cog” tokens, a Warden token, and two decks of cards. There is a large deck which is comprised of 48 building cards, 28 faction cards, several vehicle cards, and a few critter cards. The second deck is a small expansion pack for the game which I am not going to be discussing in this review. The cardboard is nice and thick and the cards have a nice snap to them. 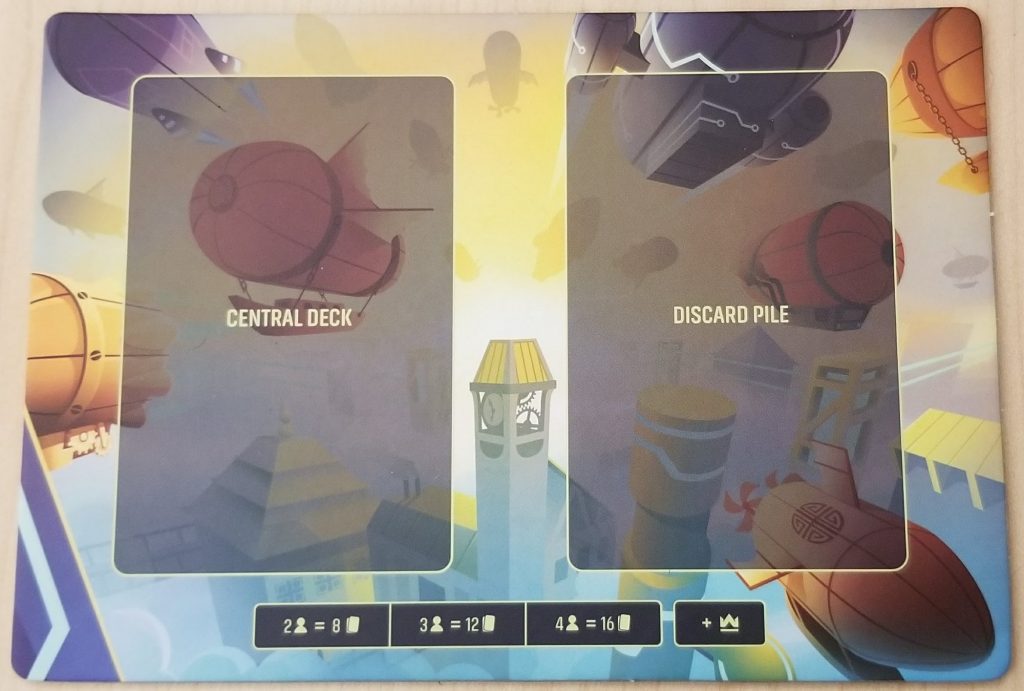 My only complaint about the components is that the game does not include a plastic bag to hold the tokens in. It’s very disappointing when publishers neglect to include any kind of storage for the small bits. It’s a cardinal sin and for me, it’s almost unforgivable. Plastic bags are super cheap and there is no good excuse for a publisher to neglect even adding a single one to a game that has loose pieces. None. At. All. But, I digress…

The Setup, the Split, and the Selection

The setup for Skyward couldn’t be any easier. The game board is set out along with the pile of cog tokens and the Warden token. Next, the cards are shuffled and placed face down into a pile and a starting player is selected. Then you’re ready to begin. 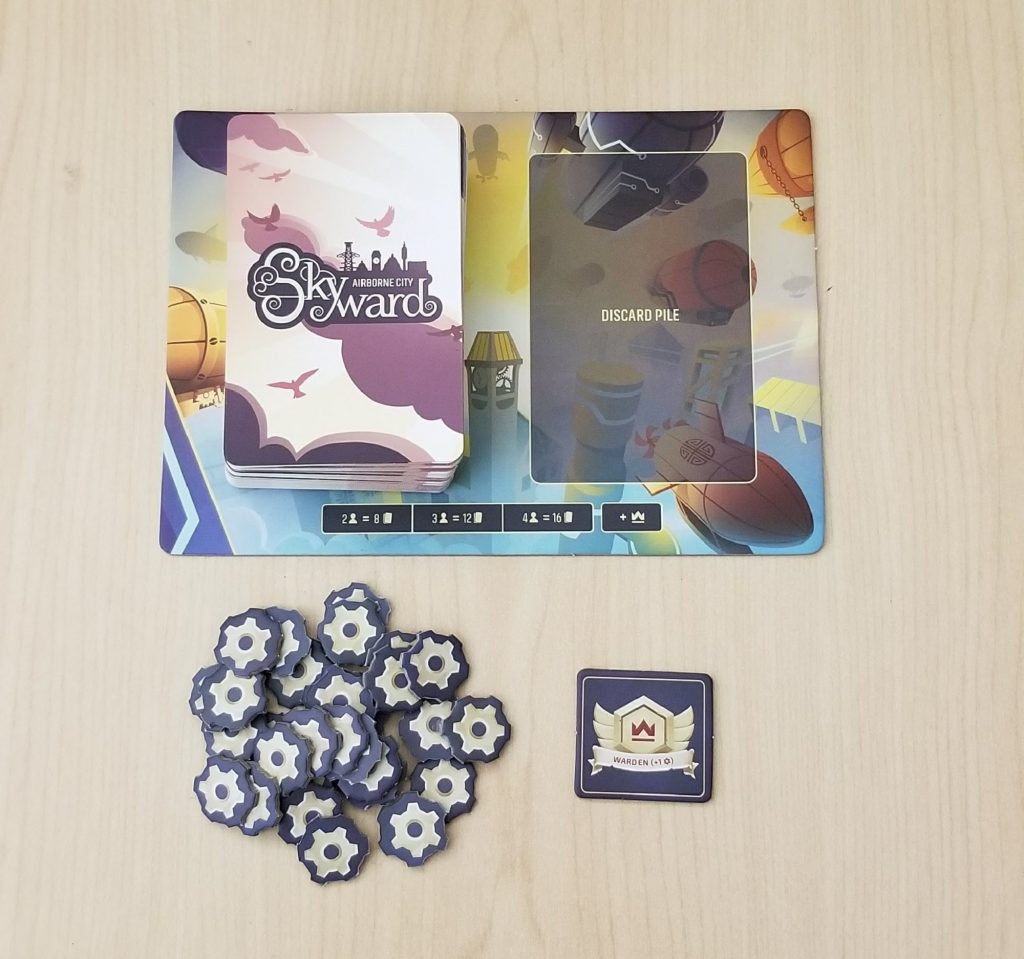 At the start of the round, the Warden will draw a number of cards which will be split into a number of piles equal to the player count. One of those piles must contain the Warden token. Then, starting with the person to the left of the Warden and moving clockwise, each player will select one of the piles to keep and take those cards into their hand. If they take the Warden token, they will also receive a free cog token. The person that created the split always chooses last.

Playing Cards Into Your Airspace

Each card has a cost associated with it that’s shown on the left side of the card. These costs are represented by icons that match the resources provided by the different faction cards (of which there are four). There is also one wild symbol and any faction card can be used to pay for it. Cogs can be used as one unit of any color faction. 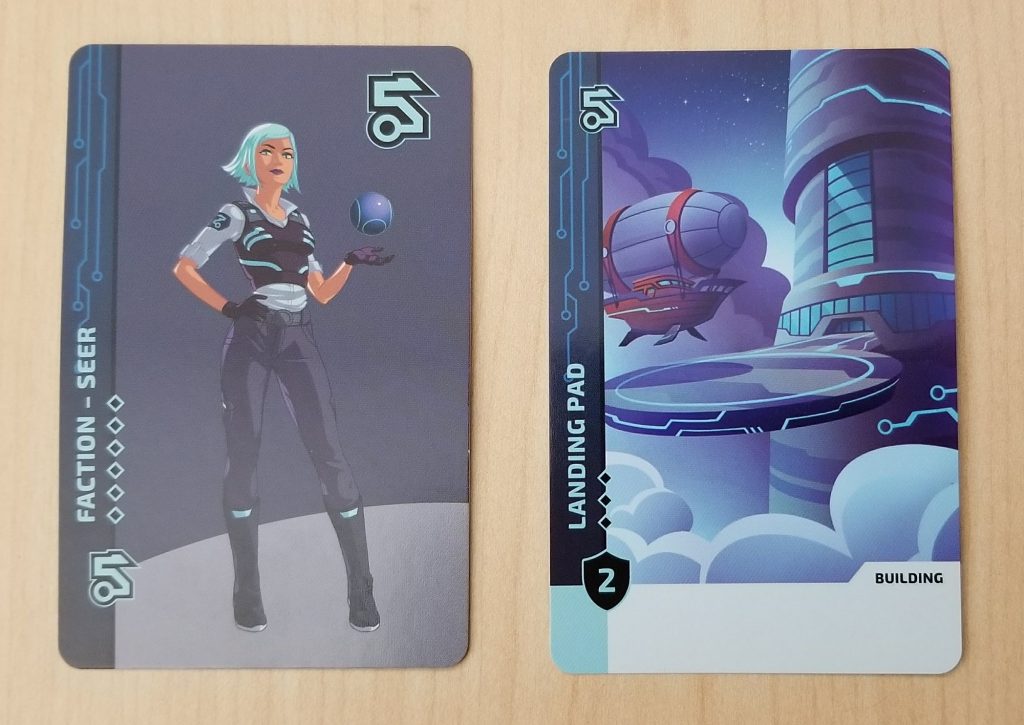 On your turn, you may play exactly one card into your airspace by discarding faction cards from your hand and/or cogs from your supply to pay the cost. Some buildings have effects which fire off as soon as the card is played:

Other have ongoing effects:

Others will affect the end-game score in some way: 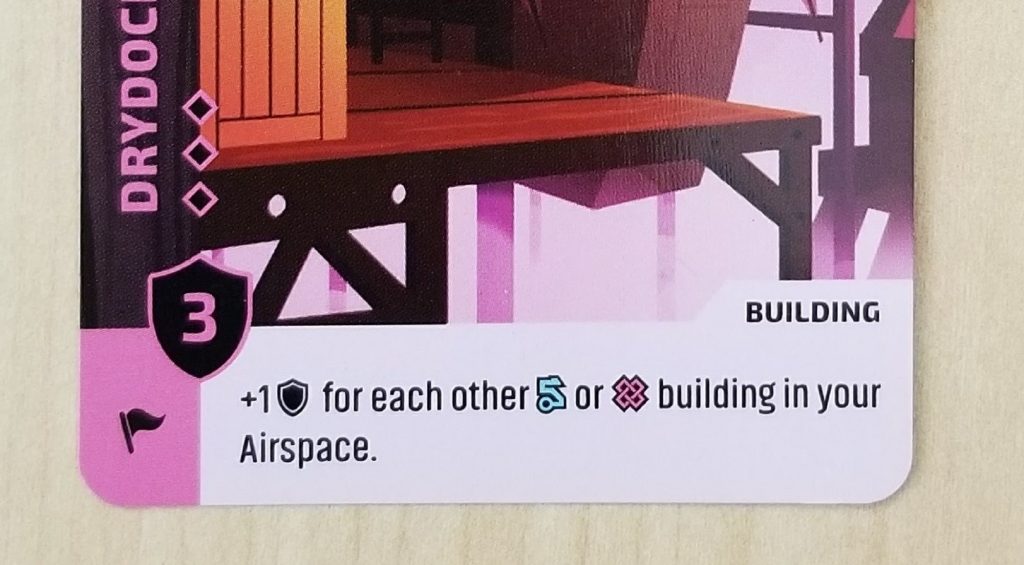 While others are just worth straight up victory points at the end of the game: 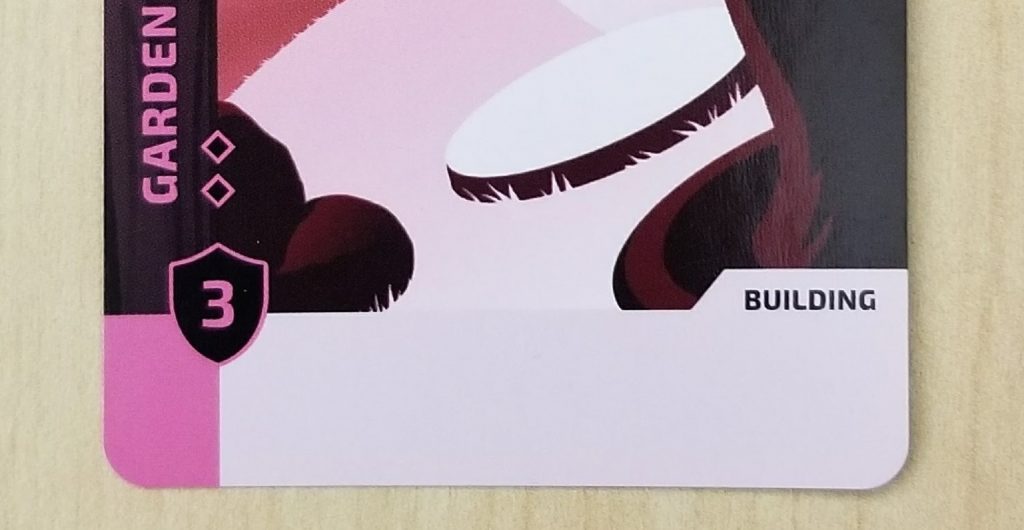 Any remaining cards may be held onto (up to a total of 6) for the next round or discarded to gain cogs at a 3:1 rate. The new Warden will always be the first one placing their cards during this phase and a new round begins once everyone’s had a turn.

A game of Skyward comes to a conclusion at the end of a round in which one of the players managed to launch their sixth building into their airspace or the deck of cards ran out. Then victory points are tallied to determine the winner.

Before I talk about the gameplay, I’d like to take a moment to compliment the art team on the wonderful illustrations in this game. In any game where there are futuristic flying machines and airships involved there is always a temptation to go very heavy on the steampunk; unnecessary gears and dynamos as far as the eye can see. Thankfully the steampunk elements here are very subtle and used judiciously. The overall aesthetic is an excellent blend of oriental meets futuristic steampunk meets sleek technology. And it all comes together beautifully. Skyward is a good looking game.

My only real issue with the game (aside from the aforementioned lack of component storage) is the game’s backstory. The different factions formed a committee and you’re on it. Each season, the committee self-selects a Warden to assist in dividing the labor. You’re trying to do the best job so that you’ll be selected as the Founder of Skyward. If that story sounds a little tacked on to you, you’re not the only one. I’m not a big fan of the narrative. It just feels a bit forced to me.

That being said, I really enjoy playing Skyward. While there’s not much to it components-wise, this game’s definitely got some meat on its bones. Trying to figure out which cards work best with one another and figuring out how to get those cards into your airspace is always a challenge. Should you discard some cards that are only of tangential use to you in order to gain a cog or two for future turns or should you hang onto them and hope that you’re able to play them later? Should you take the stack of cards with the Warden token in order to gain a free cog even though it might not be very good? Which card should you play first? If you play THIS card, will it benefit your opponents in some way? Is it worth the risk? The game is full of these micro-decisions.

My favorite part of the game though is taking on the role of the Warden in order to set up the split. This is where things get really interesting. It’s really easy to look through the available cards to find a few that work really well together, but how do you go about making everything else look tantalizing enough to the other players to ensure that you wind up with the cards that you really want? How do you make sure that if someone selects the pile that you really wanted that you don’t wind up with a bunch of garbage that doesn’t do you any good? Do you place all of the faction cards into one pile and divvy the buildings up between the others or do you try to spread things evenly so that no single person gains a clear advantage from their selection?

Or maybe there’s just one single card that you want. Do you put that one all by itself in the hopes that everyone else will select from the larger piles? Or maybe you just want the other players to think that you want that card in the hopes that they’ll take a sub par pile of cards thinking that they’re hurting you somehow. The chances for sneaky deceitfulness abound and this really speaks to me.

Skyward is a very clever and engaging game that’s easy to learn and teach. While the rules are simple, the game play is challenging with just the right amount of complexity. These points, and its short play time, ensure that it will hit the table over and over again. I heartily recommend it. My gaming group has really enjoyed it and yours will, too.