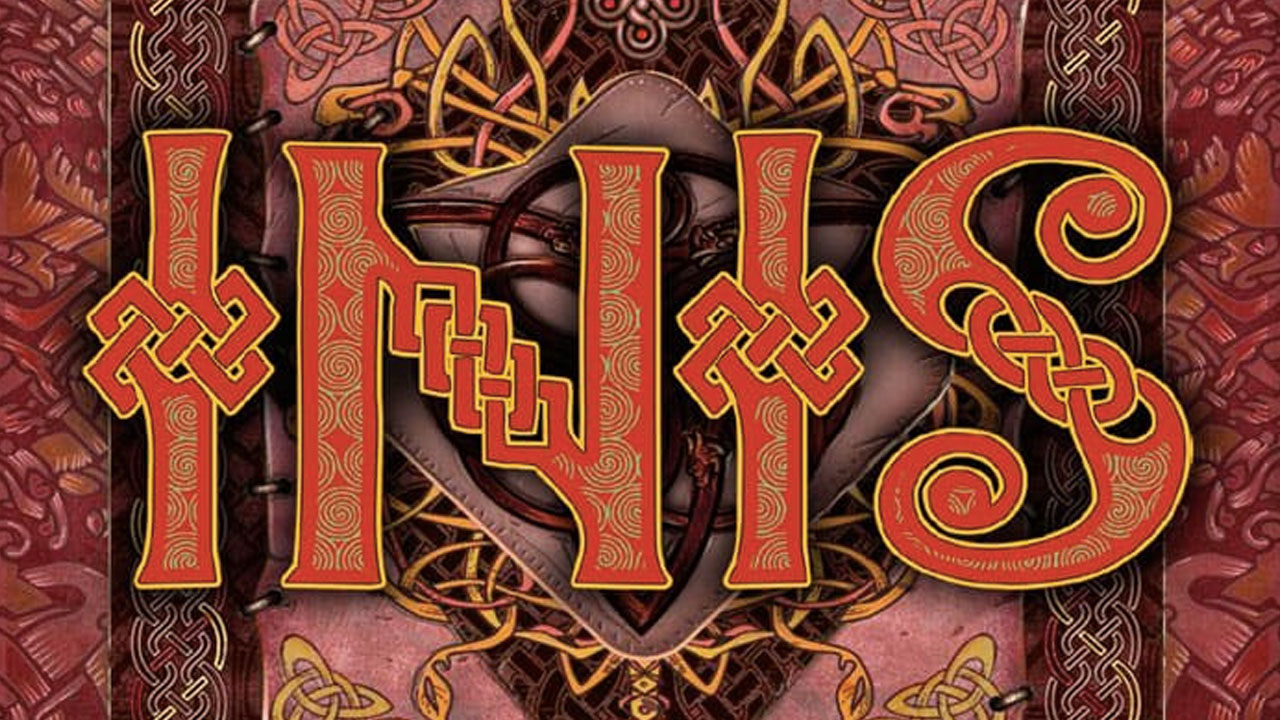 Moving pieces around the board to control areas isn’t exactly a new concept, especially if you are part of a company called Matagot. Matagot isn’t a stranger to the “Troops on a map” genre with their previous titles being Cyclades and Kemet. Their previous games had their own unique gimmicks such as Cyclades’ auctioning and Kemet’s Draw Two Pick One combat. Inis’ shining star in this painted cardboard landscape is the use of drafting cards and a highly deterministic combat system. This game was released in 2016, so does it hold up against the wave of Kickstarter games and massive production of 2020? Let’s find out together in this brightly colored Celtic journey.

There’s an empty chair in the Capital and someone needs to sit on it to get things done around here. You decided to volunteer but sadly, so did a few others. It’s your job to prove that you have what it takes to rule this land and you will do this by spreading your clans throughout six different regions, be in the presence of six holy sanctuaries, or overseeing six of your rival clans as their chief. You don’t have to do all these things at once, but they are ways to win the game and once you fulfill one of these conditions, you must claim “pretender” and hope that you still hold the winning condition at the start of the next round to claim victory.

At the beginning of each round, there are several procedures that take place. Whoever has the majority of Clan figures at the Capital becomes the Brenn. This role not only determines the first player but it also functions as the tiebreaker if there are several pretenders. After the Brenn step, we look at each region and see who has the absolute majority of Clan figures in them. These players are rewarded with the yellow Advantage cards corresponding to that region which they can use for this round. The “flock of crows” token is flipped like a coin to determine turn order, then we get the drafting.

Drafting is the fuel that sparks Inis’ engine. These green Action cards are the only actions that you can perform for the round by playing them on your turn. Want to build a sanctuary? Draft it. Want to move your clans around the map? Draft it. Want to discover new lands? You get the idea.

The system used for drafting isn’t new. Much like every other drafting game like Sushi Go or Blood Rage, you pick one card and pass the rest to your opponent. There is one good twist where you can swap cards from ones you picked previously so if you spot a better opportunity, you can easily do that. It gives the right amount of flexibility and less reliant on luck. This also means that every single turn is going to be different due to the very nature of drafting and shuffled cards. It’s a nice touch.

After the drafting is done, each player will do one of the three things: Play a card, pass, or claim pretender. I’ve already explained pretender and playing cards, but passing is also important. When you pass, you are essentially stating that you won’t play a card. If all other players pass in sequence, the round ends. If one of these players breaks that sequence by not passing and it becomes your turn again, you can play a card. Passing isn’t designed to end the round; the focus behind this mechanism is to use your cards at opportune moments. At higher levels of play, a well-timed pass can send a shockwave into the board state that simply wouldn’t happen if you just played cards one by one with careless intention.

This system of using cards and drafting to maneuver your way through this cardboard island is an interesting dilemma. Not exactly thematic but provides several layers of ways to manipulate your opponents. Besides the usual hate drafting as one would expect in these types of games, you can also feed cards to your opponents to encourage them to act in a certain way. To give one simple scenario, if Karen has a huge army in one region and her neighbors happen to be your other opponents, you can feed Karen several movement cards so she could start causing fights thus disrupting the board state.

Speaking of fights, Inis has a very peculiar combat system. When you move your clans to a region with enemy clans, you start a clash and you are the instigator. If all players agree not to start a clash, then it ends immediately with not a single body to count. If a single player wants to start a fight, a clash will ensue. Players might be able to send their clans to Citadels for shelter while the other clans battle it out. Once the Citadels have been filled, the fight begins starting with the instigator. You have three options: Attack, Withdraw, and Epic Maneuver.

Attacks are as straightforward as they come. You pick a player to attack and they have to choose to lose a clan figure or a green Action card. There are no dice rolls or any other random elements. Losing a card means losing turns to keep your clan figure around, so this choice becomes crucial. The flipside to this is you don’t know the value of the green cards of your opponents. Those cards they are ditching? They might have hate drafted their neighboring player so there is no strategic value in holding them. It is a system that is deterministic with no random elements yet introduces variance in combat that is completely player-driven. It is simple and brilliant.

Withdrawals mean running away to an adjacent province where you have control and playing Epic Maneuver cards allows you to play a card that has a rule-breaking effect via red Epic Tale cards. These Epic Tale cards can only be acquired by doing certain actions and tend to be powerful yet very specific. Not all of them are cards you use in combat and can be used in place of your green Action cards. If drafting is fuel to the engine of Inis, the Epic Tale cards are the tires to make sure the game sticks to the road.

The Epic Tale Cards Are Fine

These cards tend to be a source of controversy among critics and here are my two cents: I love them. The use of green cards and drafting is great on its own. However, there will be a board state where a player cannot do a certain action or they will win. A player who only needs to move to one more region to claim Pretender will be a target of hate draft. It’s not clever or strategic to do this since it is an obviously easy answer. Epic Tale cards break this cycle by allowing players the potential to do the moves they want to do without relying on the drafting and keeping these cards from round to round until they are used at a cost of blind draws.

To add more spice to this area control formula, the landscape itself is different every game. Different regions mean different powers for players to control. The green Action cards have various mechanisms outside of movement and recruiting new clans. You can hold a festival in your region that makes any instigators immediately lose a figure or start erecting new Citadels to shelter you when a potential invasion is stirring. There is the Geis that can completely negate your green Action card or a Druid who scavenges through the discard pile. All these options are useful and much like everything else in this game, timing is crucial.

The goals themselves introduce various ways to tackle this puzzle. You can build several sanctuaries and only need to reside in a few regions, but their downside is they tend to make good targets for a raid. Spreading out to the six regions only requires movement at the cost of thin numbers making your clans easy meals for war-hungry players. Overseeing your rival clans as their chief requires you to hoard movement cards so they don’t simply run away, a task that is just as difficult as herding hungry cats.

All these mechanisms boil into an area control game dripping with diplomacy and grudges. Despite dressing in war game robes, fighting isn’t the focus; it’s simply another tool for you to use. You’ll find Inis is more about chipping away your opponents in a passive-aggressive manner and timing your cards. Much like a good King or Queen, you are rewarded for manipulating others and prioritizing the important tasks while your friends squabble in pointless affairs. Winning in Inis makes you feel like the sneakiest and cleverest person on the table.

Maybe Too Much Kingmaking

The only genuine criticism I have is the kingmaking. I’m aware of the irony of stating that term considering the game’s theme, but this is one of the most fragile games I have ever come across. A disgruntled player can easily throw the entire game out the window and waste everyone’s time with barely any effort. One easy method is by simply drafting good cards to the player who wants to win, which is a flaw I find in many other drafting area control games like Blood Rage. Another is maneuvering their clans around to ensure another player is the Brenn or gets another victory condition.

Obviously, this doesn’t happen every single time but the concerns are legitimate especially when you consider how easy it is to pull it off. I do expect designers to have rules or a system in place to lessen the impact of inexperienced players and Inis fails at doing this.

Outside of that single criticism, I am very surprised how well Inis has stood the test of time. Four years doesn’t sound long but in the board game industry, it could be considered a relic. It is still in print which is a shock in this Kickstarter age where everyone and their kitchen sink want to create a board game. After playing Inis a dozen times, I can see why. It’s a very easy game to get into that doesn’t overload you with numerous components. The rules are simple for the type of game it’s trying to be while providing plenty of player agency and decision making. Any fans of area control games should definitely check this one out.

Buy the Vote Review – Your Next Filler