Welcome to Astoria, where the air is fresh and clean, the residents are genteel and civilized, and the town is experiencing a boom period like never before. New buildings break ground daily, and the railroad connects you to an ever expanding network of nearby towns. You and your fellow tycoons members of the business community are out to make a difference in Astoria, and rake in some cash while you’re at it.

In Raccoon Tycoon players act as business moguls attempting to become the wealthiest player by producing and selling goods, building railroads, and constructing buildings and towns. Clever interaction with the commodities market can earn you cash to expand your empire, while railroads, buildings, and towns will earn you points, which translate to victory! Is this the golden age of capitalism or what?!

If you’d like a quick overview of the game, continue reading. If you’d rather just find out what I thought of Raccoon Tycoon, skip to the end. 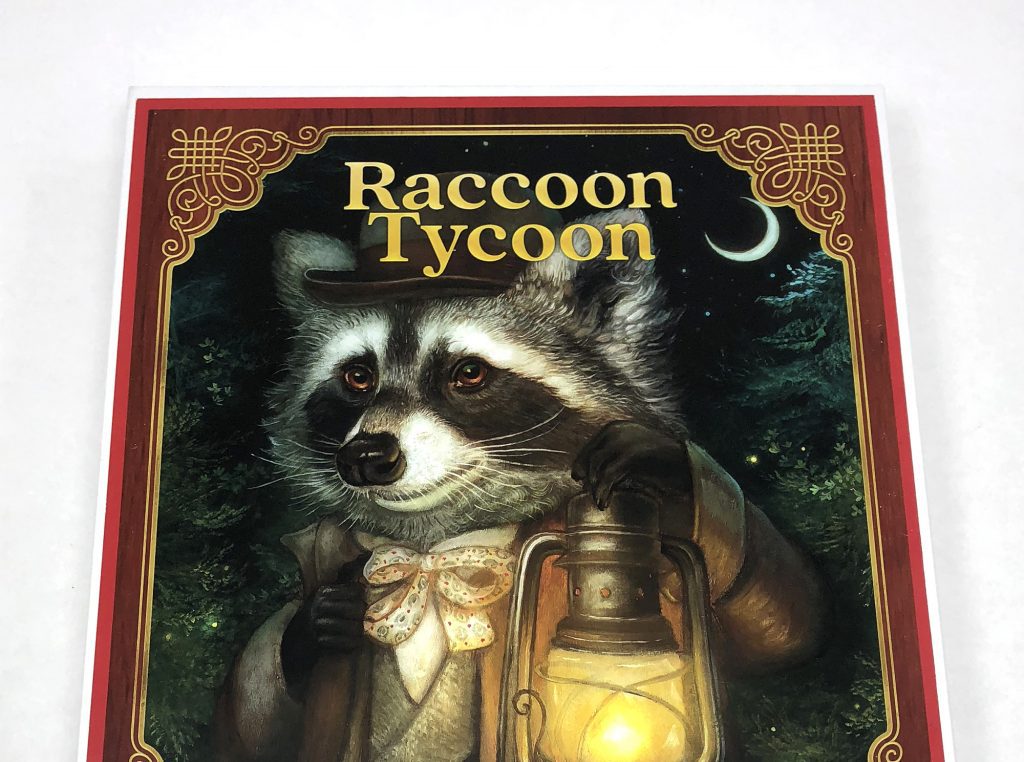 At its heart Raccoon Tycoon is a card game, which makes setup fairly simple.

Shuffle the Price & Production cards and deal three to each player. These cards will allow players to produce goods which they can sell on future turns.

Group the Town cards by the value located in the center of the card, then stack them in ascending order, with the 2 group on top, then the 3 group, etc. Then turn one Town card face up on the board.

Shuffle the Railroad cards and turn two face up on the board.

Select a start player and have that player select a single commodity token of their choice (wheat, wood, coal, iron, “goods”, and “luxury items”). Each subsequent player is allowed to draw one additional token, (3rd player gets 3, etc.). Each starting commodity must be unique (no player can have more than 1 of a single commodity type at the beginning of the game). 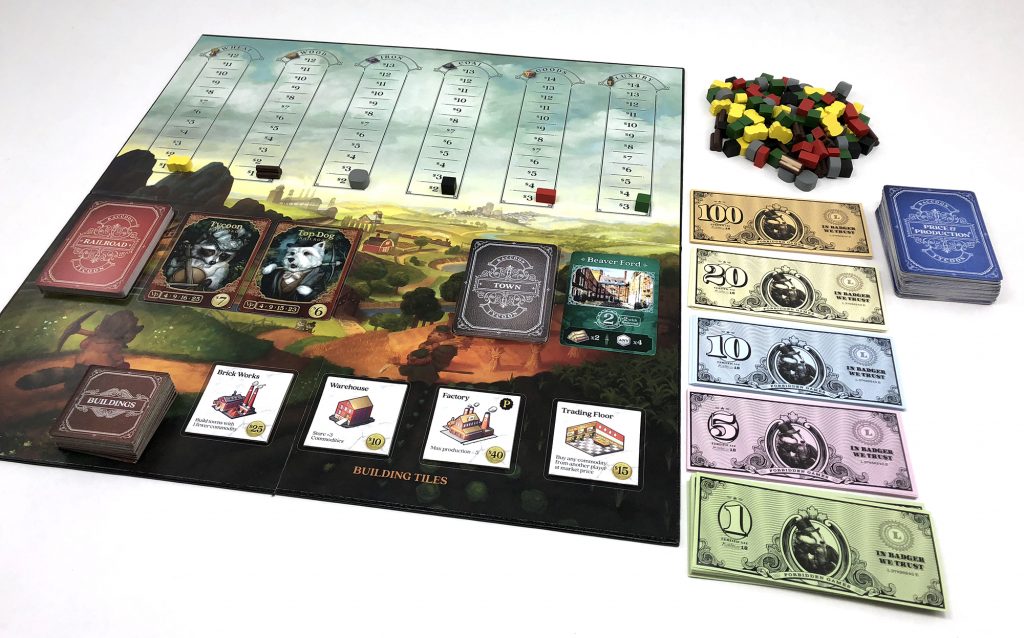 One of the appealing things about Raccoon Tycoon is the simplicity. Each player is able to select a single action from 5 choices. Individually these choices don’t move the needle much, but over the course of the game your choices add up to victory…if you choose the right ones that is. 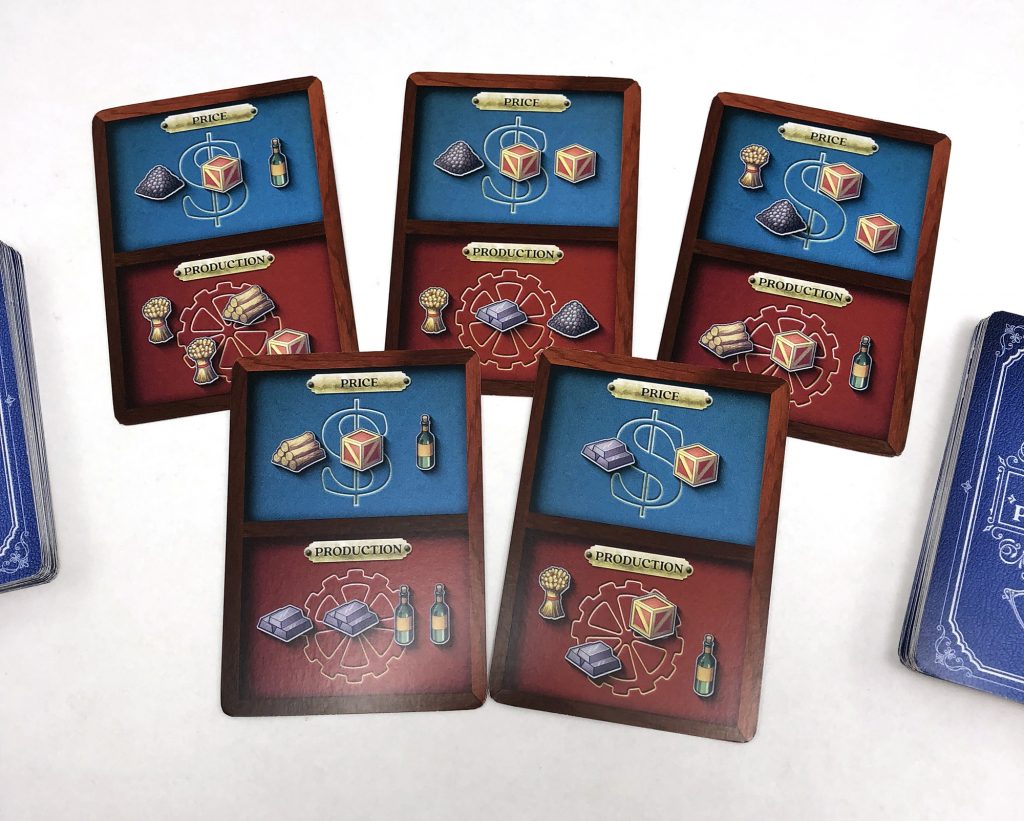 Players can sell as many of one type of commodity for the current market value (sell 4 wheat for $6 apiece). Players then reduce the value of wheat by the number of pieces sold. Because the value decreases when items are sold, make sure to monitor your opponents resource pool to sell high before they can. 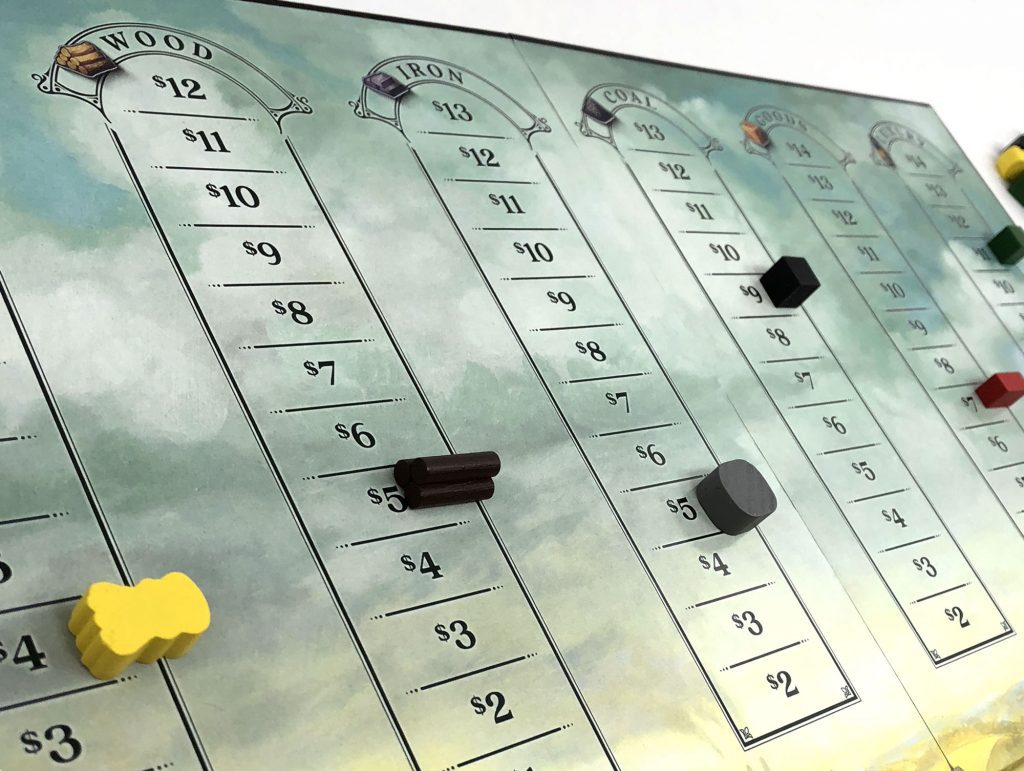 Players select one of the two face up Railroad cards and announce an auction. Starting with the number at the bottom right corner of the card, the auction proceeds around the table, with each player passing until only one player remains. If the auctioneer player doesn’t win the auction then they may select any other action (including another auction). Railroad cards are worth points at game’s end depending on how many of each type you have (a single Tycoon Railroad card is worth 4 points, while a set of 3 is worth 16 points). Because Railroad cards are worth far more in sets, make sure to pay attention to the cards your opponents have to avoid them getting the valuable set bonuses. 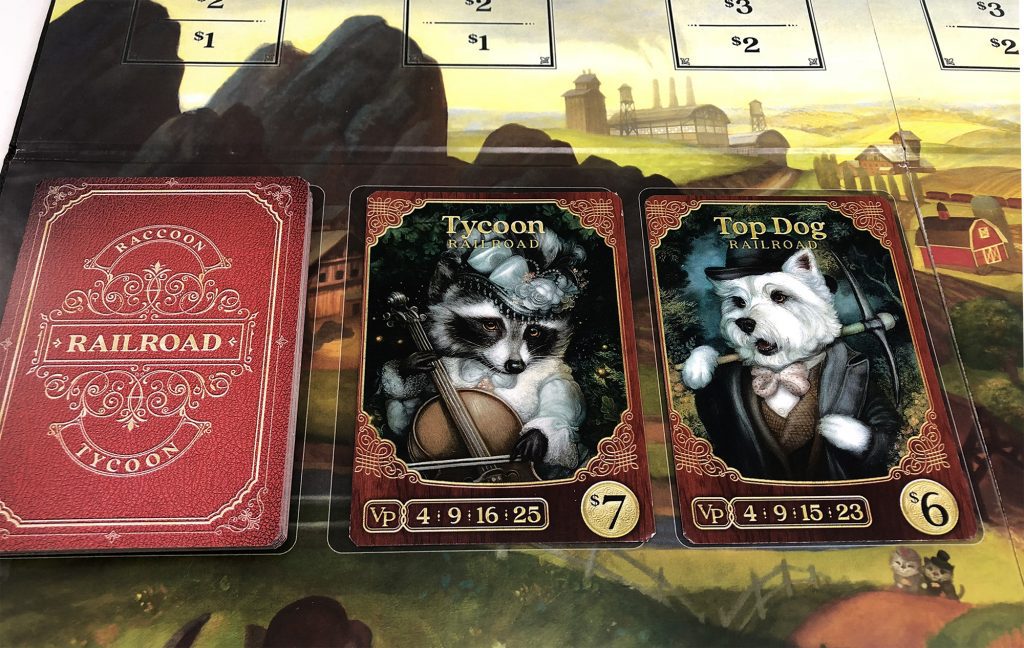 Building tiles are only worth a single point at game’s end, but they offer helpful special abilities which can set you on the path to victory. Try to pick up as many of these as you can along the way. 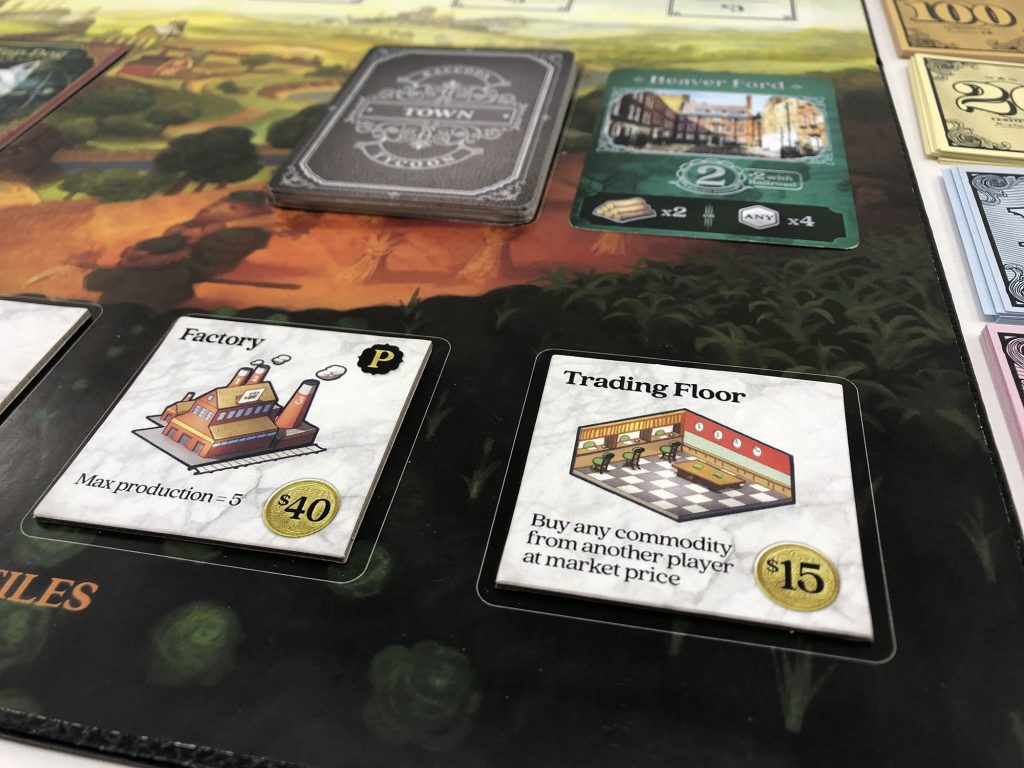 Players may purchase a town card for the amount shown at the bottom of the card. The cost will be either multiple of a single resource (3 wheat for example), or a given number of any resource (6 of any). Town cards provide points equal to the number found in the center of the card. Town cards also combine with Railroad cards to provide extra end-game scoring. Do your best to maintain a one-to-one ratio of Town cards to Railroad cards so that you’re maximizing your combo scoring. 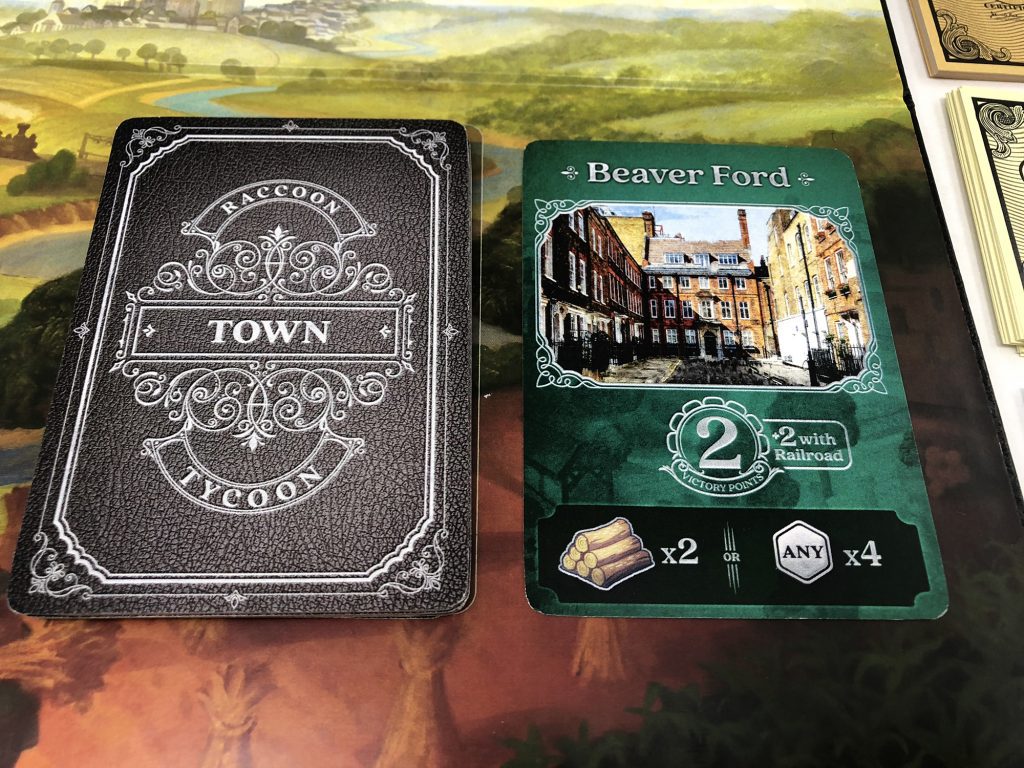 Play proceeds around the table until either the Town card stack or the Railroad stack is empty. Finish the current round so that each player has the same number of turns, then proceed to the scoring phase.

Players receive points from Railroad sets, Town cards, Building tiles, and the Railroad and Town card combo. The player with the most points at the end of the game is the winner.

The first thing you’ll notice about Raccoon Tycoon are the illustrations by artist Annie Stegg. More fine art than most board games, they’re gorgeous and rich, popping off the page with character, charm, and detail. But these animals aren’t just cute and cuddly; they’re savvy, shrewd, and will take control of the commodities market like a bull dominates a pasture. 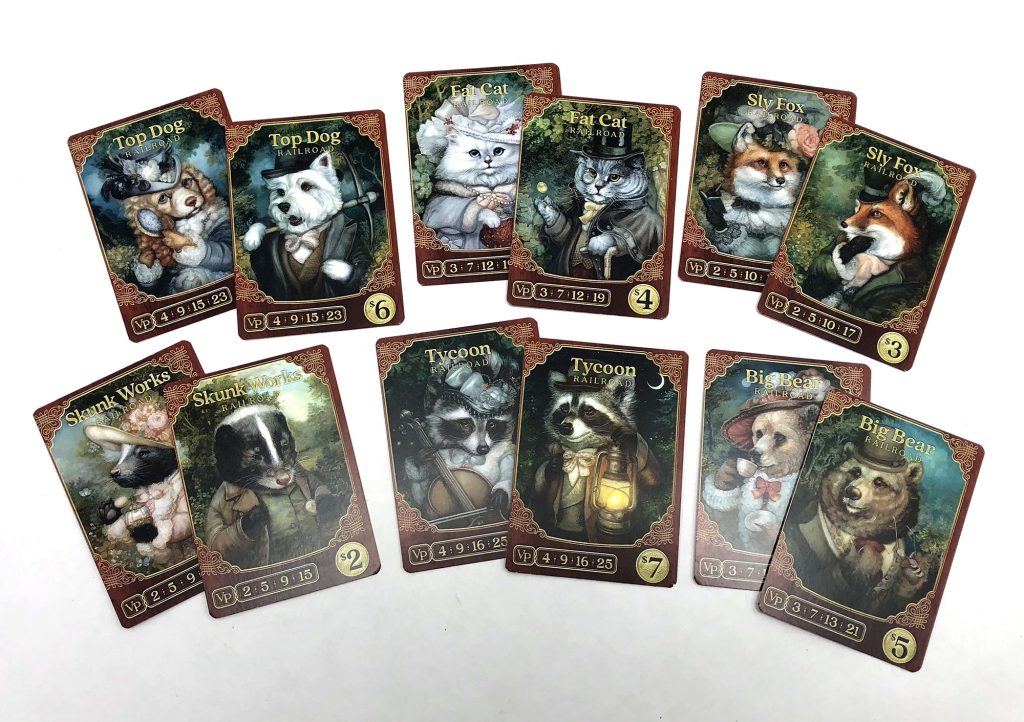 Raccoon Tycoon is a fairly simple game to play, offering only 5 choices to players. While there’s not an expansive set of strategies, there’s still an approach for every player. Do you purchase buildings early on to get useful special abilities and end game points at the expense of cash flow, or do you hold tight and save your money for a railroad auction where the real victory points lay? Do you wait to sell commodities when the market is at the peak, but risk losing it all when your opponents sell early and reap the rewards?

Being able to read your opponents and second guess their plans is really worthwhile in this game. Per the current draft of rules, there’s no indication that money or resources should be private, which means the table is open for people who can plan ahead. 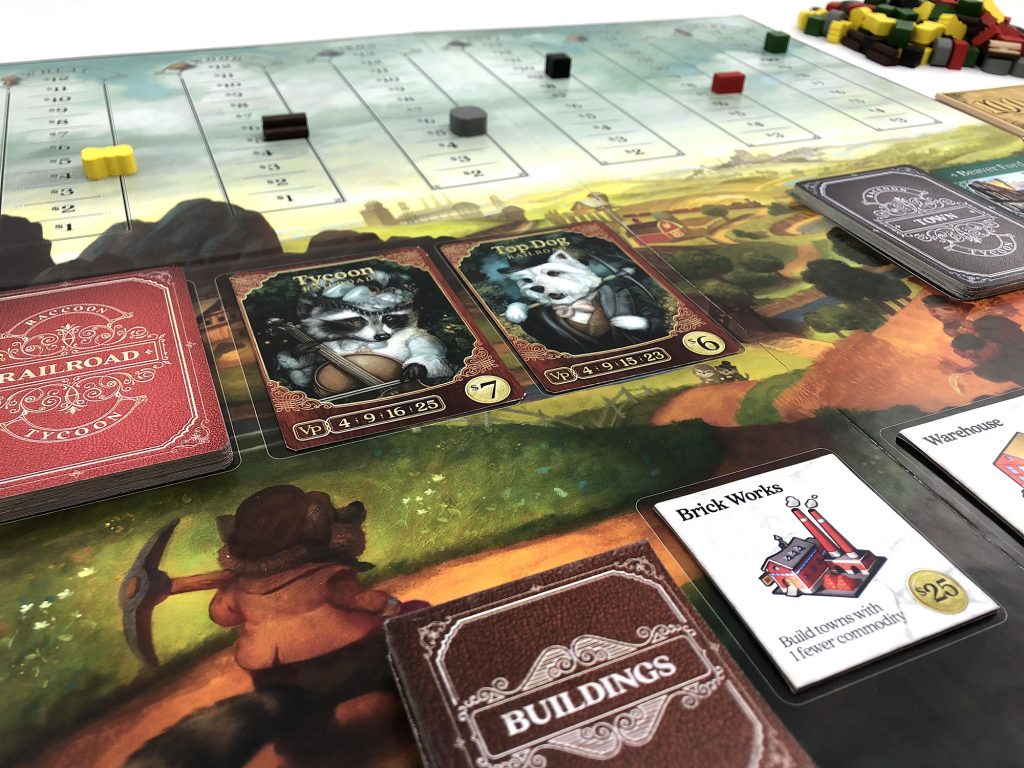 There’s a few things we noticed in our plays of Raccoon Tycoon that could impact play. We’ve sent on these concerns to the publisher who seems very responsive, but it’s uncertain whether they’ll wind up changed in the final game.

Let’s start off with my biggest concern: end of game scoring. The only things which provide points in the game are Railroad cards, Town cards, and building tiles. Neither money or resources are worth anything at the end of the game. In a 5 player game with our writing team this led to a single round which lasted about 20 minutes while players tried to shed money and resources auctioning off Railroad cards, purchasing buildings, and buying up Town cards.

It would be ideal if there were some mechanism which allowed players to exchange money and resources for points at the end of the game. The Bank building tile allows the owner to exchange $20 for a point at game’s end, but it might be worthwhile to allow all players that ability, with the Bank giving the owner of that tile a supercharged version. At game end the Town cards can be a way to offload resources, but only if you have the correct type and count of the resource for the card on the top of the stack.

The commodity market is one of the most interesting aspects of the game. Producing and selling resources cause the market to fluctuate in interesting and occasionally frustrating ways. It’s the only source of income and can really allow clever players to reap huge benefits. We found that the markers for the market got in the way of the value. That should be an easy graphic design or component change, but it’s something to be aware of.

The Railroad cards are the biggest single source of points, and this action should certainly be selected whenever possible. The downside of the auctions, especially in a high player count game, is that the person starting the auction is at a severe disadvantage. In a 5 player game for a Railroad starting at $5, the bid was at $10 by the time the card got back to the auctioneer. Paying attention to how much money other players have is really important and will make your auctions much more effective.

Raccoon Tycoon will ship the game with paper money, which could be a polarizing decision. That said, they’ve indicated their plans to make the production version of currency as high quality as possible, and even have plans to allow for metal coins as a Kickstarter add-on.

One other small downside is that while the animal artwork is gorgeous, I wish it were used more. As a player I’m not a raccoon, or a skunk, or a bear. I’m simply buying into their railroads. So who am I if not a fox? I’d love to be able to play as one of these animals, but that’s not an option. 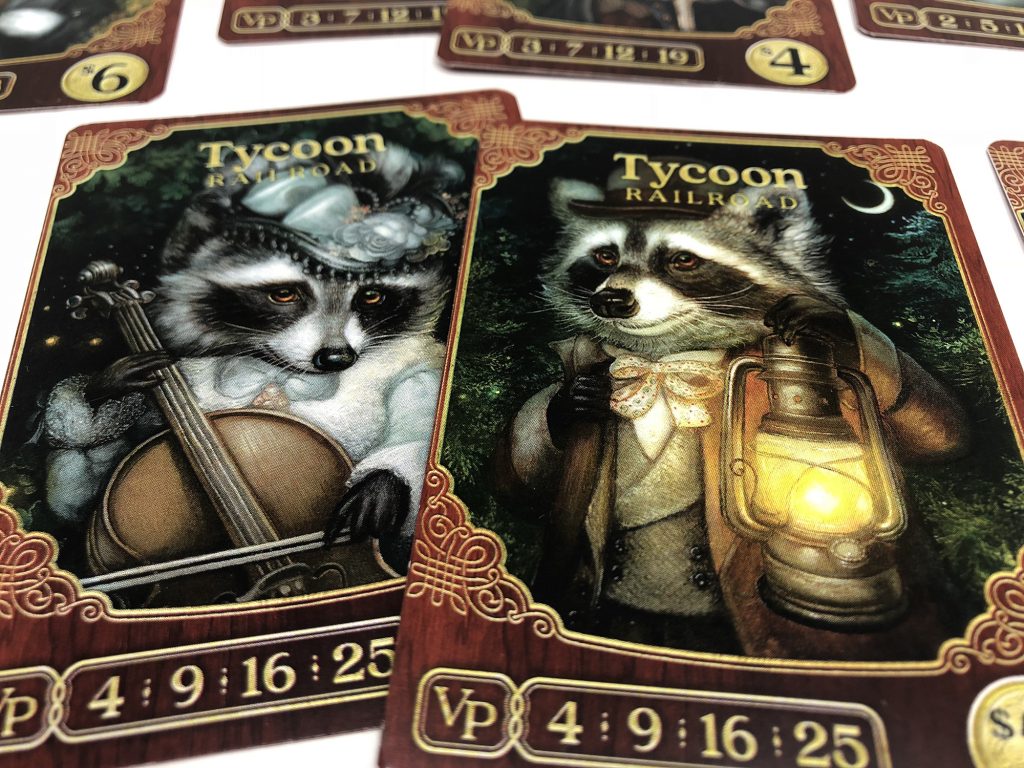 In the reviewer letter we received from Forbidden Games, the publisher of Raccoon Tycoon, their stated goal was to “offer a game that would appeal to fans of games like Settlers of Catan”. Were they able to accomplish that goal? In my opinion, absolutely. The game is streamlined and plays quite smoothly. Individual actions are easy to understand and will add up to a strategy that can be distinct for each player. Raccoon Tycoon is simple to learn and teach, fun to play with fantastic art; a solid gateway game for friends and family.

Check out the Kickstarter campaign and decide if Raccoon Tycoon is right for you!