Pyramid of Pengqueen Review: A Family Game of Suspense and Secrets

There’s a tale of the lost Pyramid of Pengqueen that is full of treasures. This has piqued the interest of some talented penguin adventurers. After months of searching they finally found the secret entrance hidden in the kitchen of their old school! After following the path down into a massive underground cave they found standing in the middle of the Pyramid of Pengqueen.

The penguins gathered their courage and entered the pyramid but were trapped when the gate slammed shut behind them. They looked around in fear and heard a frightening sound, something was shuffling and moaning off in the distant shadows, then they heard a voice whisper to them…

“Foolish penguins, I may be old, but I still have the power to drag you down into my tomb for all eternity.”

They awakened the Pengqueen and now their only chance of escape is to move fast and collect a specific set of magical treasures which will break the mummy’s curse and allow the adventurers to escape with their lives…and the treasure!

How does it play?

This is a hidden movement press your luck game. It’s set up so that one player is the Pengqueen, the mummy penguin queen, and the other players are the treasure hunting penguins. There are two sides, mirrored, on the board which is metal and the pieces are magnetic. 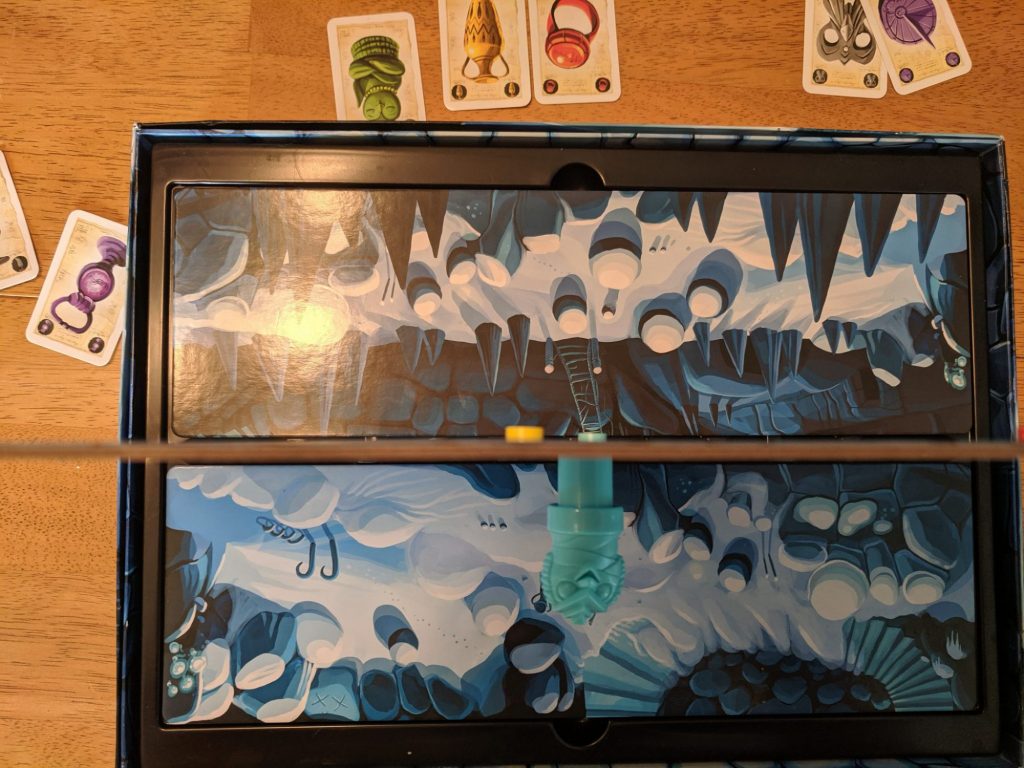 In Pyramid of Pengqueen, players acting as treasure hunters roll dice to determine how their penguin will move. The treasure hunters are trying to land on the board spaces which match their secret artifact cards. The Pengqueen player is hunting them from the other side of the board, trying to capture their pawns to collect their life points.

At the start of their turn a treasure hunter can ‘reset’ their white dice. This means that they collect any lost dice that previously rolled mummy faces. If they do this the mummy gets to immediately move the number of spaces equal to the white dice collected. Next they roll their white dice and any dice that show with a mummy face they set aside and keep mummy face up. The main player then chooses which remaining die face they want to use and announces it to the Pengqueen. If they pick a number, the player must move that many spaces in any direction. If they pick an arrow they must move in a straight line until they hit an obstacle; another penguin, a wall, or the mummy. If they end their move on one of the artifacts they were randomly dealt at the beginning of the game they reveal that card to the Pengqueen and set it to the side. If a treasure hunter plays their last treasure card they win!

Pyramid of Pengqueen is an easy game to learn and could be fun for even a group of adults. It’s a very light game though. Some simple bluffing and the press your luck mechanic of resetting the treasure adventurer’s dice make it enjoyable enough for a quick laugh or pregame while waiting for others to arrive for a game night. My kids picked it up pretty fast but they were tempted to cheat because daddy can’t see their side of the board. This led to a couple more serious conversations about why we play games, how cheating makes other players feel, and what causes us to cheat. They’ve grown as players and are better in their attitude when they lose but are still so excited when they win!

Considering which treasure to pursue.

Olivia cleverly sneaking around the pyramid.

She captures a treasure!

Pyramid of the Pengqueen is a game full of suspense. The hidden movement aspect make it very exciting for kids to play. They have an idea of where the Pengqueen token is, especially when you talk it up, but they are never truly sure how close you are. The reset mechanic is another way the suspense ramps up. Sometimes the players are lucky and don’t roll any mummy faces for awhile. This is frustrating for the mummy because they mummy dice doesn’t have many faces to allow you to move. But when the players roll poorly the mummy can soon be zipping around the board no problem. It’s a delicate balancing act for the players; do we let the mummy move in short bursts but often or wait for longer less often movements?

My girls, Olivia (5) and Clara (7), where biting their nails in fear of seeing their treasure hunter tokens “snap” to the mummy token magnet. It’s such a satisfying sound and reaction when you’re the Pengqueen and you hear the magnets click and see the surprise in the eyes of your children. It didn’t happen too often for me in this game; they’ve gotten sneakier and like to whisper now. But I’ve had my fair share of wins as the Pengqueen.

Is It Worth It?

The theme is fun; Ice Cool Games rethemed an older game, Pyramid by Ravensburger. The art and style of the game is fun and bright, lending itself to feel like a game just for kids, but the mechanics are solid enough for adults to enjoy.

It’s best played at three or four treasure hunter players, bringing this game up to a potential 5 player game. It helps increase the suspense and increases the resources the players have to survive the mummy. It’s harder at smaller numbers because the game can go short if the mummy is clever or go long if they players don’t focus down their treasures. 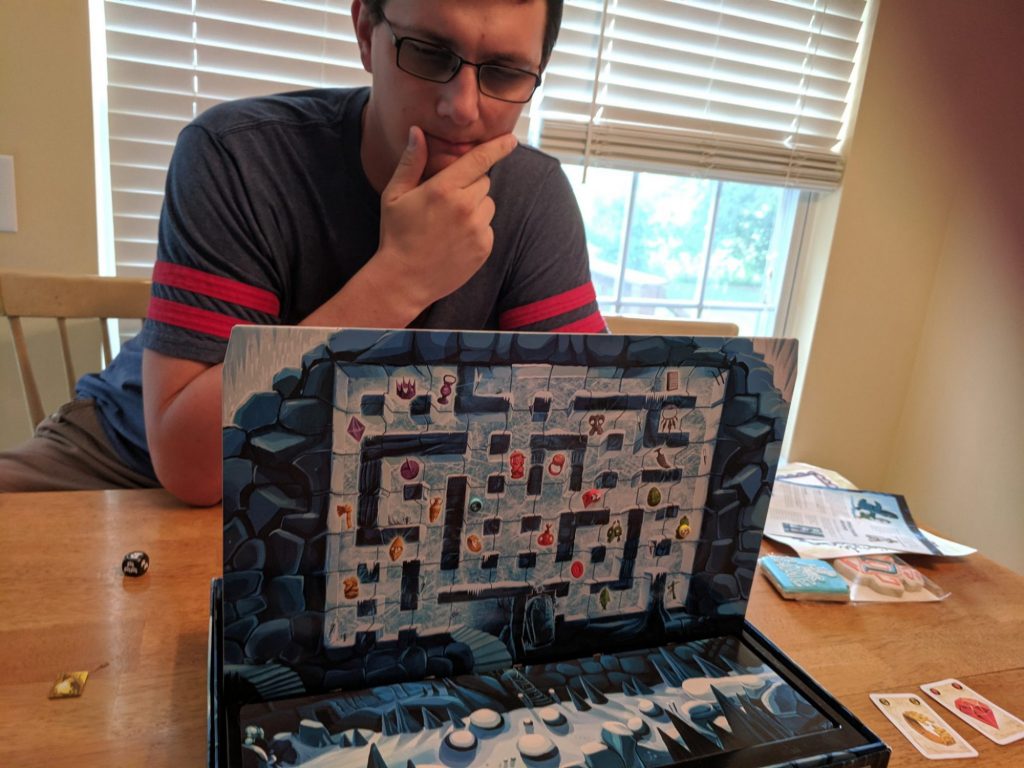 Which way did they go?

The game materials are quality. The board is solid and has handled gentle abuse from my two girls. The magnets are strong and stick to the board and will snap to each other through the board consistently. Keep in mind only the pathways on the board are magnetic not the whole board. The player pieces are pretty small, however. It’s not so bad for my girls and their smaller hands but when I play the treasure hunters it’s easy for me to fumble around with them. The mummy player token is a big solid mummy so that’s very easy to handle. The life tokens are also small and just little rectangles of cardboard. Sturdy enough but easily slip to the floor or between the couch cushions. The treasure cards are thin and small but have held up our multiple playthroughs. These are probably one of the few things that feel of decent size for everyone.

The pyramid board sets up easy and stands strong in the insert inside the box. It’s a nice touch to just have the board slide right into the holders. They have covers for each side of the box, supposedly to catch magnets that fall? That doesn’t work all the time. We found ourselves removing the covers to grab a card or magnet that slipped through. There also isn’t enough space on them to keep your hidden cards, especially with more than 2 treasure hunters.

Most of these are minor gripes and probably wouldn’t be much issue with older kids and adults, except the size of the player magnets. On Amazon it’s $30 and I feel it’s well worth that.