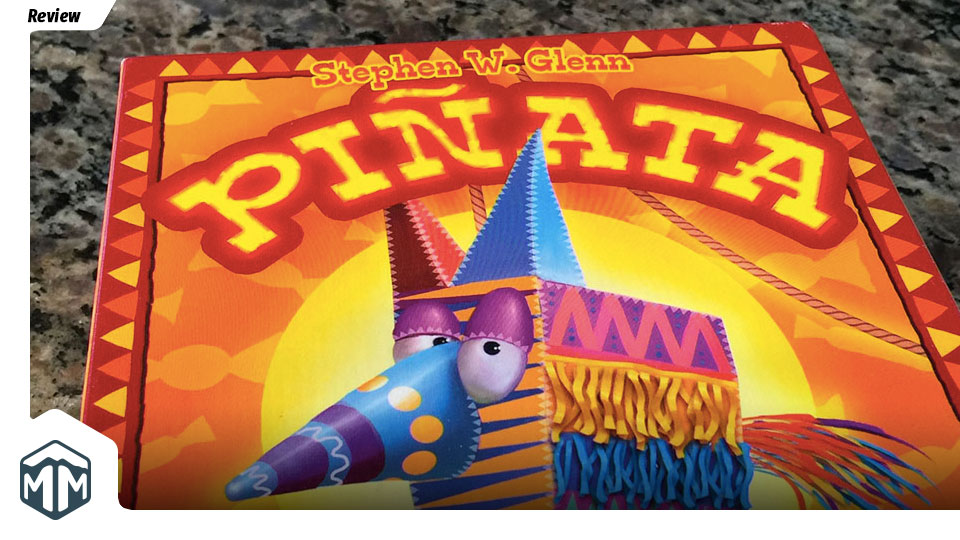 In Piñata players take on the role of kids at a birthday party, both trying their best to break the piñata and get the delicious candy inside. Clever management of your cards will help you be the first to crack open that paper-mache shell. Piñata is a fun fast card game for two players which pits players against each other, both trying to gain the most candies of certain colors to win coveted medals. Be the first to earn 3 medals and be the winner of the birthday party!

Piñata comes with 4 over sized marker boards which indicate how many candies belong on that card, and whether you’re trying to play low or high. 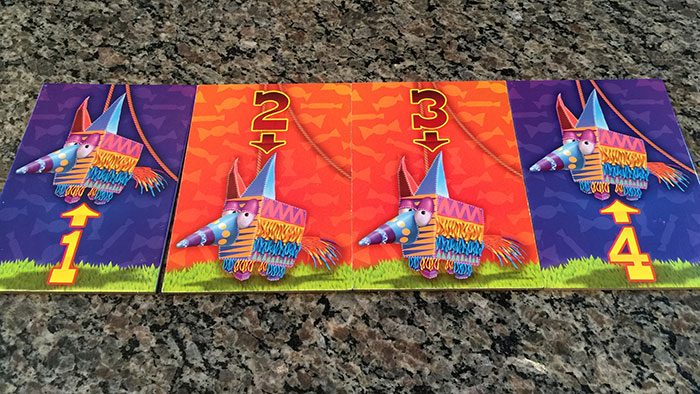 A deck of 54 cards in red, yellow, green, purple, pink, and white (wild cards), each with different numbers on them. 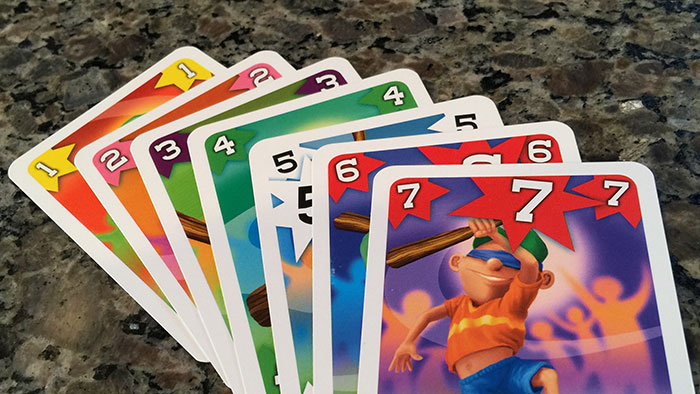 5 medal cards which are used to mark victory. The value on a medal card indicates how many candies of that color are required to claim the medal. 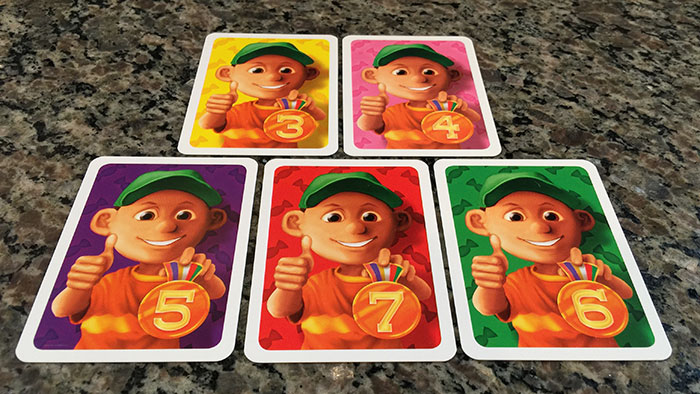 A number of wonderfully shaped wooden candies within an opaque cloth bag. 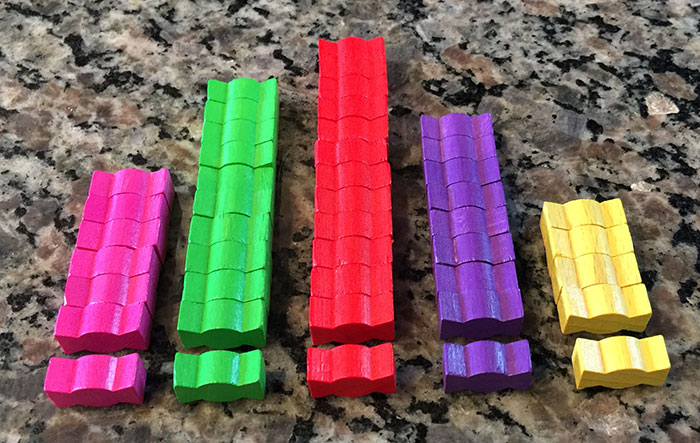 How to Setup Piñata

Setup for Piñata is fast and easy. Shuffle up the large boards (and randomly flip them to a side) and lay them between both players in order from 1 to 4.

Lay out the 5 award cards to the side.

Shuffle the deck and deal 8 cards to each player. Select a first player and begin the game.

How to Play Piñata

The goal of Piñata is for a player to play specific cards to their side of each of the large Piñata boards. A board with an arrow pointing up means that the player is trying to play a combination of cards with the highest point value, while a down arrow means the lowest point value.

The number of candies resting on each board dictates how many cards can be used to achieve the score. Furthermore, the colors on the candies restrict players to playing only cards from those colors, and exactly those colors. 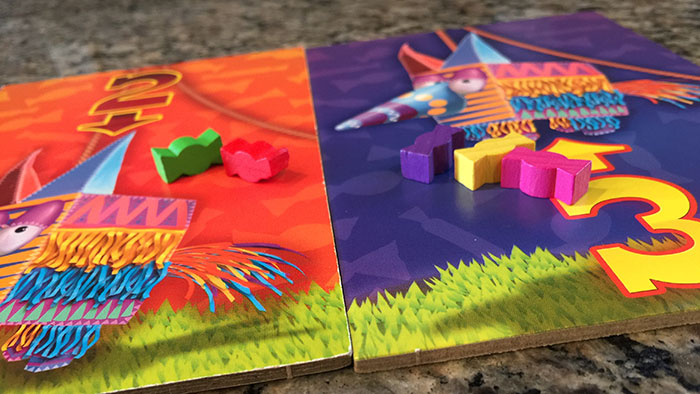 Once a player has placed the correct combination of cards on their side of a board, they have the option of playing cards to their opponents side. In the example below, the player on the left has already placed the correct number, and color of cards (using a white wild as a stand in for the required yellow card). 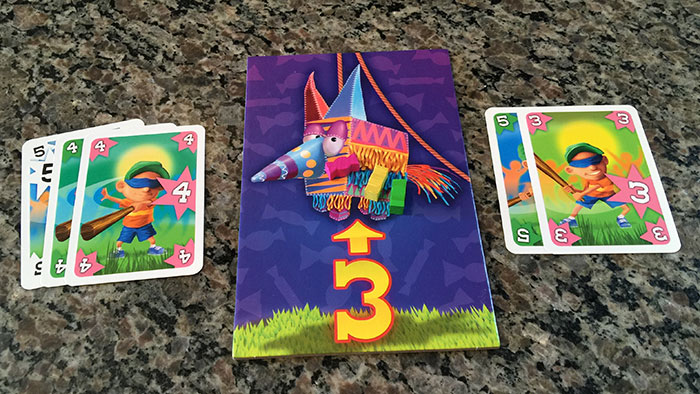 This means that they can now play a yellow card of their choosing to the other player’s tableau. Given that this board scores high, if they played a yellow 1 or 2 they would win the board.

When both players have the correct number and color of cards on a board, the game stops and players determine who wins that board. The winning player takes the candies from that board, flips the board to it’s opposite side, places new candies pulled from the bag upon it, and gameplay resumes.

If after taking candies a player has enough to claim a medal, they take that medal and place it in front of them.

The first player to claim 3 medals is the winner.

As always I start with the art: if the box isn’t visually appealing you’re not likely to pick it up and Piñata doesn’t disappoint in the art department. The box is delightful: festive, and brightly colored, with a mexican party theme to it. The piñata has a 3d feel to it not generally found in board games, and quite refreshing.

The scampering youth featured on every one of the cards appears quite determined to have his way with the piñata and the look of satisfaction on his face in the medal cards is rewarding.

The boards are thick and sturdy as you might expect from something that will be flipped over dozens of times in a single game. The playing cards are high quality and should stand up to many plays.

Lastly the candies…what a fun shape, and how thematic that they’re shaped just like old fashioned wrapped candies! Your and your partner will have a great time pulling these out of the bag, and stacking them in front of you.

What I Dislike About Piñata

The only negative I might say about Piñata is that it can sometimes run a tad long. The box says 30 minutes, but sometimes a game can push 40 minutes because players analyze the card placements. This isn’t a huge deal if both players are aware of it, but just know that can be a problem.

It’s worth noting that Piñata is a sort of rebrand of an older game called Balloon Cup. If you’ve been wanting to try that game, but can’t because it’s hard to find, then Piñata might scratch that itch for you, and at a much cheaper price point.

I play with my 10yo daughter frequently, and have begun teaching my 7yo son the game. If you’re looking for a great, fun, fairly fast two player game then Piñata is definitely right up your alley. Why not take a swing and see if you like Piñata?!