Pandemic is arguably one of the most popular board games of all time. It has had several iterations ranging from Cthulhu, to multiple legacy games, several expansions to the base game, and yearly tournaments. Recently, Pandemic designer Matt Leacock has been developing a new version of Pandemic with a local designer from the host country of the yearly tournament. The 2016 iteration got us Pandemic: Iberia which incorporated a lot of interesting concepts into the base Pandemic formula and I thought did a great job tweaking the system. This year Matt Leacock partnered with the small but critically acclaimed Dutch game publisher Splotter to bring us a version of Pandemic we’ve never experienced: Pandemic: Rising Tide. 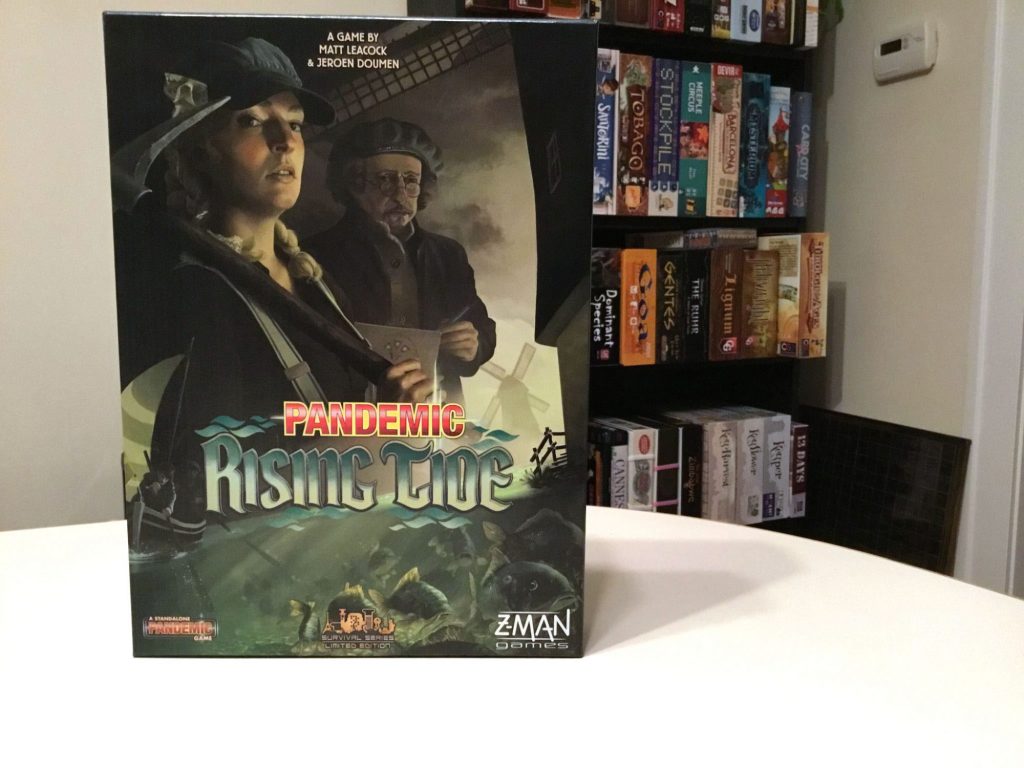 The Splotter team are my favorite designers – Indonesia is brilliantly simple, with a company merger mechanism that can shift the course of a game in a single turn, Food Chain Magnate is a masterpiece of thematic and logistic goodness where you’re the CEO of a fast food chain and you can basically do whatever you want to maximize your profits, I’ve gushed about The Great Zimbabwe previously, Antiquity is a medium complexity, fairly medium weight game with the exception of the game trying to absolutely consume you – making the game much heavier than the basic rules indicate, and Roads & Boats is a mind-bending logistics puzzle with one of the coolest board mechanisms I’ve ever seen.

When I learned that one of the Splotter team members, Jeroen Doumen, was the guest designer on Pandemic: Rising Tide (set in the Netherlands), I was interested in the game. The theming of this new iteration of Pandemic moves away from curing diseases and instead focuses on preventing the tide around the Netherlands from overflowing and consuming the countryside. 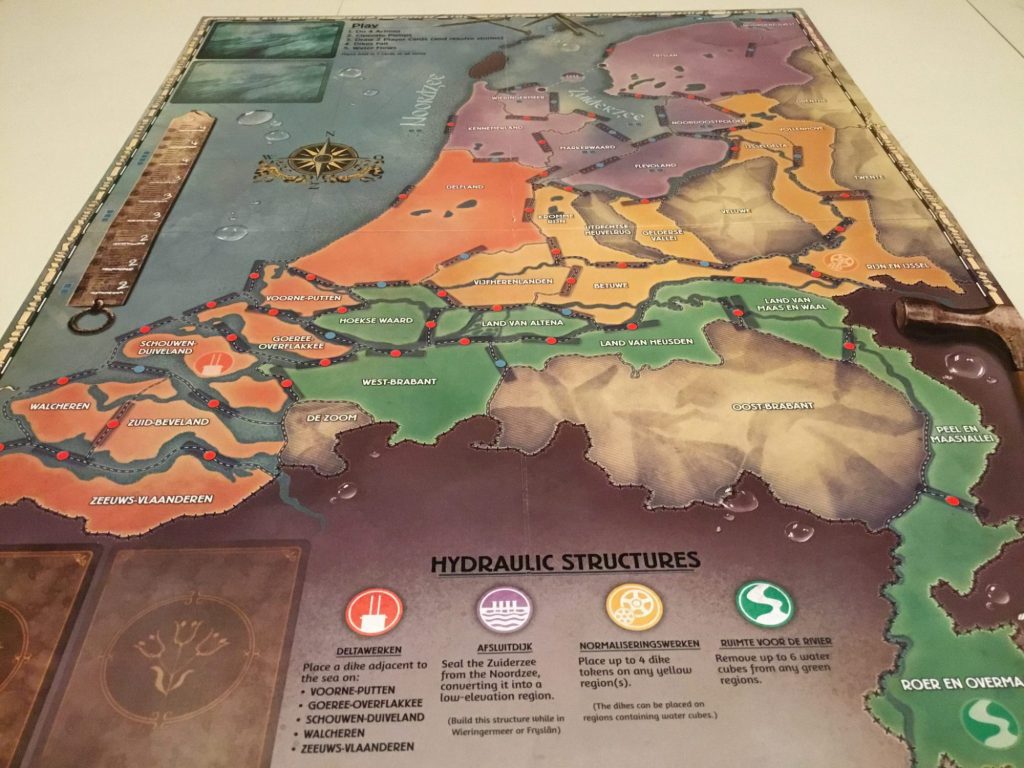 I’m not going to cover all of the mechanisms of the game since the game starts from the Pandemic formula. Instead, I’ll cover what is different and special in this game.

The Tides are Coming

In Rising Tide, you have infrastructure set up around the country to keep water from moving from region to region. The infection draw pile in Pandemic is replaced with a dikes failing deck. Whenever you draw a region from this deck you have to remove one dike from around the region, or if there are no dikes you add a water cube to that region. On your turn you can build up these dikes in your region as long as there are no water cubes where you are. You can also remove one water cube from your region for an action. Interestingly enough, adding the dikes to your region acts similarly to removing cubes in base Pandemic for reasons I’ll get into later.

The sticks represent dikes between regions and the cubes are the water.

These dikes are incredibly important for two reasons. First, they act as your first line of defense against the cards you’re drawing. Second, and most importantly, they prevent the flow of water throughout the board. The water in Rising Tide flows from location to location. This works by starting with regions which have four water cubes and adding cubes, up to three, to the regions adjacent to them, as long as there are no dikes between them. This is continued for three and two cubes.

I mentioned above that there can be regions which have four water cubes, but this isn’t completely true. Any region on the board can have three cubes in it, but if a fourth were added, that region would flood and add cubes to each adjacent region. Fortunately, there is no end game condition based on the number of floods, similar to the outbreak tracker in the original game. 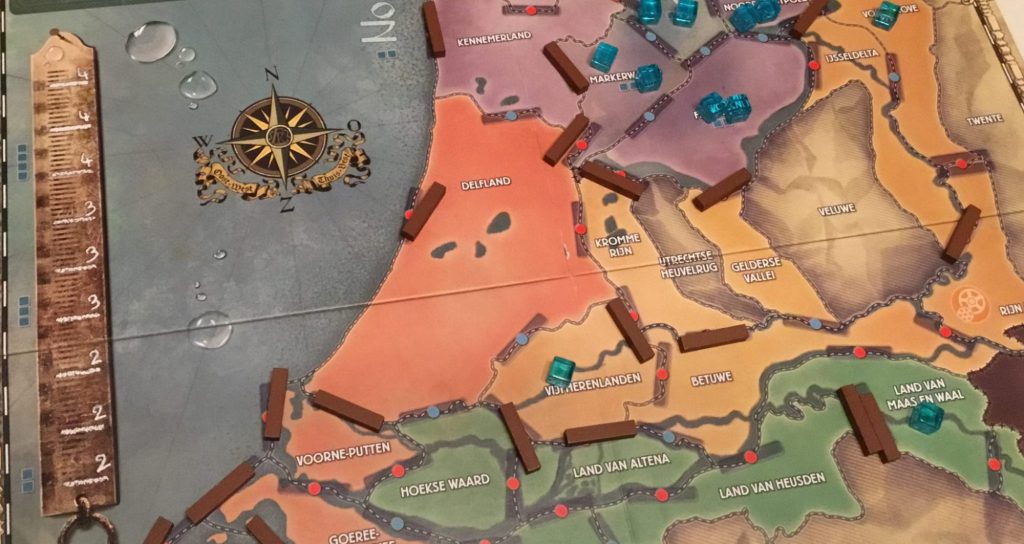 The tracker on the left side of the board maintains the sea level.

There are two regions that can have four cubes though and those are the sea regions around the board. Whenever you draw a storm card (the equivalent to an epidemic) from the draw pile you move the sea level tracker, which may increase the sea level. This is an indicator of the number of cards you draw from the dikes fail deck each turn as well as the number of water cubes in the sea. The sea overflows into any adjacent land region which has no dike to protect it.

One of the new mechanisms in Rising Tide are pumping stations, which act as a second line of defense against the oncoming ocean tides. These stations work by removing one water cube from the board per station as long as the water cube is part of a connected path of water from the station.

The pumping station (the orange structure) can remove any of the visible water cubes.

So How do you Win?

Obviously you can’t cure the flood completely in this game. What the game gives you instead is hydraulic stations. Building each one of the four hydraulic stations gives you either a permanent or one time bonus. Two of the hydraulic stations let you place bonus dikes, the third lets you remove water cubes from a region, and the fourth closes the sea at the top, limiting the flow from off the board.

I’m going to start with some of my gripes about the game. First, the quality of the components is a little lackluster. I’ve played about five times now and my board is significantly warped.

The graphic design of the game makes some of the gameplay challenging. For instance, there are rivers flowing all throughout the game board, which conflicts with the boundaries between the regions.

Board warping after just a few plays.

I’ve noticed that the rules and upkeep are a little fiddly. I occasionally miss a dike around a region and place a water cube instead. At other times I’ve missed some of the water flowing due to the shape of regions and not being able to follow adjacencies very well.

Beyond these relatively minor issues, the game is fantastic. For me, it is the best version of Pandemic I’ve played to date. The logistical puzzle of water flowing and understanding the choke points in the game is incredibly tantalizing. Being able to process and close off the parts of the board as needed is a much deeper puzzle than the base game. This also makes drawing the storm cards a more intense and pressing problem. In regular Pandemic, drawing an epidemic will make a location into a momentary hotspot adding three cubes there, but in Rising Tide a Storm might dramatically shift the landscape of the board by bursting some of your important defenses along the ocean.

I’d argue that Rising Tide is the most thematic version of non-Legacy Pandemic to date. The water flowing mechanism is a perfect thematic representation of how the water would flow as the tides rise. Also, the building of pumping stations is thematic and in how it removes water from the board. Throughout the game, it feels like you’re battling back the water which is lashing towards you. You’ll have turns where you barely clear out a region and put up a dike just in time to prevent the water flowing into the space you just cleared. As you do this, it feels like you’re holding back a wall of water and are the person on the front line of defense. I’ve never personally felt a more evocative theme from a Pandemic game.

If all of this isn’t enough for you, the game comes with a built-in variant. There are a series of objective cards, which ramp up the challenge of the game. These objectives require you to build up the population in different regions. The game also has ways to scale the game to higher difficulty using more objectives. Thus far I’ve only beaten the game at the Heroic Apprentice level (4 objectives and 8 storm cards) and have yet to attempt anything beyond that because I barely beat made it through.

If you’re a fan of Splotter games and want an interesting co-op game with lots of meaty decisions and planning, Pandemic: Rising Tide is a good fit for you. The base Pandemic formula is a well defined and something I really enjoy. Rising Tide twists the Pandemic formula into something more strategic; making each of your decisions more impactful. Even with the aesthetic and component complaints I have, I highly recommend Pandemic: Rising Tide.