No Thank You Evil! Review – a Role Playing Game for Kids

My two daughters, Clara and Olivia, gave me the big, pleading, eyes that only daughters can give and I told them we would play a short game of No Thank You, Evil! This is “the ENnie Award-Winning game of make-believe for creative kids and their families” made by Monte Cook Games. No Thank You, Evil! Is a tabletop game focused on adventure and imagination. In this game each player creates a character based on a selection of descriptions which are designed to get their imagination fired up. The players create simple sentences, the length of which is adjusted to match the age of the player. “I am a [verb] [noun] who [adjective]”. For younger players they are just a [noun] but as they grow and learn, the game grows with them. They gain a descriptor and then a special ability. When I play with my girls, we used just one blank.

We played for about an hour, which is impressive considering the attention span of my 3 and 5 year old daughters. Clara, 5, is the loud, adventurous one. She can’t really read yet but she loves books. Clara loves to perform and be the center of attention; dance, sing, tell jokes, and share stories. If you met her, you’d soon be her best friend. Olivia, 3, is a bit quieter and more reserved. She won’t perform for you unless she’s in the mood and keeps her hugs tucked safely away only for the most special of people. She enjoys books in her own way; by looking at the pictures, asking about the colors, and imitating the animals. They can barely sit through dinner and, unless some sort of screen is on, they’re usually wiggling in whatever furniture they happen to be situated, sometimes even flipped upside down. But on this night I had their undivided attention. Well, “undivided” may be a little generous but considering they were actually listening to me and engaged, we’ll call it undivided.

They weren’t really themselves sitting around our dinner table. And when I say that, I mean that quite literally. Olivia was a monster; brave, scary, strong, but friendly. Clara was a spy; quick, smart, deadly, and clever, which was interesting to me considering how loud and outgoing Clara is and how reserved Olivia tends to be. In our game, they could really be whoever they wanted. They had been begging me for days to finally dig into the box for No Thank you, Evil that I had Kickstarted quite a while ago. They’d seen the box multiple times in my game room and often asked about it. I never felt they were really old enough to understand it, let alone enjoy it. Daddy was wrong!

For my little ones I didn’t use the character sheets or stats. It was very rules light, but for the girls, that didn’t matter; they just wanted to go on an adventure. Olivia asked me several times, “Daddy, who are you going to be?”. I told her I was the Guide and that I was going to guide them on their adventure but they could go and do whatever they could imagine. I told them a little about the land of Storia, which is the magical realm only children can go to and no residents can leave (so no fear of those creatures you might meet coming back into the real world). There are four ways you can get to Storia; Under the Bed, Behind the Bookshelf, Out the Window, or Into the Closet. For this adventure they chose to go Under the Bed. 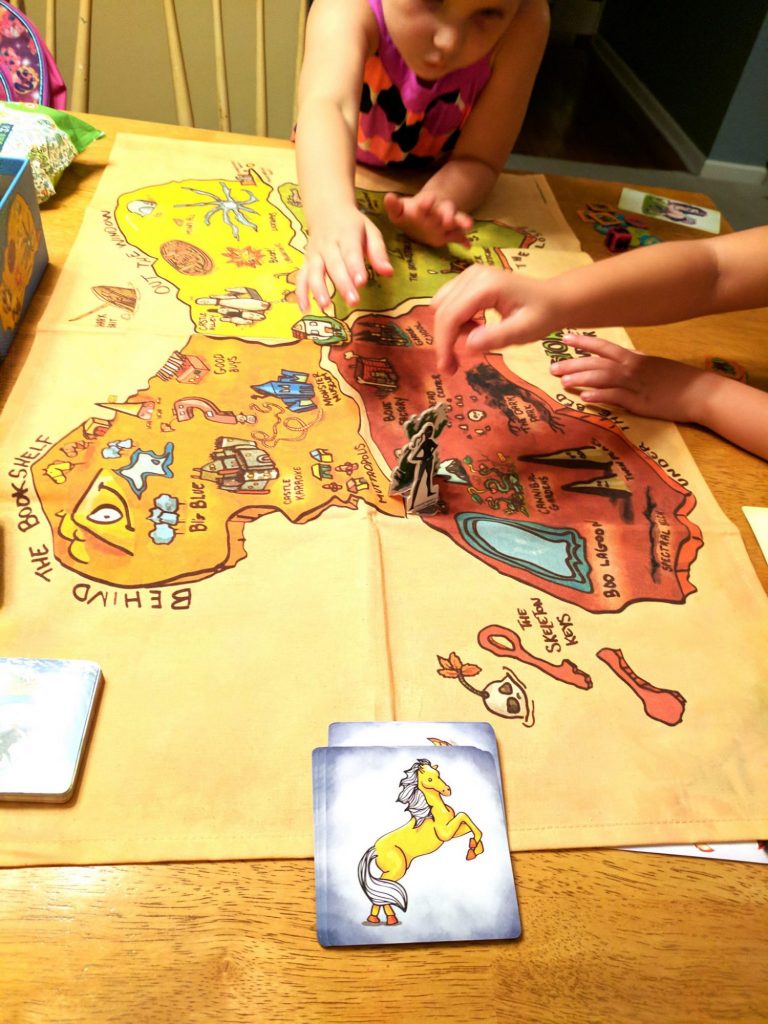 They picked a small unmarked forest on the map so there was no info in the book. That was okay with me because in the material there were print outs, monster cards, item cards, even story ideas; with people, places, stuff. The materials made leading a game with kids so easy. The girls kept asking to see all the cards because they’re so colorful and inviting but I wouldn’t let them because I needed to keep some surprises for later adventures!

As they walked through the forest, they came upon a path which led to a small town. Outside the town they saw a big wanted poster. I was able to take the poster from a premade adventure and laid it right in front of them. Their eyes got big, their mouths dropped open a little bit, and, since Clara is learning to read, I made her sound out the word. “W…A…N…T…E…D? What’s it wanted for?” And I told her they should go into town to find out! So they did.

Clara wanted to meet some people in the town so they knocked on a random door and Grammy Sammie opened up, welcoming them. Clara asked about the poster and the girls learned that The Hobgoblin had terrorized the town several days ago taking treasures, food, and the famous Air Guitar! The duo were very upset but, over milk and cookies, they promised Grammy Sammie that they would do their best to find The Hobgoblin and bring him to justice. 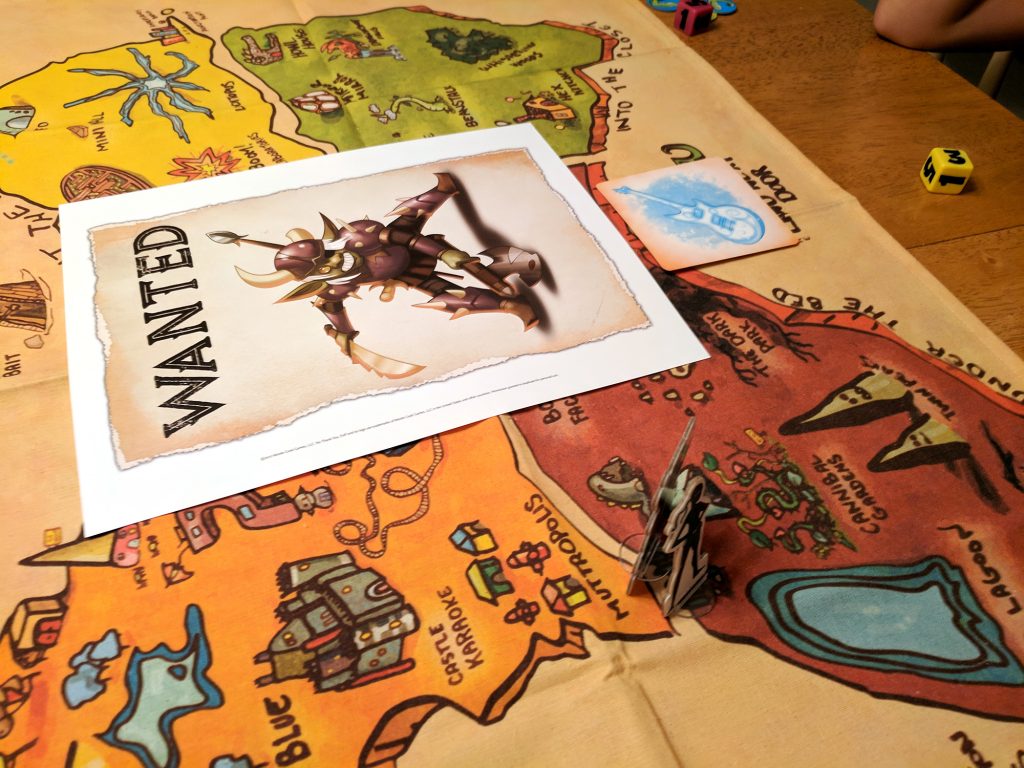 They continued to explore the town and Olivia wanted to go shopping. They stopped by George’s Grocery and had a similar chat with him about The Hobgoblin. But they also learned that the store had been robbed and didn’t have any snacks for companions.

Companions are a special friend that travel with the adventurers, each with special abilities called cyphers. You can use them once, then recharge them allowing them to gain a new ability. The companions are great for moral and emotional support.

George told them that Lucy Lawful, a talented sheriff in Storia, was in town looking for The Hobgoblin. This got them really excited because they love the book we got from the Kickstarter Lucy Lawful and the Awful Waffle. They practically have it memorized.

They left the store in search of Lucy. To find her in town they had to make a Smart roll. Tasks in this game are on a scale of 1 to 6 and you have to roll the Goal number or higher to succeed. You also have a number of different tokens; Smart, Tough, Fast, and Awesome. For the first three, if you pay a token to the Guide you can lower the Goal number by one. You can also do this by using a special skill. For the Awesome, you can pay the Guide to let someone reroll a roll. They had a Smart Goal of 3 to find Lucy. They both succeeded and found Lucy walking down the road, very upset. They asked what was the matter and Lucy recognized them! She remembered the sisters from when they helped her figure out who had taken the Awful Waffle (which is a real in game item!). The sisters were so excited that Lucy recognized them that I think it took Clara a few seconds to collect herself. 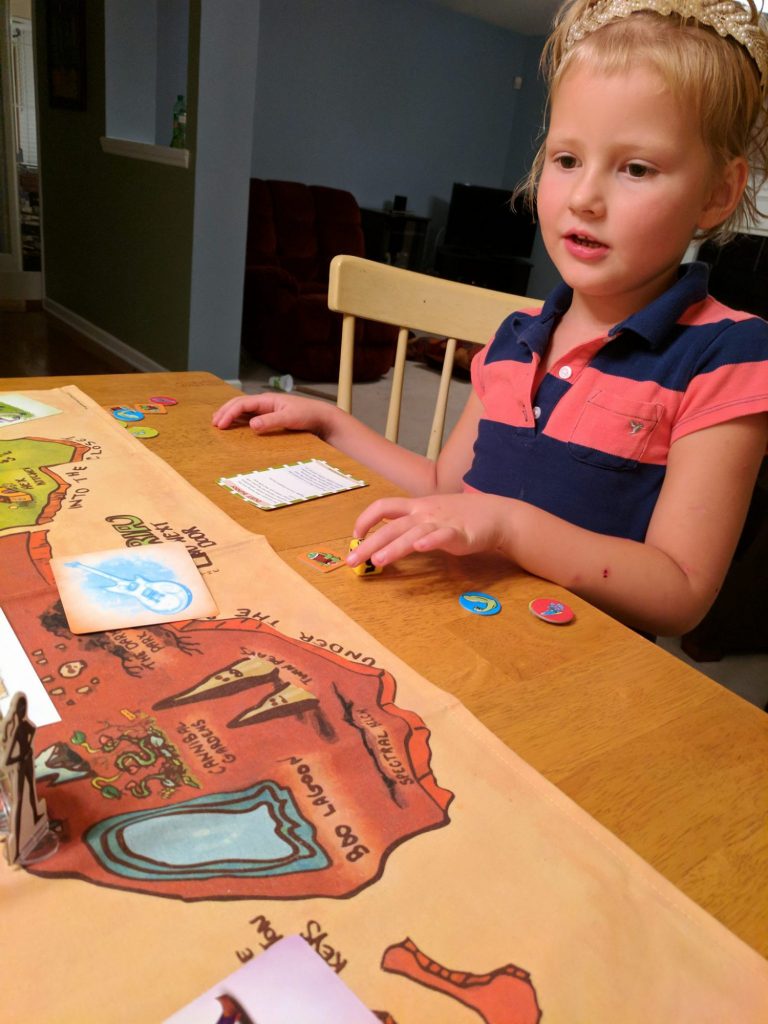 Lucy was having trouble finding The Hobgoblin. She followed his trail outside of town, into the forest. She hoped the sisters could help her find the trail and The Hobgoblin. They jumped at the chance to help. Thr sisters followed Lucy out of town to where the path ended, but after such a long day of searching, Lucy was tired and hungry. She wished the girls luck and headed back into town. Another Smart roll was required to pick up the trail. This time it was a Goal of 4. Olivia didn’t succeed and was a little upset but Clara succeeded and was very encouraging to her younger counterpart that they could do this together. Usually, as siblings go, there tends to be a lot of pushing, yelling, and wrestling, so it was nice to see them work through an adventure together.

They followed the trail and soon heard the chanting and laughter of The Hobgoblin. Clara suggested they sneak up on separate sides to surprise him. A successful Fast Goal of 4 roll later had them situated on either side of his camp, then together they attacked! The battle was intense and a little frustrating. The Hobgoblin had a Tough goal of 4 which made him hard to hit, but he also had a Fast Goal of 4 which meant he attacked quickly. The two took a few bonks (we didn’t keep hit points) but they eventually worked The Hobgoblin down and knocked him out! Clara had to spend a few of her Tough points to make it happen.

After the battle, they searched the camp. There was his pile of loot and the Air Guitar! The sisters put everything in a small cart and took it all back to town. They found Lucy and took her back to The Hobgoblin so she could lock him up. When they returned to the town they were received with cheers and applause and a local musician was rocking out on the Air Guitar playing a song just for them. They had a few last words for The Hobgoblin as he was marched away… 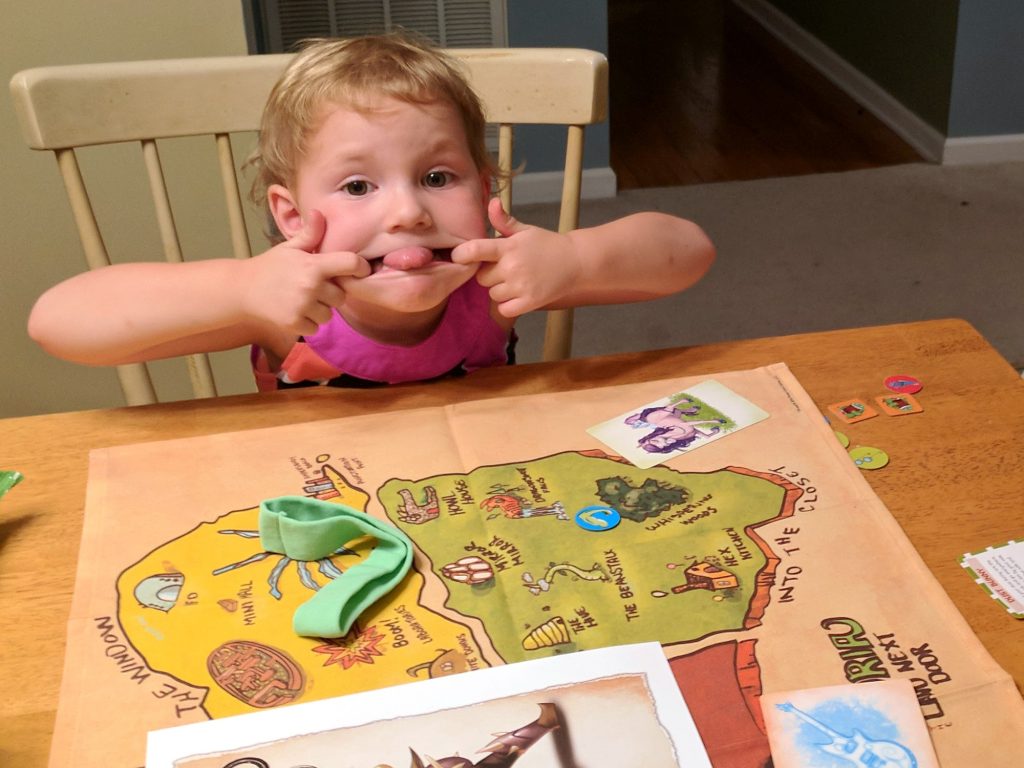 No Thank You, Evil! is a tremendous game. I improvised everything during our game but I had materials galore at my fingertips; colorful cards, a beautiful map where they could just point to where they wanted to explore, fun character standees that they could pick from, monster standees, and big bright dice to The books ar  full of ideas and tips. I made the right decision when I went all out for the Kickstarter. I recently received the expansions Uh oh, Monsters!, which has more adventures and monsters, and Story, Please!, which is an adventure building deck; more people, places, story, stuff, maps, props, and more – all in card form!

Since that game night, the girls have walked by the boxes a couple times and want to start telling stories about the creatures on the box, how’d they’d fight them or befriend them or find them. I cannot wait to explore more of Storia with my girls and slowly add in more depth of rules. It is an excellent intro into the world of RPGs with great product support and quality material. So, for me, it’s a Yes! Thank you, Monte Cook Games! 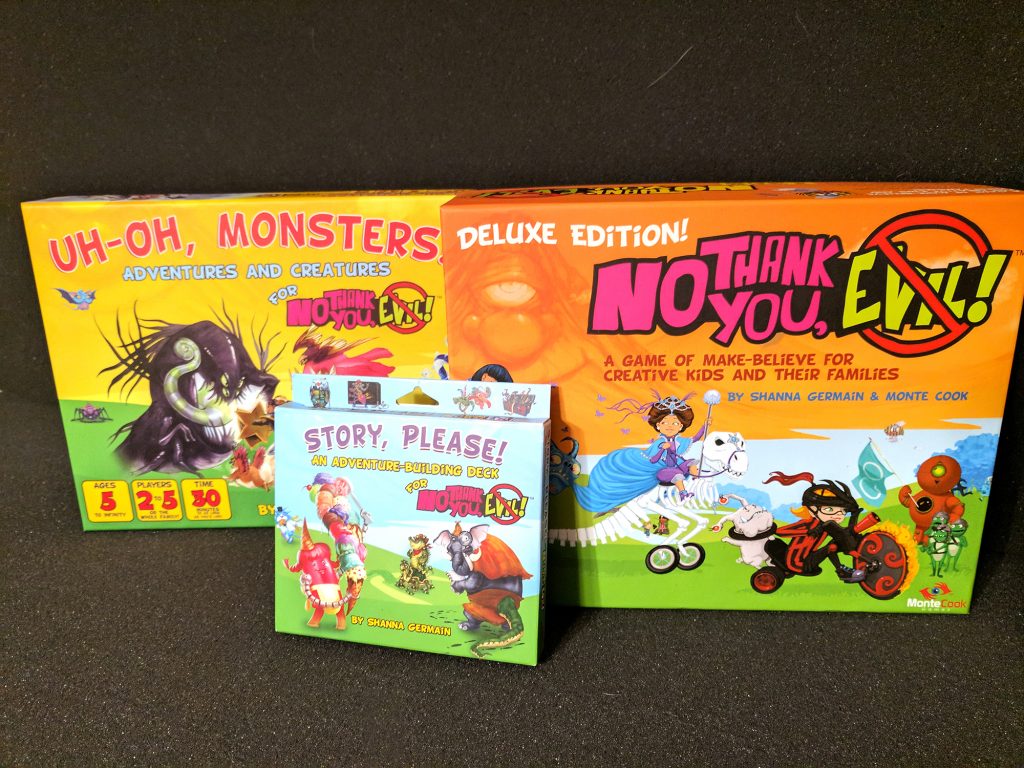 Designed by women   Diversity in gaming   RPG   Women in board games