Lovelace & Babbage – Why Didn’t the Integer Get Airplay?

Because it was unsigned.

Programming puns aside,  Ada Lovelace and Charles Babbage were ahead of their times when, in the 1840s, they wrote the first computer program. This simple program, to calculate Bernouli Numbers was the first recorded algorithm meant to run on a computer; and Ada is credited as the first computer programmer for this work. Lovelace & Babbage, the upcoming game from Artana and Scott Almes of the Tiny Epic series pays homage to the contributions of Ada Lovelace and Charles Babbage (check out our reviews of Scott Almes’ other games).

Lovelace & Babbage is a real-time programming game where the players seek to hit prescribed numbers by addition and subtraction. 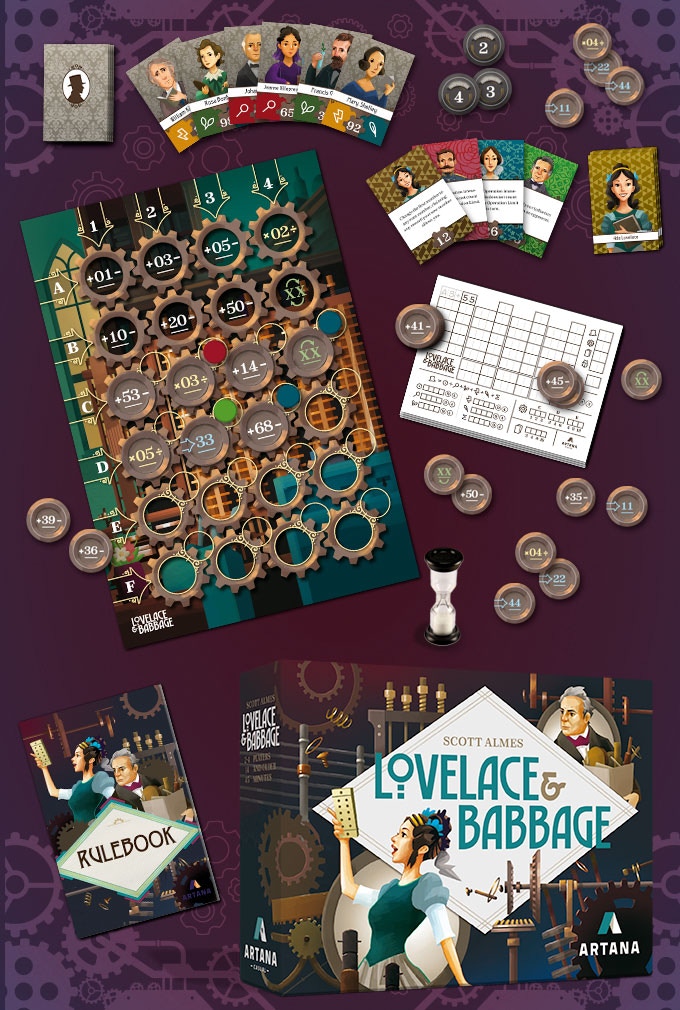 Each round centers around a Program Phase where players will have a starting number they’re working with. They’ll be adding, subtracting, multiplying and dividing numbers from the game board to hit their targets. Players will be writing locations from the player board and either a plus or minus operation to indicate the operation. For instance, if your current number is 72 and location A2 has a 2, you could write A2- and your new number would be 70. 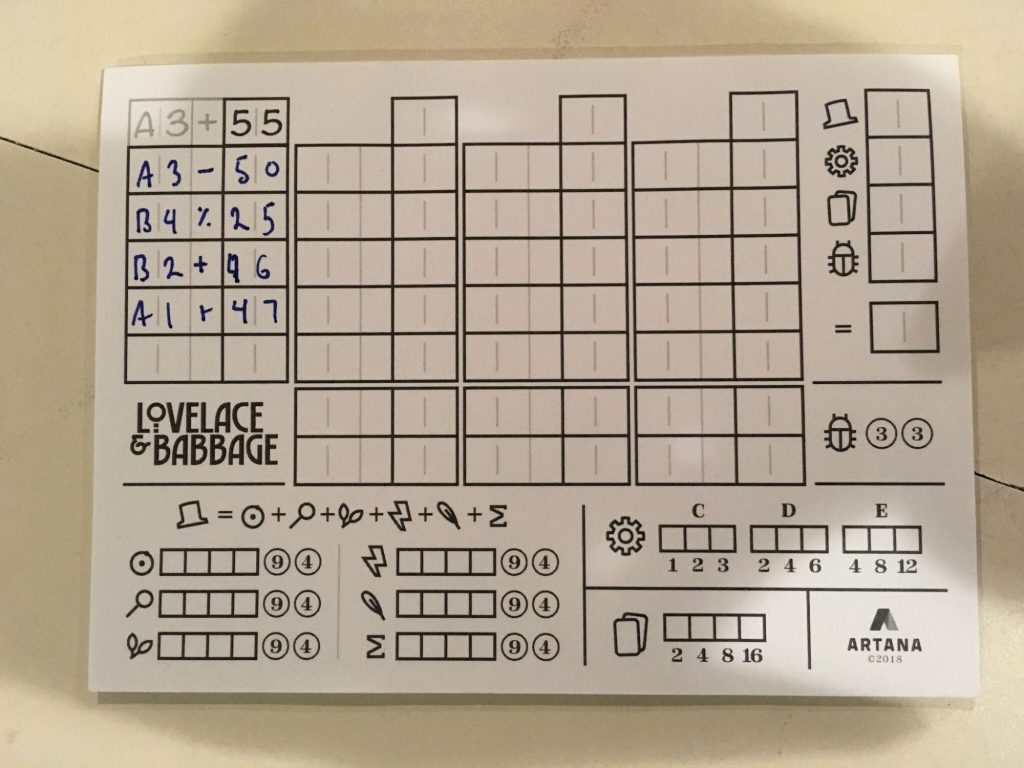 All players have a set of communal target numbers they’re trying to meet during the round and one personal target number. The programming phase occurs in real time and once one player is finished preparing her program she flips a timer and all other players have one minute to finish. Programs can consist of no more than five operations.

After the programming phase, players execute their programs in the order they finished preparing them. If a player hits a target number they receive one of the two influence types on that card which will be used for end of game scoring. The second player to reach a card can receive the other influence, and all players reaching that value will score one point. 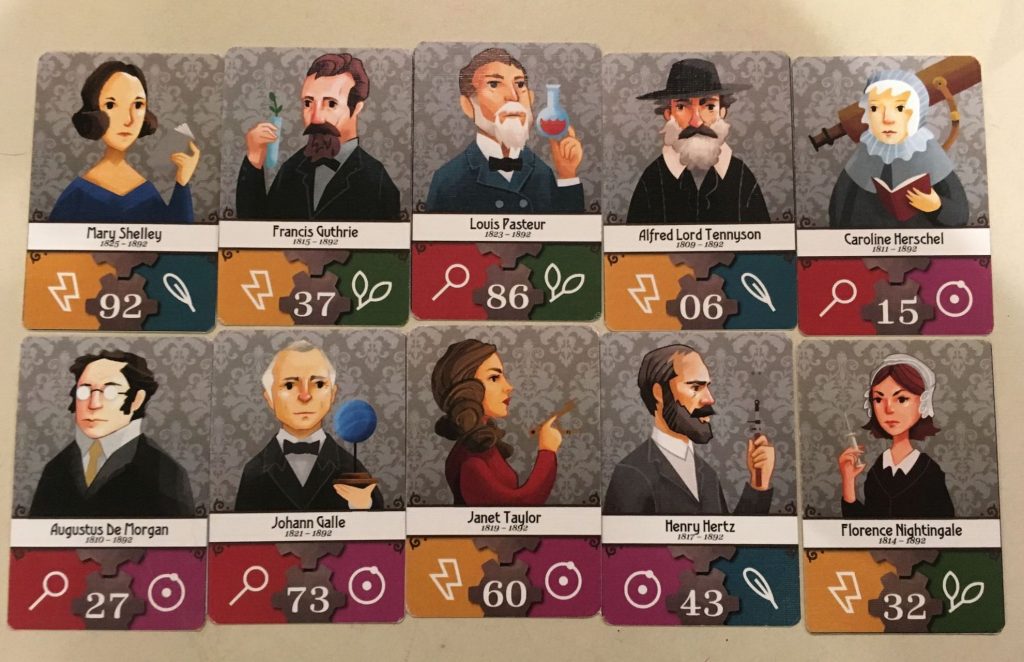 Example patron cards. The numbers on the bottom represent the target number players have to hit. The symbols on each side correspond to different types of influence.During each round you also set up one special “Subroutine” that is a personal target of yours. If you reach the Subroutine values you can activate special powers in future rounds like additional operations. This continues for four rounds and, at the end of the game, players score points for influence categories where they are in first or second place.

As someone who writes code, I was excited about the theme of this game. Sure, programming games exist, but one where you’re simulating the first programs ever really hit home for me. The gameplay is simple and streamlined – program your moves and execute your calculation. One of my favorite mechanisms in the game that I didn’t cover above is the debug mechanisms. If you ever make a mistake in your program, as I inevitably did a number of times, you can go back through and make some changes at a loss of a few points. That simple addition took away a lot of the barrier to entry for the real-time programming aspect.

Prototype card backs for subroutine cards, each player has the deck for one character.

That being said, if real-time games or math-intensive games aren’t your thing I’d recommend you look another direction on this game. The entire game consists of real-time math which was an immediate turn-off for some people in my gaming group. The math is never terribly difficult and I always played with a ‘cell phones are allowed’ rule, but trying to add 28 + 67 in real time had me making my fair share of mistakes. 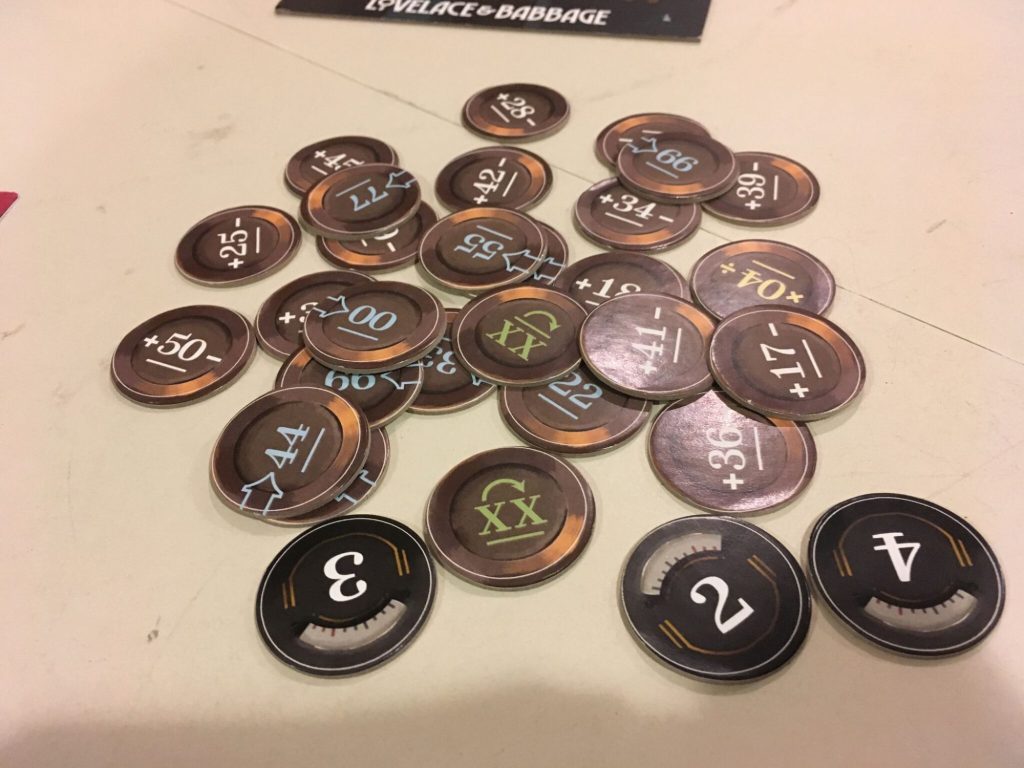 A sample of the operation pieces available in the game.

I really enjoyed Lovelace & Babbage. It fit well into what I consider a filler game of about 30 minutes. I also appreciate that this game has lots of room to grow. The simple system at the core of the game can easily be expanded and new mechanisms and forms of interaction can be added in to keep the game fresh. I’m excited to see what comes for this game on Kickstarter.